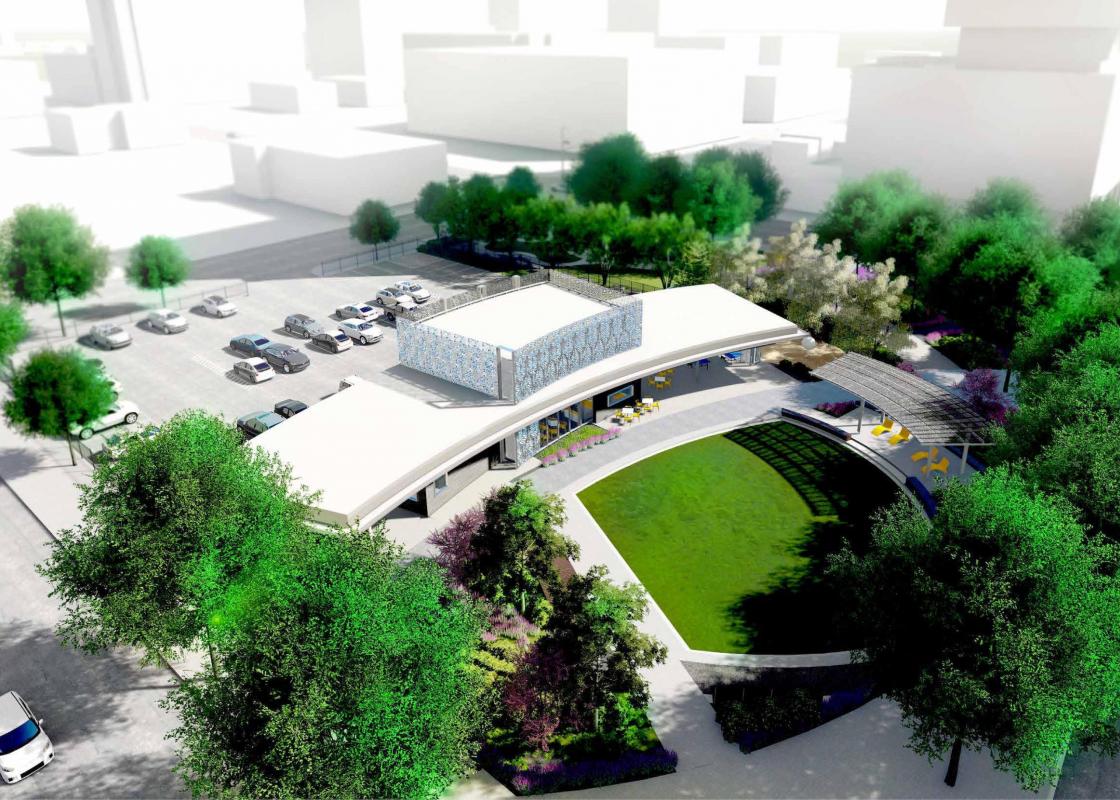 Ernesto Alfaro is a Senior Associate at SLA Studio Land where he works in planning and landscape. He is also a Lecturer at Rice University.

On April 30, the Downtown Redevelopment Authority (DRA) held a press conference on the ninth floor of Houston House for the unveiling of renderings and a concept plan for what is being called the Southern Downtown Park. The name is temporary, but the intent to create a lasting sense of character for this Downtown neighborhood is not. Lonnie Hoogeboom (Rice Architecture ‘96), Director of Planning, Design, and Development for DRA walked the assembled audience of residents, stakeholders, and guests through the main talking points, the need and relevance for the park, etc. He turned over the explanation of the park itself to Lauren Griffith, the well-respected landscape architect whose firm has played a significant part in the creation of the other two major recent parks in Downtown: Discovery Green and Market Square Park. Her presentation was clear and compelling: the park acts as much needed green space for the neighborhood that is emerging here. It has all the right elements: large and small dog parks, contemplative gardens, a flexible-use lawn space, a restaurant with indoor and outdoor seating, bike racks, and a small children’s playground. But the most interesting element is one that has not yet been finalized: an art program with three distinct locations for “long-term temporary” sculpture that will double as pedestrian safety barriers. While the use of planters and bollards has become a common place and sometimes not-bad-looking approach to protecting people walking and on bicycles, there is no other urban park in Houston, or perhaps the country, with such a potentially bold, progressive use of art in its design schema. And, because neither the art nor the artists have yet been selected, this program piece was mentioned only in passing. Indeed, the the overall design is only in its schematic phase --- there is much more work to be done before the final plans are complete. But there is a real possibility that this innovative design approach could set this park apart and be the condition that enables a sense of place.

The team that Mr. Hoogeboom and DRA has assembled is certainly qualified and up to the task of creating the kind of “third space” that Downtown needs. Lauren Griffith has the wisdom and experience of having worked on two significant downtown parks already. Ms. Griffith, a Houston resident since 1981 and alumna of Texas A&M, took the lessons learned from those projects and has distilled a more nuanced and balanced approach at this site, which is the smallest of the three parks: only three-fourths of a block. Encircled by Fannin, Bell, San Jacinto, and Leeland Streets, the limited space makes for challenges in providing different types of landscape areas. But her firm has accomplished it well enough, even if the park may appear to share too much of the language of the other Downtown parks. The contemplative garden, with its quiet water feature (by Waterscape Consultants) appears as a “calming, resting oasis” with multiple access points and vegetation low enough that there is no sense of being cut off from the street --- an important element in creating the perception of safety in a park. With its drift of Live Oaks that meanders through in a curvilinear fashion, the park will offer adequate shade. The deciduous trees in the dog park will allow for the warmth of the sun to enter in the winter months, and ornamental trees at the lawn area will add the punch of color that will pleasantly frame that periphery. Once again, as in the case of Discovery Green and Market Square Park, the inimitable non-profit agency, Project for Public Spaces, had a hand in the development of the program of the park, ensuring that there is enough for the multiple constituents of this emerging neighborhood. While some planners and lay people alike may consider PPS's approach to be excessive (do we really need a puppet kiosk and a shuffleboard court and a putting green?), the end result is a park that has a little bit for everyone, and the public nature of the space, on the whole, is better. It was not so long ago that downtown Houston was a sea of parking lots punctuated by skyscrapers. Any amount of green space is an improvement, but there is still more work to be done, and this park is a small step in the right direction. In some ways, Houston is in the midst of a return to the kind of park-building spree that the city enjoyed in its early days, through the landscape architecture firm of Hare & Hare, that gave us our signature green spaces of Memorial and Hermann Parks. New spaces like Levy Park, Buffalo Bayou Promenade, and Emancipation Park are examples of our changing urban face, but the demand for green spaces is higher still - one need only look at the overpopulation of Discovery Green and Levy Park on any given weekend to become aware of this fact. As is so often the case, PPS advocates for an oversaturation of program elements in order to “activate” a park - make it feel lively, relevant. A very straightforward manner to accomplish this is through a food program that can draw visitors at different times of the day.

The architect of the restaurant is Gensler, whose approach here is both sensitive and appropriate. The 2,400-square-foot building is wrapped in a perforated screen that will be internally illuminated by lighting consultant Gandy2 Lighting Design. The night-time effect will be that of a lovely lantern or beacon that will softly illuminate the park, and give it warmth and a sense of safety. Architects Ryan Marchesi and Dawn Arcieri, of Gensler, pointed out that the outdoor seating area of the restaurant has the ability to be closed off to create a secondary indoor area - and, further, that this area can be opened to the main indoor space to allow for a truly large enclosed dining area, which would be ideal for special events. Total seating capacity of 94 (56 indoor, 40 outdoor) is something that Angie Bertinot, DRA's Director of Marketing and Communications/Retail Development, said was a lesson learned from Market Square Park --- more seating, and a more flexible approach to seating. The restaurant operator has not yet been selected, but Bertinot added that it would be someone who would be able to offer breakfast, lunch, and dinner. All of the above makes for a park that could be anywhere --- and that's not a knock. It has the ability to become the polite, friendly oasis that DRA, the sole entity responsible for financing the park, clearly wants it to be. The truly remarkable component is the deployment of an art program that does much more than add an aesthetic dimension. Laurette Canizares, Programming and Events Manager for the Houston Downtown Management District, indicated that the sculptures selected might be installed temporarily, but could remain for a longer time frame than the typical month or so that can be seen around the city. It is possible that they could remain for up to 12 months, then changed. This means that a central component of this park is that it could function as an outdoor gallery, constantly changing, constantly offering something new. While this project is not intended to be a destination park (a la Levy Park or even Discovery Green), this dynamic element would offer Houstonians a reason to keep returning. It becomes a hybrid condition: a neighborhood park that could demand return visits because of its changing nature, in terms of both its botany and its art. Adding this unique condition --- and it really is something unprecedented in Houston --- to the jam-packed elements of the design, allows for the creation of what Ms. Bertinot affectionately calls, “the sticky neighborhood stuff” that would foster a unique character to the area. This is the essence of creative placemaking, that much maligned moniker that refers to the way that art (and yes, a park can be art) can create meaning in space. By offering something different, the park begins to resonate in the minds of the people who visit it. They create emotional connections to the place (I felt so calm, I loved seeing that sculpture), that in turn, begins to turn the park into a memorable experience, almost like a person that you know, that you love to be around. This is how the sense of place becomes manifest in the city --- and it is no small feat. We will have to wait until March 2021 to see if the DRA, its design and construction team, will have achieved that goal. 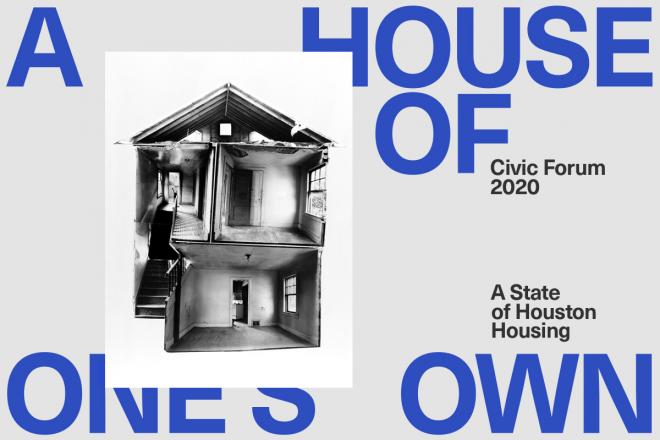 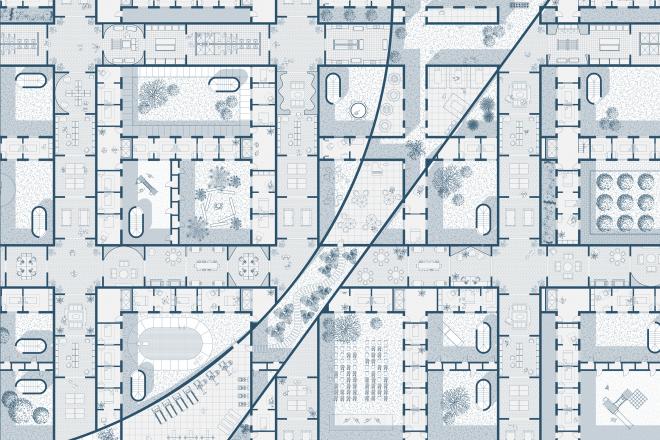 All Form is Political: A Conversation Centered on Housing 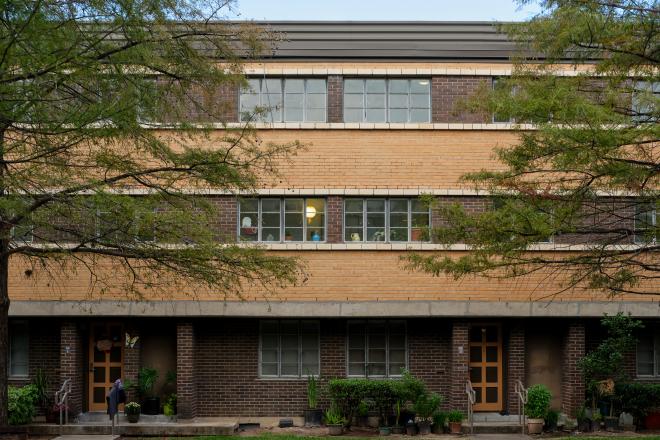 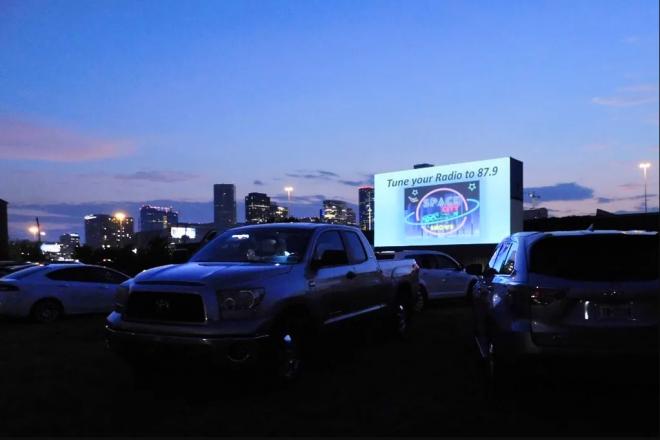 Spaced Out at the Drive-In