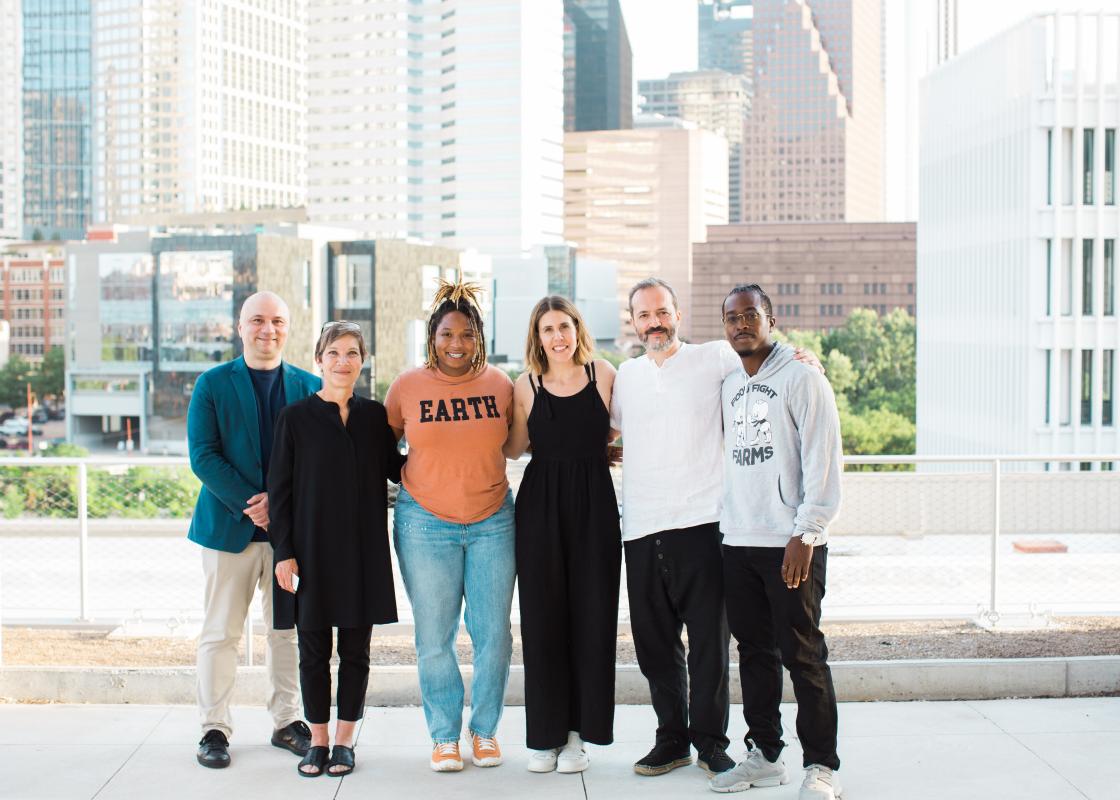 Land. Though the Rice Design Alliance Civic Forum focused on the problem of food inequity, the lively panel discussion was ultimately about access to land. As moderator Lynn Peemoeller, a food systems planner at the Sam Fox School of Design & Visual Arts at Washington University in St. Louis, said in her introduction, “Access to land among other things means access to the ability to produce food.” Land was a theme Peemoeller and all four panelists returned to often. 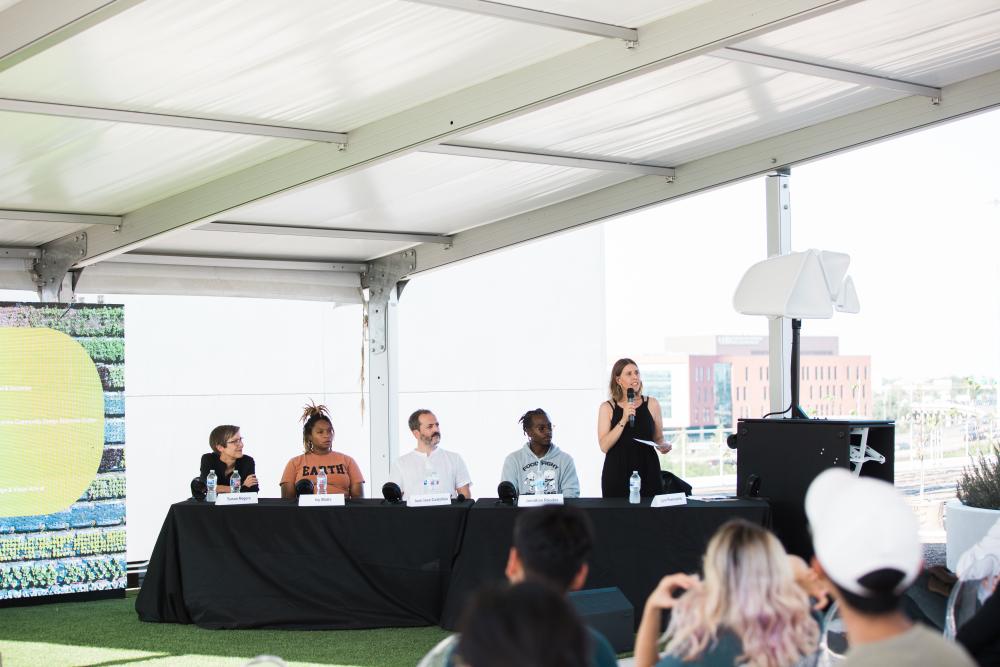 On a blustery, warm evening on the roof of POST Houston, the newly remodeled and repurposed Barbara Jordan Post Office, Peemoeller began her introduction by acknowledging that the building was on land that was once home to Indigenous people. “The land acknowledgement is important because it’s a reminder of how land passed from Indigenous to nonindigenous control,” she said.

The land where POST Houston stands was once home to the Karankawa, who migrated between Gulf Coast regions and the land that became Houston. Around the area’s bayous, the Karankawa harvested freshwater clams, hunted deer and bison (when the buffalo herds made it this far south), fished, and foraged wild roots and tubers. However, starting in the 1820s the land was taken by white settlers, who often used enslaved Africans to clear and farm the region.

As Houston grew exponentially before and after the Civil War, farmers, many who were German and Italian immigrants, developed a rough ring of farms around the city. As the Houston area continued to grow throughout the 20th century, those small-scale, family farms were replaced by suburban homes, strip malls, and large retail developments. (The Galleria mall was once the site of vegetables farms owned by Italian immigrants.) But even with these farms, Houston never relied solely on locally grown food. Since its founding and due to its role as a port and rail hub, the Bayou City has imported (as well as exported) food. Those imports increased as area farmland disappeared. “Our food typically comes from places where we cannot see the person who is actually making it,” said panelist Jonathan Rhodes, CEO/president of Food Fight Farms and Broham Fine Soul Food & Groceries and former chef/owner of Indigo. 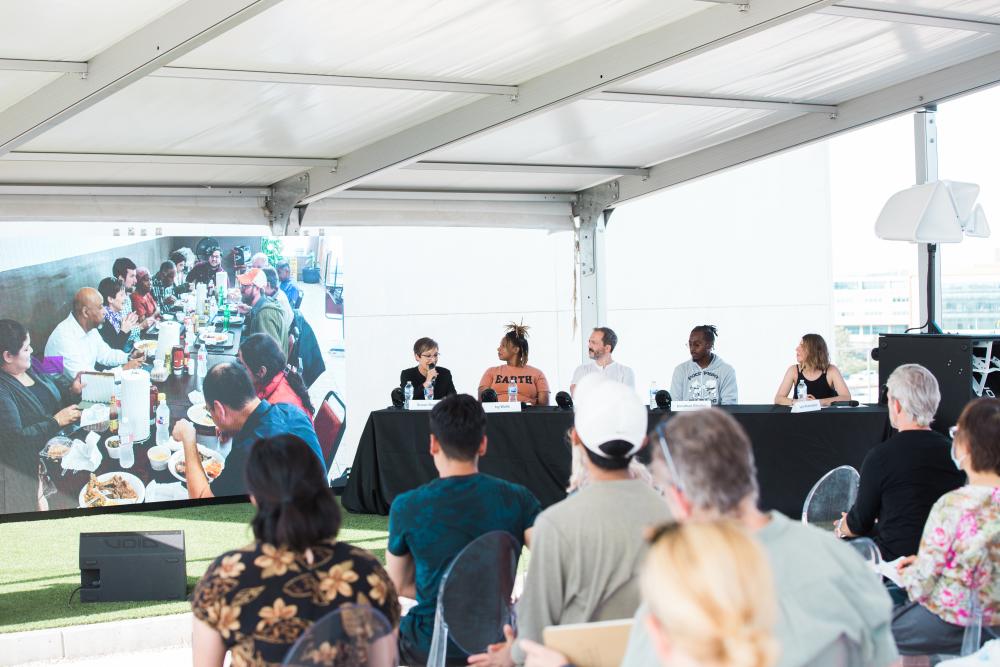 These changes in agriculture have been productive but inequitable. “We can all recognize that it is a sad paradox in this country that there is so much abundance yet simultaneous hunger affecting millions of people every day,” Peemoeller said. She noted much of this is due to systemic racism and discrimination. Citing a paper published by American Economic Association’s Papers and Proceedings journal, she said, “African American farmers lost approximately $326 billion dollars of farmland in the 20th century because of discriminatory practices at the federal, state, and local levels.”

According to Peemoeller this discrimination has continued because of disinvestment, restrictive covenants, and political structures that impact food access. These have led to a system that enforces a food apartheid.

Susan Rogers, associate professor at the University of Houston and director of the Community Design Resource Center, detailed how food apartheid has affected the city. “In Houston, 500,000 people live in a USDA-designated food desert, which is defined as a low-income census tract where a substantial number of people don’t have access to healthy and affordable food, and one out of every four children in our city lives in a food insecure home,” she said.

These inequalities have forced some to find creative approaches to reclaiming Houston-area land for agriculture. Rogers provided what she called an “incomplete inventory of what is happening across our city to fight food inequality:” micro-farms that have sprung up in places such apartment complexes and front yards; insurgent farms being planted “where no one is looking such as unused utility easements;” an abundance of community gardens being cultivated around Houston; and a number of urban farms such as those supported by Plant It Forward that are growing produce for the marketplace. 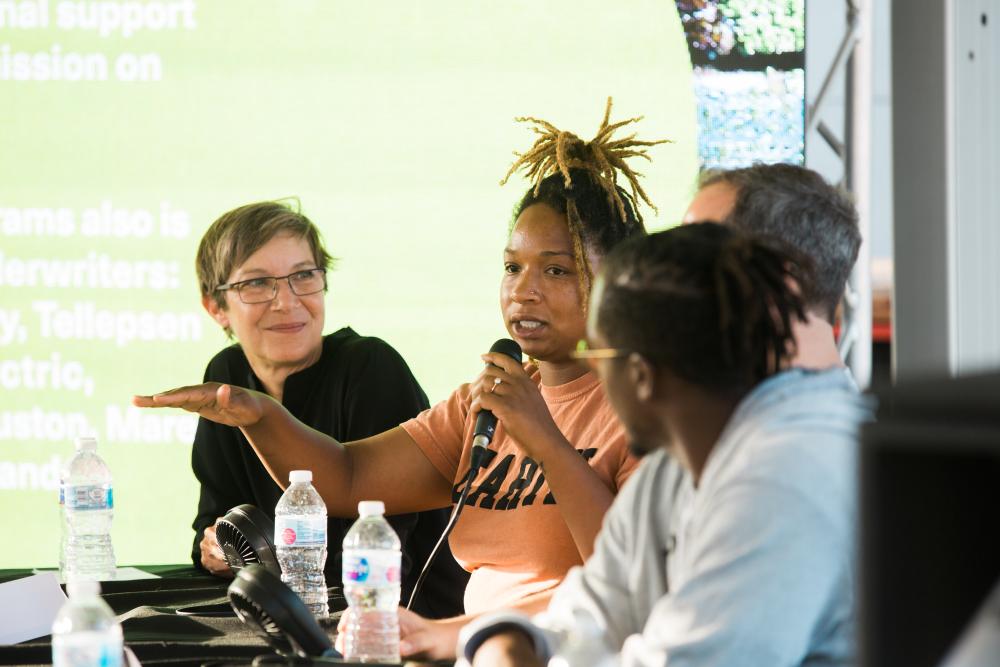 Rogers went on to list potential places were this insurgency could expand, “In Houston, over 250 miles, about 3000 acres, of utility easement could be farmed.” In addition, flood mitigation could lead to what she called “agrigation,” a process in which flood buyout land is converted to farmland. She also noted agriculture can be incorporated into community planning, schoolyard gardens can be expanded, and farming could take place on vacant lots and public lands such as transit centers and parks. “We should be looking everywhere. We need new economic models for food production and distribution and how resources are allocated,” she said.

One of those developing new models is panelist Ivy Walls, founder of Ivy Leaf Farms and cofounder of Black Farmer Box and Fresh Houwse Grocery. After moving from Pearland to Sunnyside, an underserved, predominantly Black neighborhood in south Houston, she noticed that there were only two grocery stores, a Fiesta and a Watkins Supermarket and “lots of gas stations that proxy as grocery stores” to service a community of around 20,000 people. During her presentation, Walls pointed out the stark difference between those two stores in Sunnyside and the numerous groceries in predominantly white Clear Lake. “Sunnyside is primarily a Black neighborhood where you have to travel outside the neighborhood to find fruits and vegetables or deal with what little you can find in the neighborhood,” said Walls. 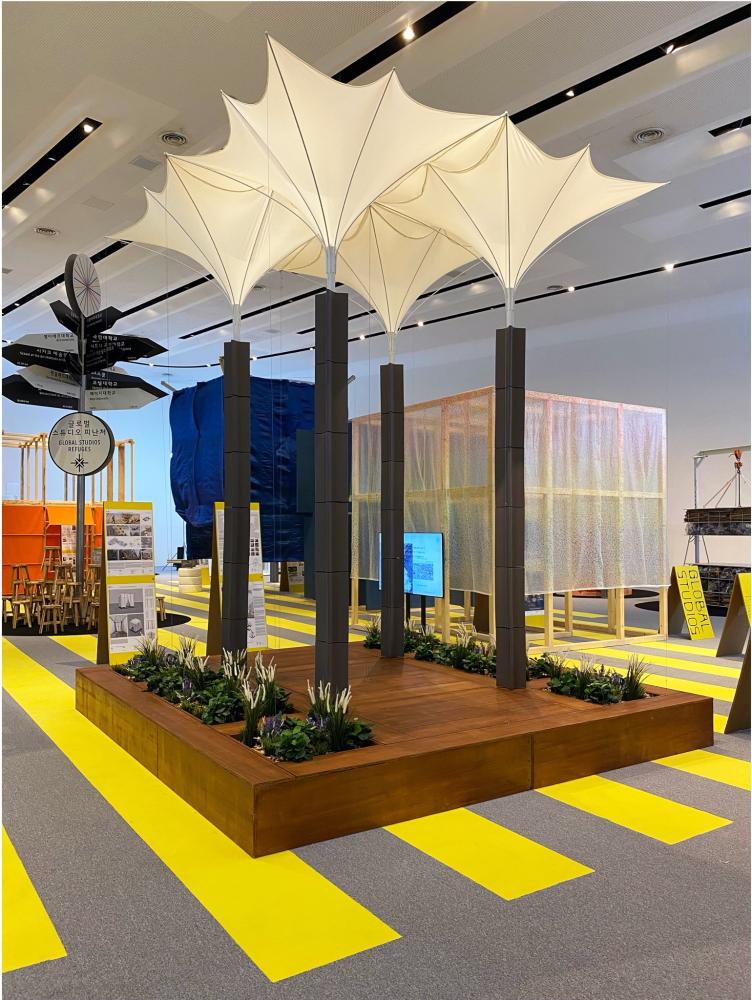 Walls began addressing these disparities by sharing produce she was growing with her neighbors. She eventually left her career in epidemiology to return to her roots (she grew up on five acres of land) and work full time at Ivy Leaf Farms, which is located in the nearby Minnetex neighborhood. With fellow Sunnyside resident and farmer Jeremy Peaches, she started Black Farmer Box, a project that collaborates with other Black farmers and makers to create a CSA. The two are also pairing up to open Fresh Houwse Grocery, a brick-and-mortar market in Sunnyside that will work with Black farmers and makers to sell fresh produce and culturally appropriate products.

These two projects along with the farms integrate both production and distribution. This approach addresses multiple concerns. “We can sell produce and make sure the farmers get the prices they deserve,” Walls said. It also allows them to service several parts of the community. “There are people who can support and purchase, people who are just making it in the middle, and people who have a greater need. So, when creating our food system, it was very important for us to hit every single target. By selling to those who can afford it, we can make sure everything we produce at the farm is free to those in our neighborhood who need it,” said Walls.

Juan José Castellón, assistant professor at Rice Architecture, is creating land where it didn’t exist. Inspired by the trees he loves in Houston, he has teamed with Rice engineers and industrial partners to develop Circular Prototypes: Food, Energy and Water (F.E.W.) Rooftop Infrastructures. In this project, Castellón is reconnecting “with our material world and natural environment by merging architecture and agriculture, design and engineering” to develop a modular rooftop water collection system that might help solve Houston’s water consumption problem. According to Castellón, Houston consumes 150 gallons of water per person per day, “more than other cities like New York and Shanghai and far more than Mexico City or Amsterdam.”

The dynamic structure uses a lightweight membrane that resembles a forest canopy to funnel water into hollow ceramic columns that then feed a series of planter boxes, where vegetables could be grown. The system could also provide energy-saving cooling for urban heat islands. Though designed for rooftops, these structures could also be adapted for spaces such as bus stops and parking lots and could help with flood mitigation. 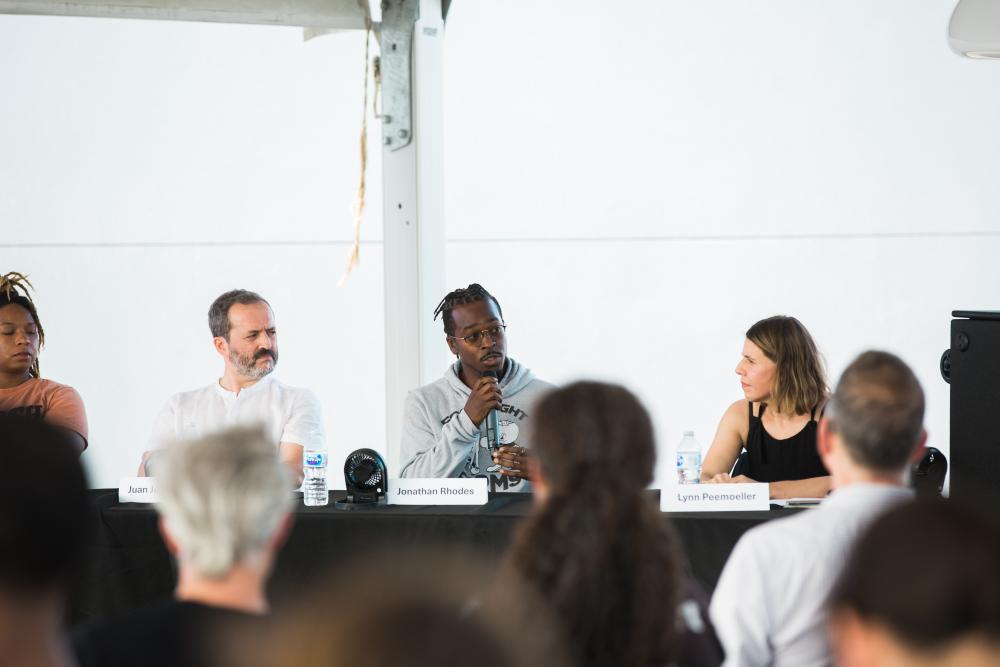 Rhodes, like Walls, designed Food Fight Farms and Broham Fine Soul Food & Groceries to service his home neighborhood, which is Trinity Gardens in northeast Houston. But he thinks projects like these aren’t enough. “Cheap labor and free labor are what make food affordable. It’s not growing the food that’s the problem, it’s the lack of people being involved in the process of growing the food that’s the problem,” he explained.

Rhodes advocates for more radical action that begins with individuals making significant changes. “Toxic consumerism is what is driving the problem. There is no policy that can change that, only us,” he said.

For Rhodes, this direct action meant making personal sacrifices and closing his restaurant. “I was willing to sacrifice my restaurant, which was making a lot of money at $225 per person with low overhead. But what is it worth if my neighbor is willing to break into my restaurant simply because they don’t have access to food?” he said. “The way to solve that issue is for everyone to have their own land and the free will to choose how they eat, how they produce, and how they store their food,” Rhodes said.

Whether that is feasible in the near future or how that would work was beyond the scope of this forum, but Rhodes also stated, “We need active engagement.” The forum participants both exhibited that active engagement and challenged the audience to do the same with their informed discussion.