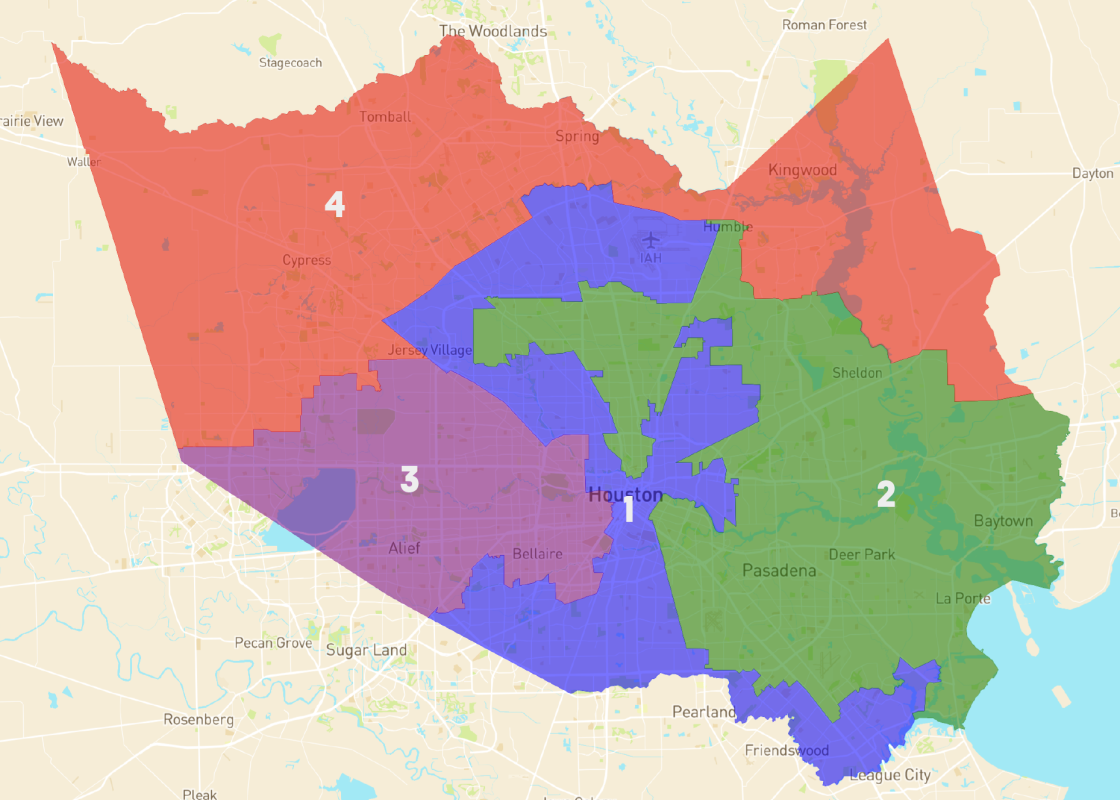 Shirley Ronquillo is a resident and community organizer in East Aldine. A first-generation immigrant from Ecuador, Ronquillo and her family moved to the East Aldine area in 1980. Her home is in a different district in Harris County than her neighbors’. This separation impacts her community’s ability to advocate for flood infrastructure needs. Ronquillo has seen firsthand the importance of the imaginary, arbitrary lines enacted by redistricting.

With the release of local US Census data after the 2020 Census, the redistricting process is underway at almost every level of government. Updated every ten years, new maps determine in what districts our votes count and which candidates we can vote for. The manipulation of this redistricting process is gerrymandering, as districts can be reshaped to serve political interests. This has serious implications for our democracy, which is why it is addressed in the John R. Lewis Voting Rights Advancement Act. Across the country, both state legislators have gerrymandered districts to preserve their power, especially after the green light in the Supreme Court’s 2019 Rucho v. Common Cause ruling. The elimination of the Voting Rights Act’s preclearance provision has also emboldened state legislators to crack and pack communities of color. In Harris County, we had the opportunity to combat these trends and advocate for transparency and fairness in the redistricting process.

In Third Ward, Ken Rodgers has seen the impact of a process that has historically left local communities out of the conversation. “We know what’s going on,” notes Rodgers, seated outside Blackshire Elementary where he runs Operation Love, an annual Christmas fair. “Redistricting draws lines arbitrarily, watering down our vote, that’s just the bottom line,” he says. Rodgers has seen what happens when divisive district lines hamper the ability of Third Ward residents to advocate for funding, better schools, and access to healthy food and healthcare. 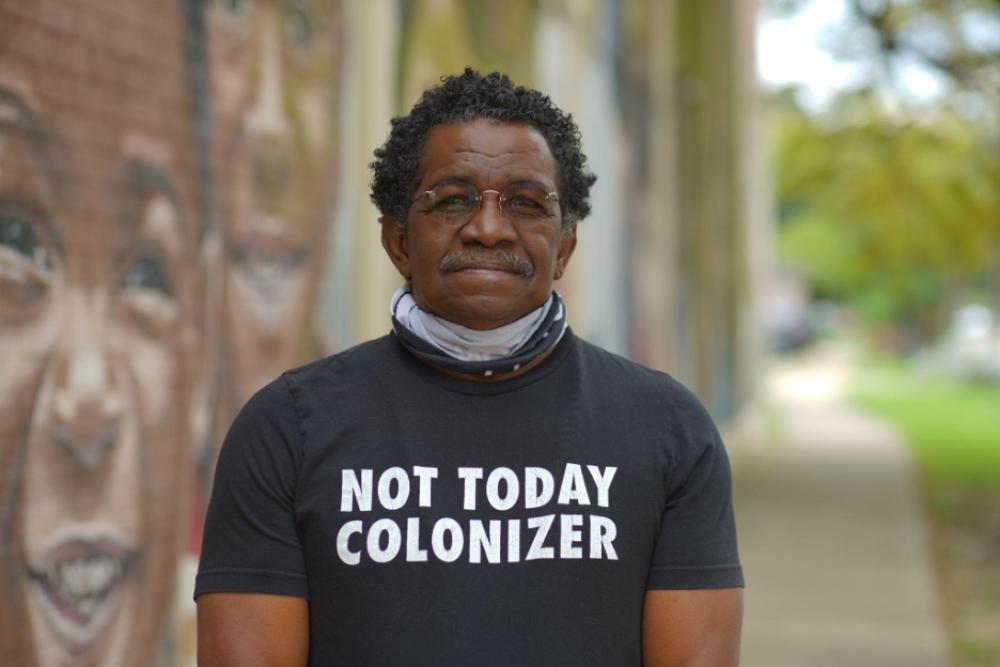 For generations, elected officials have regularly distributed power via redistricting without public input, dividing communities of color and weakening their voting impact. This practice damages our ability to shape the systems and services meant to support us by making it difficult to elect representatives who align with our interests and needs. Whether it is a Texas Senator or Harris County Commissioner, the person we elect will represent us, those in our district, and the issues affecting our communities. That is why these lines matter and why communities must not be divided.

Since the last census in 2010, the population of Harris County has increased by more than 638,000, particularly among Asian, Black, Latinx, and Native people. Still, our state leadership ignores pressing issues that so many of these communities face: state leaders refuse to fix the electric grid or focus on the health and economic recovery of Texas and our county, for example. This neglect affects millions of Texans: if Harris County was a state, it would have a larger population than half of the existing states in the US.

In Alief, Amatullah Contractor works for the Muslim-American advocacy nonprofit Emgage. Throughout the fall of 2021, Contractor spent many hours testifying before elected officials at the state and county levels. She advocated for redistricting that would fairly represent the growing Asian community in Harris County. Despite being one of Houston’s fastest-growing populations, the political power of Asian communities is diluted with the current map, a problem that Contractor will be working to address for the next ten years.

To create districts that keep communities together, Houston in Action, alongside member organizations Mi Familia Vota, Pure Justice, OCA-Greater Houston, and Emgage Action worked to demand that Harris County provide a fair and transparent redistricting process and allow regular people to participate along the way. This coalition engaged in a collaborative mapping project where regular people defined where their communities are, their mutual interests, and what is valuable to them.

To offer solutions, member organizations mapped a total of forty-three communities of interest with leaders throughout Harris County. Meetings happened virtually, with community leaders and organizers using mapping technology to show the very real communities Houstonians define every day. Community members self-identified shared concerns of culture, history, and policy, and contributed to a district map that represented communities fairly, neither diluting any population’s voting power or dividing a community of interest.

After months of work, the result is the Comm(Unity) Map, which shows four districts for Harris County that unified communities.

Houston in Action and members prioritized protecting communities of interest while ensuring that the map proposal met both federal and local legal requirements. The map took into account the many issues that communities face and have in common, like over-policing, lack of investment in educational and social services, immigrant rights, infrastructure issues (e.g., flooding), food deserts, houselessness and unstable housing, pollution from toxic release facilities, affordable healthcare, high-crime areas, natural and manmade disasters, tenant issues, and mandatory buyouts. These are issues that don’t discriminate based on race.

Critical to the success of this process was the groups’ ability to take a unified stance against historical efforts to use this process to pit communities of color against one another. Instead, the groups created opportunities to highlight key issues shared by communities across racial lines.

Houstonians have lived through Winter Storm Uri and Hurricane Harvey. All of us are affected by air pollution and the effects of institutional and systemic racism. The Unity Map was a culmination of the voices of everyday people fighting for fair representation in part to mitigate the effects of systemic injustice. 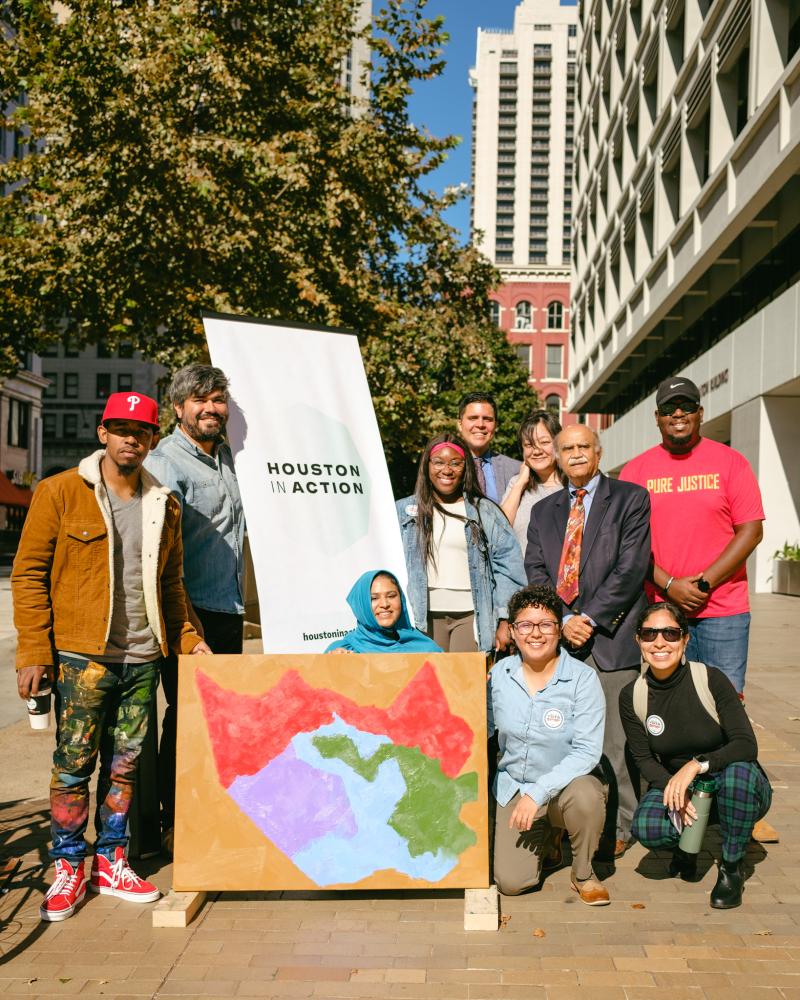 In the last week of the maps being decided, the groups negotiated final changes to our Unity Map, undergoing a busy and lengthy process. The groups met with all of the Commissioners Court offices to argue for the Unity Map. The groups were also analyzing and responding to the new maps that the Commissioners Court offices were proposing daily. If the groups drew lines to include a certain number of people, then they had to shift lines for other districts. The coalition held countless Zoom meetings and phone calls to negotiate final changes on the map and to craft the narrative around the map.

Throughout, these groups did something that had not been done before: they brought together different groups from across Harris County to work on one map that represented the interests of their communities. Rather than being divided, communities of interest joined together to argue for their representation.

This excitement carried over into the Commissioners Court meeting on Thursday, October 28, 2021, when the final vote for the district maps was held. That brisk morning, the multiracial collective of community organization representatives, who had met with dozens of community leaders to hear from communities of interest and proposed district lines that would give regular people a voice in Harris County politics, held a press conference outside the court building to advocate for their map. The Court voted to approve a map that was very similar to the Unity Map in many ways. Regrettably, in the commissioner precinct with the most Asian voting age population, its percentage decreased from 13.5 percent to 12.7 percent. Overall, the Unity Map coalition has successfully impacted what can be a partisan, technical process in order to represent Harris County residents and low-income communities.

For Ronquillo, Rogers, Contractor, and millions of Texans in Harris County, this public engagement sets the stage for new leaders who represent and fight for the needs of historically marginalized communities. Ultimately, the proposed and approved map put one Commissioner up for re-election in 2022 rather than in 2024 and concentrated the voting power of communities of color in southwestern and western Harris County.

Redistricting maps should not be a partisan issue. Instead, it should be about fair representation in service of a functioning democracy. The work of creating a Unity Map focused on centering regular people in Harris County who deserve to have a voice in the decisions that affect their daily lives.

Watch a video produced by Houston in Action about this effort here.

Amatullah Contractor, Texas Deputy Executive Director of Emgage Texas; Roshawn Evans, Co-Founder and Organizing Director of Pure Justice; and Marla Lopez, Houston Coordinator for Mi Familia Vota Education Fund contributed to this article. These organizations are members of Houston in Action and were leaders in the Unity Mapping initiative to ensure fair representation in the Harris County redistricting process. Juan Cardoza-Oquendo, Ally Smither, and Chris Valdez also contributed to this article as staff members of Houston in Action.