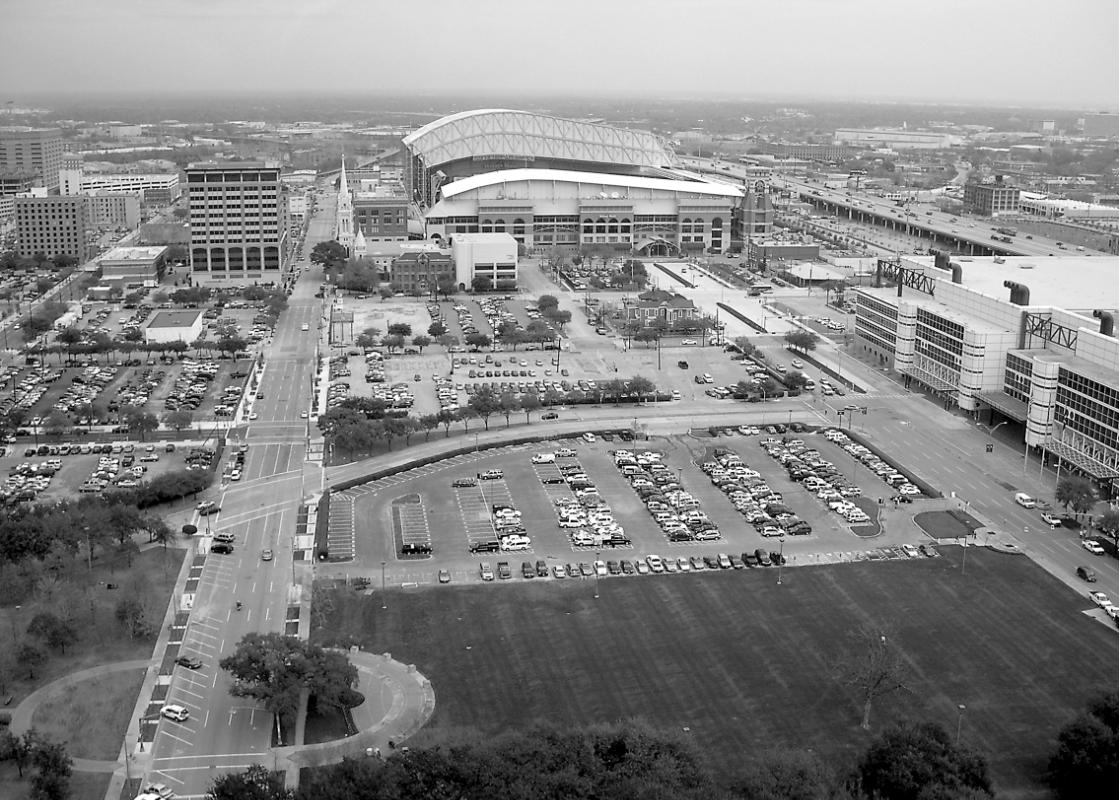 Discovery Green at Ten Years: An Interview with Barry Mandel

Barry Mandel is President and Park Director of Discovery Green. Andrew Albers is Chair of the Cite Editorial Committee and Vice President at OJB Landscape Architecture. This edited conversation took place ahead of the tenth anniversary celebration of the park.

Andrew Albers:As the Discovery Green website has a detailed history of the park with extensive figures about its impact, I'll just read the first couple of sentences, Discovery Green "is a beautiful, vibrant 12-acre park in the heart of Downtown Houston that opened to the public in April 2008. The park was envisioned by several committed Houston philanthropists, who saw the space as a once-in-a-lifetime opportunity to create an urban park that would redefine the landscape of Downtown. In less than four years, the site that became Discovery Green was transformed from an undeveloped, concrete eyesore into a beautiful and vibrant destination adjacent to the George R. Brown Convention Center." The figures on how much Discovery Green has proven to be a catalyst for the transformation of Downtown are remarkable.

Barry Mandel: I don’t think anyone saw it coming. I’m a native Houstonian and we were told never to go Downtown when we were younger. This concept of recreating Downtown was completely foreign at the time. What has happened since then has been nothing short of amazing. You see it when the development on the west side of the park occurred in its first five years with Embassy Suites, One Park Place, Five Houston Center, and then the Hess Building. Then you see the development that has happened in the last three years with the expansion of the George R Brown, the Partnership Tower, and the Marriott Marquis. All of those combined are about $1.2 billion in new construction as a result of this park.

AA: As Discovery Green turns ten, and the park and the city have matured around it, what are the major changes and how has the park responded?

BM: It is twofold. You had the Downtown Living Initiative. All of a sudden we had this sprouting of a residential community in and around Downtown. Then with the expansion of the Convention Center, especially with the restaurants that have now been opened, you are starting to see nightlife happen on this side of Downtown. Until recently, conventioneers left the area in the evening to try and find food or entertainment. Now they are staying in the area because it provides them with food and entertainment. We are having to alter some of what we do to take that into account. We are programming and leaving the park open a little later.

AA: Do you collaborate with the neighboring properties?

BM: We collaborate with all of them on everything. We never forget that we are a neighborhood park. While Discovery Green has gotten international accolades, the reality is that we are a neighborhood park. We have people who are visiting all around us. We have people that are living all around us. We are constantly monitoring the type and sound levels of the activities we do around here, as well as trying to assist the convention center in bringing new people and conventions. There are regular neighborhood meetings and we meet every week with the convention center. 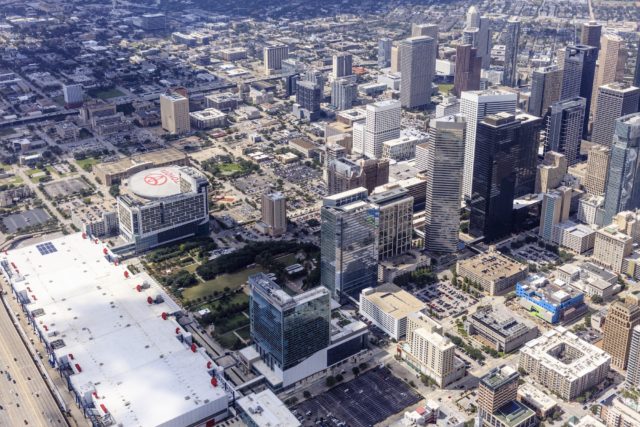 AA: Do you have a feel for how much the number of visitors to the park has increased from all this additional development?

BM: The assumption was that we would see half a million people per year when the park first opened. We are averaging about 1.2 million a year. We saw 1.2 million during the ten days of Super Bowl. We are just now settling into [a routine with] no big events, no big sports stuff. We are definitely experiencing a change with what’s happening across the street at the Convention Center.

AA: What are the challenges that Discovery Green has faced with maintenance due to the heavier use?

BM: Stuff wears out much faster than they assumed it would. That’s number one. A lot of the materials we have here are custom made. The lead times are longer to get certain things fixed. Grass is always an issue for us. You only get to plant grass the first time the first time. That was the only time it had enough time to take root. Now every time we replant, we reopen as fast as we can. The demands on the park necessitate that. 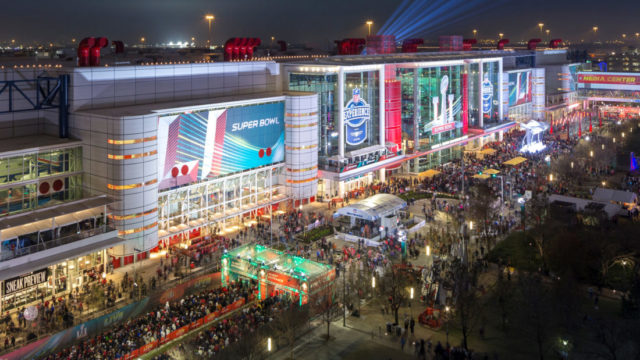 AA: Do you have any lessons learned about design elements that worked well and what didn’t work as well?

BM: It is really amazing how well-designed this park was (Hargreaves Associates, Page, and Lauren Griffith Associates). You see it especially on those large events like the Super Bowl and the NCAA where they activate every inch of this park. You can see how well this park was laid out.

There is nowhere near enough storage. We have to do a lot of that off site. There are not enough bathrooms. They keep telling me you will never have as many bathrooms as you will need. We are adding women’s restrooms.

We are probably going to redo the playground. It has the heaviest utilization of any place here in the park. I think the lighting is the other part. The tree canopy has grown so much it is covering a number of the light fixtures. There are new ways to light public areas using LED lighting that weren’t available back then.

We get a lot of folks in the area, nationally and internationally, asking what you would do differently. I would say water elements are a huge attraction. They attract kids, kids bring adults. Food is a big attraction. You have to be able to create those things --- food, shelter, bathrooms --- that people need to stay for an extended period of time.

AA: There is a change in the way we use the cities. There are people committed to living less of a private-car-centric life. Does Discovery Green encourage people to bike, walk, and take public transit to the park?

BM: Absolutely. You are going to see that happen out of necessity as more and more of these surface parking lots develop. There will be less and less parking for folks. We will all have to concentrate on other ways to get here. We are always pushing out other ways to get down here than your car. We have the bike racks, BCycle docks all around, and bike lanes that surround the park. We are within two blocks of the light rail lines. We are pretty well situated for people to be able get here.

BM: We are committed to participating in any way that the other participants see or need help. We are part of that committee. I don’t think there’s been a formulated concept of what will happen if and when that cap goes over the 45 project. It will be a completely altering situation for the city and especially Downtown. It gives us a really unique opportunity. The challenge is going to be the short timeframe that it is on right now with the Texas Department of Transportation. With the development of all these new parks, the redevelopment of Market Square Park, Emancipation Park, Levy Park, Buffalo Bayou Park — people kept saying, aren’t you worried it will take people away from y’all? No, it hasn’t. It hasn’t at all. It has given people more access to green space closer to home. It hasn’t had an impact on our numbers at all.

The park was not built with the vision that it would be ground zero for these huge sporting events. We are going to need some large public gathering space if we are going to continue to attract large sports events to this city. These surface lots that we used during Super Bowl, ultimately they will be developed. We need something close to the Convention Center and the sports stadiums that can be used for large events like that.

AA: The surface parking lots for most of the year serve a specific purpose as parking, but during these big events they are acting as ancillary gathering space?

BM: We had five lots that were used between Austin and La Branch that were incorporated into our footprint. One of them is now being developed. There went that one. It will happen. The NFL kept saying to us, there is no other city that has a campus like we have where there is a convention center for their fan fest and a green space for their outdoor concert, all of which are bookended by big convention hotels. It is a huge asset. It gives us a competitive advantage over other cities. We can’t lose that.

BM: I think it is great. I think it is a great way to create unique public space. You have to be able to raise the money for it. People just assumed that we were a city park and that we were getting city park funding. We don’t. We have about $2.5 million that we have to raise every year for the programming at the park. That is an ongoing challenge. We are trying to start this year on our tenth birthday with a membership campaign so there is a message delivered that we are not a city park and that we need your money. Our green needs your green. The third is no matter what the size of your gift is, it’s going to matter. If everyone who went through here just gave me five bucks, I’d have my budget more than covered. These public-private partnerships are great. It also has the necessity for the community to be involved longer term.

AA: Nationally, public-private partnerships have faced criticism for a variety of reasons (1, 2, 3, 4, 5). One criticism is that there is not the same level of transparency and democratic process you would have for a public park. What are your thoughts on these concerns?

BM: We had the same process [as public parks would]. Discovery Green started initially with community input. Then the group of five [founders] traveled the country, looking at best practices, whether it was Millennium Park or Bryant Park. And then the design. They went through a Request for Proposals (RFP) process, not only for the park and its design, but also for its restaurants. [The process] may be expedited a little bit in the public-private partnership (PPP) realm as opposed to the city realm.

AA: What are your thoughts about the city’s investment in parks and green spaces?

BM: I think the conventional wisdom was that when the budget was tight, cut funding to parks and libraries. I think now the consciousness of the community has been raised, not just from an economic standpoint but from a health and the exercise standpoint, and the communication of communities coming into contact with one another. I think there is now an elevated standard of what enhances the quality of life in a city. Green space is becoming a permanent part of that discussion.

AA: Over the next five years what would you like to see accomplished at Discovery Green?

BM: I would like to see our profile as high as it has been. That has challenges. You have to continually find better programming. That takes time and dollars to do. It is now part of our DNA. You have to continually find better art work. Not only to highlight the tastes and talents of Houston but also to bring other things that are maybe outside of the country. Our community is a complete mix, that fruit mix, I think Discovery Green will continue to be the epicenter for the next ten years for not only creating it here but bringing it in.

Do Nothing Without Intention