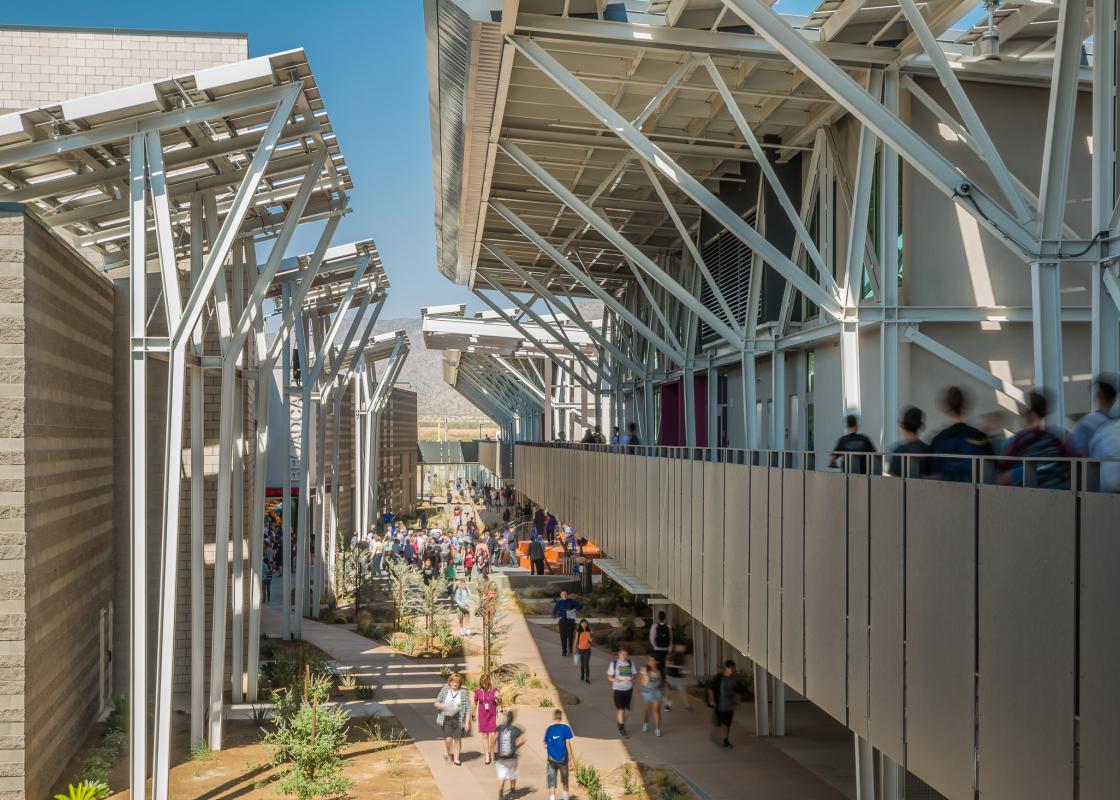 The changing requirements of educational space are just one part of the crisis we face as a result of COVID-19. In the fourth and final in a series of articles about COVID-19 and educational space, Arizona-based writer Nora Burba Trulsson reviews Canyon View High School, designed by DLR Group using some of the principles they address in their prior texts. Read Part One, “Changing Paradigms in Educational Space,” here. Read Part Two, “COVID-19 Offers an Opportunity to Right Inequities in Education,” here. Read Part Three, “New Educational Environments for New Pedagogies,” here.

On the far western edges of metropolitan Phoenix, between the craggy forms of the White Tank Mountains and the constant thrum of fighter jets at Luke Air Force Base, former agricultural lands sprout real estate signs instead of alfalfa and cotton. Today, clusters of subdivisions bloom amidst old fields and horse ranches, freeways snake through, and big box stores rise. The population booms. 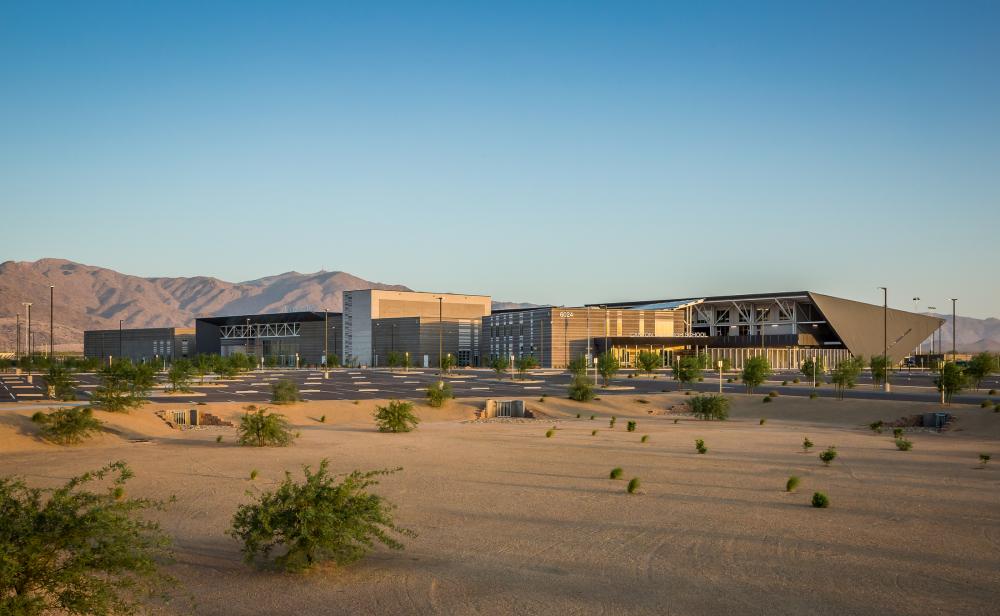 Against this backdrop, Agua Fria Union High School District built a new school. The facility is designed to alleviate crowding in the four older high schools that serve the fast-growing communities of Buckeye, Avondale, Goodyear, Litchfield Park, and Waddell. But Canyon View High School, which opened in 2018, isn’t a cut-and-paste project. Instead, its design and purpose make it one of the most unique schools in Arizona, if not the country.

“This school is really an exploration of what teaching and learning looks like in the future,” explains David Schmidt, a principal in DLR Group’s Phoenix office and the lead architect for Canyon View. “Its design is intentional, meant to encourage discovery and collaboration.”

Set on a sixty-acre site, the two-story, 237,000-square-foot school’s $76 million price tag was largely funded by a 2015 bond and monies from the Arizona Schools Facilities Board. Remarkably, this is not a charter or magnet school in an affluent suburb, but a public school in an area that’s socioeconomically diverse—the school’s population is 45% Hispanic, 45% Caucasian, and 8% African American; a third of the students qualify for free or reduced lunches. Meant to engage the surrounding community, the school’s brick-and-mortar manifestation is the result of intense planning and visioning by school leaders, students, community members, government agencies, and the design team, which included DLR Group for architecture, interiors, and engineering; and Logan Simpson of Tempe, Arizona, for landscape architecture.

“Agua Fria’s Superintendent Dennis Runyan—who just retired—and Canyon View’s Principal Phillip Nowlin pushed to make this the best high school in the country,” explains Taryn Kinney, a principal in DLR Group’s Austin office, who worked with a team to help implement the school’s innovative uses. “This was a model project, led by people who wanted to reimagine the high school experience.”

As part of the design process, Schmidt, his team, and the school’s leadership toured other innovative schools across the country and visited businesses like Google’s Silicon Valley campus. “Google’s campus design is intentional with its wayfinding, layout, streets, communities, and placement that encourage ‘positive collisions’ between employees,” Schmidt explains. “It influenced how we planned the school—more like a workplace than a traditional educational facility.” 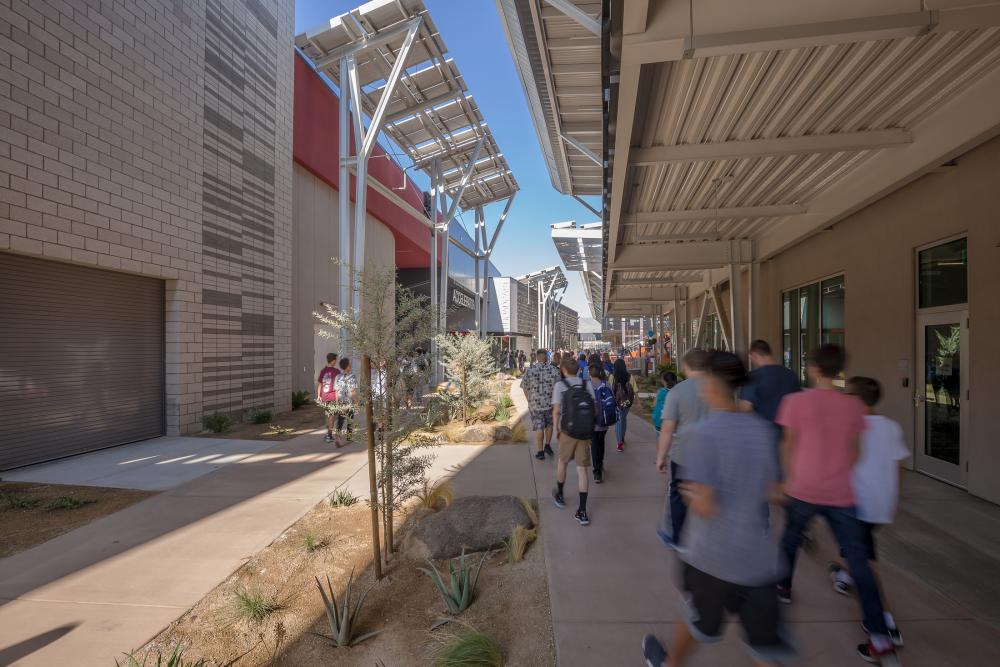 The visioning, tours, input, and design charrettes resulted in a multi-building campus set on an east-west axis. Each structure is connected by a meandering, shaded outdoor pathway dubbed the Agora, referencing the public open spaces of ancient Greece. “The Agora is designed around how students circulate,” says Schmidt. “It’s like a river, with small eddies where students can gather in between classes.”

To the north of the Agora, four buildings of steel construction house the school’s “forts”: separate structures for freshmen, sophomores, juniors, and seniors. The term isn’t militaristic, but references “the sheet and pillow forts kids build,” says Schmidt. “Those are changeable and moveable.” Indeed, the forts are one of the school’s most innovative, flexible areas. Core teachers do not have assigned classrooms. Instead, they rotate through a series of reconfigurable spaces with glass walls that can open and close, partitions that can reduce or expand capacity, and curtained spaces for quiet study. Each fort also has a flexible lounge area for students to use on their own initiative. Each fort also has a teachers’ lounge that includes desk space for computers, lockers for personal belongings, a small kitchen, and soundproof phone rooms for calls. The setting encourages teachers to mingle and collaborate several times during the day. 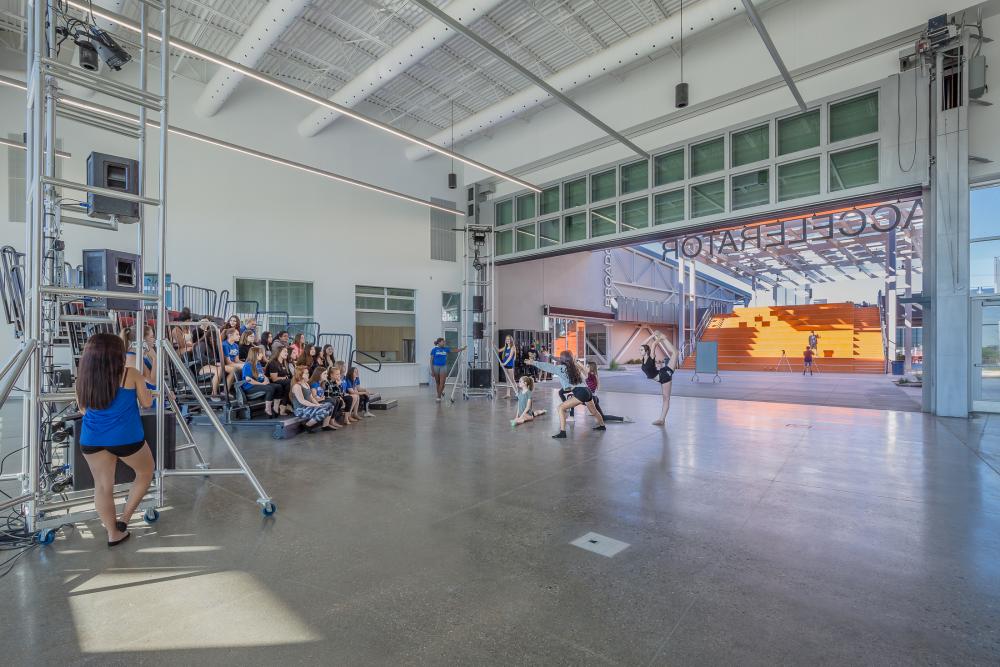 On the Agora’s south side, masonry buildings house administrative functions, music and art, and physical education. The heart of the school’s design, however, is the central “accelerator,” which includes the auditorium and prop shop, a pre-function space that opens to the outdoors via airplane hangar doors, a broadcast studio and lab, the information technology center, and a massive outdoor staircase—painted vivid orange—used for everything from classes and lunchtime gatherings to concerts and talks. “Part of the mission of the school was to connect to the surrounding community,” explains Schmidt, “so the theater and pre-function areas can be used for concerts, plays, talks, and exhibitions. There’s also a separate entrance and parking area for after-hours events.”

Other classrooms were designed for the school’s STEM curriculum and Career and Technical Education (CTE) pathways, such as agriculture, where the space has access to an outdoor garden and greenhouse; and sports medicine, located adjacent to the locker rooms and sports fields.

While the school functions and flows in new ways, it is also filled with design details, some subtle and some not. Fibonacci sequences can be found in the patterns of the blocks in the masonry buildings, notes Schmidt, and the solar panels on the shade structures are placed in patterns that denote animal DNA sequences, starting with simple creatures like worms near the entrance and, deep in the school, becoming more complex to denote mammals. At the front of the school, an angular, protective metal skin folds over one side of the fort buildings, shielding it from bright morning sun. Indoors, bright colors denote fort levels, and boldly striped carpeting links classroom and study spaces. The furnishings, modern in form and saturated in color, are on wheels and moveable. In the cafeteria, circular tables replace the standard picnic-style seating, eliminating lunchtime pecking orders. Outdoors, the sparser landscape at the edge of the school is a nod to the nearby desert mountains, while the Agora is flanked by lusher planter beds embedded with granite boulders, which discourage trampling. 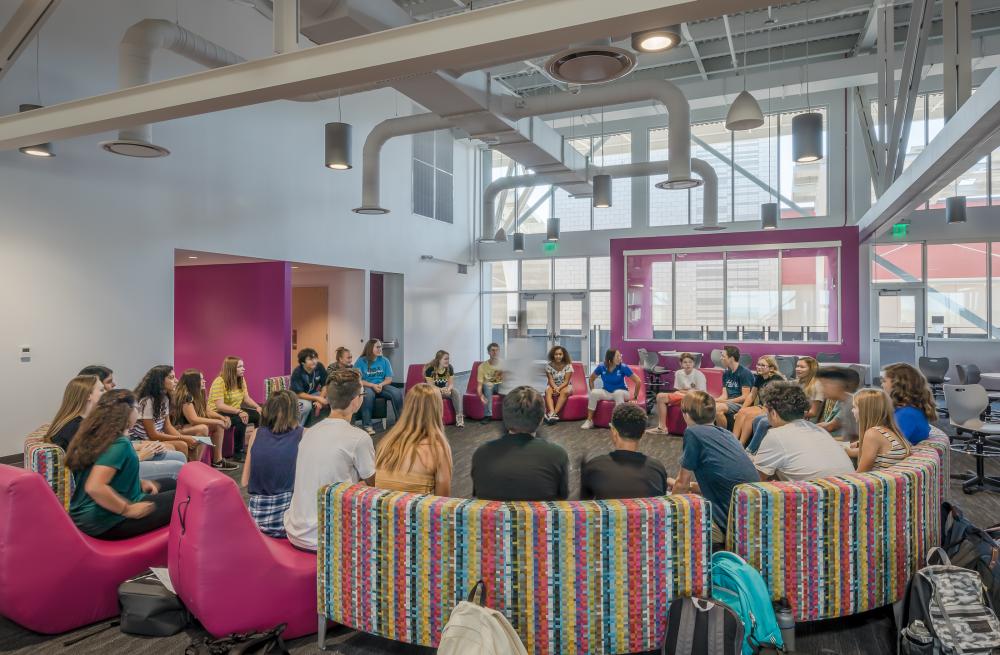 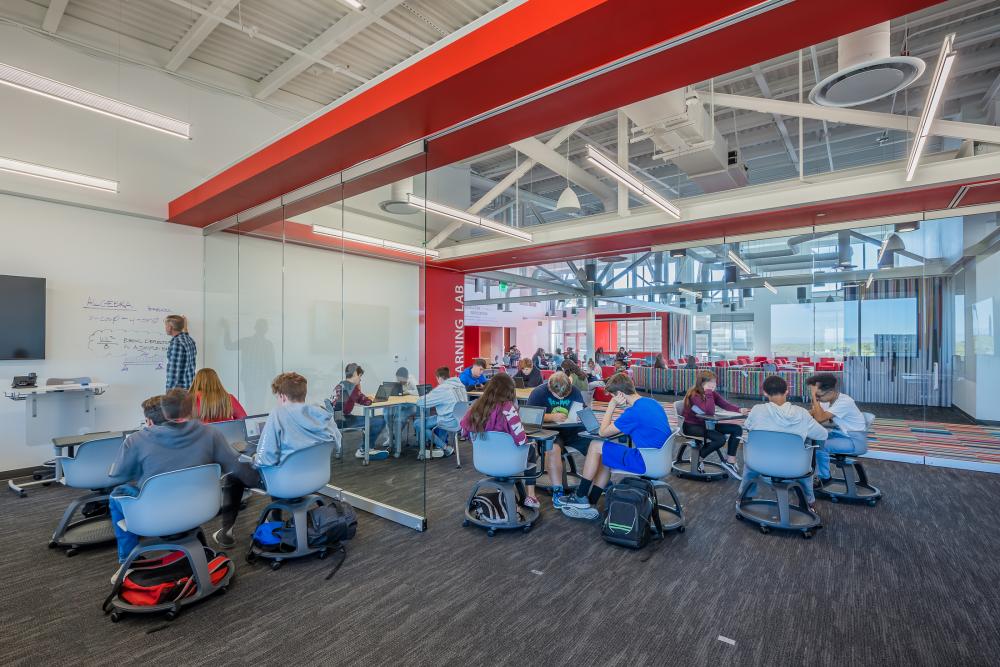 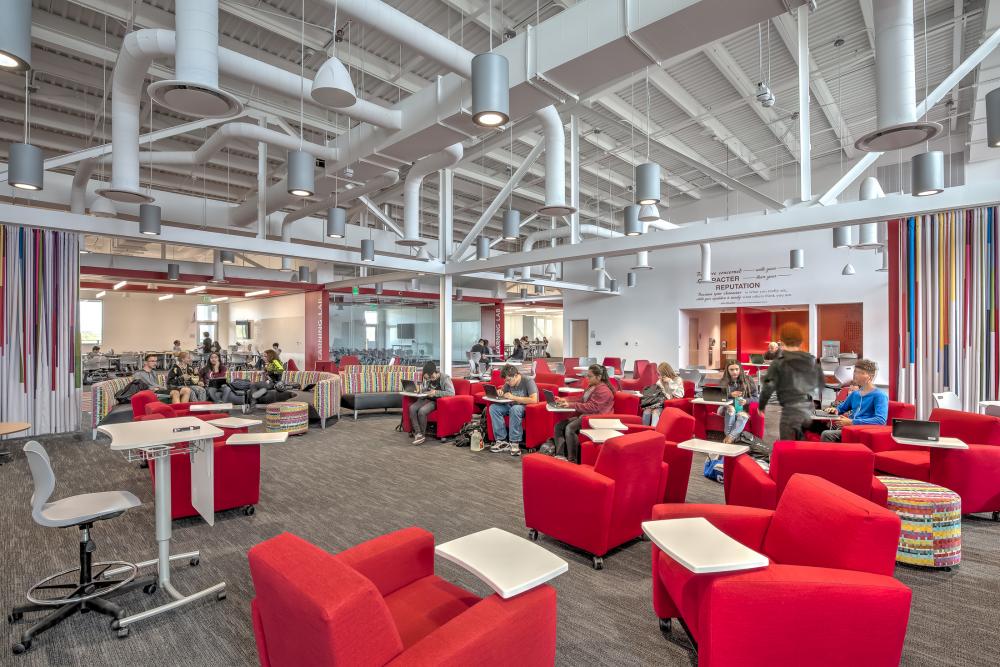 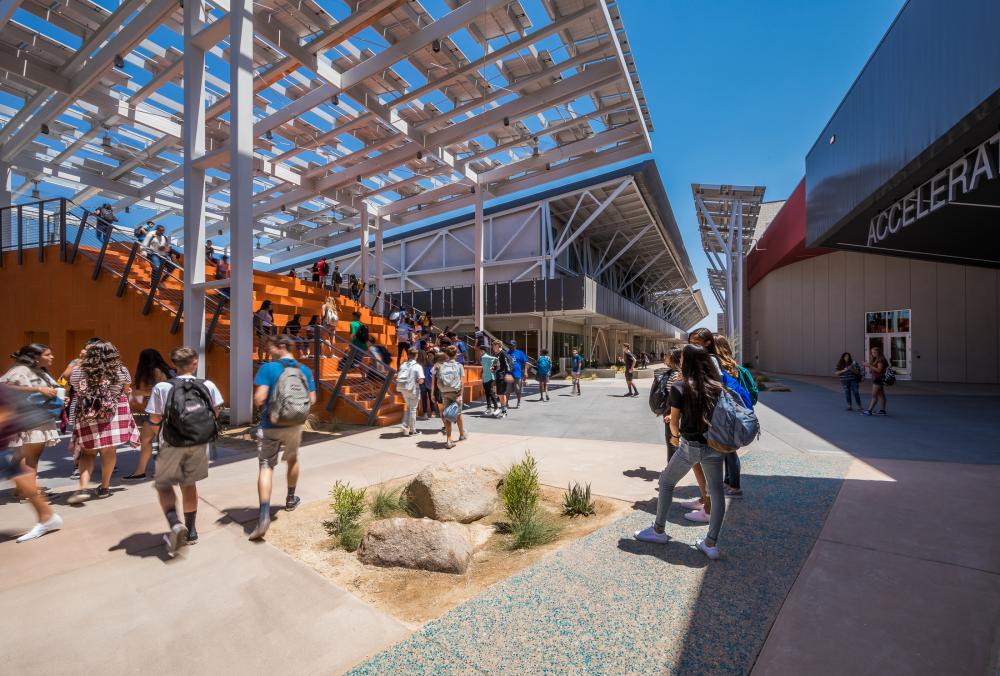 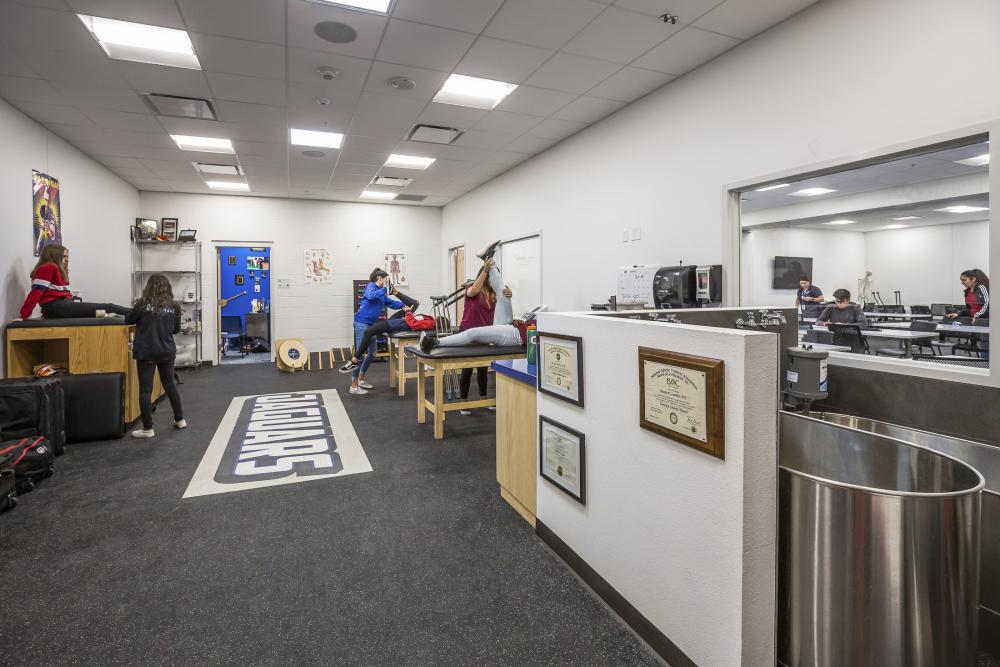 It was one thing to design, build, furnish, and landscape the school. It was another to turn over the keys to an innovative building to occupants who didn’t know how to use it. “If you install a new mechanical system, you’d train the maintenance staff on the system’s use,” says Kinney. “Why not apply that to the school itself? The staff knows how to teach, but you can’t shoehorn old teaching methods into this school and be effective.” Kinney leads a DLR Group team known as BOLD—Bridging Organization, Learning and Design—a kind of human owner’s manual, deployed to new schools to train the leadership on the ins and outs of the building’s many uses. At Canyon View, the BOLD group coached the educators on everything from scheduling classroom rotations and passing periods to operating the glass walls and suggestions for curtained spaces.

When the school opened in 2018, it only enrolled a freshman class, adding a grade level each subsequent year. Next May, the school will celebrate its first graduating class. How is the school working? Students are steeped in “the Jaguar way,” named for the school mascot, with an emphasis on respect and self-sufficiency. Following Principal Nowlin’s “no cells, no bells” vision—meaning classrooms are transparent, not prison-like, and there are no period bells—students are responsible to get to their next class sans Pavlovian ringing. They pick up trash, and they move furniture back where they found it. “This school makes you get out of your comfort zone,” says 17-year-old Ruben, a senior. “I have a lot of friend groups because of the changing environments. It gets me ready for the future.” Camila, 16, says “Everyone mingles here. The classes and the setting really get you ready for college.”

Teachers, too, are all in. “You either get it or you don’t,” remarks a biology teacher regarding the rotating classroom concept. “If you need to have your own room, you’re not going to like it here. But I found it liberating. It simplifies teaching for me. I don’t spend time worrying about putting up my bulletin board and hanging inspirational quotes that I don’t look at again until I take them down at the end of the year.”

Word of Canyon View’s design and structure has spread fast. Teams from other districts considering new schools come for tours, such as a recent visit by a Southern California school district. “We share our knowledge and our school,” says Principal Nowlin. “Our process has been successful. We have 140 kids on the wait list. People want in.”

Nora Burba Trulsson is an Arizona-based freelance writer specializing in architecture and design, as well as travel and lifestyle topics. Her work has appeared online and in publications such as Houzz, Phoenix Home & Garden, Sunset, Sources for Design, Arizona Highways, Arrive, Forbes Travel Guide, and California Homes.