Stephen Fox is an architectural historian and a Fellow of the Anchorage Foundation of Texas.

Chevron says it plans to demolish the three-story Shelor Motor Company Building at 1621 Milam Street and Pease Avenue. According to a spokesperson for Chevron, which has owned the property since 2013, the building does not fit the corporation’s needs for the site. Home to the Houston Press offices from 1998 to 2013, the Shelor Building is one of two remaining structures in the Milam Street auto row, which emerged in the second half of the 1920s as the corridor where Houston auto dealers constructed their newest, most modern car showrooms. If Chevron demolishes the building, Downtown will be left with yet another hole in its historic fabric.

The 41,000-square-foot building, of concrete frame construction, is surfaced with a mixed blend of brown tapestry brick accentuated with brick bonding patterns and limestone Jacobean ornament. Structural piers on the Milam and Pease street fronts frame wide openings originally outfitted with plate glass display windows on the ground floor, where the car showroom was located, and steel sash industrial windows on the upper floors. An innovation, according to an article published in the Houston Chronicle on January 8, 1928 to mark the building’s opening, was that the roof was to be used as a parking deck, accessible by an interior ramp serving all floors.

The rush to Milam Street began at the end of 1926 when the Meador Motor Company, Houston’s Packard dealer, announced it would build a showroom and garage at 1316 Milam and Clay, designed by architect Alfred C. Finn. Shelor was next, followed by the Brazos Valley Buick Co. (subsequently Earle North and then Al Parker) by Joseph Finger, Hargis Chevrolet by Hedrick & Gottlieb (1928), the flamboyant Art Déco A. C. Burton Motor Co. at 1414 Milam (1929) by Joseph Finger, and the sedate J. S. Tamborello Building (1930), still standing at 1901 Milam and St. Joseph and designed by the Russell Brown Company. These dealerships were an urban building type, two- and three-stories high, with sales floors at ground level, and engine and body maintenance-and-repair facilities on their upper floors. Although architectural themes varied, the concrete-framed buildings adhered to the Shelor Building’s format with vertical piers, infilled with glazing, subdividing the street fronts. The exteriors of these showroom buildings were straightforward but designed to frame new cars with scintillating architectural detail. 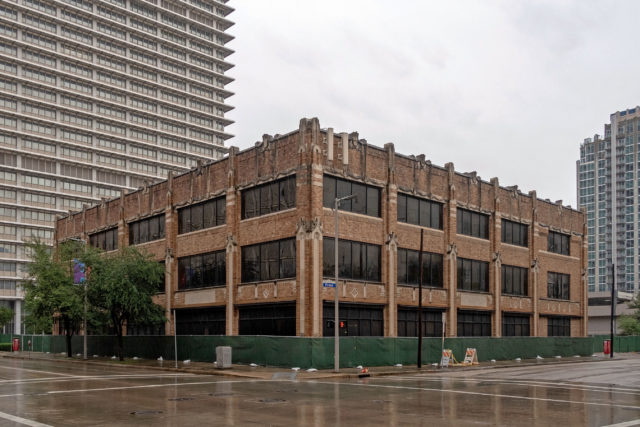 The Shelor Company sold Dodge Brothers cars and Graham Brothers trucks. J. W. Shelor claimed that he introduced Dodge vehicles to Texas in the course of a career that began in El Paso during the first decade of the twentieth century. Shelor subsequently moved to Dallas and then in 1921 to Houston when he purchased an existing Dodge dealership.

The Milam Street auto row (which spilled over onto adjacent Travis Street) mirrored similar corridors in other Texan cities that developed in the late 1920s, such as Broadway in San Antonio and W. 7th Street in Fort Worth. In the immediate postwar period, Houston car dealers began to “suburbanize,” erecting new dealerships in Midtown (where Central Houston Cadillac, amazingly, is still in business) before skipping west to Kirby Drive in the early 1950s. Yet some of the Milam Street showrooms were used as car dealerships as late as 1970. Frank Gillman Pontiac was the last car dealer to occupy the Shelor Building, remaining until 1967.

Why preserve the Shelor Building? Because demolishing it leaves another hole that Downtown Houston doesn’t need. The lively brick curtain walls, the limestone sculptural punctuation, and the building’s handsome proportions architecturally compensate for the dreary surfaces of adjoining parking garages. The Shelor Building complements the scale of the Tellepsen Family Downtown YMCA Building across Pease Avenue. It invites redevelopment that makes use of existing architectural resources rather than wastefully condemning them to the landfill. And it is a reminder that cars once contributed to the urbanization of American cities rather than reducing them to a bleak landscape of asphalt flatlands, what the Dutch architect Rem Koolhaas aptly calls “junkspace.”

OWNED: A Tale of Two Americas