How to Build Beautiful and Affordable Housing without Destroying Houston's History: A Review of +House by Cheryl Joseph

+House opens to the public for a special reception on Friday, August 17 from 4-7 pm at 6312 Conley Street. A related pop-up exhibition, "Six Projects on Accessory Dwelling," is on view at the Moody Center for the Arts from August 30 to September 1 including an open house at the +House on the afternoon of Sept. 1. This publication and the project profiled in this article are both based at Rice Architecture. Cheryl Joseph is an architectural designer at Titan Homes in Houston.

Densification, displacement, and gentrification are coming to a head in Houston as more people want to live close in. Houston’s primary approach to meet this demand for nearly two decades has been the construction of townhouses, guided by the 1999 revision of the City of Houston Municipal Code. The epicenter of this pattern of development is Freedman's Town, where nearly all the original housing, along with the African-American community, has been replaced. Now the same pattern is unfolding in Third Ward, East End, Near Northside, and Fifth Ward. The new construction is often far more expensive than what the existing community can afford while the scale and style of the townhouses tends to disrupt the character of historic neighborhoods. At the same time, communities want growth and the benefits of densification, such as new grocery stores and thriving schools.

Architecture faculty and students at Rice have been working to untie this knot through design. How can Houston neighborhoods get the benefits of densification in a way that is beautiful, affordable, and respectful of a neighborhood's history? (Hint: An innovative approach to bathrooms, kitchens, electrical, and air-conditioning is one key to bringing down costs to renovating existing structures or adding new ones.)

Under the leadership of Danny Marc Samuels and Nonya Grenader, Rice Building Workshop (RBW) has been working to synthesize solutions to affordability, densification, and reuse over the past 20 years. From an early stage, the organization worked with Project Row Houses in the Third Ward to make their domestic research hypotheses a tangible reality. The 2018 +House project serves as the intermediary chapter in the rebranding of Rice Building Workshop (RBW) as Rice Architecture Construct now under the joint leadership of Samuels and Andrew Colopy. +House, designed and executed by Rice University architecture students over the past four semesters for Agape Development in the Third Ward, is both a transition point and a culmination of their decades-long mission.

To truly understand the architectural approach taken for +House, one must first grasp Rice Building Workshop’s past in the Third Ward, a historic Houston neighborhood that has long been a bastion of African-American community and culture. The existing residential fabric built before World War II is both sturdy and vulnerable. While the houses were affordable, the electrical, plumbing, and air-conditioning (HVAC) systems were often outdated. Rice Building Workshop’s solution was to reinterpret the domestic core, realized through a series of iterations last manifested in the 2018 +House. Follow along for a quick overview of the experiments that have led to +House. 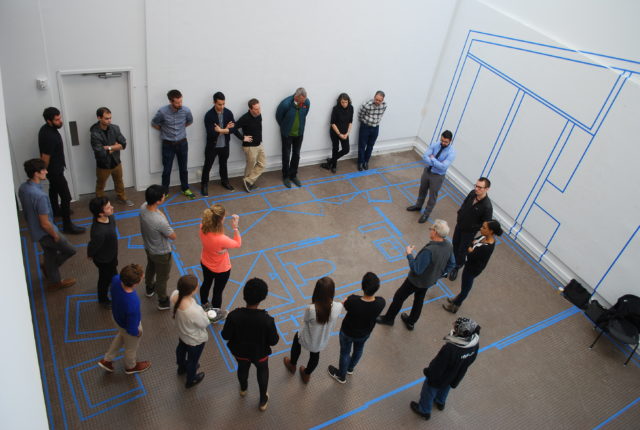 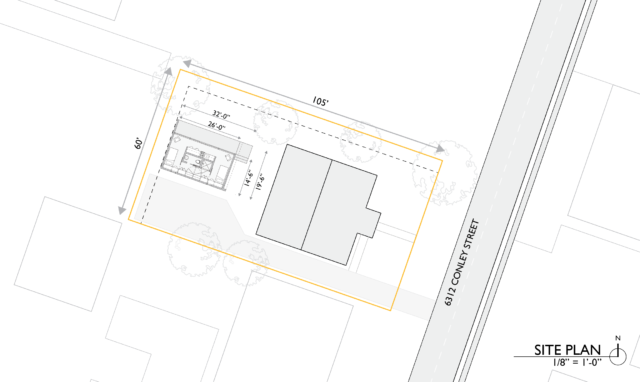 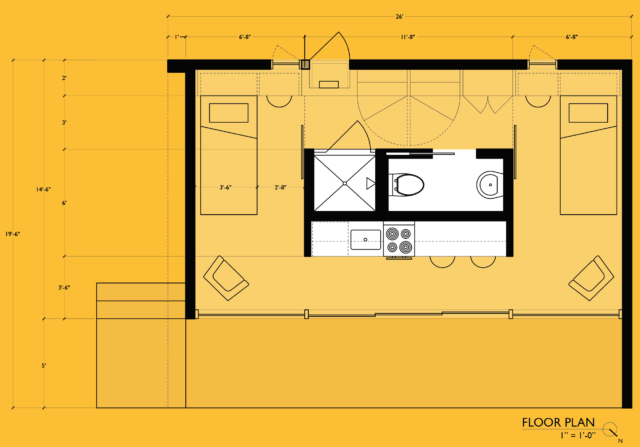 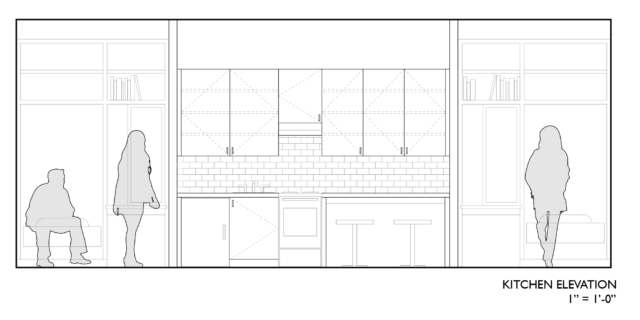 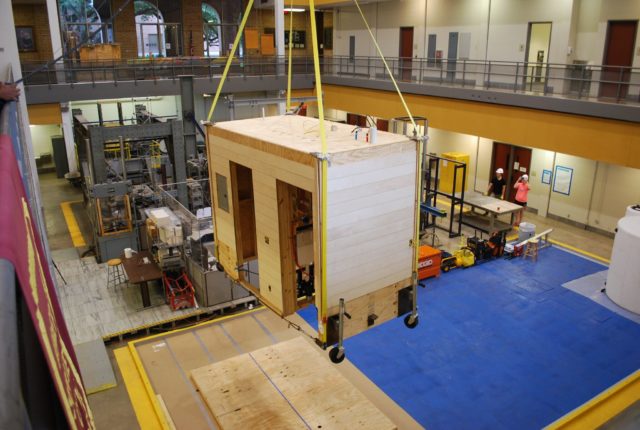 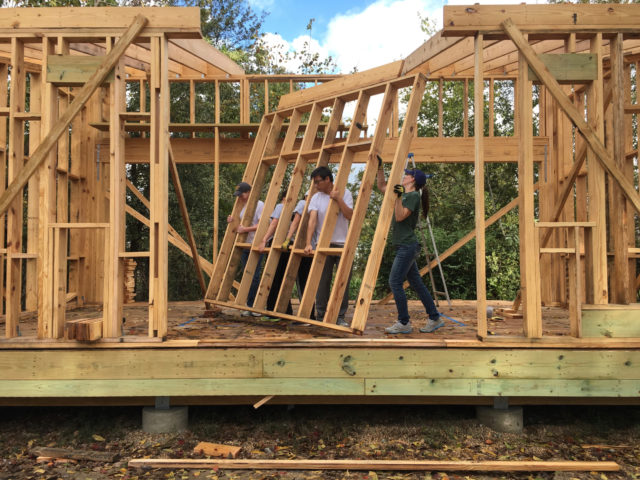 Extra-Small House (2003) was a modern interpretation of the vernacular shotgun house. Shotgun homes were narrow by nature, generally less than 15 feet in width, and ingenious in their simple design. With rooms unfolding onto one another in a linear fashion, prevailing breezes carried through an axis of open doors and through the house. Rice Building Workshop modernized the age-old design by injecting a domestic core that functioned as wall, furniture, and light. Housing the bathroom and kitchen, the “wet” core was faced with polycarbonate panels and strategically placed shelving.

The idea of core in ZeRow House (2009) multiplied by two: a wet core and a light core. The 8-foot-by-10-foot wet core further compacted the same functions as that of Extra-Small House - bathroom and kitchen were joined by HVAC, storage, and laundry. The wet core served the private half of the home, whereas the light core activated the public half. The light core was a literal extension of the outdoors into the indoors, drawing the porch within the home.

ModPod (2013) was the first instance of an inserted core, a retrofit. The 8-foot-6-inch-by-12-foot core, housing the same functionalities as RBW’s previous prototypes, was pre-fabricated off-site and then inserted into an existing, shotgun-style house at Project Row Houses off Holman Avenue. The structure was then waterproofed, and planned locations for MEP systems (mechanical, electrical, plumbing) were filled out on-site. This was the result of a realization that the area most needing of innovation was within the technical systems, rather than the structural and enclosure components. Through the insertion of the prefabricated core, the old residence was given a new life.

+House (2018) is the result of a collaboration between the newly branded Rice Architecture Construct and Agape Development, a community outreach group in Houston’s Third Ward. Agape needed a residence for their Gateway Residential Program, capable of housing two of their team members. The initiative assists at-risk youth, ages 18 to 25, in their transition to adulthood. The site came with limitations; an existing two-story residence housing 8 program participants took up the front portion of the site, meaning that the opportunity for new housing would be the construction of an Accessory Dwelling Unit (ADU) in the back.

An ADU is a secondary residence located on the same property as the main structure, and is either free-standing or connected to the main structure. Houston’s history with ADUs is rich and played a central role in the 1983 film adaptation of Larry McMurtry's Terms of Endearment. Often realized as garage apartments, Houston’s inventory of ADUs are primarily located in Southgate, Montrose, the Heights, and East End. The building type’s advantages are multifold, providing both additional rental income to the property’s homeowner and affordable, inner-city housing. The City of Houston guidelines determining ADUs are clear:

Construct and Agape’s building met all these requirements with its 360 square feet exceeding the minimum for two people. The sloped ceiling design raises the ceiling height from 9 feet to 12 feet interior and 14 feet exterior.

The ADU is twenty-six by fourteen feet, on a finished floor raised by structural piers to be three feet off the ground. The stepped entrance takes you to a five-foot-wide covered porch on the building’s north elevation. The porch meets the interior through a nearly 24-foot glass wall, activating the space within. In a small space, where every foot and inch matters, the spacious seven-foot-wide double doors open first to the kitchen.

The kitchen is housed within a programmatic core that, like the prototypic cores of Rice Building Workshop’s past, also houses the toilet, sink, shower, electric connects, and plumbing connects. The core also bisects the two separated bedroom spaces in plan, echoing the wet core/light core duality of the 2009 ZeRow House.

Storage location was built along the entirety of the building’s southwestern wall in the form of millwork cabinets and closets, reminiscent of the 2003 Extra-Small House. Within the bedroom spaces, the young adults are given a sense of privacy and ownership through quintessential, residential trimmings --- an individual window, a door, and a desk.

+House’s architectural programming and design has clear precedents in earlier works by Rice Building Workshop. The revolutionary nature of +House is the construction of the programmatic core, a prototype in its design and execution.

Most of the construction work was done by students enrolled in the elective sequence. The core was built off-site in Rice University’s engineering laboratory. Construction on-site at Conley Street contemporaneously progressed: plumbing ground utilities were guided on-site, structural piers were formed and then poured, the building frame took structure through decking first, and then walls and roof followed.

Following this, the core was then delivered via truck to the Conley Street site and inserted into the already raised and framed structure. Construction commenced; utilities were connected within the core to the ground hook-ups on-site: plumbing, electricity, then airconditioning.

Following that, construction followed that of a typical single-family residence. The residence was sealed via siding, windows, doors, and insulation. Work then focused on the interior, installing sheetrock, countertops, tile, fixtures, and appliances. Time savings to the overall construction process were considerable, thanks to the core’s construction being separate and off-site. Overall construction took about 70 days.

A beautiful and affordable future for Houston’s historic communities can take many forms. No doubt, apartments in duplexes, fourplexes, garden apartments, midrises, and highrises all have a place in the mix. For neighborhoods of mostly small-scale structures, +House offers a solution capable of breaking the paradigm of insensitive densification, having been designed as an accessory dwelling unit that is by nature ancillary to the preceding, historic structure. In a neighborhood like the Third Ward, which has grown increasingly sensitive to historic preservation and the need to combat its residents’ displacement, +House provides a means and a method to the paradigm shift. The off-site construction of the core has the potential to keep costs low and standards high.

If Rice Building Workshop’s two-decade-long residential core iteration was a response to pre-fabrication, then Rice Construct's ADUs add a focus on density. Both have big impact, both are a response to Houston's neighborhood and affordability requirements, both maintain continuity along with change. +House uses the precedent and knowledge developed by Rice Building Workshop, synthesized into a solution by Construct for Houston’s needs today.

+House opens to the public for a special reception on Friday, August 17 from 4-7 pm at 6312 Conley Street. 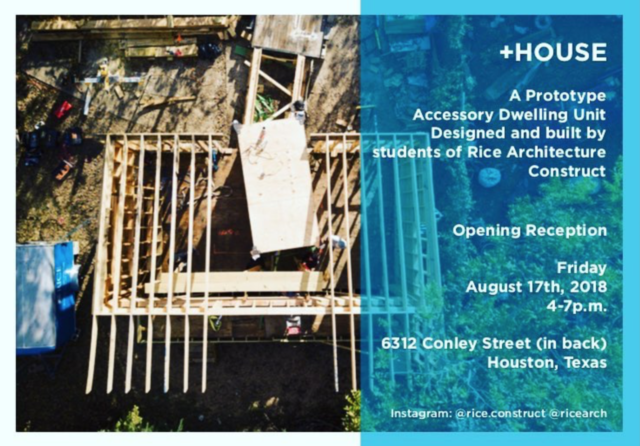