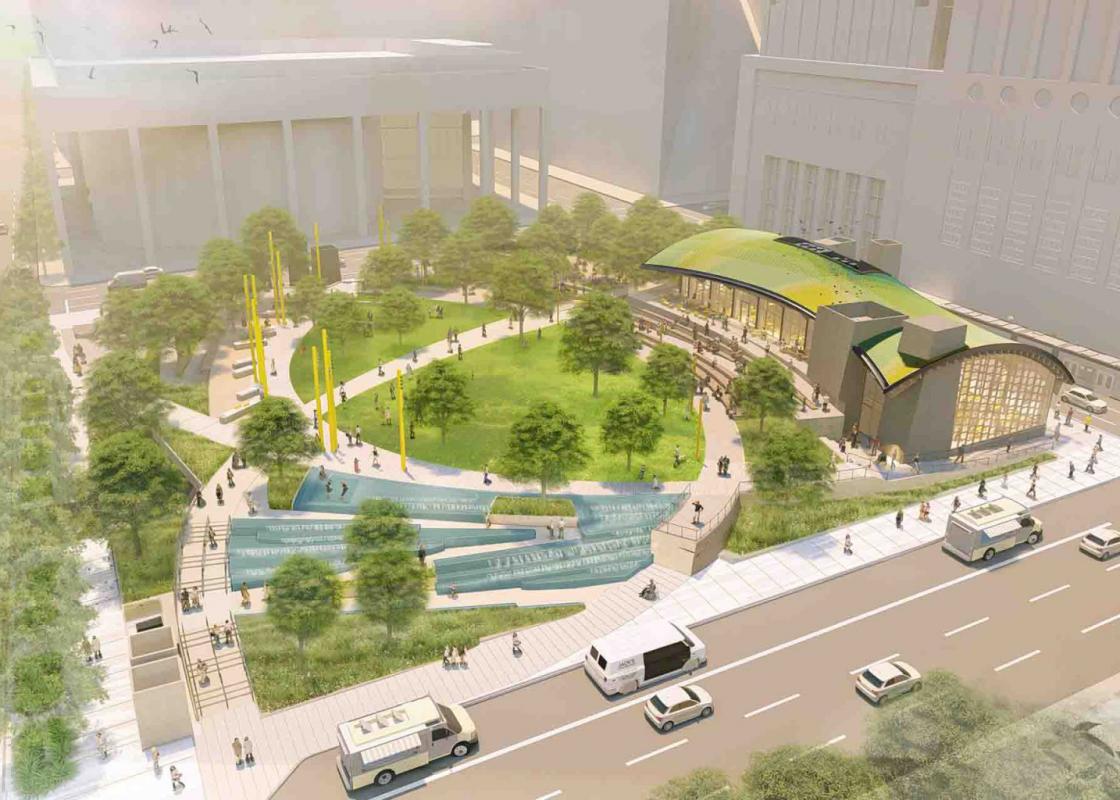 Lynn Wyatt Square for the Performing Arts. Via RIOS. 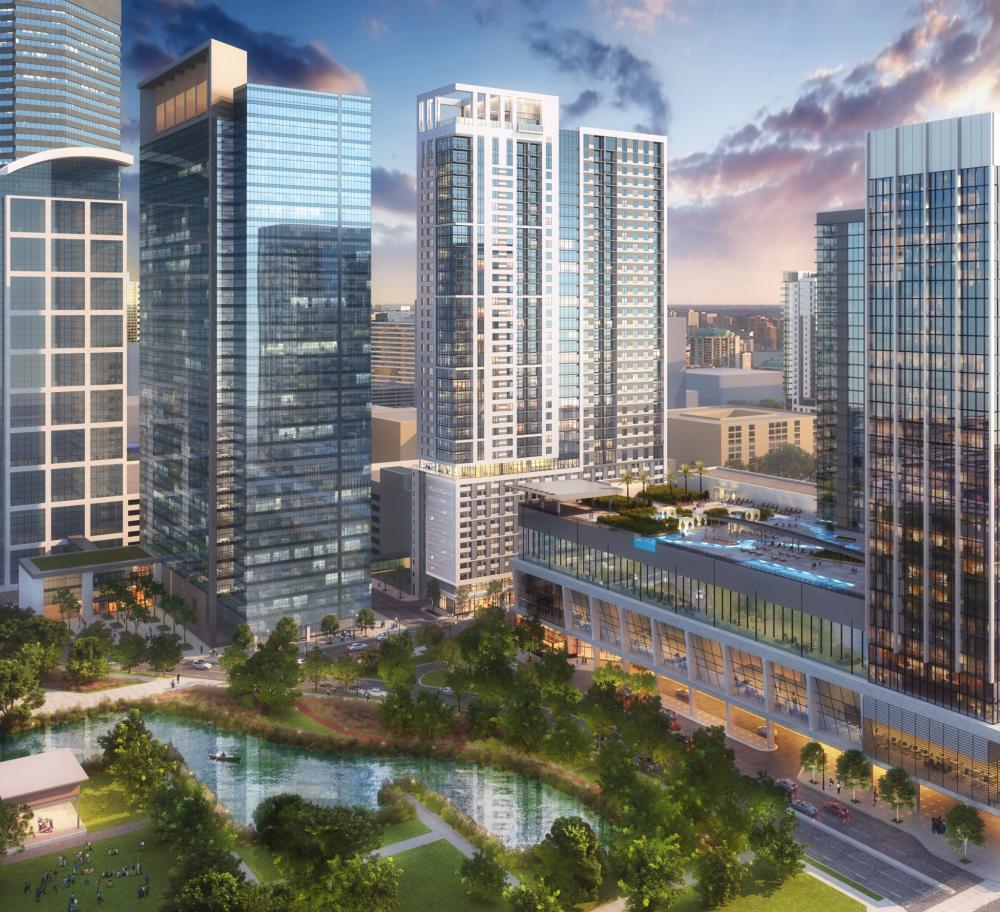 Today, the constant buzz of construction and renovation is the background hum for those who live and work in downtown Houston. After the pause of the pandemic, developments continue, though some factors like hotel occupancy or office vacancy haven’t yet returned to pre-pandemic levels, according to September 2021 numbers from Central Houston.

Still, earlier this year it was reported that more than $1.9 billion in new construction is in the works downtown. In many cases, these efforts seriously expand the public realm, as the incorporation of public-facing amenities into building lobbies or the strategic placement of green spaces encourages richer inhabitation by those who aren’t tenants or residents. This public activation is part of how downtown is being reimagined and improved.

From furthest out to already open, here's a quick breakdown of some of the spaces that are currently being delivered in downtown Houston. 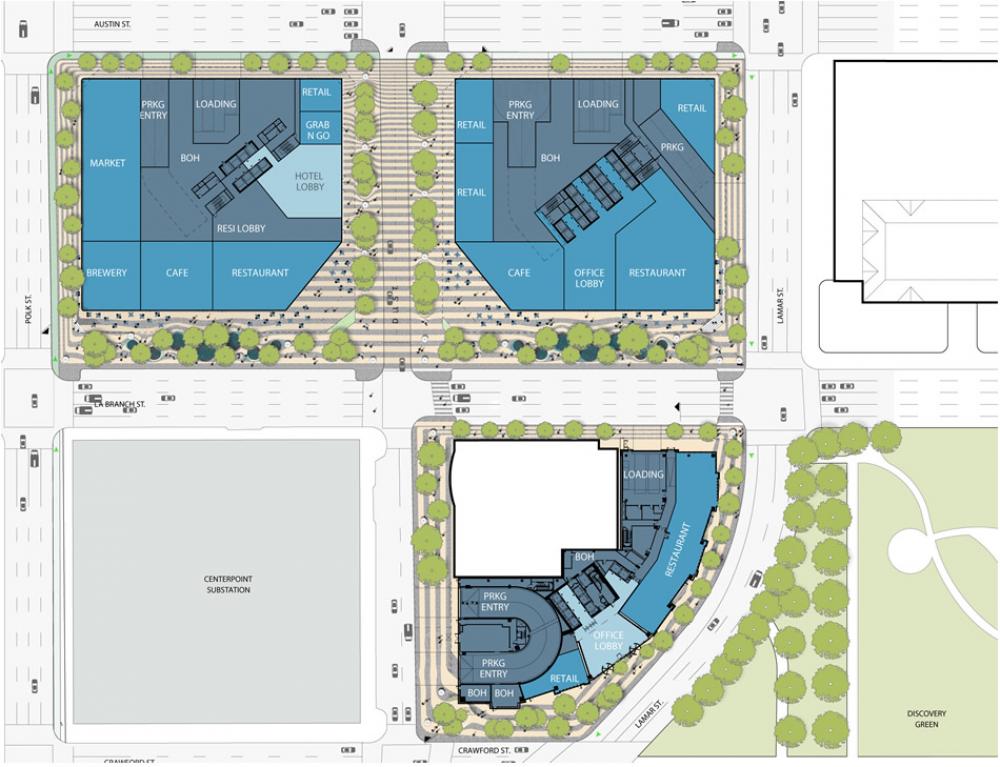 Site plan for Discovery West. Via 1550 on the Green.

As its name suggests, 1550 on the Green is an office building adjacent to Discovery Green. Designed by BIG with interior destinations by Michael Hsu Office of Architecture, the building will be composed of six towers of all different heights, which will be lifted to create a dynamic street space below. The site has a curving side adjacent to the park, so the six individual towers bend around that arc, leaving them slightly offset to each other, with a reveal between each tower. (Read Cite Editor Jack Murphy’s early take on the project here).

See new 360° renderings of the rooftop conference and event space and the ground-level retail on the project’s website. The project is marketed as “Houston’s home for forward-thinking business.” It’s also BIG’s first project in Houston. Construction is underway and expected to be completed by 2024.

A site plan by BIG for the larger Discovery West development suggests the next steps for the new district.

Block 98 is a new high-rise residential development designed by Ziegler Copper Architects. This 42-story building will be built on the lot northwest of the Marriott Marquis near Discovery Green. Block 98 will contain 309 apartments in a mix of one-, two- and three-bedroom floorplans, including sixteen two-story townhome-style units on the 15th through 34th floors and four two-story penthouses on the 41st floor. Its location combined with its height means south-facing apartments will overlook Discovery Green. Ziegler Cooper Architects has made its name through the development of 35 million square feet of urban residential living. These efforts embrace density, which in turn helps combat suburban sprawl. Block 98 should be complete by mid-late 2022. 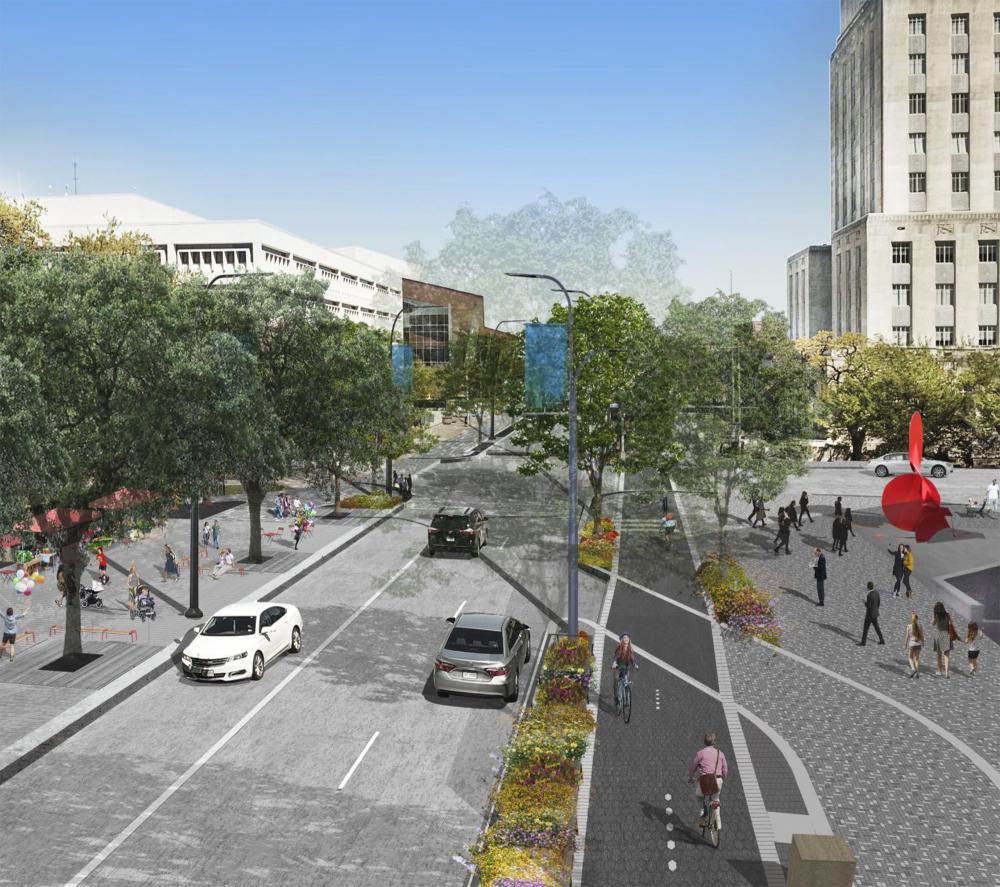 Proposed view at the library, looking east. Via the Bagby Street Improvement Project presentation to the City of Houston TTI Committee in 2018.

“Bagby is a street of parks,” declares the April 2018 final report of the Baby Street Improvement Plan. The street connects POST Houston to Bayou Place, City Hall, and the Houston Public Library, making it an important thread through downtown. This effort will renovate a ten-block span of Bagby Street to create a more walkable streetscape. The project team includes Jones|Carter, SWA Group, G2LD Lighting Design, CSF Structural, Nelson Nygard, among others. The new streetscape will include smaller vehicular lanes, larger pedestrian walkways, and a bike lane. As the street remains active into the night thanks to the Theatre District, the project will be a major improvement to the streetscape and nighttime walking. At a cost of $29 million, it’s one of the larger initiatives that will reshape public space downtown. Work began in 2020 and is set to take two years of construction.

The Lynn Wyatt Square for the Performing Arts, a full-block urban renovation project to replace Jones Plaza, broke ground this summer. Previously, the square hosted an array of pavilions by Willis, Bricker & Cannady. With a new design by RIOS, the goal of the park is to create an urban hub on the west side of downtown in the Theatre District. Breaking from its rectangular block shape, the park uses three large curvilinear circulation paths to deal with grade changes. The square will include a cascading water feature designed by Fluidity Design Consultants, gardens, a large central green space, public outdoor theaters, and a restaurant. This project is currently under construction and is set to be finished by summer 2022. 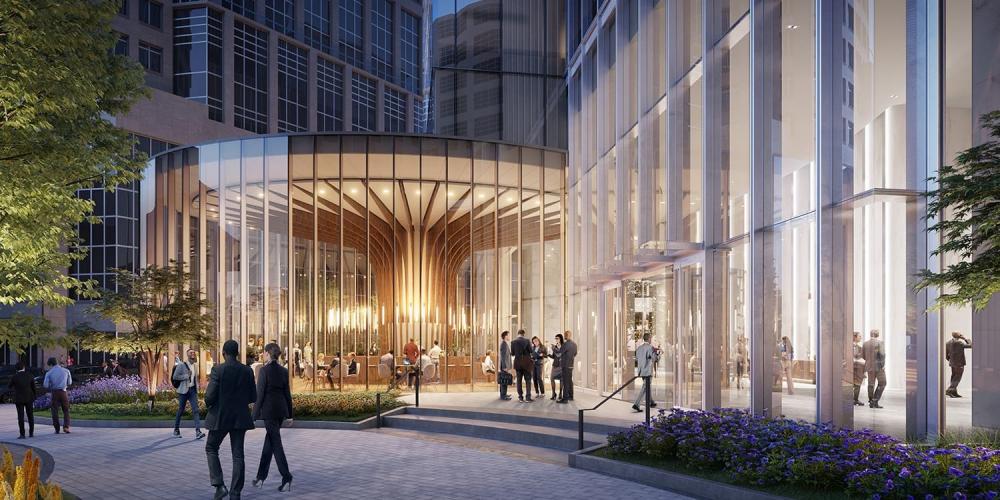 Texas Tower
Once completed, the Texas Tower will be Houston’s eleventh tallest building. The 47-story tall skyscraper rises on the site of the former Houston Chronicle headquarters and is being developed by Hines and Ivanhoé Cambridge, with design efforts headed by Pelli Clarke Pelli Architects. (Clark Condon is providing the landscape design.) The building’s entrance lobby, as seen in some of the renderings, takes cues from the hospitality sector, as it will include multiple culinary offerings; abundant spaces for networking; a conference facility; public gardens on the 12th floor; and a fitness center. The tower is placed diagonally on the site, which results in in unique views from the building as well as cementing its presence next to its neighboring skyscrapers, including Brava, designed by Munoz + Albin, also for Hines. Pelli Clarke Pelli Architects has designed towers around the world, including Taikang Tower in Beijing, Salesforce Tower in San Francisco, and Torre Banco Marco in Bueno Aires. Completion is expected in late 2021. 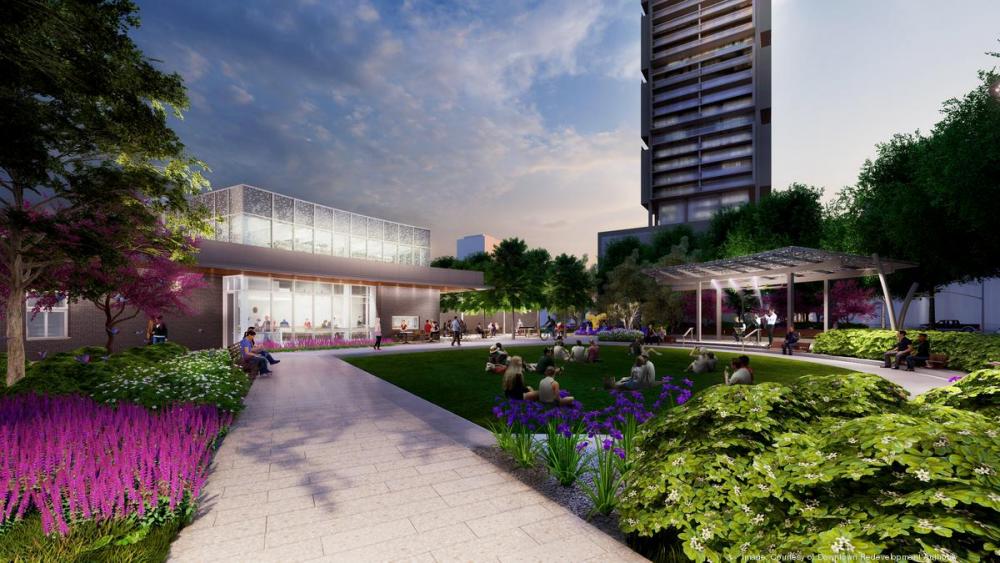 Designed by Lauren Griffith Associates with Gensler and built by Structura Inc., Trebly Park occupies an L-shaped parcel between Fannin and San Jacinto in the block between Bell and Leeland in the southern part of downtown. This area is starting to see more and more residents move into the area, and a high-quality green space is long overdue for the current and future residents. The park will not only provide an amenity for nearby residents but will also serve as an oasis for outside visitors, as the area lacks green spaces. (The lot was previously surface parking.) The L-shaped park will include a new location of the EaDo staple Tout Suite, dog park, playscape, and an outdoor performance space, as well as an art installation by the German artists Thomas Granseuer and Tomislav Topic of Quintessenz.

The name trebly originates from both the fact that the park itself will have three corners, as well as the idea of this space becoming a third home of the nearby residents. Construction began in March 2021 and is expected to complete in March 2022. 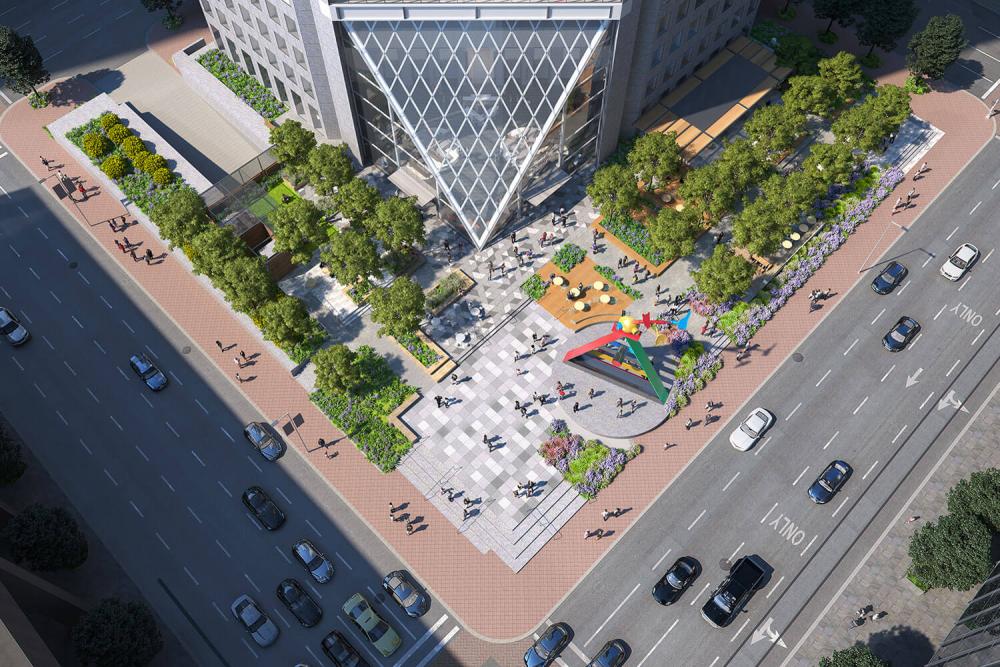 Nearby, 600 Travis Street is receiving some notable changes. To start, the seventy-five-story tall building will be once again called the JPMorgan Chase Tower, as Chase will once again become its lease owner. This new name will be accompanied by a new look. In a likely nod to I.M. Pei, the building’s original architect, the lobby will now feature a pyramidal glass entry. (Pei also designed the iconic entrance to the Louvre in Paris.) The shift from the existing curtain wall façade to the new pyramidal lobby will add around 3,000 square feet of retail space to the entrance. This, as well as the addition of landscape, establishes a more ceremonial arrival from the exterior to the interior of the building. (The iconic Joan Miró statue outside will remain in place.) These improvements are led by HOK. A January 2021 press release estimated completion in September 2021, but work is still ongoing.

Now open, POST Houston is one of the city's most anticipated projects. The building, once Houston’s main post office, has been repurposed to now be a cultural campus, home to a number of destinations, including a food hall, a rooftop farm, and 713 Music Hall, a 5,000-seat venue from Live Nation. Designed by OMA New York for Lovett Commercial, the project team also includes Powers Brown, and Harvey Builders. Hoerr Schaudt led the design of the 5.5 acres of rooftop green space. The existing framework of the building has been left intact and serves as a shell for the new renovations.

To learn more about the project, watch OMA New York Partner Jason Long’s Spring 2021 Rice Design Alliance lecture about the project or see Paul Hester’s photographs just before the start of construction on Cite Digital. The venue is also the location for The Resilient City, RDA’s gala in January 2022. 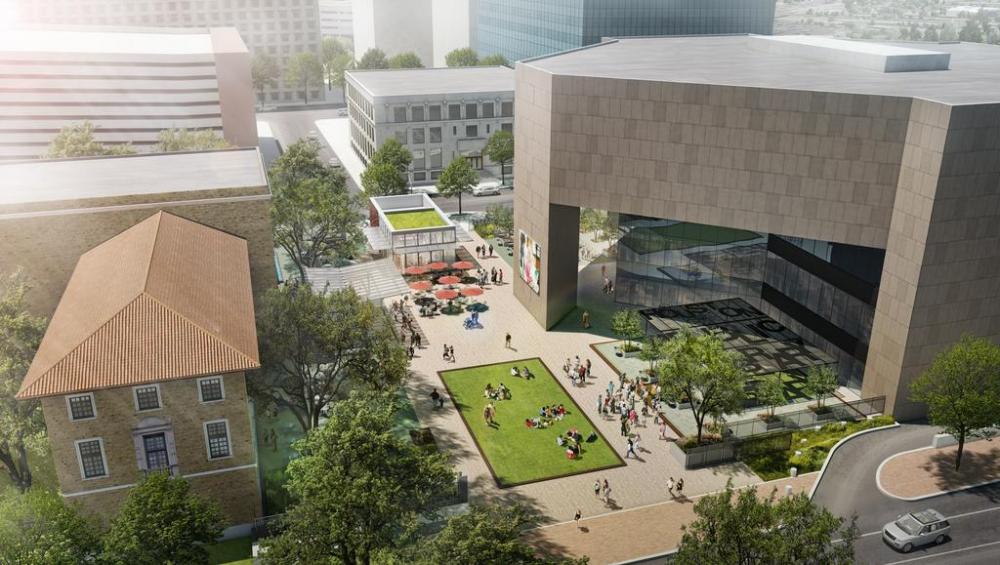 Given that the Houston Public Library was forced to adapt during the pandemic to continue to serve patrons, the reduced use of the space has given the library time to renovate its outdoor spaces. The HPL reopened its central location on September 8, 2021, which also marked the improvement of Barbara Bush Literacy Plaza.

The outdoor plaza was first opened back in 2016, but recently this public space was enhanced through a design by Lauren Griffith Associates. The plaza now sports new paving, an artificial lawn, planters with trees, a water wall, new furnishings, an adult reading area, a children’s reading room with shade structure and fans, a performance stage, and a video display screen for engaging programming and events. These new amenities create a more usable outdoor space for both visitors from all over Houston and downtown residents. 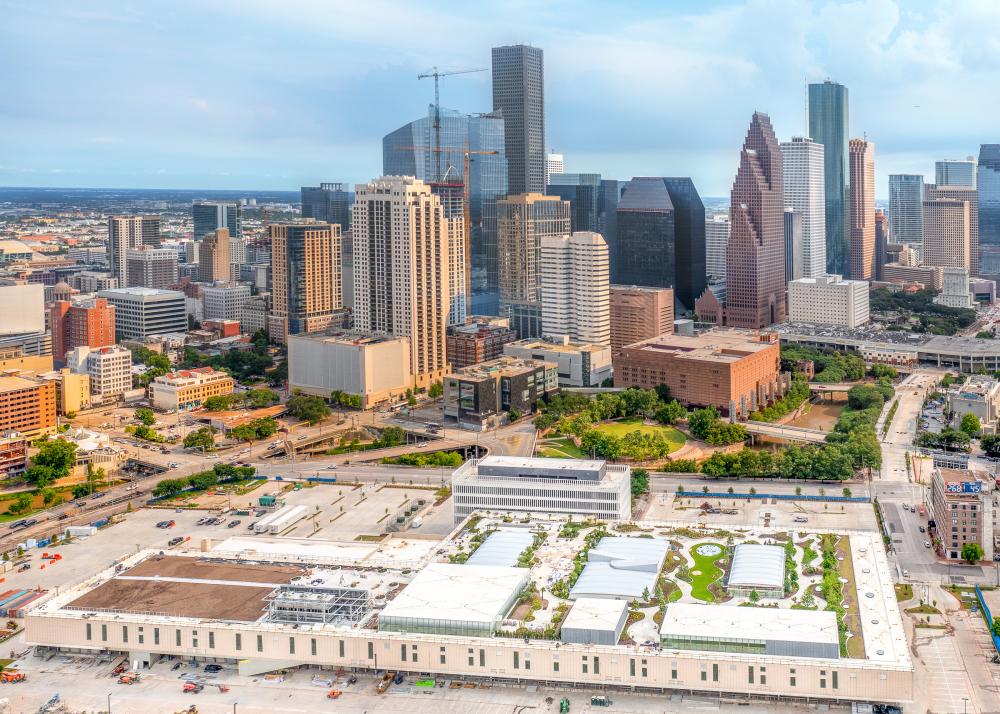 Downtown Houston is lively. It’s also in the process of becoming more residential; nearly 10,000 residents live here. This change can be seen in the creation of more public spaces and destinations that are accessible beyond business hours. There are many ongoing projects downtown, and the list will continue to grow. Final decisions about the NHHIP will also stand to have a major impact on downtown for decades to come, as will major efforts east of downtown, such as East River and the improvements of the Buffalo Bayou Partnership.

If these and other designs are welcoming enough—and they’re reliably connected by sidewalks, bike paths, and transit routes—there’s a real chance that downtown Houston will continue to improve its network of destinations, which in turn forms the basis for healthy city life.

Rodrigo Gallardo is an undergraduate student at the University of Houston Gerald D. Hines College of Architecture and Design. He is interested in architecture history, theory, and criticism, as well as the confluence of art, architecture, and film.