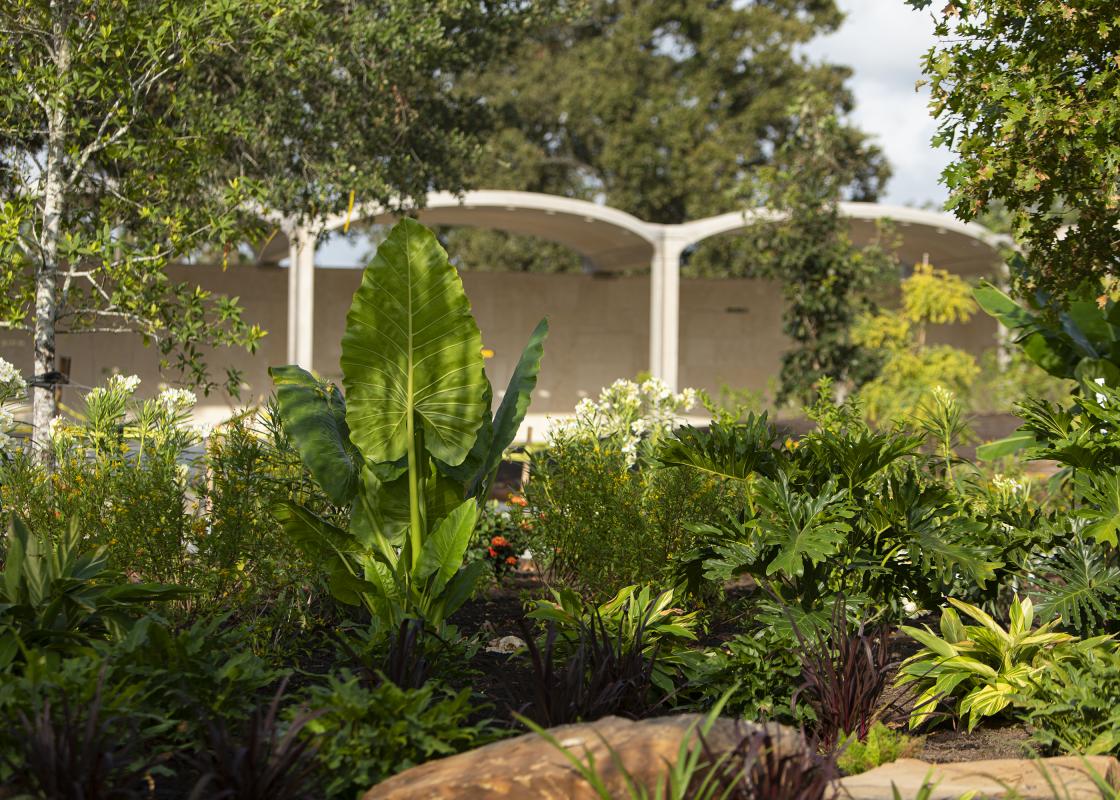 Looking through the Global Collection Garden to The Alcoves beyond. Photo by Michael Tims courtesy Houston Botanic Garden. 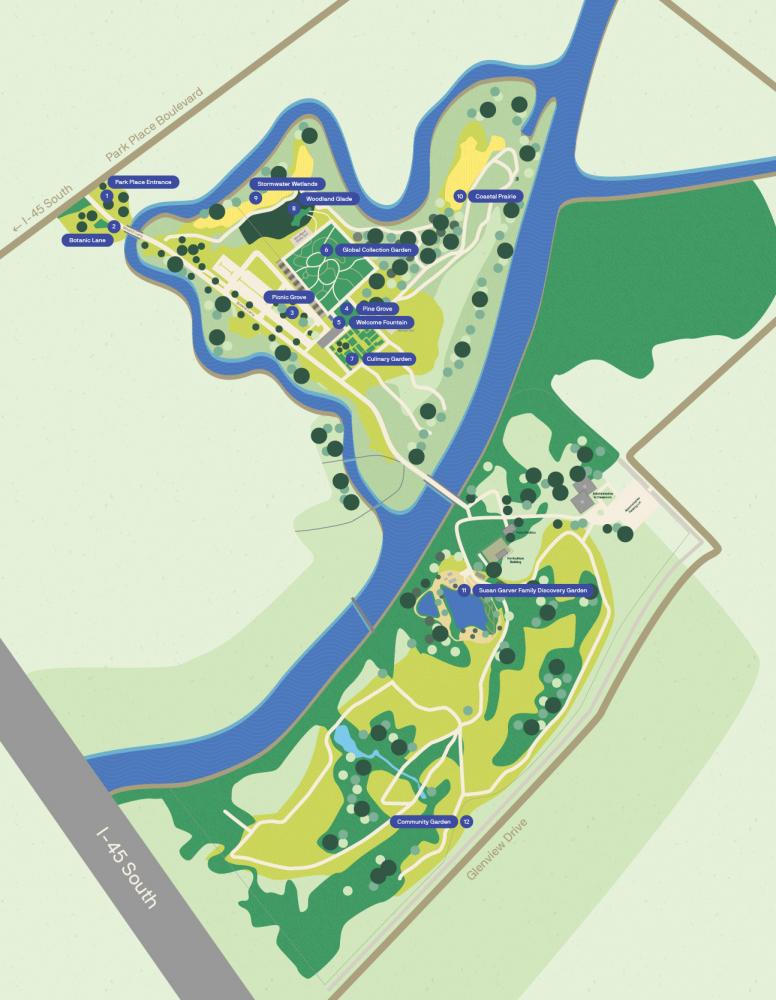 As of today, Houston Botanic Garden (HBG) is now open to the public. Though the pandemic remains a serious concern, the garden will host four weekends of activities this fall, each focused on the flora of a different continent. The garden promises to be a unique botanic experience, unlike that of any other green space in Houston.

HBG spans Sims Bayou in Southeast Houston, just east of Interstate 45 and outside the Interstate 610 beltway. It repurposes a City of Houston golf course—a move with a contentious backstory—and, across the water, transforms an island of high ground created when the natural course of the bayou was altered for flood control. The surrounding low, meandering stormwater wetlands have a threefold purpose: The palette of coastal prairie and wetland native plants not only exceeds the City of Houston's stormwater detention requirement by 1,000 cubic yards but is also a beautiful specimen of a thriving Houston ecosystem and provides a physical threshold on all sides of the main garden site that signifies a dreamy departure from the regularity of Houston’s streetscape.

Arriving to the garden is a notable procession. Once through the entrance gate off Park Place Boulevard, over the vehicular bridge, beyond a series of giant moss-draped live oaks, and past the parking lot, you are greeted by a first glimpse of what is to come. The colored CMU wall, which houses specimen cacti and is capped by mysterious precast concrete roof, directs you to the entrance. The welcome pavilion, designed by Overland Partners, is low and understated, as if it was part of the protecting wall of the garden. The building is clearly not the intended attraction, but this doesn’t diminish the appeal of its long horizontal lines and soft limestone facade. An ornamental celebration of botanical forms wrought in curled metal sheet forms the gate that swivels open to lead you into the garden proper; it is a preview of the rich sensorial experience that awaits.

There are three focal points within HBG’s 132 acres: The main Global Collection Garden, its accompanying shade structure, the Susan Garver Family Discovery Garden, and the Culinary Garden, which was still under construction during my visit but has an intriguing concrete structure with the suggestion of a water wall and a monumental table. 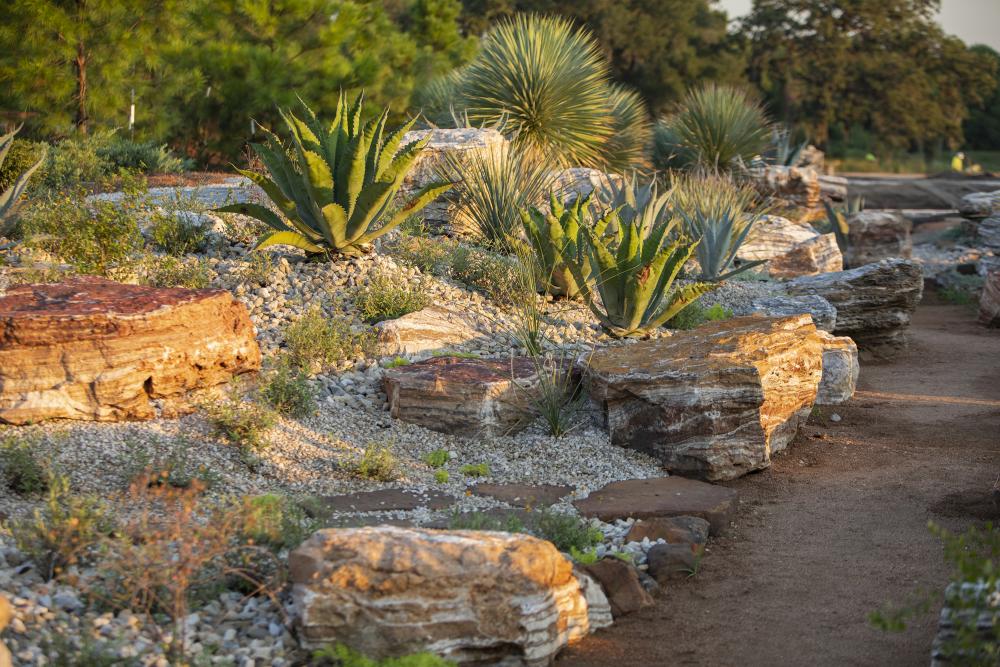 The heart of the HBG is its three-acre Global Collection Garden. Its program is much like that of any other botanical garden: Specimens of plants from around the world are showcased in a loose semblance of their natural environments. But what is incredible about this garden—and well worth the drive and price of admission—is the artful way each section or "petal" of the garden is comprised of colors and textures that are completely different from the others. There is a moonscape with colored rocks and strange succulents, an African Savannah, a spread of cacti, and a "room” made by bamboo, among other zones. Hidden within these environments are even more surprises and nooks to explore, as each section has secondary footpaths and trails, creating a truly immersive experience.

Along the west edge of the garden is The Alcoves, a linear shade structure built with precast concrete vaults with circular punctures. It is a generous colonnade that doesn't skimp on square footage. I can already imagine parents congregating here while their children play in the garden or attend a demonstration at one of the two outdoor classrooms.

A bridge over Sims Bayou provides walkable access to the Family Discovery Garden. HBG is a visual spectacle, but this area delivers exciting hand-on experience. The play equipment is not a standard set of slides, swings, or jungle gyms, but instead a collection of interactive waterscapes that drain to a pond bursting with local and exotic wetland plant species. This is a playground where adults might compete with children for the joy of pushing buttons, maneuvering water slides, and spawning hidden streams, sprinklers, and pools. Beyond lies the rewilded golf course. A second phase of the project aims to establish a community garden, and the organization is interested in building an events pavilion and conservatory. 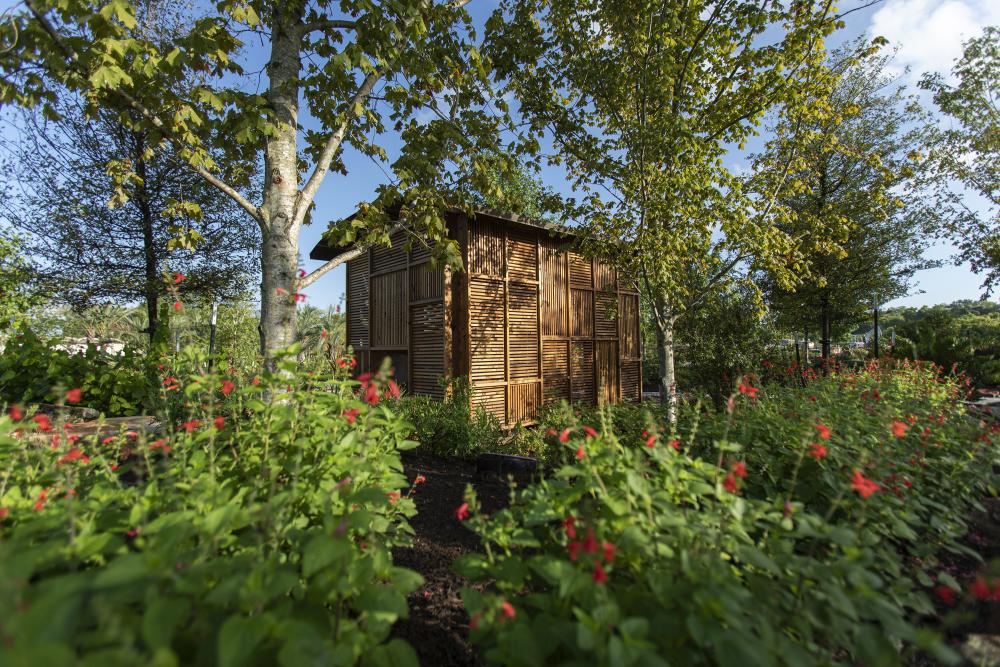 HBG’s mix of thoughtfulness and ambition is the result of its design by West8 (Clark Condon Associates Inc. provided local landscape architecture services). The well-known company was founded by Adriaan Geuze in 1987 and now operates from offices in Rotterdam, New York City, and Belgium. In North America, they have completed landscapes such as Governor's Island in New York City and the Four Wave Decks on the Toronto waterfront. The company has a reputation for unconventional, grand design gestures that result in unique projects. The response to West8's early proposals often sounds like: "What? They're proposing what? They can't do that!"  Early proposals for the project included renderings of a bridge over Sims Bayou that supported planters holding native tree species; this element hasn’t been realized, yet.

That the garden exists at all is notable given the long history leading to its construction in this location in Houston. The idea for HBG began almost thirty-five years ago when, inspired by landscape architect Keiji Asakura, Houstonians Kay Crooker, Anita Stude, and Nancy Thomas (a former president of the much-lauded Garden Club of America), envisioned a world-class botanical garden for the city of Houston that could rival those of St. Louis and New York, a cause both admirable and philanthropic. The full timeline of this process can be read in Sheryl Tucker de Vazquez’s 2016 article for Cite Digital (previously Offcite) about HBG. 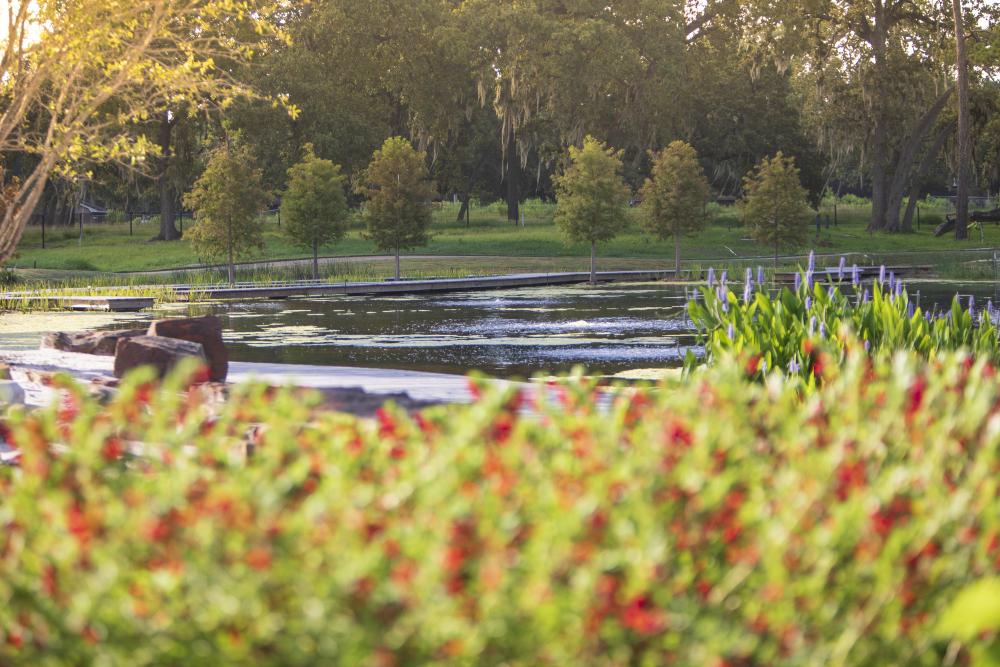 After establishing their non-profit corporation in 2002, the group then sought a site. Studies for locating the garden within existing parks didn’t work out, so the Gus Wortham Golf Course in the East End neighborhood close to downtown was offered up. HBG courted East End stakeholders for months before the deal was rejected. Then, unbeknownst to residents in the nearby Park Place and Meadowbrook neighborhoods, the Glennbrook Gold Course was provided as a second choice. Less than four months later, the city council voted unanimously to grant a thirty-year lease to HBG for $100, with the option to renew twice for a total of ninety years. To sweeten the deal, the city agreed to cover the water bill.

Residents in Park Place and Meadowbrook, a predominantly Latino working-class community, were rightfully indignant. Citizens argued that the golf course was a historical connection between the two neighborhoods, property taxes would increase, and gentrification would be accelerated, eventually displacing residents. For locals, the open space had become more like a park than a golf course and, as reported by Tucker de Vazquez, they worried about access to the bayou and the green space. Neglect, it seemed, yielded unexpected fruit: As the golf course became less popular and usage fees dropped, maintenance by Parks and Recreation Department fell away. This gradual abandonment allowed the expanse to become a lush pocket of Houston biodiversity with a rare amenity: topography, the result of the contoured golf course. Standing in the evening light and looking across the terrain, it's easy to forget you are close to the geographical center of the ninth-largest metropolitan area in the world. 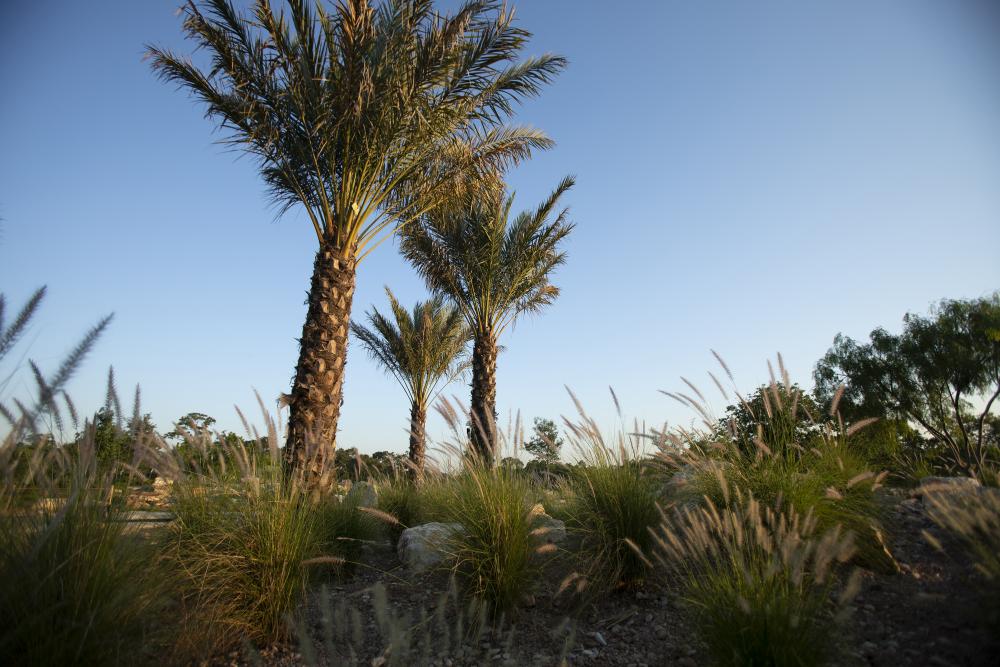 Although the tone-deaf transaction that brought the garden to this community was unfortunate, hopefully the project will overcome its rough beginnings. It seems to be on the right track. The staff leading the project are a big win: The team is dedicated to serving Houston as a whole, but especially HBG’s local community. Eleven acres of non-ticketed space have been set aside as picnic groves and park land, and there will be volunteer opportunities for those who live nearby. HBG has plans to keep the southern edge of Sims Bayou open as part of the Bayou Greenways program. A community garden, free for residents, is currently planned. Ahead of HBG’s opening events, I spoke with Ayanna Jolivet McCloud, Director of Education and Public Programs, who recognizes that now is the time for HBG and its neighbors to build trust. She said, "It's about intentional outreach to the community and identifying what the people around us need. It's a partnership."

Rachel Wilkins is a designer at SWA. She began her design career as PreMed major at Loyola University, where she was far more entranced with the beauty of unicellular organisms under a microscope than her course material. As a designer she is object-specific and takes great pleasure in working geometry and materiality of spaces to best produce a desired experience. She graduated from the University of Houston with a Master of Architecture in 2012 and joined SWA at the beginning of 2020 after a seven-year tenure at OJB. Her past project experiences include public parks, high end retail and mixed use, corporate campuses, and office towers.

Do Nothing Without Intention 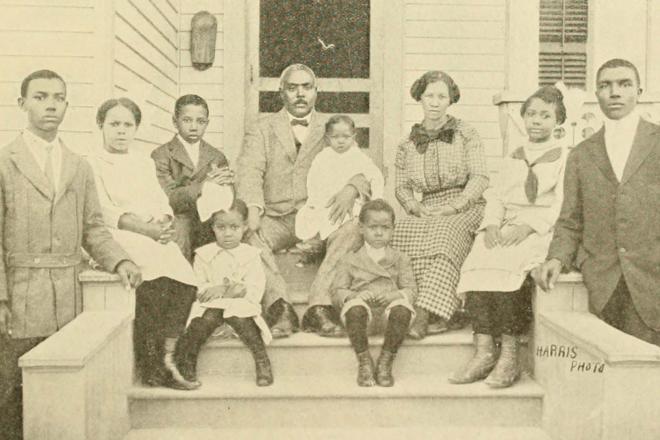