A Review of New Hope Housing Harrisburg by Marie Rodriguez

Marie Rodriguez is an associate at Morningside Architects. She holds an M.Arch from Rice University and an MS from McGill University with a specialization in domestic environments.

You are driving to work, running a little late, when the traffic light turns red. You are jolted to awareness by how only your windowpane separates you from dozens of people living beneath the highway underpass. You ask yourself, how is it that a city as wealthy as Houston could not do more?

In an attempt to answer that question, I spoke with friends and colleagues who directed me to a place not far from my own house and the underpass I see on the way to my work.

At New Hope Housing Harrisburg, a framed letter from resident Stephanie Dicesare hangs in the ground floor common room. “A piece of heaven on Earth” reads the description to a drawing of the very same building where it hangs. A rainbow arcs above the artist’s new home. This phrase encapsulates the promise of a restored life at the single room occupancy (SRO) residence, located at 3315 Harrisburg Boulevard, in the Second Ward. The thank-you note reflects the success that New Hope Housing has had with their exemplary affordable housing program in Houston. 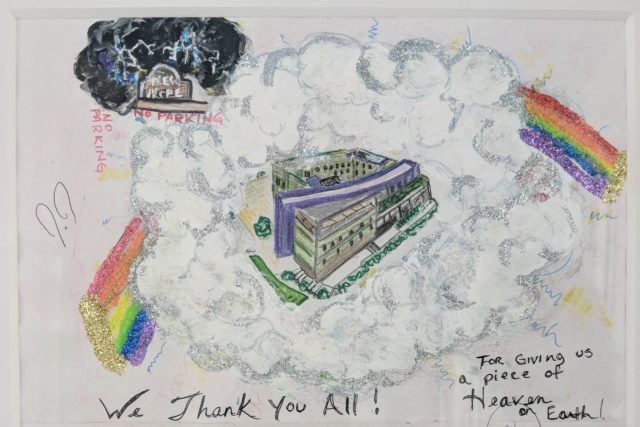 Designed by GSMArchitects, the Harrisburg building opened this year near the Coffee Plant / Second Ward stop on the METROrail Green Line. It features a courtyard, library, and computer lab that create a cohesive living environment. Near the main entrance, an open office setting with private rooms to the side provides space for staff to meet with groups such as SEARCH Homeless Services that connect residents to various social services offered within the Harrisburg building walls and out in the community. Through this coordinated effort with a variety of non-profit and government services, New Hope Housing fosters a comprehensive support system for people who are at risk of homelessness.

The units themselves are like furnished dorm rooms with a single bed, closet, desk, sink, fridge, dedicated climate control, and bathroom. The finishes of the building are dignified in their sturdy simplicity. The hallways have polished concrete floors, Hardiplank-type siding, and views into the courtyard. This design approach developed over more than a decade. 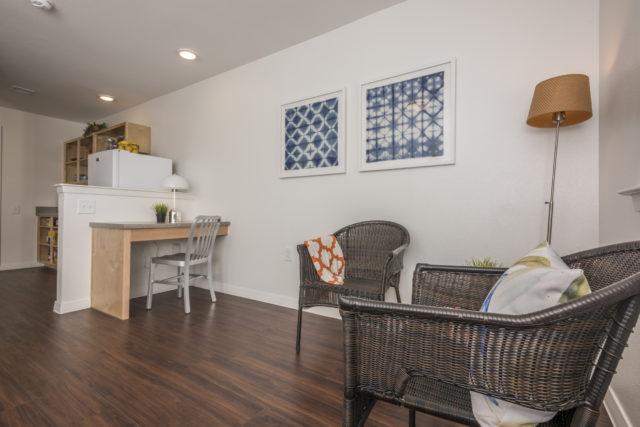 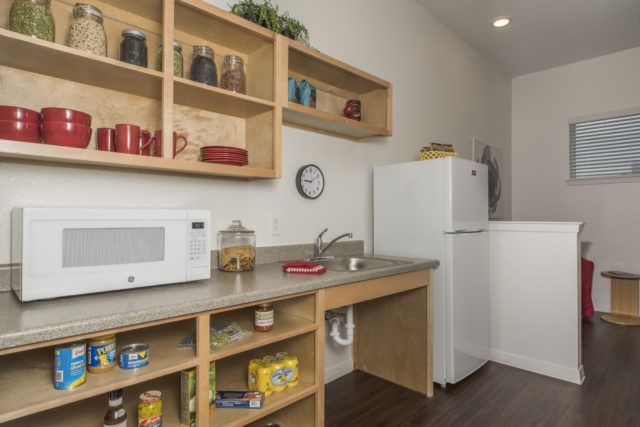 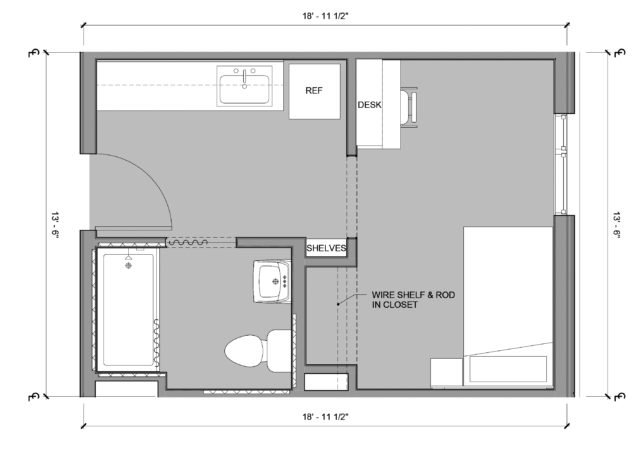 Begun by Christ Church Cathedral-Episcopal in 1993, New Hope Housing opened its first property Downtown on Hamilton Street in 1995, which has since closed and its residents moved to Harrisburg. New Hope Housing completed its first residential building to be situated in a residential neighborhood in 2005 on Canal Street. Designed by Val Glitsch, this project set an excellent precedent for future ones. Attention to the siting, materials, and color help break down the building’s scale. The units and common areas are organized around a small courtyard. Subsequent housing projects took this approach and optimized outdoor common areas, resilient building materials and finishes, and efficient access systems. The safety of entry and exiting at each housing location improved as the residents and administration further examined their lessons learned: what worked versus what could be improved.

At the Brays Crossing development, the design made use of playful colors and cultural forms through a collaboration between its architect, also GSMA (formerly Glassman Shoemake Maldonado Architects), and the artist team, Carmen Lomas Garza and Kim Clark Renteria. This project further underscored for New Hope Housing the powerful, positive impact that materials, colors, and placement can have on an environment by enhancing, protecting, and celebrating its residential community. Whenever possible, an outdoor landscape is incorporated into every New Hope Housing project as a unifying element that can restore and rebuild stable residential life. (Disclosure: I worked briefly for Glassman Shoemake Maldonado Architects before their work with New Hope Housing.)

The Sakowitz location slips strips of greenscape amenities that encourage outdoor gatherings, which in turn, foster a sense of community. Supportive services are integral to each project, evolving to include collaborations with non-profit entities that offer social case managers, job placement, legal advice, financial coaching, and health services. 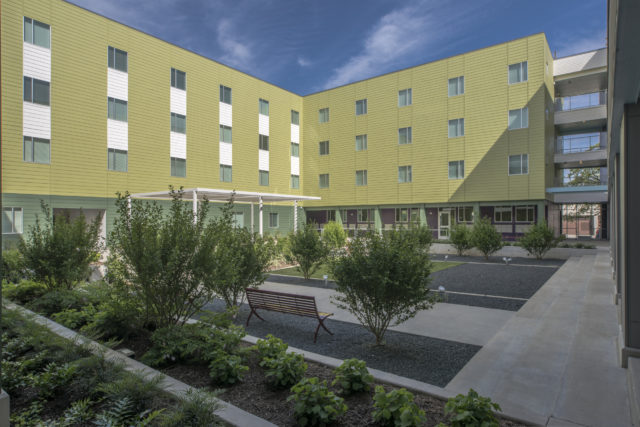 Is this what we would want if we lived here? The New Hope Housing staff person repeated this question throughout my tour of the Harrisburg building. The question speaks to the commitment and confidence of New Hope Housing. In some respects, the Harrisburg building outperforms many of the new market-rate apartment buildings where luxury amenities --- pools, exercise rooms, media centers, and espresso machines --- abound but the basics are often missing. The entry sequence to expensive apartments is often a serpentine path through dreary hallways. Materials are ornate but seem flimsy. Bedrooms and kitchens may lack adequate windows. The ground floor doesn’t engage the city.

Many of the problems at the luxury apartments stem from the “Texas Donut” form with their giant parking garages in the middle. New Hope Housing Harrisburg, in contrast, takes advantage of its proximity to rail and the city’s lower parking requirements for dormitory-style buildings. Ground-level retail is slated to open soon at this location, allowing a diversity of people and uses to co-exist. The top floor will house the entire New Hope Housing management. The multi-use program and public access to the location is viable through its proximity to rail, bus, and Downtown Houston. 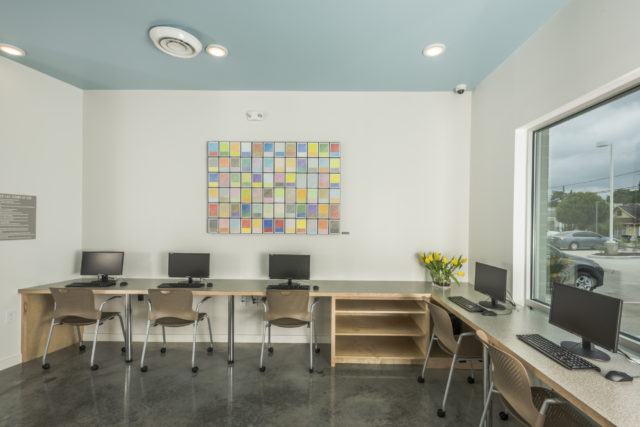 The Harrisburg building does leave some room for improvement. Even after seeing it for several months, the purple, green, and yellow color palette still gives me pause, though I do appreciate the effort to honor the tradition of vibrant colors and murals in the East End. Further, although a single shared kitchen makes sense for the complex, the communal nature of that room calls for more delight and openness in its design. And the courtyard could benefit from some type of water feature, even a small one, to soften the hard surfaces and summer glare.

What is most evident at New Hope Housing’s newest residential property is how an ethical design of form and program fully enables the constant orchestration of support services to its inhabitants. I have learned that the challenge of housing the most vulnerable people in Houston is exceedingly complex. Residents have to overcome many layers of challenges. What I saw at New Hope Housing Harrisburg is that excellence in design is part of the solution.