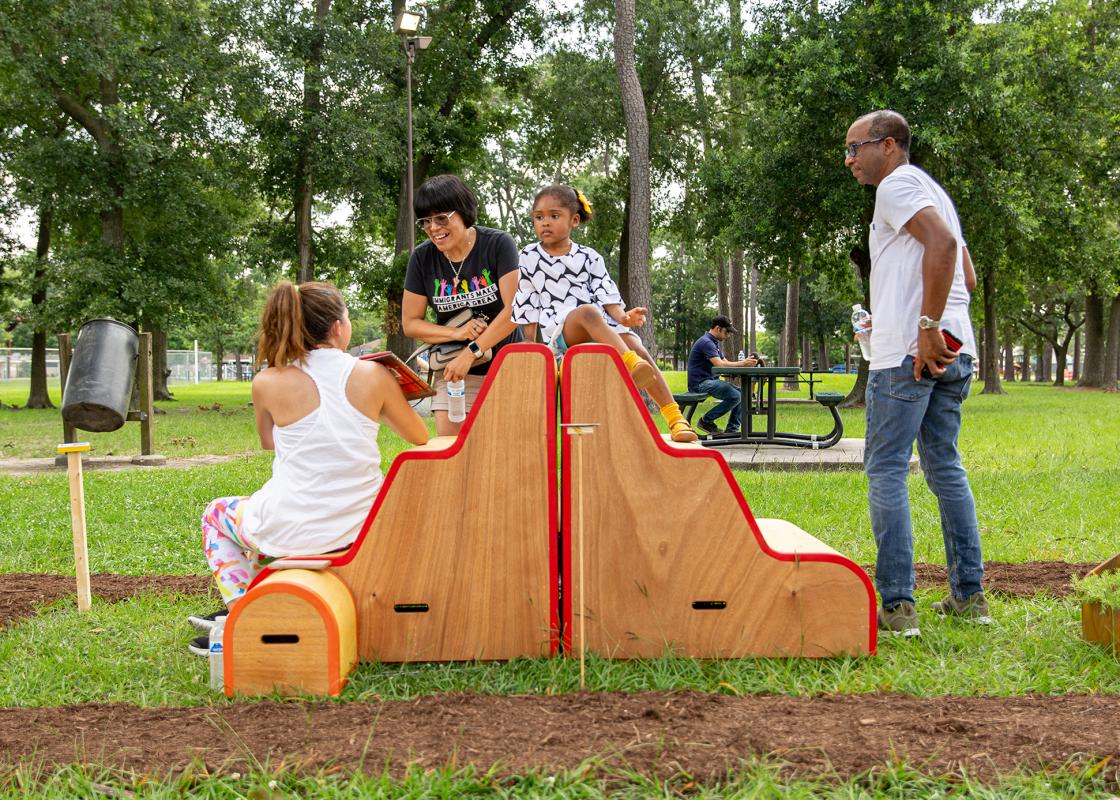 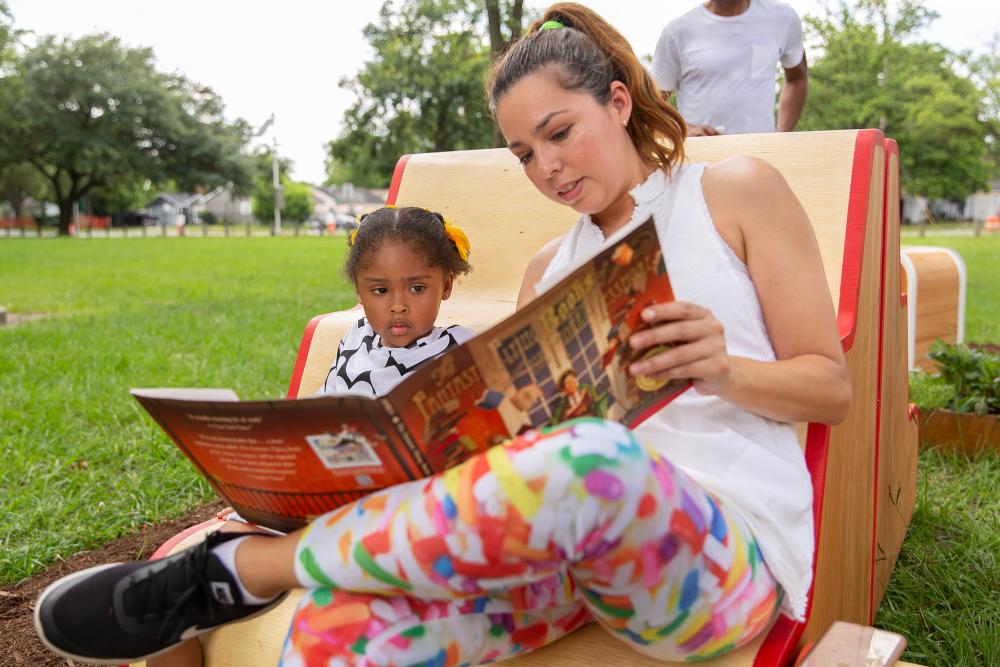 In Irvington Park, modular objects lay strewn across the lawn, baking in the Houston sun. A series of seats, bookshelves, and planters offers a public space to gather, converse, read, and learn. Whether passersby realize it or not, they’re engaging with a piece of public art far more complex than your average bus stop bench—assuming your bus stop has a bench.

The work is Rethinking Your Neighborhood by Violette Bule, a part of Insta11ations. A collaborative effort between Art League Houston and the Mayor’s Office of Cultural Affairs, the project spreads art experiences across Houston—one in each of the city’s eleven geographic districts. The initiative is an experiment with the public’s perception of public art. By partnering with artists who encourage interactivity, meditation, and education, in their work, Insta11ations seeks to redefine how we view and engage with art.

When thinking about public art, at times our imaginations limit themselves. We might think of historic statues or monuments or envision a grand sculpture or a painting simply “on view” outside. This grandeur isn’t a priority for Insta11ations. “There’s really great potential for public artworks to be sources of healing and justice and play and a foundation of joy in communities,” said Sophie Asakura, Public Art Manager of Art League Houston. “Sometimes we lose that when we talk about public art.” 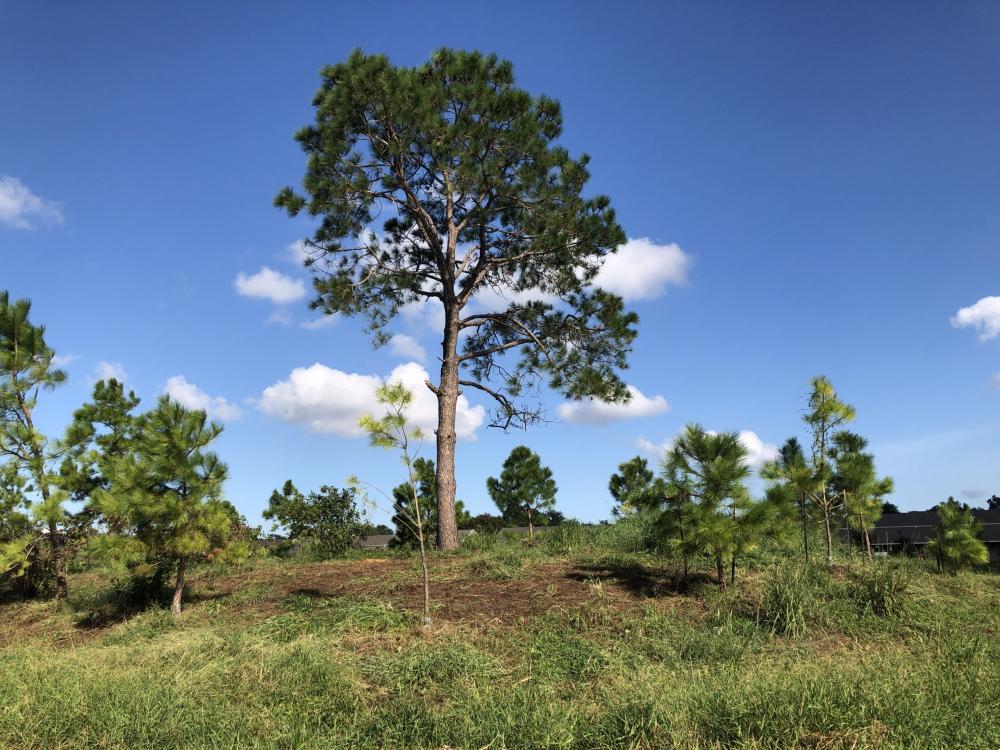 Public art holds the potential to symbolize a concept or shape public space, but how might the genre better serve us? With the rise of socially engaged art and social practice, the perspective of public artwork has shifted. Beyond surface-level aesthetics, more artists are looking deeper into how public art could impact, represent, and amplify awareness of the issues communities face.

In Houston, Project Row Houses is a great example of an institution that mixes art, social justice, and community growth. Rick Lowe, one of PRH’s seven founders, often shares a story that planted the seed of socially engaged art for him. On PBS NewsHour, he recalled that he

had a group of high school students at my studio. And this student came to me, and he said, “That's not what we need.” He said, “If you're an artist, why can't you create a solution?” 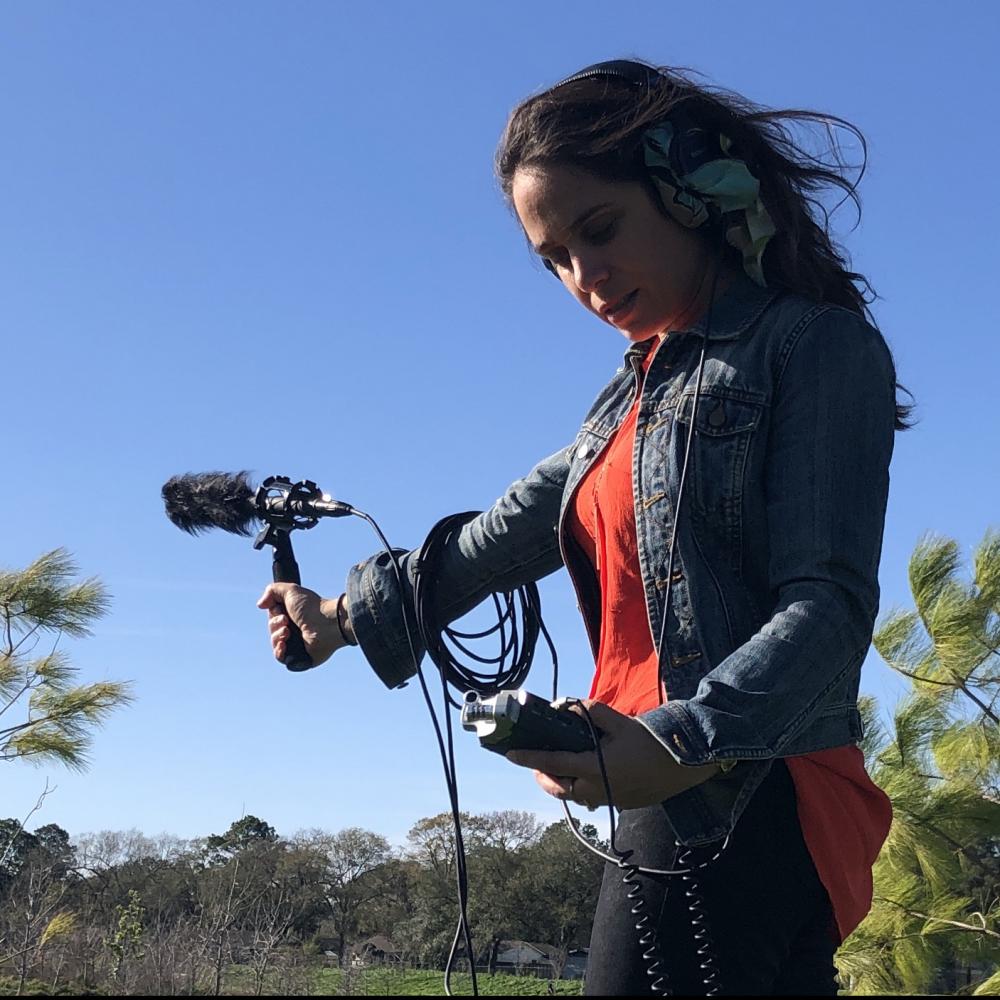 Lina Dib at work on "Sounds of Tomorrow – The Oracle Tree." Courtesy Insta11ations.

Solutions require communication and understanding to be durable fixes. The creativity that is inherent in the work of artists can generate new forms of dialogue. Often, through their work, they build bridges between concepts and perspectives. And when this effort is presented in public space—in the parks and on the streets of Houston—it can change the stories about how we value our communities. Famously, the Eiffel Tower didn’t change Paris; it changed how we see Paris. By offering ideas in direct, engaging, and intuitive ways, successful public art can do the same thing today.

In District H’s Northside Village, where Rethinking Your Neighborhood is installed, what remains invisible is the work that went into the project beforehand. In preparation for the installation, Bule met with people and organizations from the surrounding community to learn more about their wants, needs, and more. After distributing a survey, the artist gathered and organized information, making it accessible via QR code. With access to this information, both the public and city officials had a stronger understanding of what community members face.

According to the artist, the main points that arose in her discussions with the community were the “need for more community seating and lighting in public parks, a community library, and more public gardens and green spaces.” Bule’s objects were made in direct response to this feedback; through the provision of seating and lighting, the installation provides a place for conversation and gathering. With shelves and pots, communities have a means to share literature and grow plants. 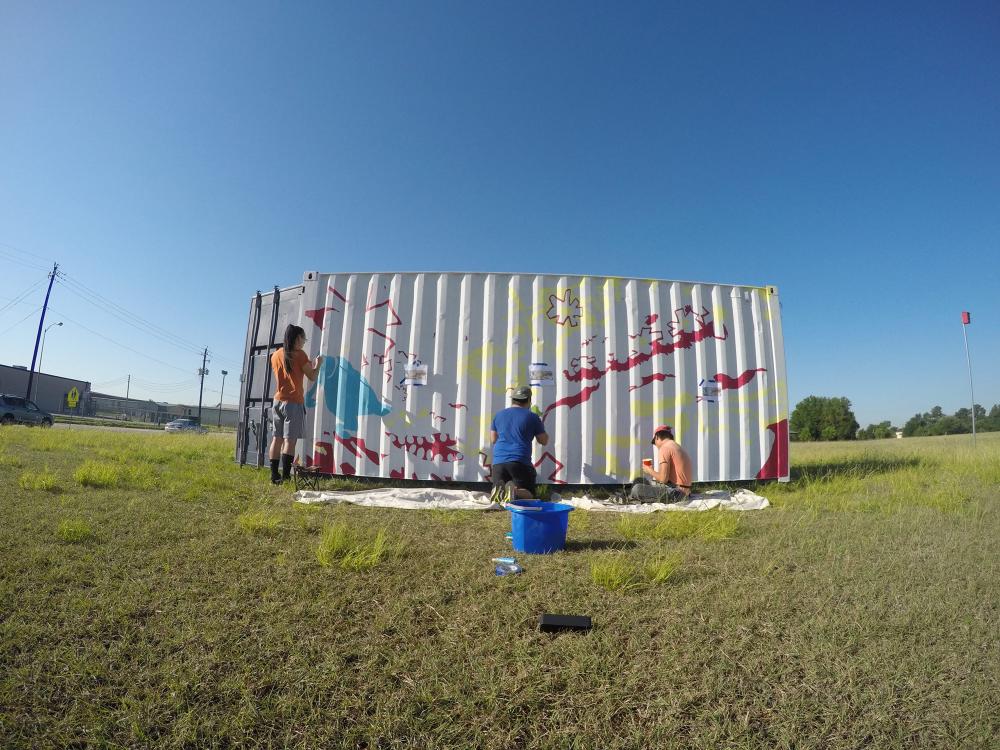 In another project, artist Antonius-Tín Bui partnered with Alief Art House, an ongoing project by artist Matt Manalo, to extend the scope of art to a community often isolated from arts culture in the city. When we think about Houston and the arts community, we think about the plethora of spaces and installations inside the Loop. Unfortunately, this concentration leaves other communities with limited options and access to the arts; their exposure is often limited by their availability to commute to see art.  By curating a broad spectrum of exhibitions, actions, murals, and happenings in the space, Bui has an opportunity to invigorate a community and spread the wealth of Houston’s art scene.

For Lina Dib, public art often provides a space for multifaceted interactions. Through her meditative installations, the artist offers glimpses into the restlessness animals experience in their compulsion to migrate. Blending their voices with those of humans, she provides a distinct perspective on how we view movement, borders, migration, and immigration. In her installation Sounds of Tomorrow – The Oracle Tree, she mounted two small speakers to a pine tree in Houston’s Exploration Green Conservancy. The soundscape she crafts blends bits relating to the weather with the sounds of the inhabitants of the park. In a bizarre yet beautiful way, it offers park visitors a new means of interacting with the space. 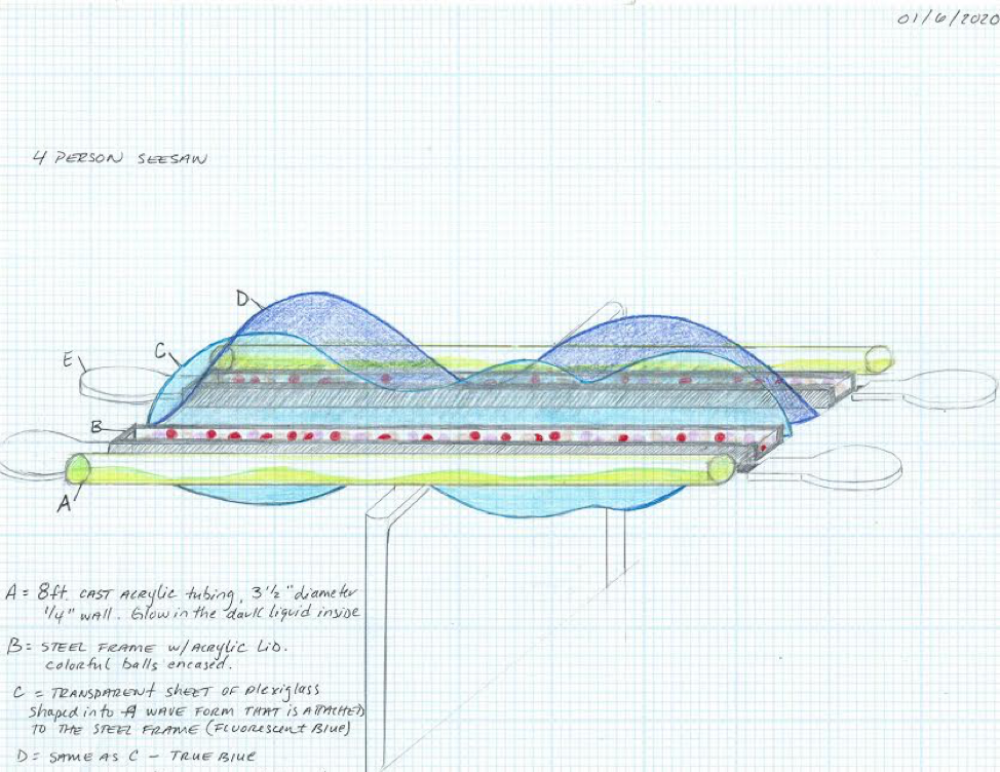 "Pockets of Beauty in a Field of Contamination," by Rabéa Ballin. Via Insta11ations.

In a forthcoming project titled Pockets of Beauty in a Field of Contamination and sited in District I’s Hartman Park, Rabéa Ballin will bring a sense of play to the public’s interaction with her work. The demographics and landscape of the area hit close to home for the artist. “Growing up in south-central Louisiana, it’s bloated with refineries,” she said in a video presentation. “When you grow up living and working around that, you think, ‘What is this doing to my insides…’” Overwhelmed with refineries, silos, and smokestacks, the East End suffers from increased levels of air pollution. To learn about this, Ballin sought assistance from the Toxic Tours of T.E.J.A.S. (Texas Environmental Justice Advocacy Services), an outing which the group has led for decades. As an educational tool, the tour highlights how the plants and refineries of the Houston Ship Channel spew toxins into surrounding neighborhoods.

Hartman Park boasts ample amounts of open space and beautiful trees. Unfortunately, the immediate view also showcases a series of industrial structures. With her project, Ballin seeks to recontextualize the shapes of the silos and plants while addressing a lack of color in the environment. Visitors to Ballin’s installation, set to open later this year, will encounter a re-envisioned seesaw. As they interact with the sculpture, they will see how the motion of the device sets colors in motion.

Insta11ations showcases what public art can do in Houston. Its artworks span a full spectrum between simple symbolism to physical access and engagement. Through creative intervention, these different approaches to making art for people together demonstrate a civic commitment to Houston’s communities.

Learn more about the full set of installations open or forthcoming in Houston at the Insta11ations website.

Michael McFadden is an art critic living and working in Houston. He is a graduate of the Arts Leadership MA program at the University of Houston and has worked with regional artists and organizations as an exhibition organizer, grant writer, and marketing specialist. Learn more about him at pugintheair.com.