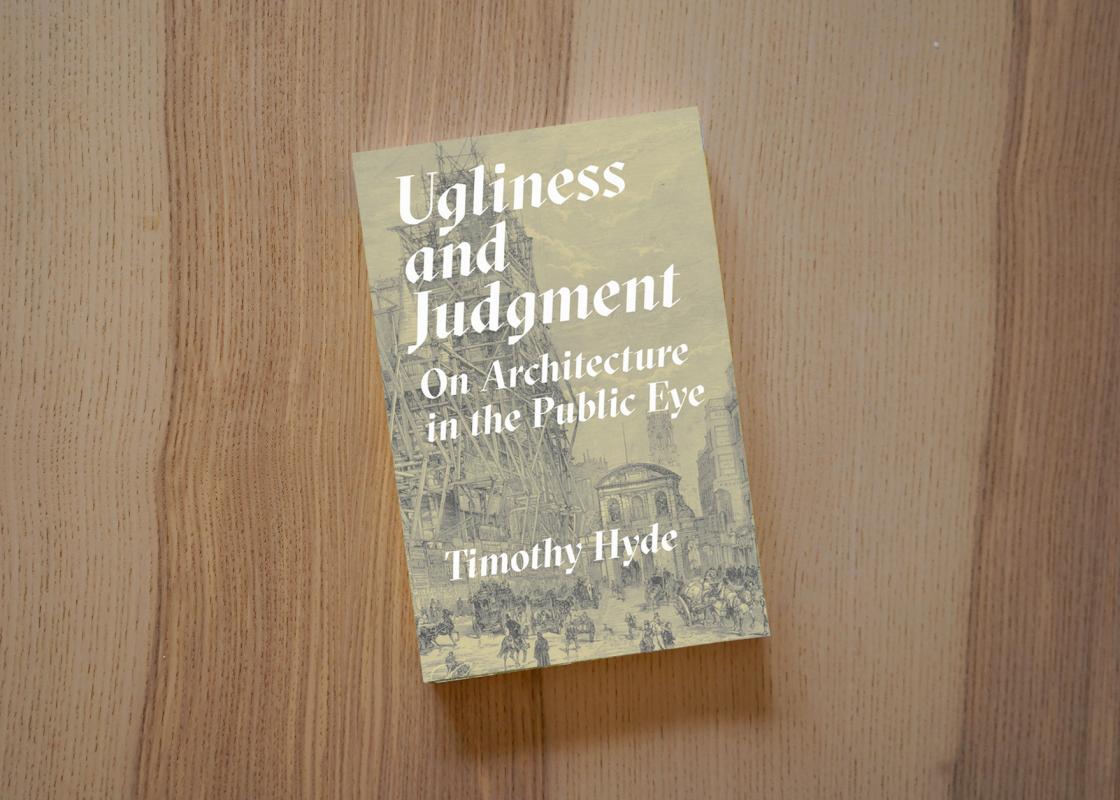 In his deeply researched account of the history of debates about architectural ugliness in modern Britain, Timothy Hyde, an Associate Professor in the Department of Architecture at MIT, demonstrates the value of calling buildings “ugly.” His interest is not in aesthetic theory, nor in definitions of beauty, but in the debates that dissatisfaction with buildings provoke, and the ways these debates shape what he calls “civic aesthetics.” One of Hyde’s concerns is the way architecture interacts with the world outside of itself, and particularly with social and legal realms. By “architecture” he means not only buildings, but the language, procedures, and processes that describe them and shape their making and meaning. Although doing so is not the chief aim of the book, Ugliness and Judgment: on Architecture in the Public Eye, published by Princeton University Press, makes a powerful case for architecture’s relevance in complex societies.

Hyde organizes six thematically-focused case studies into two parts. The first is concerned with building materials and the feelings, and thereafter, conversations they generate. Whether made of stone or concrete, buildings deemed ugly (explicitly or implicitly), the author demonstrates, may be bound up with experiences of “nuisance,” “irritation,” and perceptions of “incongruity.” These sensations in turn frame wider discussions about regulation, the nature of public expectations about space, and even religious authority. The second part concerns “Persons:” the architect, the profession, and the monarch. In each of these chapters he demonstrates how expressions of aesthetic judgment have shaped the roles and perceived authority of each of those persons.

Over the course of his text, we read about debates on the redesign of Bath in the eighteenth century; the deep anxiety provoked by the rapid disintegration of the façade of the Houses of Parliament due to industrial pollution; the intense public disapproval of brutalist housing estates; and even the fractious discussions about whether a pulpit designed by Henry Moore belonged in a church by Christopher Wren. Hyde insightfully dissects the historical relationship between architectural criticism and libel law; the figuring of the architect and the profession of architecture as abstract “persons” in the context of the complex networks of institutions that make decisions about the built environment; and, finally, the role and relative power of the state—in this case embodied by the famous architectural critic Prince Charles—in a system designed to exclude royal intervention in design decisions.

It is a fascinating book. In taking as a point of departure the limitations of aesthetics, Hyde invites readers to understand the assessment of aesthetic failure as a wedge that pries open conversations about inadequate, unresolved, or unsatisfying social and legal arrangements. Ugliness, in his telling, points to gaps in social, regulatory, urban, and institutional fabrics. The author implies that the value of listening to complaints about buildings lies in discerning the issues that encounters with “ugly” buildings bring to the fore. Quite often, he suggests, declarations of ugliness follow disappointed expectations. We find ugly that which does not seem to fit, or which does not comport with preexisting ideas. The discourse that follows these assessments turns quickly toward extra-architectural qualities. In the author’s words, ugliness “is the judgment of an irresolution and an insufficiency, but additionally is the instantiation of that insufficiency into social technologies, into concrete processes, customs, and institutions.”

What relevance might this discussion have for Houston? Perhaps quite a lot. This is the city, after all, that inspired a mini-movement and book entitled Houston: It’s Worth It.

Many Houstonians undoubtedly have private lists of the things they dislike about the city. Putting aside the obvious, non-architectural flaws—the oppressive combination of heat and humidity; the hideous roaches; the vicious mosquitoes—what ugly architecture might we identify that can open up productive debate? The sprawling form of the city itself is a starting point. Perhaps you find 26-lane freeways, acres of parking lots, and vast tracts of detached single-family houses set in dying (or, alternately, overgrown) lawns to be ugly. If so, according to a Hydian reading, you may also object to the state-sponsored privatization of public life on the one hand (by making suburban houses more affordable than ones closer in, by necessitating travel by car rather than mass transit, etc.), and to the public subsidizing of private interests (the oil industry, banks, property owners, road builders), on the other. Or perhaps you object to the concrete and the sprawl because you’ve been through one too many hurricanes and you know that more paving equals less rain-water absorption. And you are furious that flood control isn’t public priority number one.

Admittedly, this urban example is not “capital-A” architecture, but collectively it is perhaps a more relevant local test case for Hyde’s thesis than specific buildings might be. Indeed, Houston’s vibrant and sometimes chaotic tolerance of difference—nourished simultaneously by its near-total unwillingness to regulate real estate development and by its successive waves of newcomers—renders aesthetic judgments about “capital-A” architecture arguably less meaningful than they might be elsewhere precisely because the urban context is always already such a mess.

But let’s try anyway, with some made-up examples that could have been designed by architects and could be in Houston.

If you find ugly a 10,000-square-foot neo-Georgian suburban house, or one inspired by a seventeenth-century French chateau, it may be that you dislike the unabashed expression of belief of entitlement to profligately consume resources, which you find analogically related to broad economic inequality and environmental destruction. You would, in a Hydian sense, object to the social and political failures to address class-based inequities and climate change. On the other hand, if you can’t stand metal houses with flat roofs, large expanses of glass, and raking angles, you may object to them as acontextual and out of keeping with characteristic Houston neighborhoods. With such a critique, in a Hydian reading, you might be at the beginning of a debate about deed restrictions and historic districts.

If you are bothered by a new starchitect-designed concert hall (perhaps funded jointly by the City of Houston and a bevy of private donors), with its swirls and swoops, terraces, and cocktail bars, its palette of elegant and expensive materials, and prominence in glossy design publications, you may, again, dislike the formal and informal relationships between public and private capital. Or perhaps you object to the structures of celebrity jointly propagated by various media and the architecture profession. Or maybe you think that it is irresponsible to use taxpayer money to prop up bourgeois traditions like concert-going, when there are so many other, more pressing concerns to address.

Controversies about architecture that are about other controversies often stand a half-step away from politics. Surely this is why they are so fraught.

Hyde’s focus is Britain, and one is tempted to ask whether the processes he describes are comparable to architectural discussions in the U.S. The discourses he tracks are buttressed by circumstances and traditions quite distinct from ours. First, there is perhaps no country on earth in which literacy is as deeply rooted as it is in England, nor one that has comparably high standards of debate and public interlocution. Second, Britain has a long architectural history, and a public that is much better trained to care about it than we have here, as demonstrated, for example, by the scope and success of works such as Nikolas Pevsner’s Buildings of England series. Finally, discussions of ugly English buildings were shaped in several instances by the influence of the country’s well-funded and influential preservations societies—there is one each for pre-19th century architecture, Victorian buildings, and twentieth-century works. Can you imagine? This, in a country with a population less than one-fifth that of the U.S.!

And here? Alas, in every inbox, college class, and newspaper, evidence abounds that literacy is in decline. The first presidential debate of 2020 revealed in shocking fashion that our standards of debate and discourse have fallen to previously unimaginable lows. Our preservation organizations tend to be small and local, and they often navigate tenuous existences, as they are at once perceived as arch-enemies of progress and underfunded social clubs. On top of all of that, how much do we even talk about architecture, and do we even really care when it is ugly?

The Executive Order on Promoting Beautiful Federal Civic Architecture, signed by Donald Trump on December 21, 2020, confirmed that some people do, and strongly. The Order’s overt preference for historicist, and especially classicizing forms, linked historicism and beauty. It tediously rehearsed the claim that public opinion, not expertise, should govern design decisions, and took aim at architects, critics, and professors with the declaration that they were not members of the “general public.”

Like nearly everything about this administration, attempting to refute the assertions in the Order is as exhausting as the claims—and premises on which they are based—are infuriating. But the Order fits the patterns Hyde describes insofar as it is a thinly-veiled critique of the persons who shape architecture and the social and political commitments the authors of the Order imagine modernist buildings express. More ominously, the official preference for classicism belongs to a long history in the U.S. of linking that architectural language to political structures that supported patriarchy, white privilege, and slavery. Architectural historians are beginning to document these links. Two of the most notable examples of this work are the essays on Thomas Jefferson’s buildings by Columbia University professors Mabel O. Wilson and Reinhold Martin. [1] These should be read alongside anything the Trump administration publishes on architecture.

But there are reasons to believe in the positive power that comes in naming architectural ugliness, and that the act of doing so constructively has not disappeared entirely. Several years ago, and before the convulsions of the summer of 2020, the country began to look anew at its monuments—particularly those honoring confederate soldiers—and public spaces. We see them with even greater clarity now. Encouragingly, the debate is buoyed by a heterogenous group that includes anonymous protesters, artists, and citizens, but also academics like Dell Upton, whose book, What Can and Can’t Be Said: Race, Uplift, and Monument Building in the Contemporary South, would pair provocatively with Hyde’s. [2] In San Antonio, and before the Texas Historical Commission, high-pitched discussions of the most recent proposal to redesign Alamo Plaza have shone a bright light on contemporary racial politics and architecture. This opens up much needed conversations about how Texas history should be told.

As the final draft of this review was being prepared, and as the U.S. Congress met to certify the results of the 2020 election, domestic terrorists, incited by the words of a president unwilling to admit defeat, stormed and ransacked the U.S. Capitol, a classical building beloved by the nation. It was a scene of unprecedented, almost unbearable, ugliness. That such barbarism was directed at a building that would be classed as “beautiful” according to the president’s own terms, by members of the “general public,” embodies the vorticial entangling of illogic, destruction, and ugliness that defines the Trump administration. May the images of that day give us the clarity and courage to build a society based on true beauty.

Kathryn O’Rourke is a historian of modern architecture and is Associate Professor of Art History at Trinity University. She is the author of Modern Architecture in Mexico City: History, Representation, and the Shaping of a Capital (2016) and the editor of O’Neil Ford on Architecture (2019). Her current book project is Archaism and Humanism in Modern Architecture. O’Rourke is president of Design|Forum, a San Antonio non-profit.

[1] Mabel O. Wilson, “Notes on the Virginia Capitol: Nation, Race, and Slavery in Jefferson’s America,” and Reinhold Martin, “Drawing the Color Line: Silence and Civilization from Jefferson to Mumford,” both in Race and Modern Architecture: A Critical History from the Enlightenment to the Present, edited by Irene Cheng, Charles L. Davis II, and Mabel O. Wilson (Pittsburgh: University of Pittsburgh Press, 2020), 23-42.

[2] Dell Upton, What Can and Can't Be Said: Race, Uplift, and Monument Building in the Contemporary South (New Haven: Yale Unversity Press, 2015).