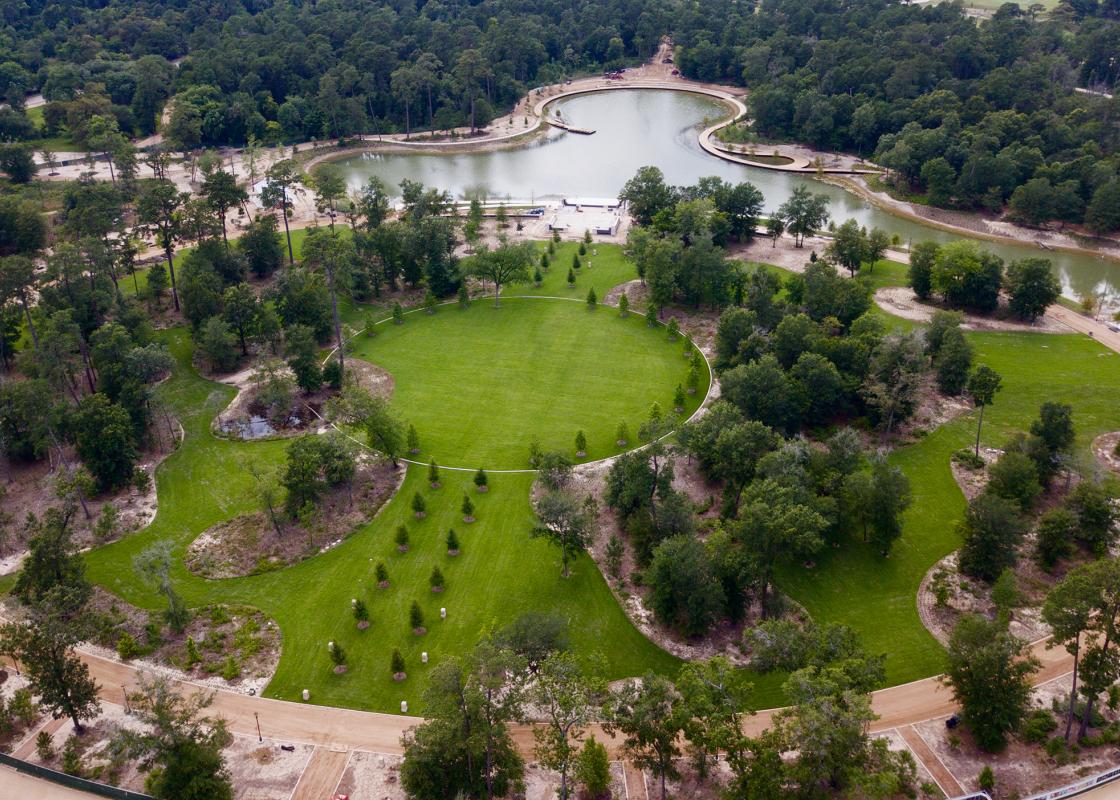 In August, the Eastern Glades opened to the public as a much-needed greenspace during our unending pandemic. This 100-acre area is the first step in realizing Memorial Park’s Ten-Year-Plan, a masterplan for the park that was “accelerated” after a $70 million gift from Kinder Foundation. Clay Family Eastern Glades, designed by Nelson Byrd Woltz (NBW), advances the legacy of the park by curating experiences that speak to its history and natural environment. This park is much more than a first step. Rooted in research, it creatively exhibits the governing design principles for the entire masterplan. 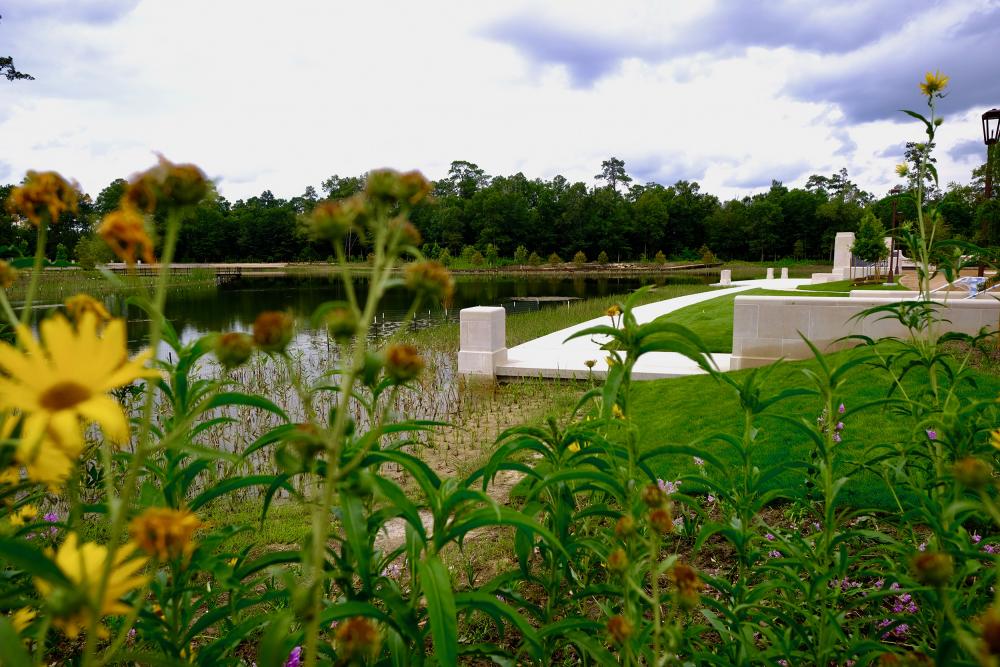 Frederick Law Olmsted’s Central Park in New York City is roughly half the size of Memorial Park—1.32 square miles versus 2.3 square miles, respectively—but while the former is a major element of Manhattan (about 23 square miles), the latter is lost in Houston’s expanse (637 square miles). Acreage aside, the Texas landscape may have influenced Olmsted in some small way as, years before winning the competition for Central Park, he rode on horseback through this land making detailed observations of winds, growths, and the “rich blue and pure as crystal” waters. When I had the opportunity to first visit the Eastern Glades—though not on horseback—there was also a sense of the wild commingled with the crafted. It is a place where the historic echo contrasts with the machined detail. In short, it is a new park within the park that I’ve known for twenty-two years as a Houstonian. But even as a new place, its beauty arrives progressively. Onsite, I was reminded of another observation by Olmsted from his description of his first visit to England in 1850: “Gradually and silently the charm comes over us; we know not exactly where or how.”

Perhaps an updated observation might be: “Silently, a resilient park is revealed to us.” Houston parks, like our spirits, are forged to bounce back. In this case, Memorial Park is recovering from the damage caused by intense drought in the early 2010s. We are fortunate that a chain of good decisions, design, research, and support facilitate green spaces continues to align and exhibit our ecoregion. This can be seen in Eastern Glades’ bold, regionally appropriate details like the boardwalk within the hardy layers of the wetlands that brings you closer to nature yet privileges the flow of habitat below. Many of these collisions are exactly where the park’s charm begins.

Prior to being the domain of joggers, strollers, and cyclists, Memorial Park was originally Camp Logan, a military training ground during World War I. NBW’s design identified weathered and lesser known trails as a starting point in shaping access to the ecologically distressed parkland. As a result, some of the trails in the Eastern Glades reference paths from the former camp. NBW’s scheme used three gestures to unite the park. First, East Memorial Loop Drive was relocated further east in order to capture 100 acres of uninterrupted parkland. Second, the well-traveled Seymour Lieberman Trail is similarly extended around the edge of this expanse, naturally bringing users into this new area. And third, a new axis is extended from Blossom Street around which the new landscape is organized. 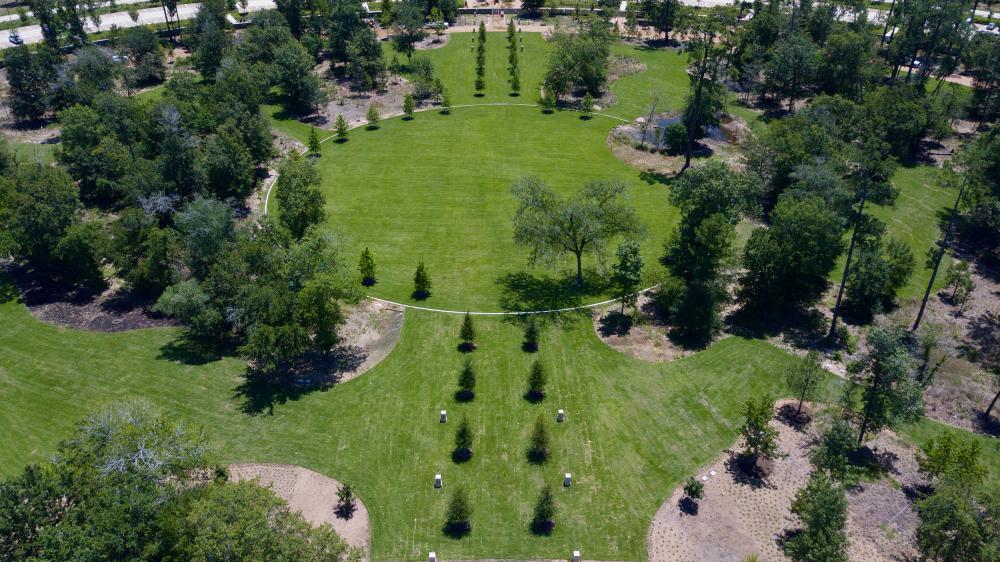 Since the first stirrings of Hermann Park in the 1910s, Houston has long been wed to parks with grand organizing figures. At the Eastern Glades, there is a notable formality to its broad axis marked by generously spaced pines. The axis in inscribed within a larger, seemingly formal ellipse. The elliptical frame dissolves into natural, playful groupings of meadows and grasses that engage families, groups, and individuals. This is where the lawns and trees mingle, the actual glades of the park’s name. This shape is most legible from above and while it is the most formal moment, the ellipse is so big that, to this urbanist, it summons Camillo Sitte’s description of curving streets as providing “ever changing vistas.” In the glades, to walk along the outer curvature is to be continually seeing into and across realms of less formal planting pockets, passages, and pavilions. These places make the lawn accessible, approachable, and already familiar. The Central Lawn is circumscribed with a band of inscriptions that feature over fifty unique quotes from Houstonians answering the question “What does Memorial Park mean to you?” and were curated by Madison Petaway, Houston’s 2020 Youth Poet Laureate.  The distribution of plazas and terraces along the axis contribute towards reading the expansive territory of the park. Materially, the contrasting character of the Art Deco-style East Terrace and, opposite, the more contemporary West Terrace balance how each meets Hines Lake. The East Terrace is a moment of celebratory “arrival,” while the West Terrace recesses into the trees and maintains a more “natural” setting. 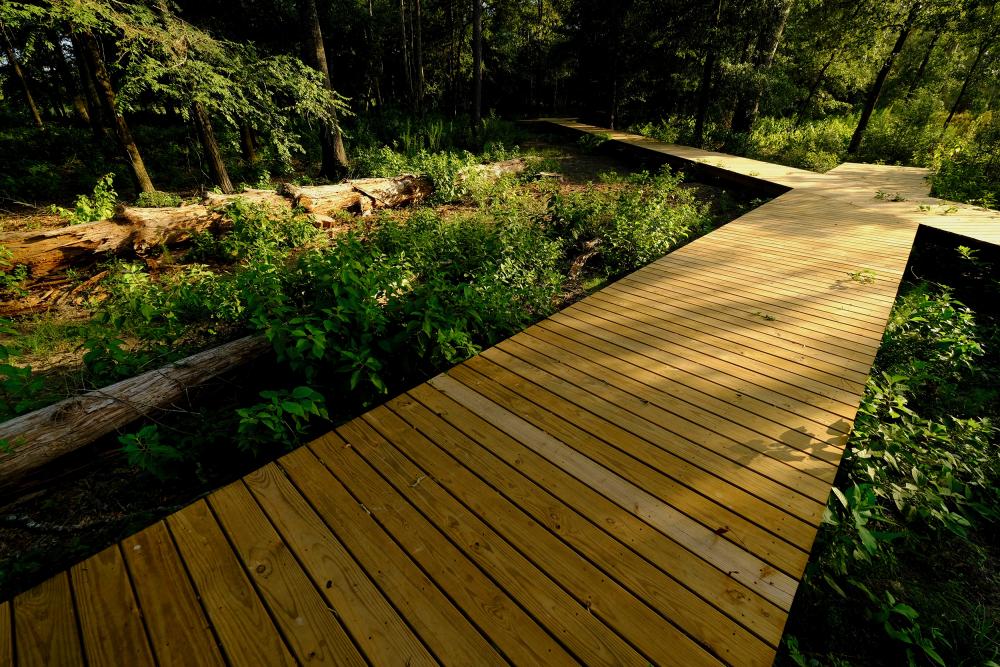 The concepts of “changing vistas” and visual linkages are best expressed on the boardwalks over the wetlands. These are a personal favorite. Piers just barely peak from the wetland wild growth and disappear into robust lintels. In short, these boardwalks are built unlike your average domestic decks; they are structured like Texas freeways and I like it. The paths, however, are no freeways. They are built for repose—to take in nature, meditate, or let people pass in this pandemic climate. The paths themselves can be interpreted as a collection of overlapping geometries that weave through trees over the wetlands by extending past each other in smaller, more intimate extensions into nature. This nuance in detailing is rewarding in the additional layer of experiences where you can take a continuous path, or step away and claim a moment. This smart placement of decking is result of an intense inventorying process of trees across the glades: The cataloging allowed the design and client team to deftly remove invasive trees and seedlings so that native trees and plants might thrive in the wetland’s robust soils.

The park functions at several levels. There are civic spaces recalling the site’s ceremonial history; the popular social grounds of the pavilions, the Central Lawn, and the Live Oak Court accommodating food trucks; the natural grounds that wetlands and native habitat; and, lastly, the site’s performance criteria that provides stormwater management strategies of rain gardens, bioswales, and an amenitized detention lake. When appreciating the water, one’s eyes are drawn to its planted edges and then up to the tall trees beyond. In this orchestrated moment, it’s easy to forget the engineered purpose of the pleasant lake: It absorbs runoff so that this water can be recirculated to irrigate the site. 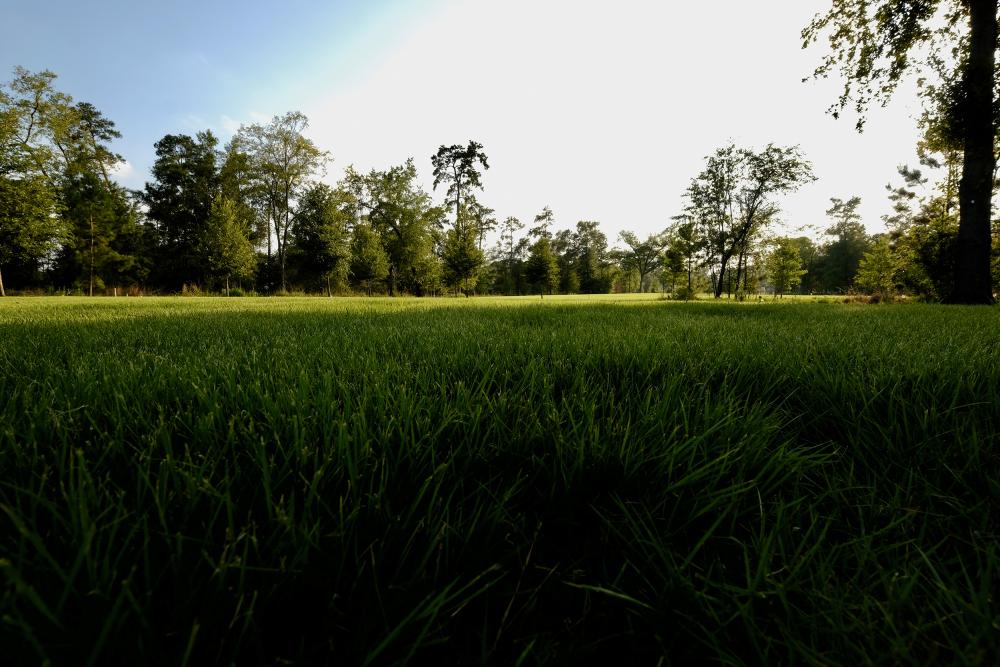 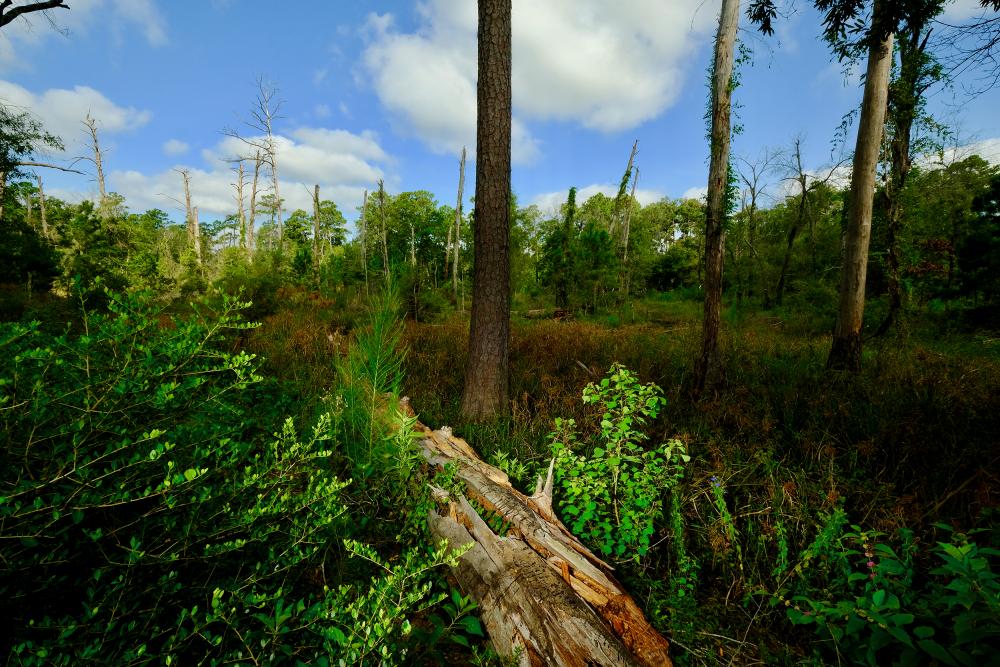 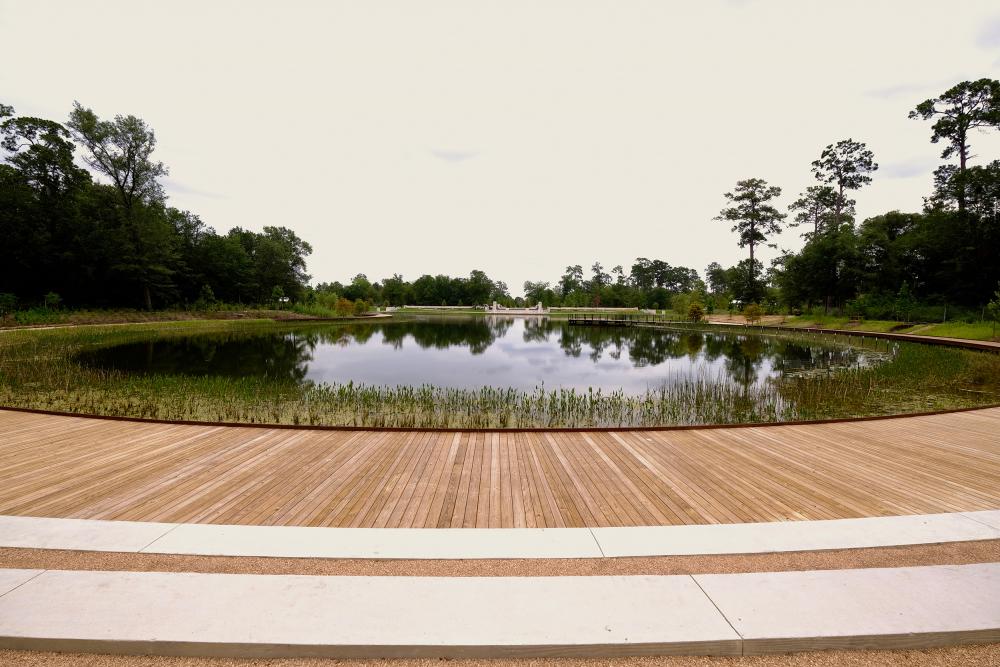 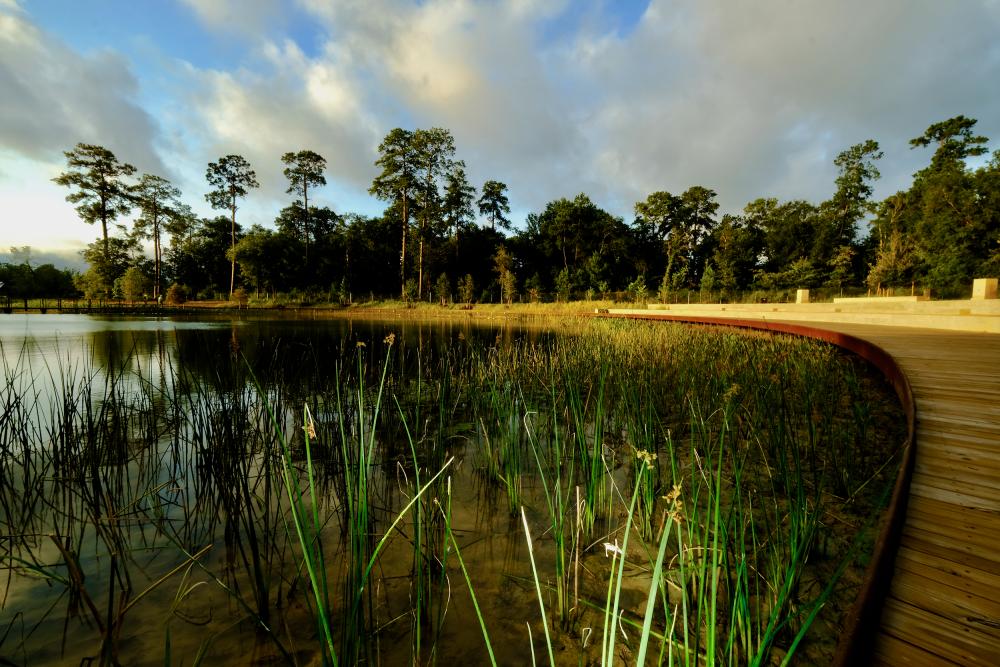 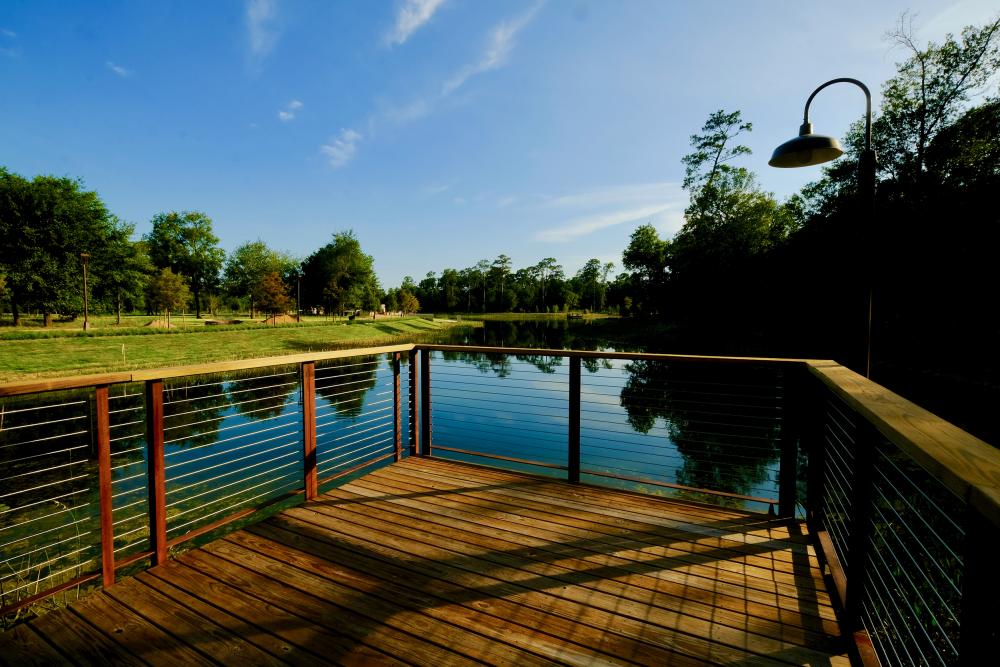 What sets Eastern Glades apart for me is its tame spatial beauty that seems perfectly sensible against the backdrop of a tree canopy line that residents—myself included—have known for so long. I frequented the park twenty years ago for the Seymour Lieberman trail, which was the only reason I came to Memorial Park (I often pretended to jog and instead grabbed a burger at Beck’s Prime). The landscape architecture has taken something so familiar and revealed its “gradual silent charm” through attentive, deeply-rooted built and natural surfaces. Like every great design success, it appears inevitable. You see it, but you also feel it in the park underfoot.

NBW, the firm who designed Eastern Glades, is the same office that developed the master plan for Memorial Park. The firm’s approach to each project is striking. In conversation, Thomas Woltz said that “there is no empty site,” meaning that each piece of land deserves deep research into the history and ecology of that place. NBW was selected to work on Memorial Park due to their sensitivities with ecologically distressed public spaces and their research-based approach. There is a buoyancy in their work that adapts to local languages; they acknowledge histories while avoiding being revisionist. The park is a shared success because the design and client teams clearly knew what they wanted to leave as a legacy to their city.

And now we’re on to the next step, as the construction staging is in place to begin work on the land bridges over Memorial Drive, estimated to be finished in 2022. Houston’s resourcefulness shines through, as the dirt removed to make Hines Lake will be used to mound over the roadway, creating yet another destination for Houstonians to explore.

Amna Ansari is a practicing architect and urban designer in Houston. She is currently Chair of the Houston AIA Urban Design Committee, and she holds a Masters in Architecture and Urbanism from MIT.