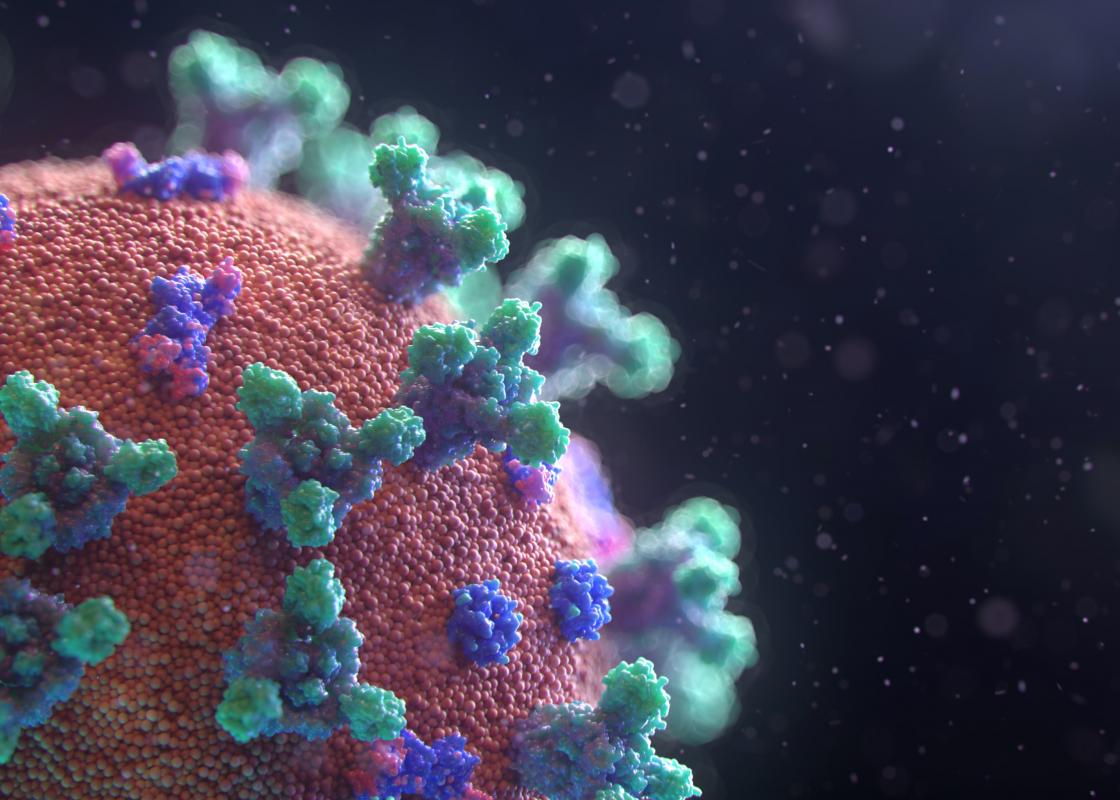 The effects of COVID-19 and its related vaccines do not effect all Houstonians equally. Photo by Fusion Medical Animation via Unsplash. 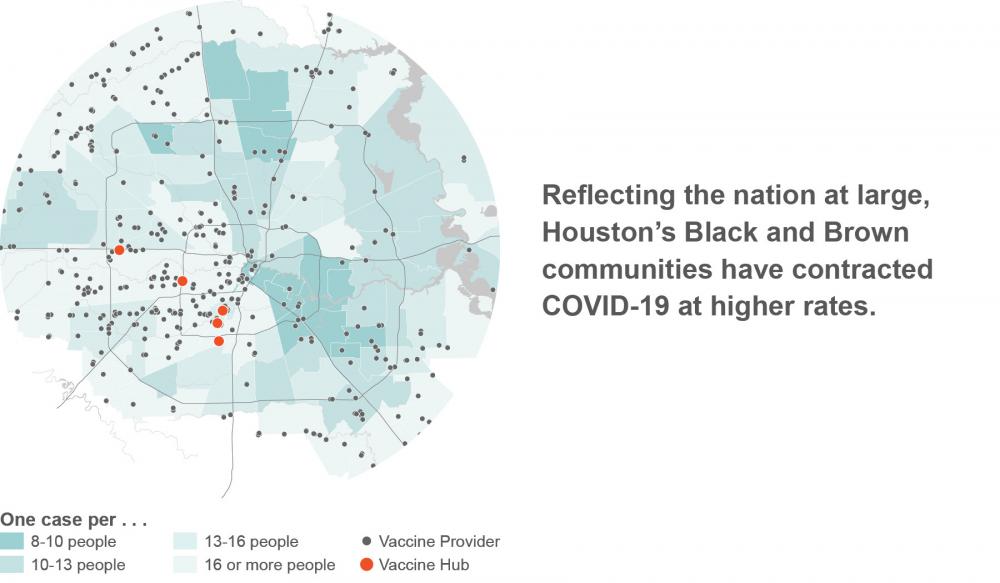 As states begin to receive and distribute COVID-19 vaccinations, racial segregation is significantly impacting access. In Houston, vaccine hubs and providers are not located within communities that have been most severely impacted by the virus, but rather clustered where resources have long been established. This corresponds with where white and BIPOC Houstonians generally reside—more evidence of Houston's geographic and racial inequity. 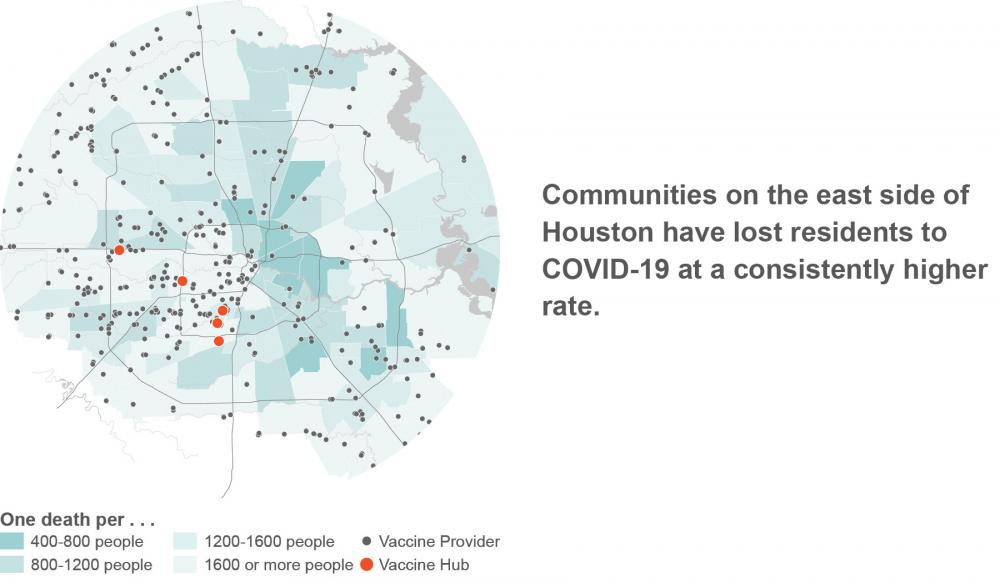 In anticipation of these disparities, the National Academies of Medicine (NAM) was commissioned by the CDC in fall of 2020 to formulate a framework for the equitable allocation of the vaccine. Their report recommends direct mitigation of health inequities through prioritization of areas in accordance with the CDC’s Social Vulnerability Index. Still, three months later, making decisions on where to focus efforts through an equity lens has proven controversial. Last month, as reported in the Texas Tribune, Dallas County Commissioners Court voted to prioritize individuals from 11 majority Black and Latino ZIP codes based on increased vulnerability to the coronavirus. However, after Texas state officials threatened to cut the City’s vaccine supply, Dallas leadership reversed their decision.

In Houston, it is indisputable that the pandemic has exacerbated racial disparities. Houston is aggressively segregated, with the majority of our most vulnerable communities located east of the IH-45 corridor and the majority of our resources concentrated in wealthier, whiter neighborhoods west of downtown. Reflecting the nation at large, Houston’s predominantly non-white communities have contracted COVID-19 at higher rates, and cases in these communities have been more likely to result in death. In the majority Hispanic or Latino Magnolia Park neighborhood, for example, one in every 400 residents has passed away as a result of the virus. 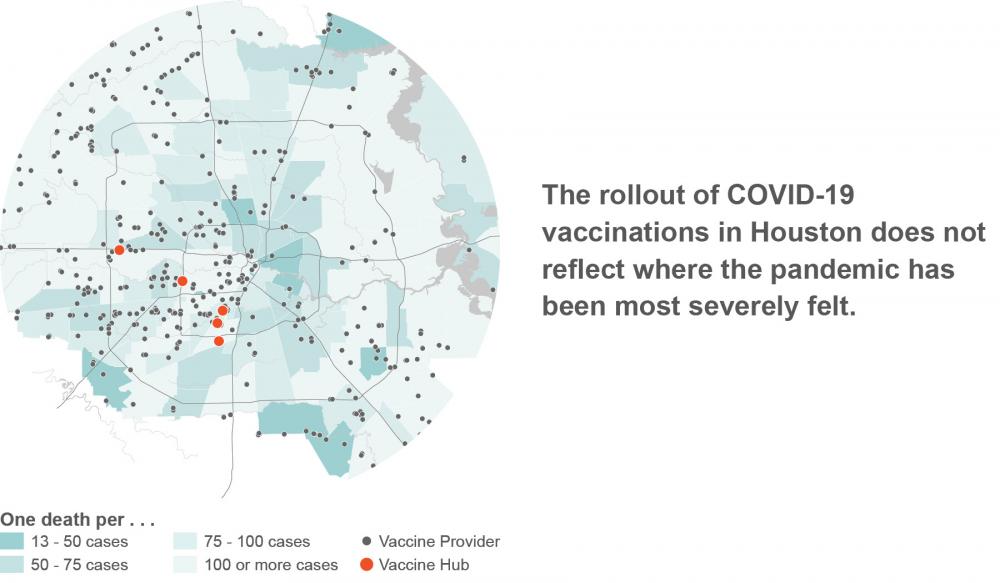 Yet, the roll-out of vaccinations has not reflected what we know. Vaccination sites are glaringly sparse in neighborhoods where the pandemic has been most severely felt and are instead overwhelmingly located in the same neighborhoods as the rest of Houston’s resources. Further, lack of direct access to vaccination sites is magnified by existing intersections of privilege. Residents who do not live near a site are less likely to have the internet access needed to find one outside of their neighborhood and set up an appointment, the vehicle needed to drive to that appointment, or consistent health insurance coverage that would provide experience navigating the medical industrial complex in general.

As vaccines proliferate, another more qualitative disparity has come into play: the privilege of having been cared for in the past. Established patients of area private hospitals, such as Methodist, who qualify for the vaccine are receiving texts and calls instructing them on how to schedule a shot. For those without a provider, the barrage of information sent out by the City and County has not made the path to vaccination simpler. Information changes daily, sometimes even by the hour, as did information on COVID-19 testing throughout 2020. Registration sites have crashed repeatedly, and too many people are already exhausted by nearly a year of suffering. Accessing these ever-changing updates is also dependent on internet access, a necessity that is not universally available. In 2018, census survey data showed that more than one in every four Black and Hispanic or Latino households did not have access to Internet services, while less than one in every ten white households were not connected. 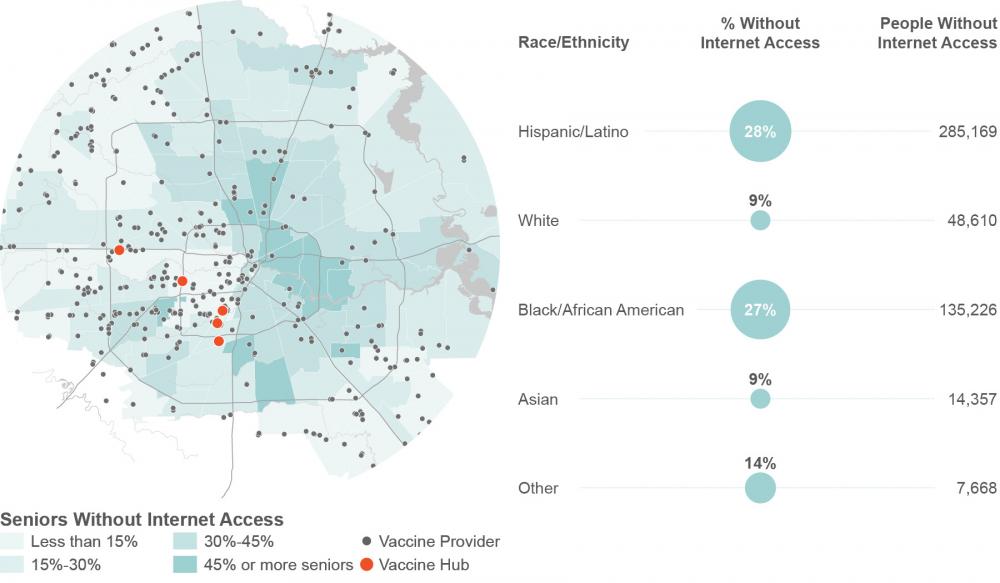 As the cards stack up against Houston’s most vulnerable, the historic exodus of healthcare from under-resourced communities is starkly clear. Lyndon B. Johnson Hospital is the only hospital serving northeast Houston. In fact, hospitals, doctors’ offices, pharmacies, and even grocery stores follow the same pattern of disinvestment as all other vital resources for human survival in our city. So, even if the vaccine is in abundant enough supply to be delivered to every eligible healthcare site, the same message will be reflected back to us by nearly any data mapped: The consistent lack of care given to our Houston neighbors is pervasive and fatal.

Equity is not simply ensuring that the vaccine is available everywhere. There is increasing evidence that even when vaccination sites are set up in under-resourced communities of color those showing up to get stuck are predominantly white. Rather, equity is understanding and addressing the layered barriers that exist for hundreds of thousands of people to even know how, where, or when to sign up for a vaccine.

There is a clear need for a national plan informed by what we know about health inequities to guide decisions at the state and local level and prevent the continued auto play of systemic racism. We cannot afford to tolerate opposition to prioritizing an "equity lens" in decision-making. Threats such as those made by the State of Texas against Dallas leadership are in the most essential sense threats against residents’ very lives. 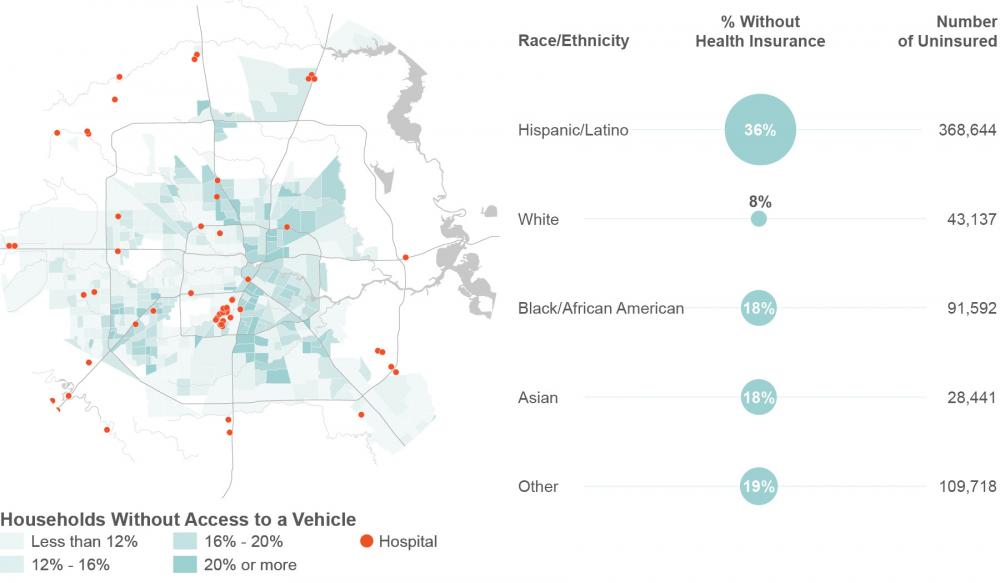 Whether or not people deserve to survive should not be broken down by ZIP code. For every person who has gotten the vaccine without qualifying under the requirements of either phase 1A or 1B, there is a Houstonian in urgent need without the tools to access their shot. Ask yourself why, systemically, those you know who have received the vaccination before their time have been able to do so, and whether that is evident of a city you would like to call home. As humans, we cannot skip the line regardless of how special we think we are, we must all wait our turn with equal measures of patience and hope.

A version of this essay previously appeared on Kinder Institute for Urban Research’s Urban Edge on February 15, 2021.

Susan Rogers is the Director of the Community Design Resource Center (CDRC) and an Associate Professor at the College of Architecture and Design at the University of Houston.

Katherine Polkinghorne is a research assistant at the CDRC and in her final year of studies at the University of Houston.

The graphics were created by José Mario López, who is a program manager at the CDRC and holds a Bachelor of Architecture from the University of Houston.

Cynthia Cruz and Maria Noguera of the CDRC also contributed to the graphics.