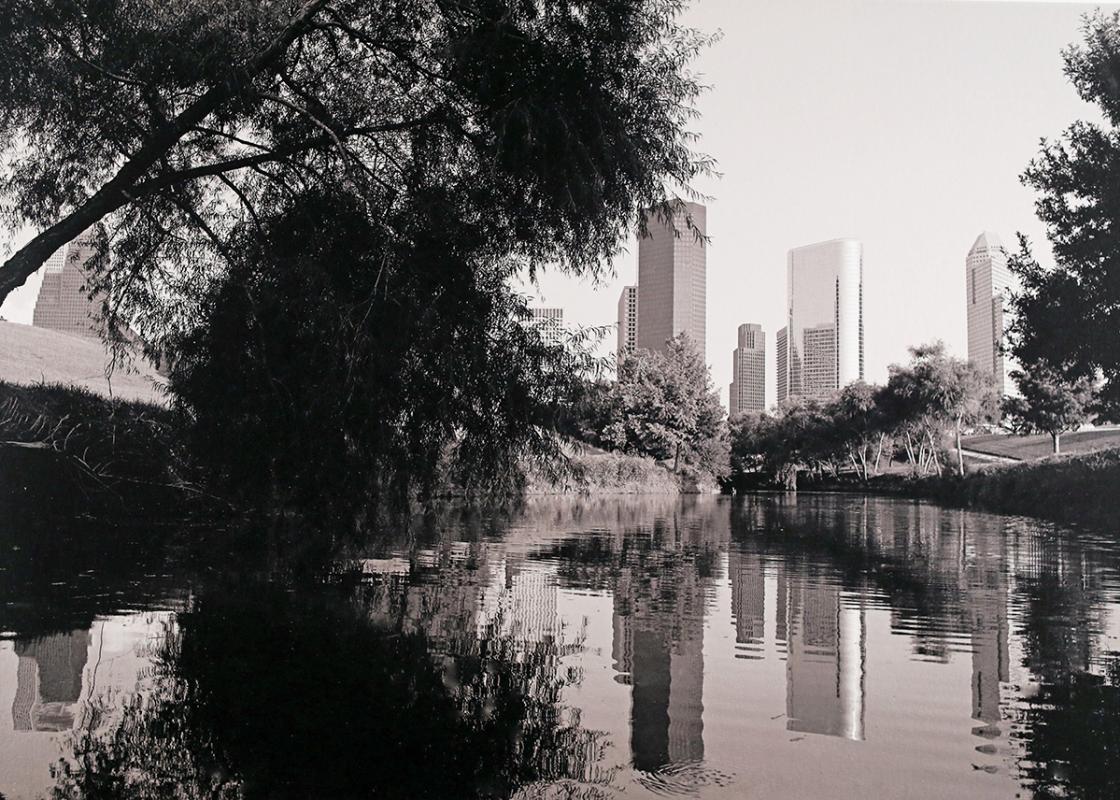 Photographer Geoff Winningham has curated Buffalo Bayou: River of Life, an exhibition on view through November 28th at Flatland Gallery on Westheimer. (He previously published Along Forgotten River, a book of images of the waterway.) In the exchange below, he talks about the exhibition and shares about his encounters with Houston’s historic stream.

An audio version of this interview previously appeared on the City Cast Houston podcast, which is hosted by Cite’s former Managing Editor Lisa Gray. Follow it wherever you get your podcasts. You can also sign up for the City Cast Houston newsletter, which Gray sends out on weekday mornings.

Lisa Gray: When was the first time you saw Buffalo Bayou?

Geoff Winningham: It was an unforgettable experience. I had the good fortune that Texas Monthly called me and said, “We have an article that has been written about Houston by Jan Morris.” They assumed I knew who Jan Morris was, which I didn’t. She’s since become my favorite writer in the English language. She was an eminent historian. She wrote this fabulous essay on Houston titled “City of Destiny,” which ran in the October 1981 issue of the magazine with my photos. 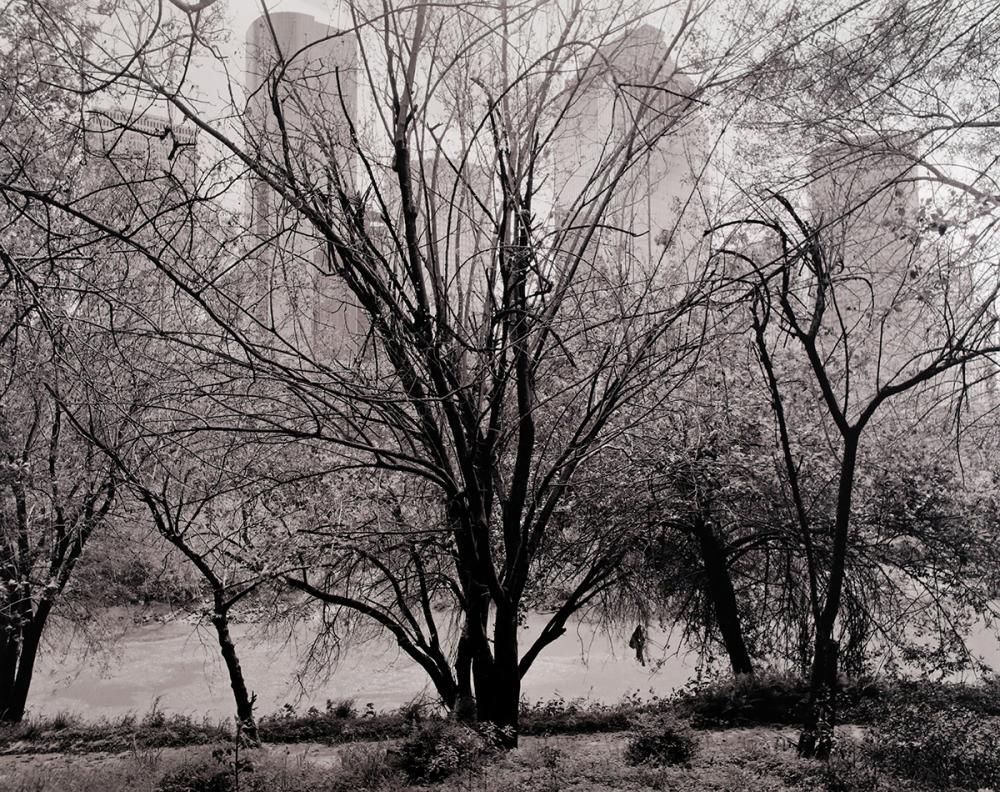 In the eighties, it wasn't like it is now. She wasn't entering Buffalo Bayou Park.

It was wild and there were what she described as hobo camps down there and the brambles, bushes, and foliage. She described wandering down there among the dandelion fluff and seeing the ponderous dragonflies. And she said, “I had found it. I found the womb of the city. It's ancient hollow.”

Holy cow! When I read that, I thought, “How have I not found that?” And I hadn't. I lived in Houston off and on for seventeen years and I think I must have heard the name Buffalo Bayou, but I'd never thought about it or considered it. So, I went. That was my first experience photographing Buffalo Bayou in June 1981.

What was it that fascinated you from the beginning?

I got fascinated with tracing it to its source. Over a period of months, in my own timid way, I became an explorer. Each weekend I would go a little bit further out on I-10 and take whichever road went south. Just south of Katy, off of Pin Oak Road, I asked this kid named Ryan, who I found walking on the side of the road, “Do you know where this stream begins?” He said, “Oh, it starts out there in that pond with all the alligators!” The alligators turned out to be a myth, but the pond was there, so I named it Ryan’s Pond.

For several months I thought this was the source. I would go out every weekend and photograph the wild pigs, bull frogs, water moccasins, and the beautiful pond. Because I’m not much of a naturalist, it took me months to realize that this wasn’t the source; there are actually three streams leading into Ryan’s Pond. So I followed each of those streams until finally I found the source, which was basically the rice fields of the Katy Prairie. The drainage off those would form these little channels and the challenge would become little creeks. Then the creeks fed into Ryan's Pond, which overflowed with a little waterfall and became Buffalo Bayou. 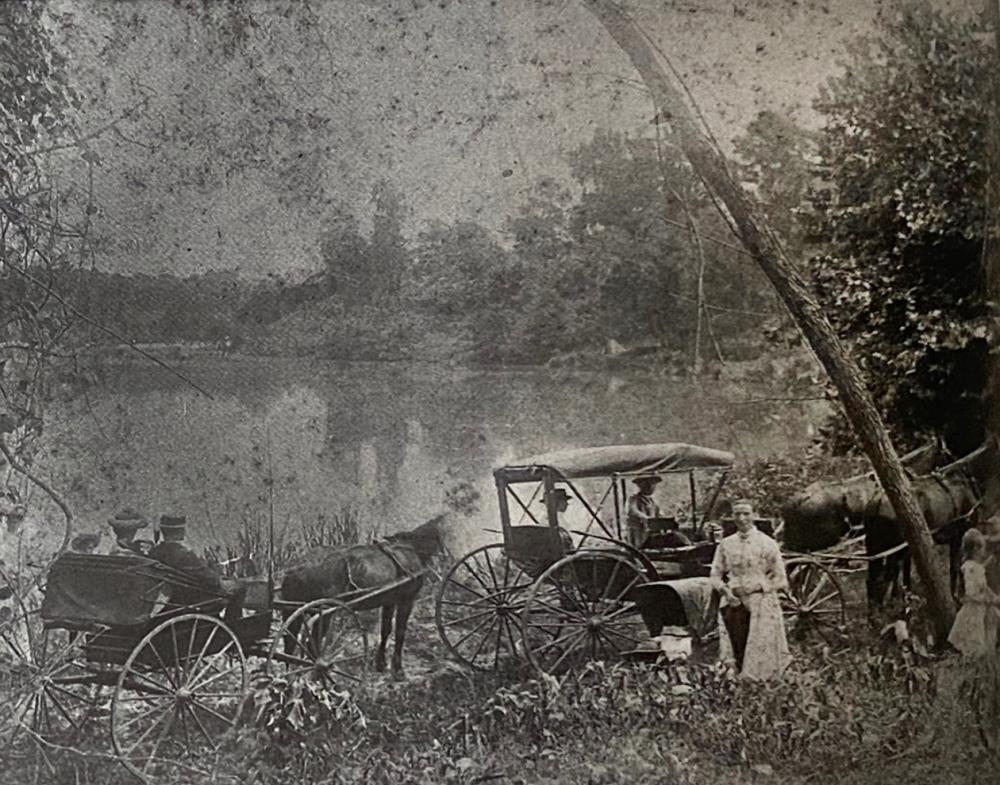 Along Buffalo Bayou in the 1890s. Courtesy Geoff Winningham.

I keep going back to what Buffalo Bayou must have looked like then, at least the parts between downtown and Galveston Bay. When I got to Houston, I thought the word bayou meant “paved drainage ditch.” What was it about that brown water that got you?

Two things. First of all, it was a bit wild. Even by downtown, there was the brambles, bushes, and trees, and the density of it all. It felt like a bit of wildness right there in the city. There were points where you could visually see the confluence and the contest between the natural landscape trying to survive and the city being built.

The other thing is that I had come off of decades of photographing celebrations, events, and human festivities. I think I was getting older and wanting to be a bit more meditative about my work. So I'd take my big view camera and eight or ten film holders and I'd go spend four or five hours just tromping along the banks of the bayou looking for things that seemed interesting and true and beautiful.

Let's talk about the show.

Once we decided that we wanted to do a show and sell the work to benefit two bayou-related organizations. I have about fifty photographs that I've donated to the show. Then we decided to add thirty-two artworks by children who participated in my Pozos Art Project, which I founded with my then-wife Janice Freeman. 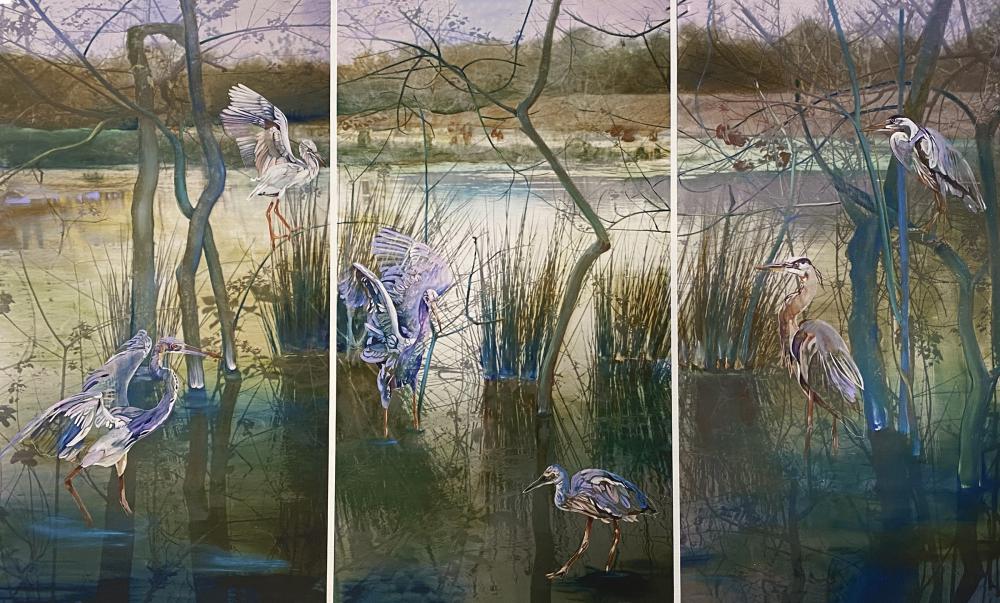 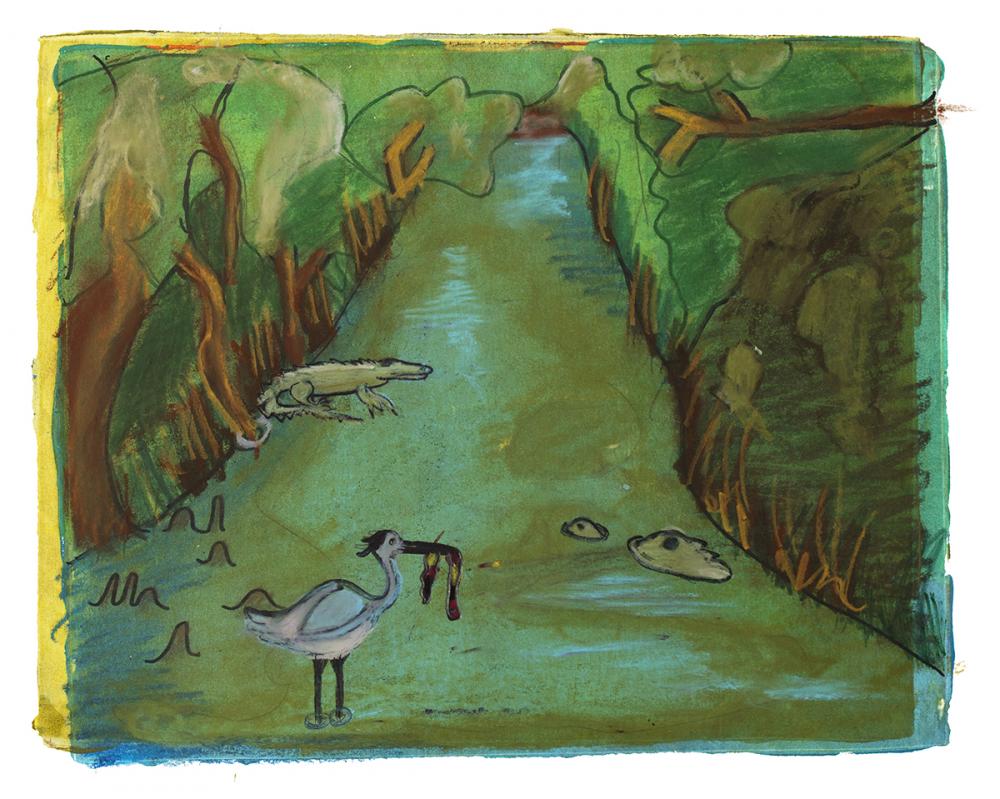 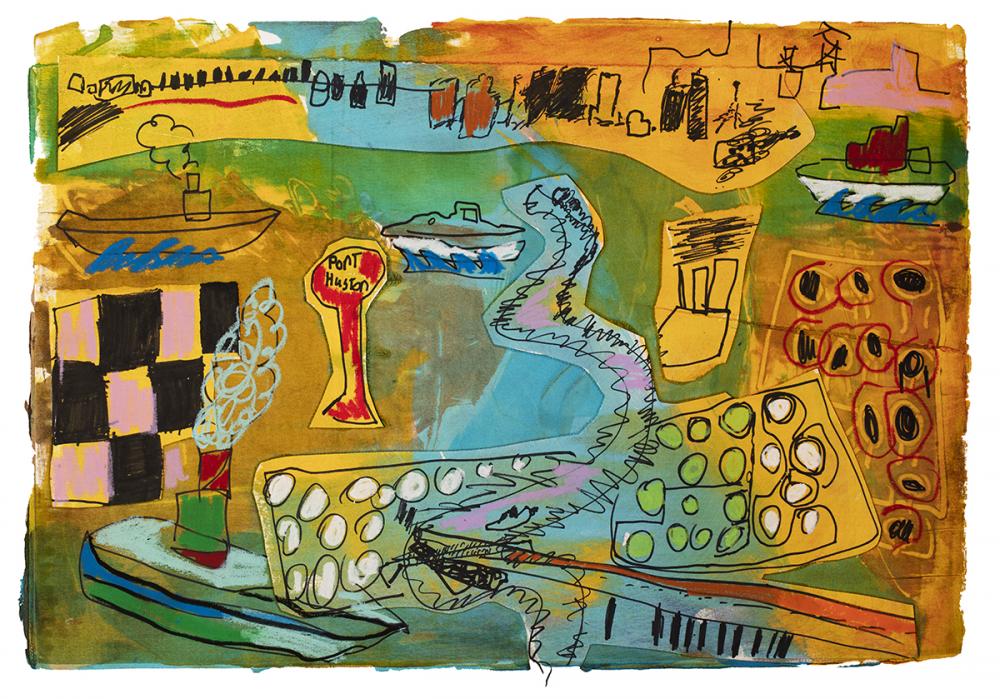 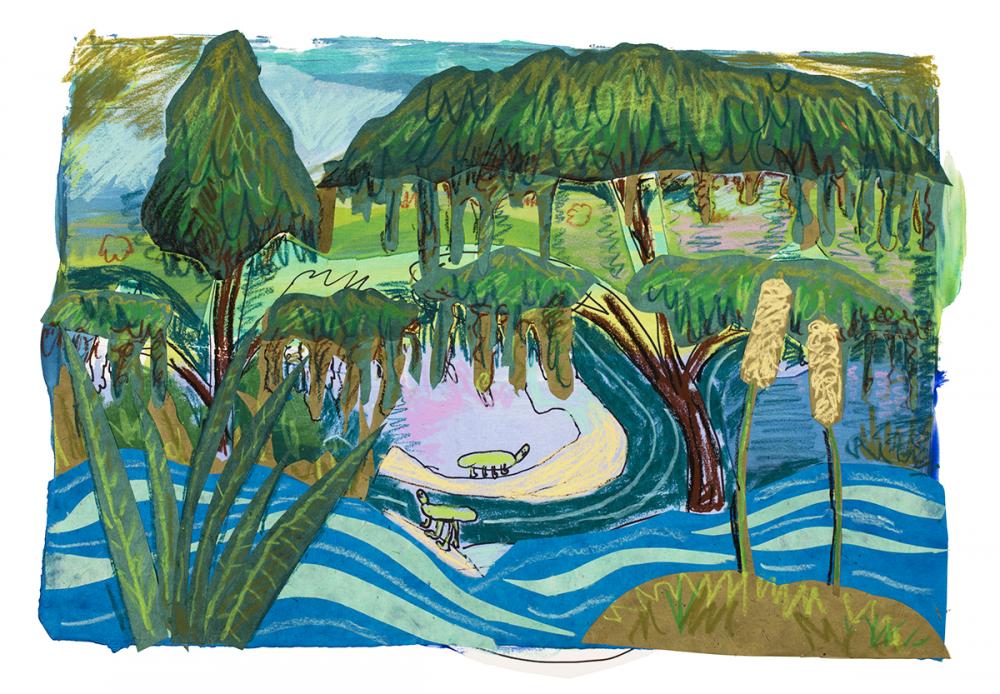 There’s a fascinating historical section to it. Because the show was delayed a year due to COVID, I had plenty of time to wonder what else we might do. It occurred to me to do some research and find historical art and photography about the bayou. I think many people will find this the most interesting part of the show.

There are photographs from 1895–96 by a marvelous photographer by the name of Henry Stark, who traveled throughout Texas. He came to Houston and photographed, so there are four of his beautiful photographs.

Wild. He photographed the bayou essentially in its natural state. It was Frederick Law Olmsted, the great landscape architect, who once said about Buffalo Bayou that “it is perhaps the most beautiful small stream I have seen in all the world.” Henry Stark's photographs show that. They're from a big view camera, and they're very finely detailed. They're not in color and therefore they're not very lush, but they’re beautiful in a stark way.

Then there’s a guy named Arthur Comey who was a disciple of Frederick Law Olmsted. The city of Houston invited him here in 1912 to do a master plan for city parks in Houston. And he photographed; he made fifty-six views of Texas with his big view camera. And we have four of his photographs of Buffalo Bayou in there.

We have photographs of an African American baptism, photographs of five or six boys swimming naked in a little swimming hole in the bayou. There’s a charming photograph from about 1920 of a family launching their yacht into the bayou. It's a beautiful, with women in their frilly dresses, and everybody there for the occasion to cruise the bayou. 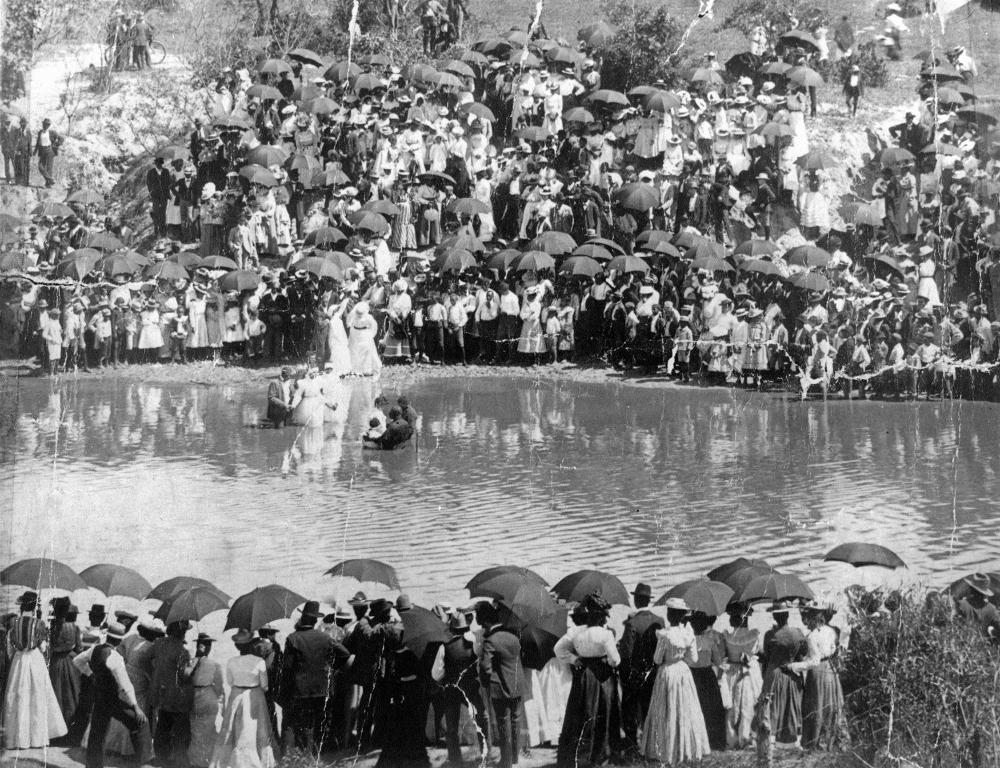 There are historical photographs, children's art and photography, my photographs, prints by artist Janice Freeman, beautiful photographs by George O. Jackson, and images by Jim Olive. There are 142 pictures. It’s a large show.

You've watched Buffalo Bayou for all these years. How do you feel about the ways that you've seen it change?

I think Buffalo Bayou Park is fantastic. The area from Sabine Street to Shepherd Drive has become a beautiful promenade along the bayou. On any nice day, you’ll find hundreds of people, biking, hiking, and picnicking. It’s wonderful. It comes with some loss: trees that were on the banks for all those years are mostly gone. While I believe in developing the bayou and the land along it for our pleasure and recreation, I think Save Buffalo Bayou, which is an organization devoted to preserving the bayou in its natural state as much as possible, is an important thing too.

I want to end with a couple of things that you and I would recommend related to Buffalo Bayou. One of the places that makes me really happy is the Johnny Steele Dog Park. My dog is so thrilled to be there. It’s his favorite place on the planet. What’s your favorite spot along Buffalo Bayou?

I think my favorite spot is under the freeways, under I-45 just west of downtown.

Yeah. I love the confluence of the city and the bayou there. Invariably, there'll be someone fishing or sleeping on the banks. It’s the coming together of my city, which I love. I love seeing the buildings and the skyline of the city from underneath. I remember being down there when afternoon, when this enormous ten-foot-long snake came swimming down Buffalo Bayou. I guess it was a water moccasin. It was this enormous snake, and it just swam right on by. You're still in the wild of nature right there next to the city.

This interview has been edited for length and clarity.