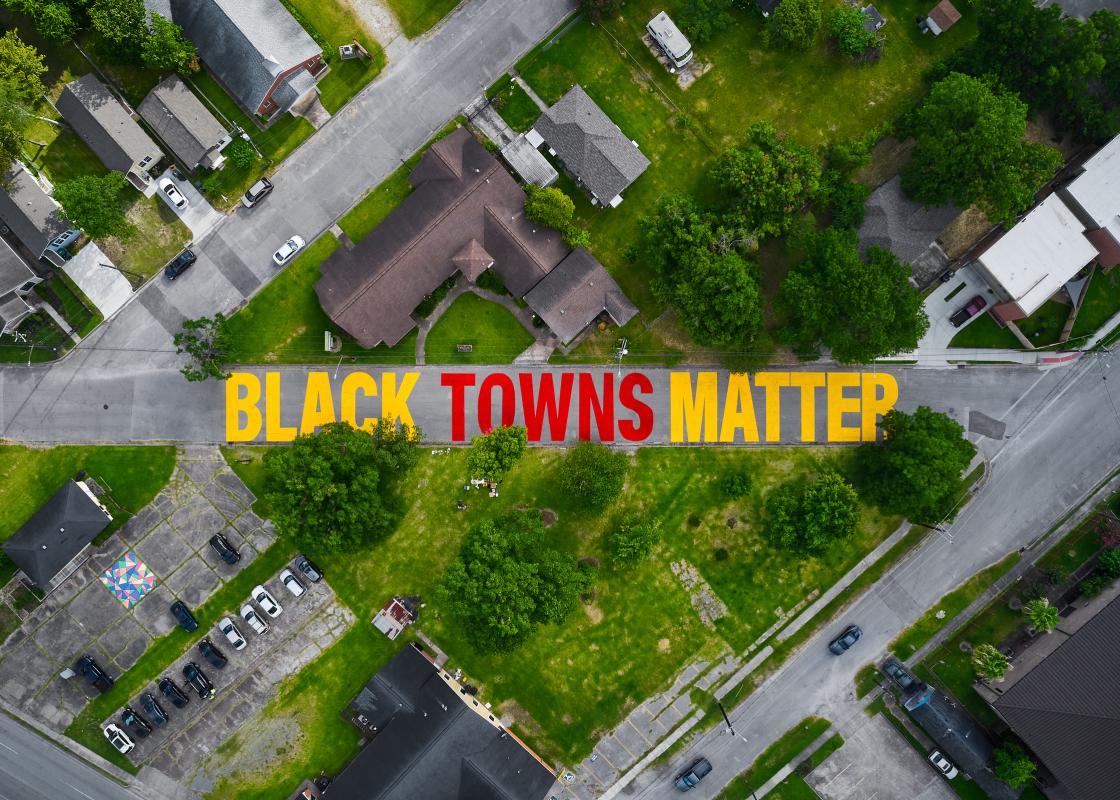 Many know Tanya Debose, the executive director of the Independence Heights Redevelopment Council, as the unofficial mayor of Independence Heights, the first incorporated Black city in Texas. Though she is a member of True Light Missionary Baptist, on Sunday you can find her in any one of the seven historic churches up and down the North Main corridor. Churches are the backbone of this community. After services conclude, their parking lots and driveways remain bountiful, as each serves a different piece of Sunday dinner. In these churches, and for these people, Black life, and the Black towns that contained it, have always mattered. But this June, in the wake of the nation coming to blows over the defense of Black life, Debose knew that she had to seize the moment. She organized a mural, emblazoned in red and yellow just off the Main Street Corridor down Link Road. It read: BLACK TOWNS MATTER.

“Three hours later we have a Zoom going,” Rogers said.

The mural was painted on the days leading up to Juneteenth, the holiday which commemorates the day in 1865 when enslaved people in Galveston were notified that they were officially emancipated. Alongside “BLACK TOWNS MATTER,” artists also created a portrait of the town’s first mayor, George O. Burgess. Though it began raining before the day’s end, the atmosphere was one of joy and collaboration, with numerous community members coming out to take photos and watch the artwork come together.

The motive was simple, Debose said: “People need to understand why we exist.” 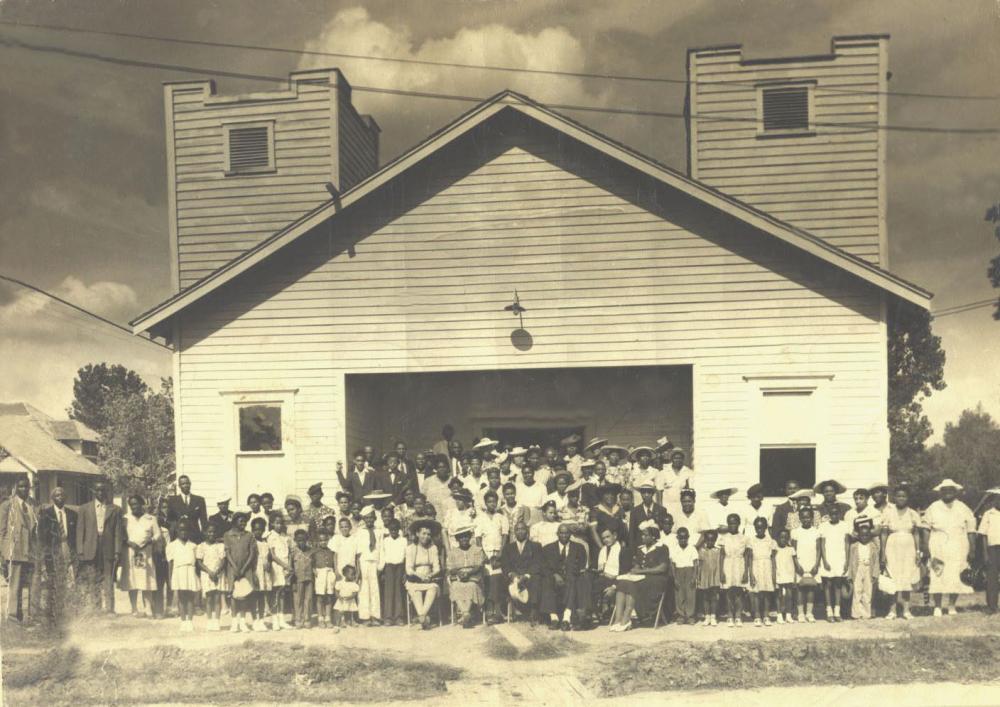 Around 1905, the Wright Land Company began divvying up parcels of land just north of downtown Houston, outside of the city limits, and attracting Black families from around the city with their reasonable prices and willingness to sell land to Black people. On January 25, 1915, the 600 residents of Independence Heights voted to officially incorporate, bounded on the south by 30th Avenue (now the 610 Loop), on the north by 40th Avenue, on the west by Yale Street, and on the east by Airline Drive. Debose’s grandfather was one of the first to buy land in Independence Heights. Two generations removed from slavery, he and his wife moved to Houston around 1910 and after saving some money, they bought a house on 30th Street.

The community thrived for a number of years; streets were paved, schools and churches opened, and residents cooperatively owned shares in a general store. But in 1928, residents voted to dissolve the incorporation and join the growing city of Houston.

Barely a decade later, Black land ownership in the area would come under threat. When designing the 610 Loop, planners from the Texas Transportation Commission (now part of TxDOT) planned right over the homes of a number of families living along the southern edge of Independence Heights. Debose’s grandfather was among the over 250 displaced.

Even today, that history of forced displacement continues in the form of yet another freeway—this time the proposed expansion of Interstate 45—and gentrification. Developers weaponize the city’s 311 services to report “neighborhood violations,” some as innocuous as uncut grass. These can result in burdensome fines, which can snowball into home loss. Gentrification in turn leads to increased and sometimes unsustainable property taxes. Debose notes that during the pandemic, appraisals must be contested using online conferencing softwares, which aren’t always accessible to elderly homeowners. 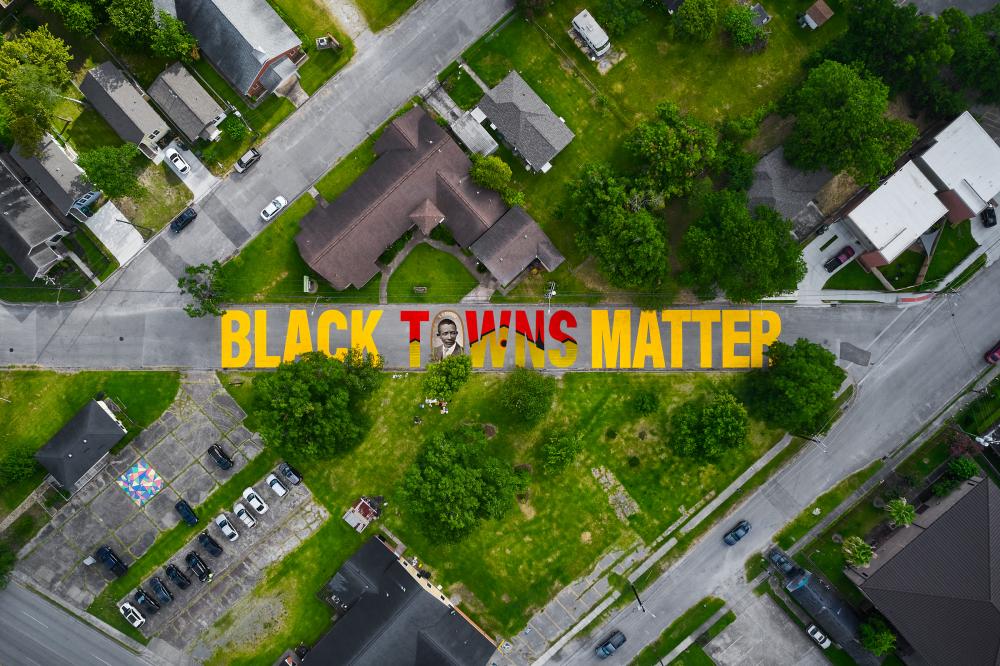 In typical Houston fashion, rain prevented the completion of the mural. This image shows the final image as designed. The central "O" was to include a portrait of George O. Burgess, the first mayor of Independence Heights. Image by Peter Molick.

Debose is fighting to maintain the community’s legacy of autonomy and self-governance. For her, preservation is key to the vitality of the community. When she began over a decade ago, that effort consisted of oral histories, taking photos, and organizing community events. Now, she says, she wants to organize the community to take up that work. But her mission has remained the same: to empower residents to fight for the preservation of their history.

“You’ve got to remember that these people are the children of the people who started their own city,” she said. “So self-governance was not something that was hard for them to see.”

For now, Debose is focused on creating historic districts in order to preserve homes and to continue to fight to access funds to repair homes from Hurricane Harvey. One repair at a time, one home at a time, the residents of Independence Heights contest the racism that initially created Black towns. Because Black towns have always mattered. And whether you’re a lifelong resident or a casual observer, Tanya Debose isn’t going to let you forget.

Irene Vázquez is a Houston-based journalist, editor, and poet. She is a senior at Yale, studying Ethnicity, Race, and Migration and English.