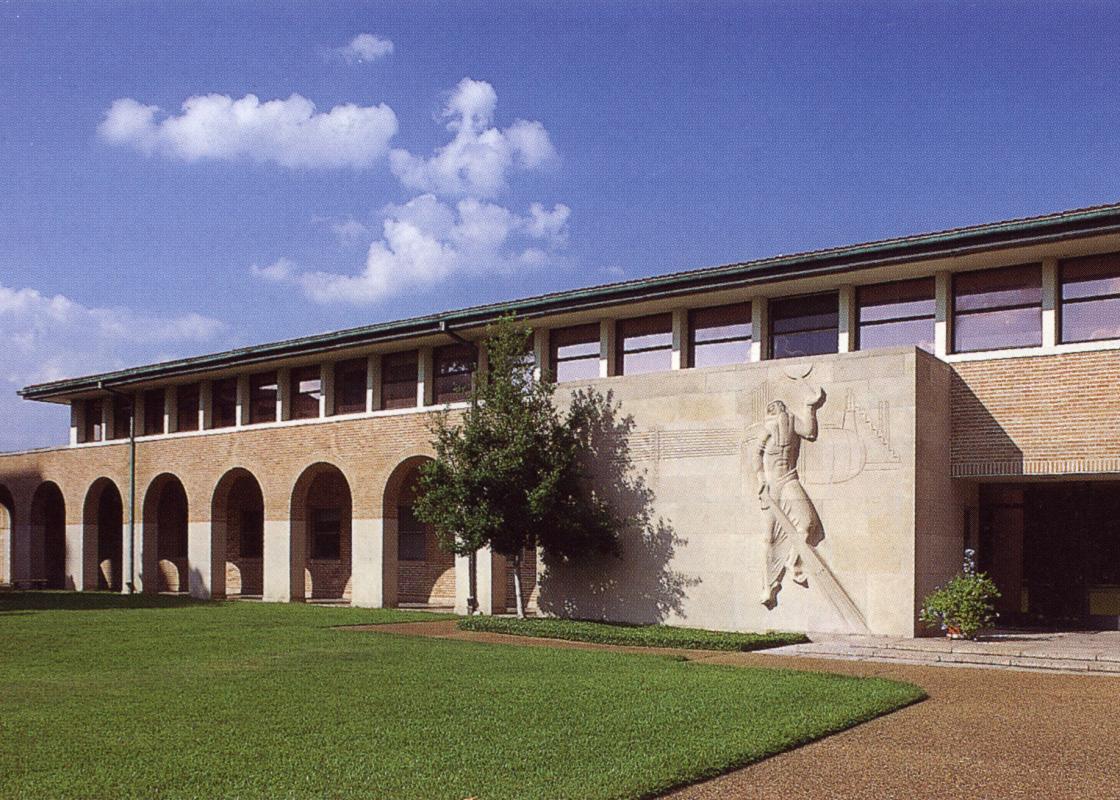 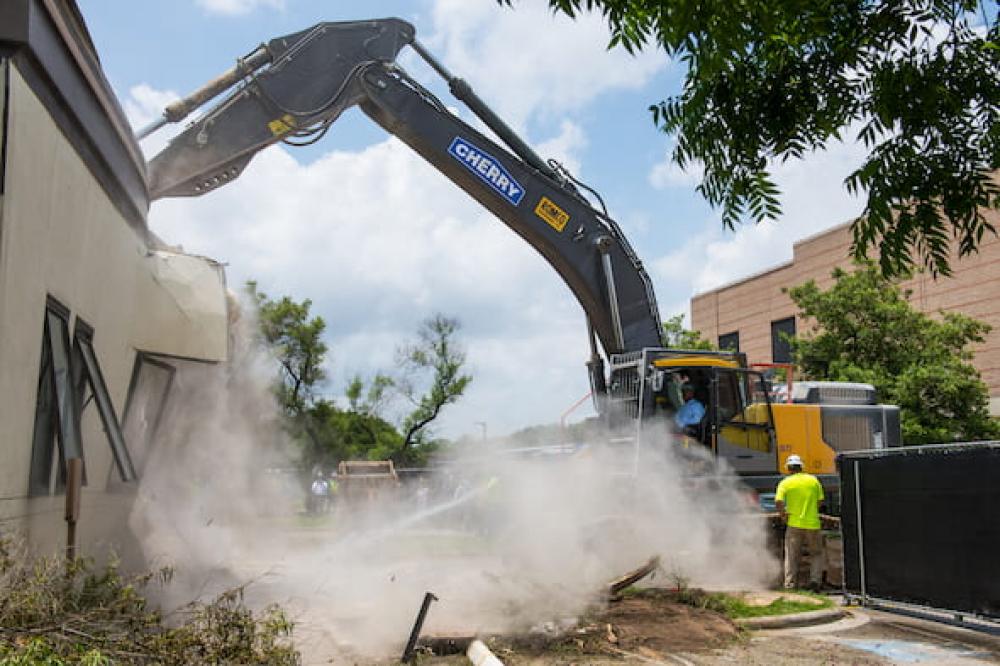 The start of demolition. Via Rice News.

Demolition of the seventy-three-year-old Abercrombie Engineering Laboratory on the campus of Rice University began on May 17, 2021, “with the first ceremonial bites taken out of the building’s north face by Rice President David Leebron, Provost Reginald DesRoches[,] and engineering professor Michael Wong,” a news release said. A new building designed by Skidmore, Owings, and Merrill (SOM) will be built in its place.

Dedicated in 1948, Abercrombie was designed by the architects Staub & Rather, with William Ward Watkin as consulting architect. The architects also designed Fondren Library and Rice Architecture’s Anderson Hall, which were finished around the same time in the late 1940s. The building cost just over $1 million at the time, with nearly half of the sum coming from J.S. and Lillie Frank Abercrombie. J.S. was a Houston oil drilling contractor and President of Cameron Iron Works. The gift honored the recent graduation of their daughter Josephine Abercrombie, who would go on to serve on Rice’s Board of Trustees and chair its Buildings and Grounds Design Subcommittee. 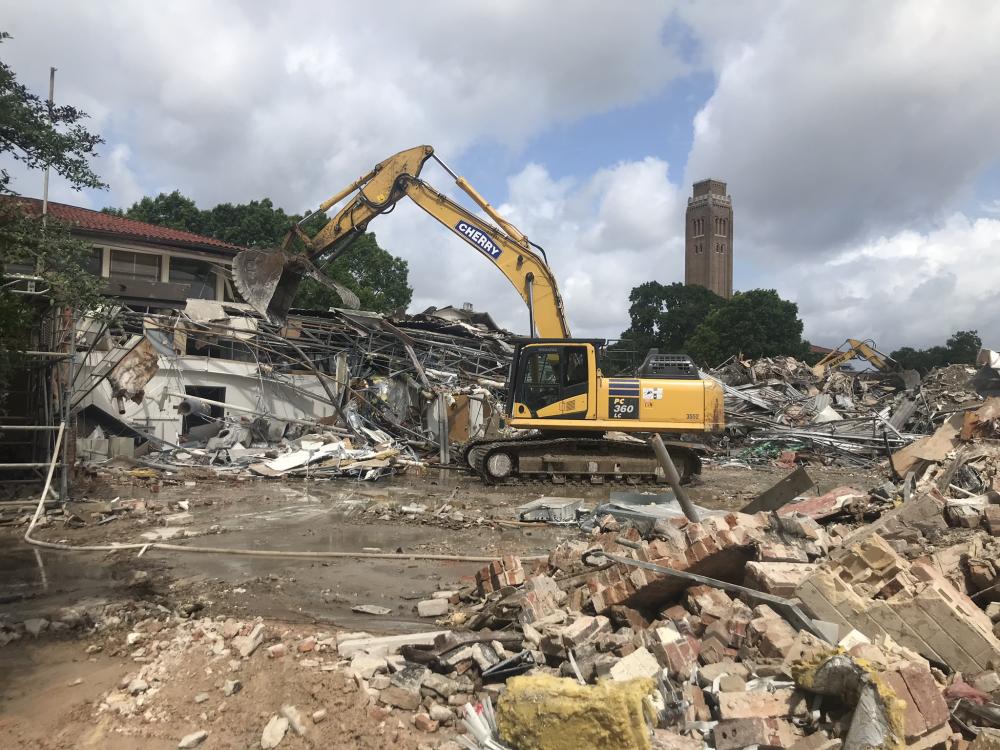 Clad in brick and granite, Abercrombie completed one side of the engineering quad. It was designed by architect J.T. Rather, Jr., who, according to Stephen Fox,

respected the architectural premises of the Mechanical Laboratory and Power House, which Abercrombie flanks. Yet he flattened and linearized the west-facing front of Abercrombie Lab, which has none of the layered depth and narrative subtlety of the Mechanical Lab. He streamlined and exaggerated the horizontality of the Mechanical Lab in Abercrombie’s long, flat front. Its unbroken file of square second-story windows and the equally insistent overhanging eave of the low-pitched hipped roof are as redolent of Frank Lloyd Wright’s Prairie houses of the 1900s and 1910s as of Cram’s Rice buildings. One senses that Rather, though a traditionalist, felt compelled to modernism. Frank Lloyd Wright was at the peak of his popularity in the postwar 1940s. It perhaps speaks to Rather’s sense of modernity that the Wrightian architecture he chose to emulate was the body of work Wright produced when Cram’s buildings at Rice were new, not the work Wright was doing after World War II. 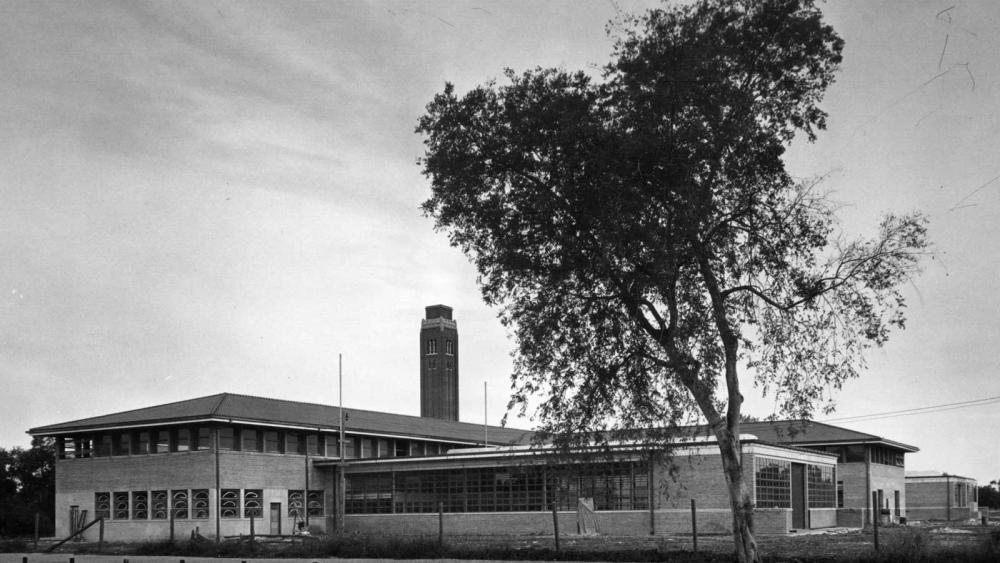 Via the George R. Brown School of Engineering.

Additional details about the building are available in Fox's architectural campus guide for Rice University, published in 2001 by Princeton Architectural Press.

Energy, a bas-relief sculpture by William McVey, a well-known artist alum of Rice, was included at the entry. “The one memory of Abercrombie that has never changed is the sculpture next to the entrance,” George Hirasaki, A.J. Hartsook Professor Emeritus of Chemical and Biomolecular Engineering, said in a remembrance assembled by the George R. Brown School of Engineering. “It appeared to be an Egyptian God extracting energy and materials from the sun and from the earth to make products useful for mankind. It symbolized to me that this is what engineering is all about.” The sculpture has been preserved and will be used in the new building. According to University Architect George Ristow, some brick was also salvaged for use in future work on campus. A time capsule found in the building's cornerstone; its contents were explored in a blog post by longtime Rice historian Melissa Kean.

Abercrombie was significant as the site of the R1, the Rice Computer, assembled between 1958 and 1961. It occupied a twenty-five square foot space at the south end of the second floor. It was the university’s primary computer until the mid-1960s. The R1 was dismantled in 1971. The building also housed the laboratory of William Akers, who was “instrumental in developing the first artificial heart.”

In 1981, the courtyard between the rear wings was filled in with new construction by MRW Architects. 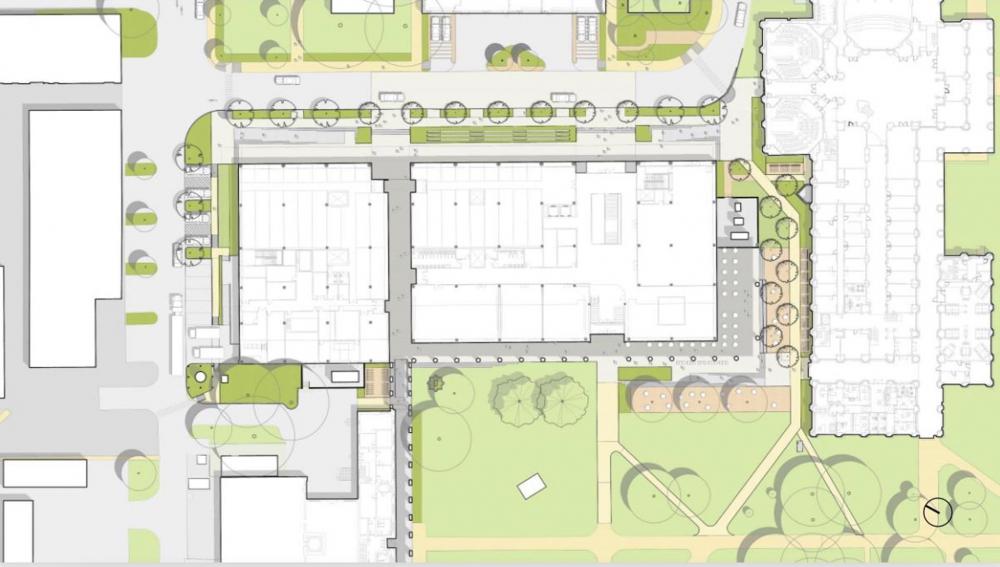 An early site plan shows how a new science and engineering building will be situated in the space currently occupied by the Abercrombie Engineering Laboratory. Courtesy of SOM. Via Rice News.

COVID-19 brought the final challenge for the building, as Abercrombie was one of the primary staging sites for testing facilities on campus. Many in Rice’s community entered through a door on the north side of the building to be swabbed.

The new building will be a 266,000-square-foot engineering and science center spread over four floors and a basement. It will better support work in nanotechnology, materials science, chemistry, electrical and computer engineering, chemical and biomolecular engineering and physics. Among other roles, it will serve as the headquarters for The Welch Institute for Advanced Materials, founded last year with a $100 million gift by the Robert A. Welch Foundation, the largest single donation in Rice’s history.

This new facility has been designed by SOM, with local office Scientia Architects consulting on laboratory design. The effort is led by SOM’s Senior Consulting Design Partner Craig Hartman, who previously completed the Bioscience Research Collaborative for Rice University and the Texas Medical Center in 2009. Construction on the to-be-named building is expected to begin this summer. 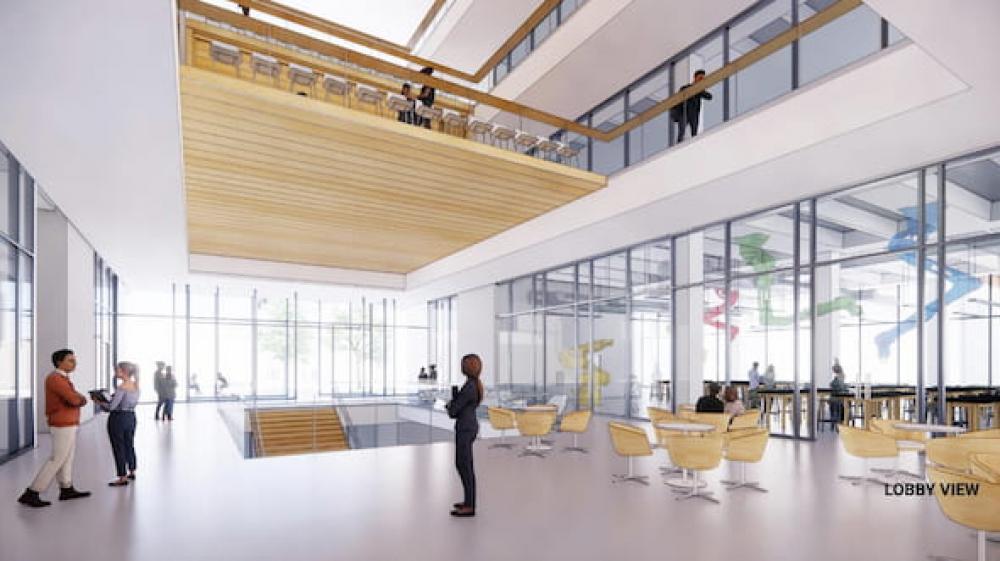 A preliminary rendering shows a concept for the lobby of the new science and engineering building on the site of the Abercrombie Engineering Laboratory, which will be demolished soon. Courtesy of SOM. Via Rice News.

Even though the new building is under construction, no image of its exterior has been shared. To date, only two images of the new building have been made public. A site plan shows the building occupying a similar footprint to Abercrombie, with a pathway that extends the arcade of the Mechanical Laboratory and Power House through the interior. Some form of arcade will also line the front of the new building. An outdoor space is planned for its interior corner, and the streetscape on the east side seems improved from its current state. A preliminary rendering shows a multi-height interior space. Large glazed walls offer transparency; a set of robotic arms appear in the background lab space.

Update: an image of the building as seen from the Engineering Quad can be seen on a dedicated website about the new research center.

Collaboration is a key word for the new facility, which will help Rice recruit the best faculty. “The research planned for the building will keep Rice faculty and students at the forefront of areas that will have tremendous impact over the next several decades, such as advanced materials for energy transition and quantum computing, sensing[,] and materials,” said Thomas Killian, Dean of the Wiess School of Natural Sciences.

Rice's campus will support additional construction sites this year. Construction will likely begin soon on the new wing of Hanszen College (designed by Barkow Leibinger with Kirksey and to be realized in southern yellow pine cross-laminated timber) and a new building for the Visual and Dramatic Arts that will replace the Rice Media Center (designed by Diller Scofidio + Renfro). Out with the old and in with the new!