In March 2018, Houston hosted the Funders’ Network Annual Conference to explore strategies for and stories behind creating more equitable, sustainable, and resilient communities. Rice Design Alliance created five tours in collaboration with the Funders’ Network for people interested in getting a first-hand look at Houston’s vibrant neighborhoods and unique approaches to tackling complex challenges.

A trip up the the 13-mile, north-south METROrail Red Line to the Near Northside is a great way to understand the dynamism of Houston and efforts to manage change. In a city known for its orientation to the private automobile, billions of dollars have been invested in parks, housing, arts, and commercial development along rail. On the Red Line ride, you can see a glowing new campus at the Museum of Fine Arts, Houston; an innovative shared theater and exhibition space in Midtown; and luxury high-rise apartments in Downtown. Once the train crosses Buffalo Bayou and I-10 into the Near Northside, the character of the architecture and the streets changes. The Near Northside has long been an affordable area and a gateway for immigrants, and, as the Houston Chronicle reported, residents both welcome new investment and fear a loss of culture, history, and community.

When plans for the extension of METROrail to the Northside were made public, funders, nonprofits, and community leaders made a concerted effort to plan ahead for the changes the light rail investment were expected to bring. In 2009, the Houston Local Initiatives Support Corporation (LISC) worked with Avenue CDC to launch GO Neighborhoods. The initiative led to a Quality of Life Agreement, produced with expertise from the Community Design Resource Center at the University of Houston, that guided a series of funder-supported and community-led projects including new parks and community centers, repaired homes, facade improvements to commercial buildings, minimum lot size restrictions, affordable multi-family housing, festivals, and public art. In October 2017, Avenue CDC sponsored a group of Near Northside residents to attend a NeighborWorks community leadership institute where they conceived of a "tactical urbanism" plan and wrote a successful application for a small grant. 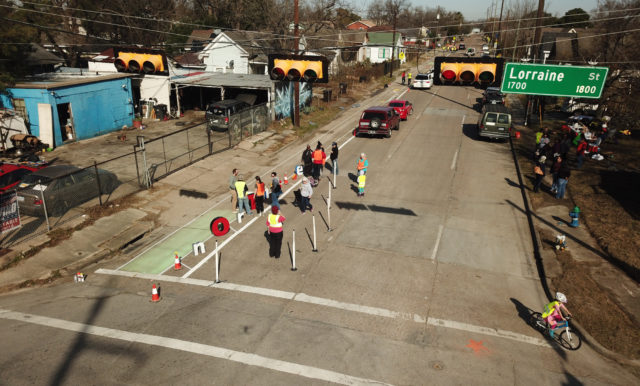 On the morning of Martin Luther King Jr. Day 2018, the Houston Department of Transformation led 35 volunteers in picking up trash and creating a temporary bicycle lane with tape and chalk along Elysian between Hogan and Lorraine streets with the hope of spurring the city and county to make the change permanent. That stretch of road was the site of a crash in which a Dunbar armored van driver killed a child named Angel Vazquez. In August of this year, the group continued their series of tactical interventions at Hardy and Harrington.

In an interview with Rice University's Kinder Institute, Shirley Ronquillo explained the goals of this tactical urbanism project: "We wanted an immediate success, a small project we could undertake understanding we all had other responsibilities. We could focus on street intersections, the pedestrian safety and bike safety, [and] in doing so we would hopefully help reduce the speed in certain areas."

The cumulative effect of all GO Neighborhood’s parallel efforts is impressive. The transformation of the neighborhood appears to be in line with the hopes and dreams of longtime residents. The tour below ends with a walk around the Near Northside where you can appreciate these efforts in person.

A Trip Up the Red Line (Near Northside) Tour: Points of Interest 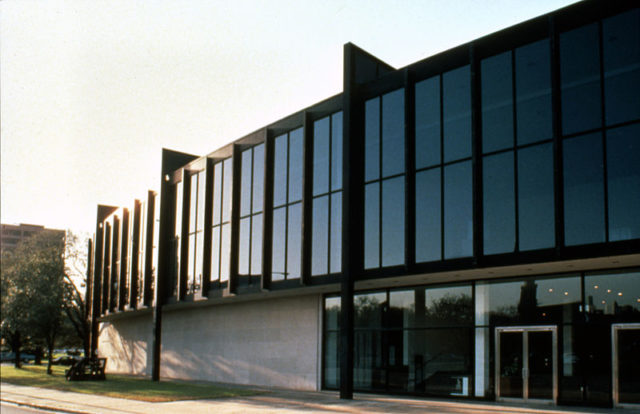 The Caroline Wiess Law Building at the Museum of Fine Arts Houston was designed by Mies van der Rohe. The latest addition to the MFAH campus, the Glassell School of Art building and the Brown Foundation, Inc. Plaza, opened to the public May 20, 2018. Photo: Wikimedia Commons

1. Museum of Fine Arts, Houston, 1001 Bissonnet Street
A short walk from the Museum District Stop of the METROrail red line will give you a sense of the dramatic changes underway at the Museum of Fine Arts, Houston that were master planned and designed by Steven Holl Architects. The recently completed Glassell School of Art building sits atop an underground parking garage, allowing the L-shaped building to shape a plaza at street level. A sloping roof leads up to a public rooftop. Construction of the translucent and transparent Nancy and Rich Kinder Building is underway directly across from the Brown Pavilion designed by Mies van der Rohe and catty corner from the Audrey Jones Beck Building designed by Rafael Moneo.

2. Sears Roebuck & Company, 4201 South Main Street
The flagship Sears in Houston, a 1939 deco building designed by Nimmons, Carr & Wright and later covered with metal siding, closed in 2017. The building is owned by Rice Management Company, which is converting it into the anchor of a new innovation district. The site is adjacent to the Red Line’s Wheeler Avenue Stop, and a highway that will be rebuilt below ground. The current highway underpass has been the site of a homeless encampment beset by crime and violence. The three parcels may be redeveloped in a coordinated manner to address several challenges at once, including the city’s need for equitable transit-oriented development. 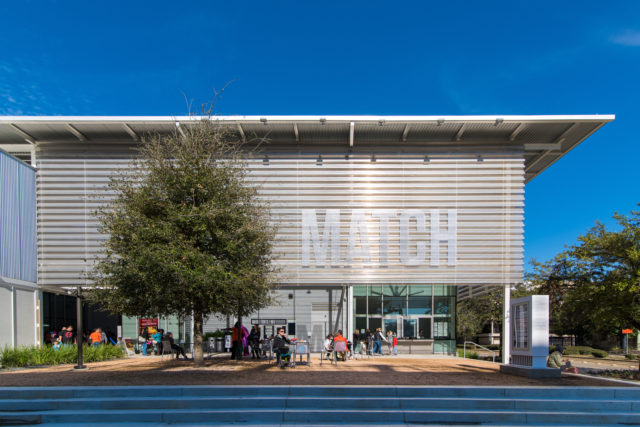 3. Midtown Arts and Theater Center Houston (MATCH), 3400 South Main Street
This 2015 building designed by Lake|Flato and Studio RED organizes several theaters and an exhibition space around a central breezeway, which encourages interaction between different audiences and artists. With initial funding from Houston Endowment, this project resulted from years of planning by several small- and medium-sized arts organizations looking to share resources and enable growth. The spaces are rented at affordable rates.

4. Downtown Living Initiative Housing, 1725 S Main St, Houston
As the tour passes through Downtown Houston, notice the recent boom in housing construction along the rail line. Developers were given up to $15,000 in tax rebates per-unit for homes and multifamily projects within the Downtown District, with no requirements for including a set percentage affordable or workforce units. The 5,000 unit cap for this program was reached relatively quickly as developers built luxury highrises, including the SkyHouse and Block 334 buildings that can be seen from the train. 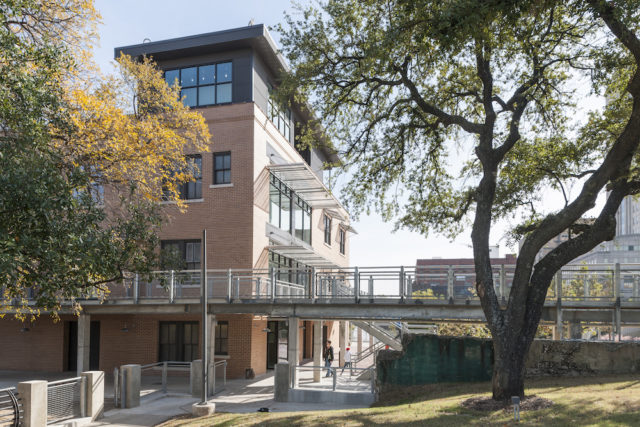 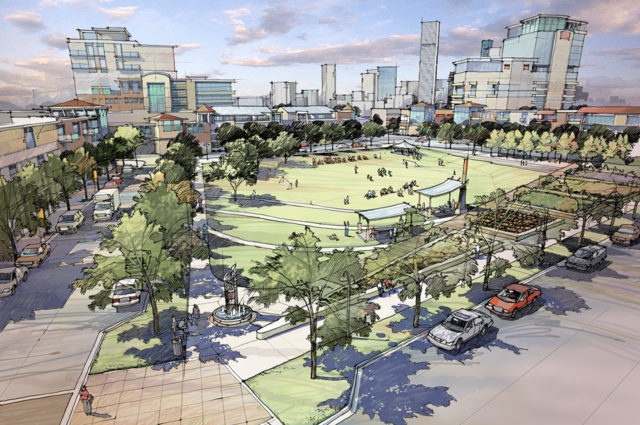 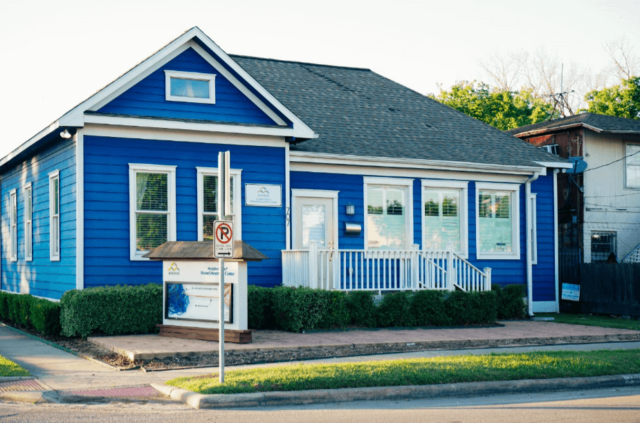 5. Sunset Coffee Building, 1019 Commerce Street
Between the Preston and University of Houston Downtown stop, you will see the most intact historic district of Downtown. Harvey floodwaters damaged some buildings, whereas other buildings demonstrated resilience, including the early 1900s Sunset Coffee Building, rehabilitated with public and private funds in 2017 (Lake|Flato and BNIM) along Buffalo Bayou at Allen’s Landing where Houston was founded. As the rail line passes University of Houston Downtown, Buffalo Bayou, and freight rail tracks, you will have an elevated panoramic view of Houston.

6. Hardy Yards, 901-999 Burnett Street
The Southern Pacific Railway’s Hardy Yards operated from 1887 to the early 2000s. A new mixed-use, mixed-income, high-density development (Steinberg Design Collaborative) is under construction at this site adjacent to a transit center and the Casa de Amigos Stop of the red line of METROrail. A neighborhood of Czechs, Germans, Syrians, and other immigrants grew around the rail yards and warehouses. The area later came to be known as the Near Northside and now has a predominantly Latino population.

7. Avenue CDC Homeownership Center, 707 Quitman Street
This house, painted bright blue, is a nice match for the aspirations of Avenue CDC’s clients. The organization helps clients of different income levels navigate the complexities of buying a home. It is also a nonprofit developer that leverages various types of financing, such as Low-Income Housing Tax Credits, to build multi-family apartments and single-family houses with a mix of affordable, workforce, and market-rate housing. In addition, Avenue CDC serves as the sponsor of the GO Neighborhoods program. Those groups, along with Open Architecture Houston and Greater Northside Management District, have helped many building owners and business owners liven up facades. For example, across the street at 2315 North Main, you may notice a beautiful mural by Rice Architecture students Drew Heller and Evio Isaac with bars in various shades of blue and pink. That project was led by Natalie Campos Goodman and Adelle Main of Open Architecture Houston, a global network of local grassroots chapters delivering design advocacy and services. Although the building was not structurally sound, the green space behind the building was designed to host outdoor community events and exhibit the murals. 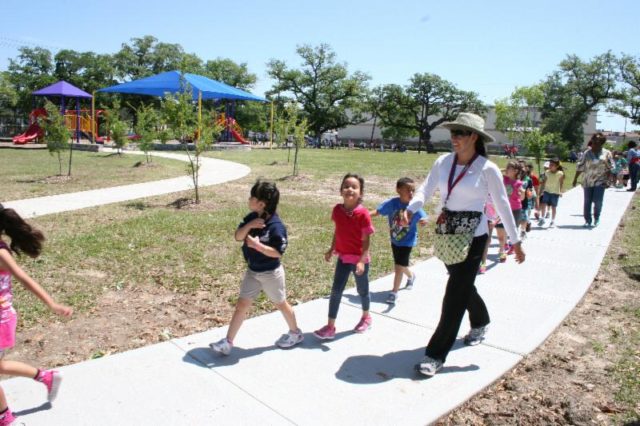 9. Ketelson Elementary SPARK Park, 600 Quitman Street
Once considered a drug haven for the homeless, this site was rebuilt in 2012 as a park for the adjacent elementary during school hours, and it is open to the public during the daylight hours when school is out of session. This project was one of the first priorities identified by the GO Neighborhoods listening campaign and Quality of Life Agreement. The local SPARK Park program has worked with schools and neighborhoods to develop community parks on public school grounds for over 30 years. Now these small parks are being paired with big data. With funding from Houston Endowment, the Trust for Public Land piloted a tool that identifies where new park acquisition would have the greatest impact on park deserts. With funds from Houston Endowment, the Kinder Foundation, the Powell Foundation, and the City of Houston, the SPARK School Parks program will build 25 new SPARK parks over the next three years in identified park deserts. 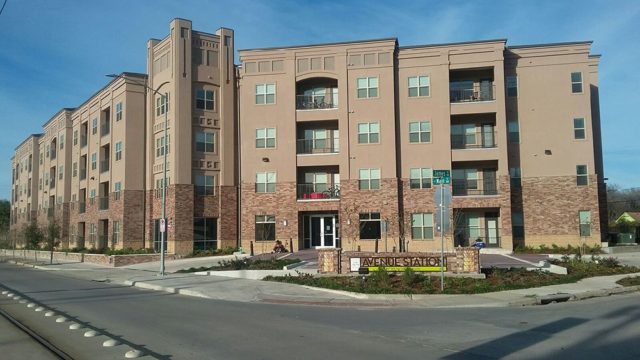 10. Avenue Station, 2010 N. Main Street
This 68-unit apartment building developed by Avenue CDC, and designed by Insite Architecture, opened in 2016. It is another example of equitable-Transit Oriented Development that received Hurricane Ike disaster recovery money. Given the scale of flooding in the last three years, the disaster recovery funds expected to be available, and Mayor Sylvester Turner’s aspirations for “Complete Communities,” it seems possible that Houston is at a new turning point. The city may now finally have the funding and vision to address housing and transportation costs, redevelopment, and gentrification in a comprehensive manner.

The tactical urbanism project described at the start of this article took place less than a mile to the east of this site at Elysian and Lorraine streets.