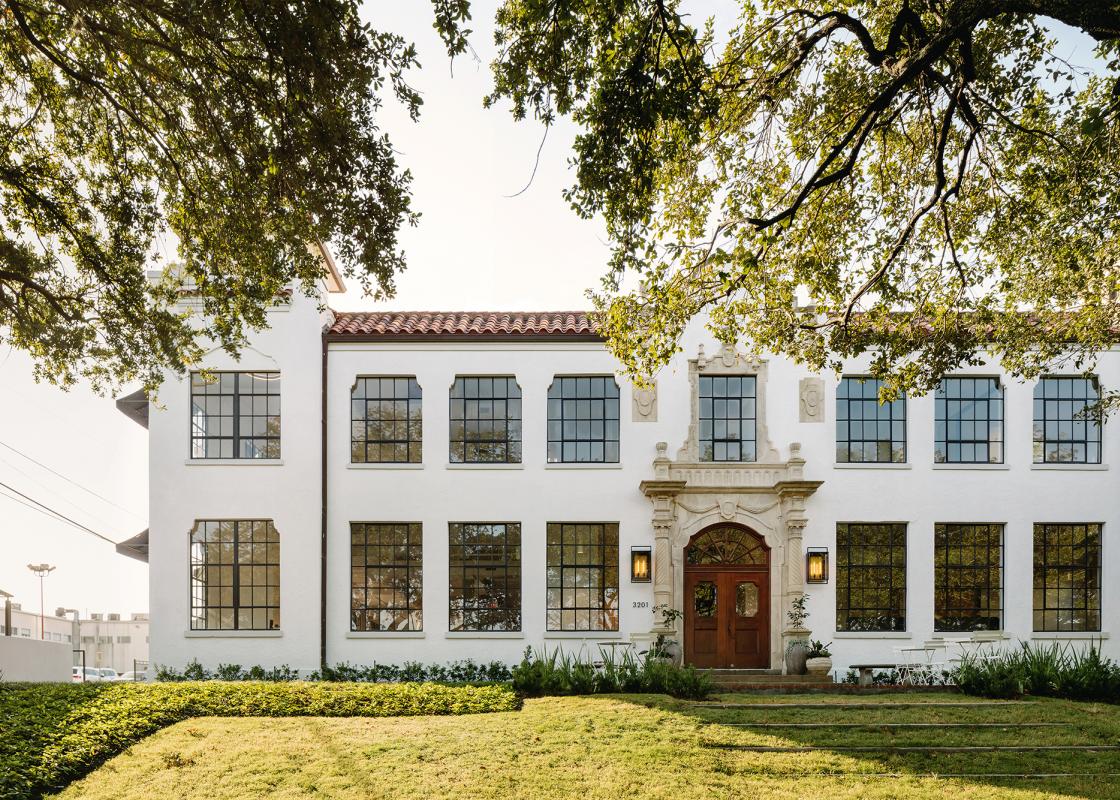 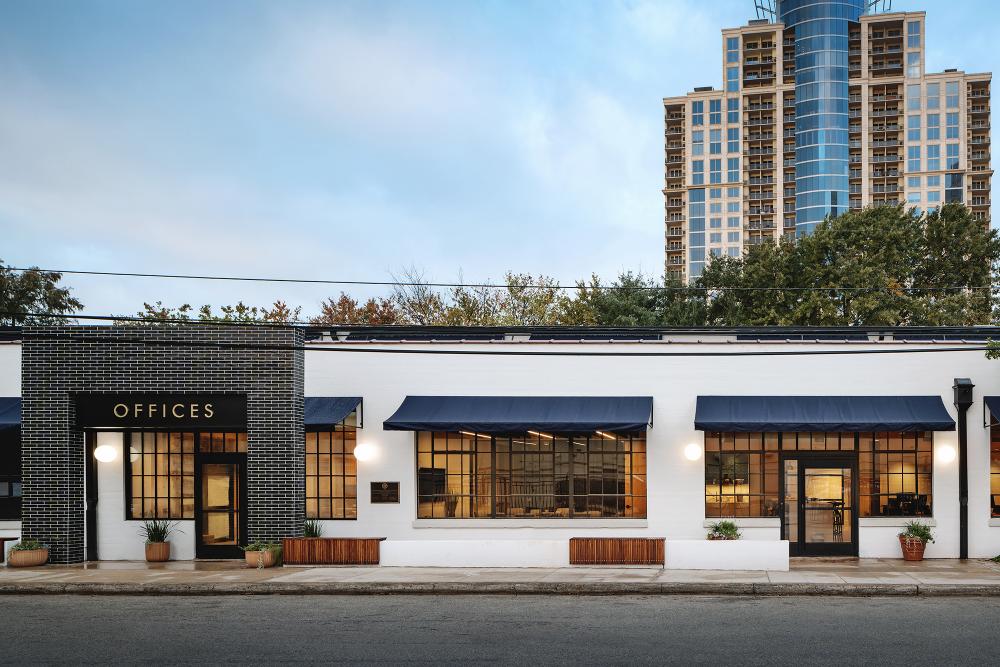 You enter 3201 Allen on Rosine Street beneath a brick portal flanked on either side by stucco walls punctuated by steel windows and cobalt blue awnings. It looks almost contemporary. Inside, doorways and staircase framed with wood bring warmth to the white walls and polished concrete floors. Certain elements convey the sense that everything could be new, but appearances are not always what they seem. Concrete columns appear throughout the lobby, breaking the seemingly perfect veneer of the walls with their uneven edges and coloring. Turning the corner by the stairs, the consistent gray of the floors gives way to a patchwork of reddish and sandy tones, the result of oxidation. At the end of a hallway, aligned with the monumental staircase, two worn concrete columns interrupt the space, as if they had been uncovered during construction and were accommodated as archaeological finds. If arriving from Allen Parkway, you ascend subtle steps integrated into the lawn before passing through the building’s the Spanish Colonial Revival façade. Its intricate stonework gives an indication of the project’s real age, albeit with clear updates made in the form of pristine stucco and stones unmarred by time. 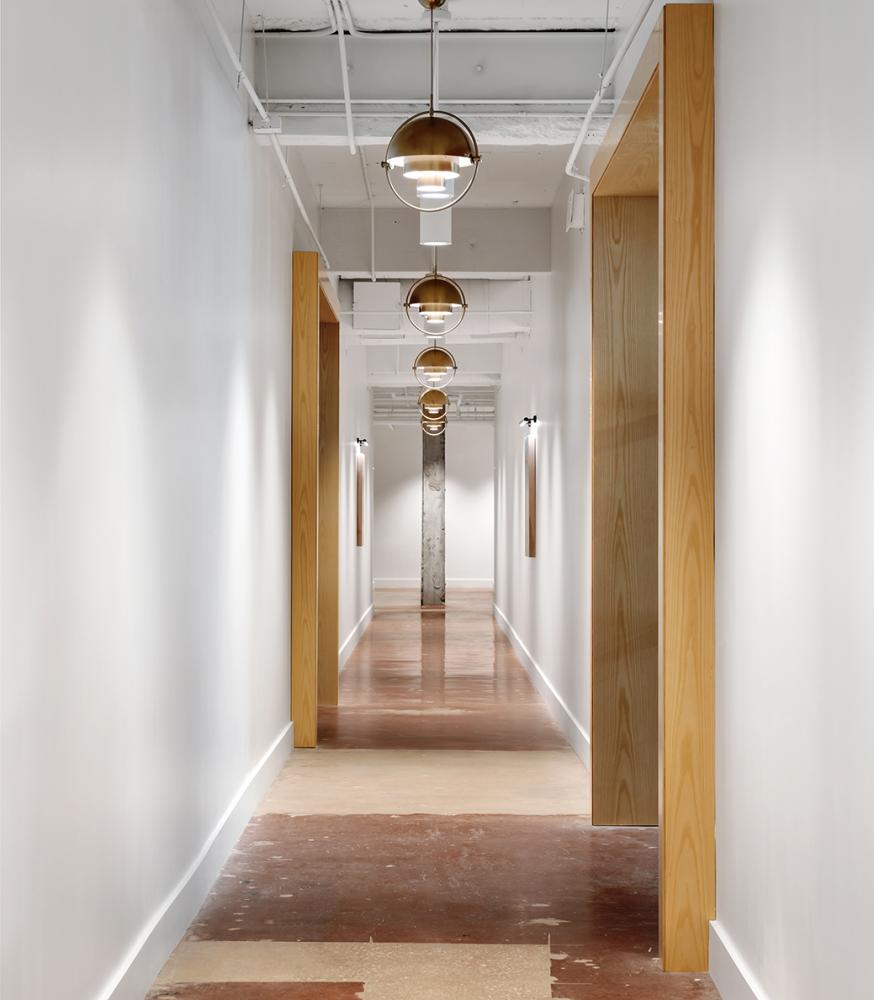 It’s quickly evident that several eras and architectural styles factor into the design of 3201 Allen, a project led by developer Radom Capital with a design team that includes architect Perkins&Will, interior designer Perrin Projects, landscape architect SWA Group, and preservation consultant MacRostie Historic Advisors. Here, it’s intentional that element’s age isn’t always obvious in relation to others. Through a skillful blend of timeliness and timelessness, the team delivered a project that updated a landmark into a present-day destination.

The building was originally built for the Star Engraving Company in 1930 as a facility to make class rings and leather-bound portfolios. Years later, the building was occupied by Stages Repertory Theater and the Children’s Museum of Houston prior to its 1992 move to a new location designed by Venturi Scott Brown Architects. To save the building from demolition in the 1990s, Stages and their supporters lobbied local government to intervene, and the City of Houston eventually purchased the property for its continued use as an arts center. Radom Capital acquired the property in 2017, but Stages remained in the space until 2019, as their agreement allowed them to stay for two years until a new theater across the street was completed.

Today, 3201 Allen is intended to be a space for interaction, favored for its proximity to Buffalo Bayou Park and the neighborhoods it connects. For Radom Capital’s Managing Principal Steve Radom, it was important that the new elements were balanced with the building’s fundamental qualities. “Our role was to not come in and make major alterations,” he says. “It was to really dig into what was the original beauty and what was lacking with the existing condition. How do we, within budget and within the context of what we were trying to accomplish for future tenants, make it more current, functional, and usable?” 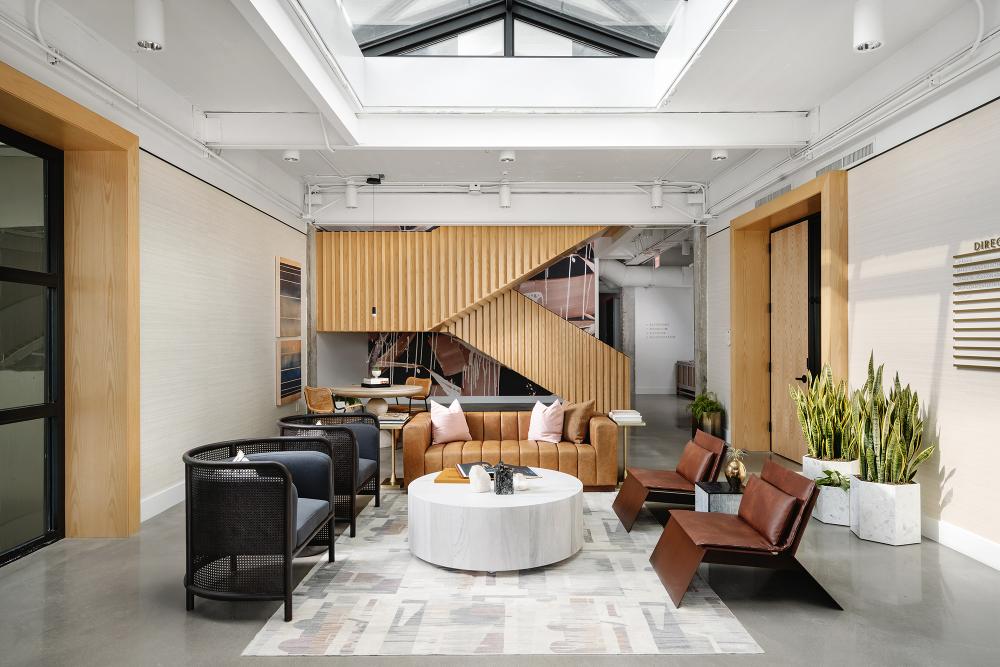 The answer shows the possibility of adapting buildings for new times, rather than discarding them when one owner moves out. Only a small number of older buildings remain in Houston—Harris County puts the number of structures built pre-1945 at around 6% of the overall building stock. 3201 Allen has been restored to preserve a piece of this history. The Houston office of MacRostie Historic Advisors coordinated the process of receiving state and federal approvals to ensure its redevelopment met the Secretary of the Interior’s standards of appropriateness for historic tax credits. “The primary challenge for this building was determining the original interior configuration and finishes, which were lost or hidden by the changes made over time,” says Anna Mod of MacRostie Historic Advisors. “Historic photographs and architectural drawings were tremendously helpful in this regard.”

The goal was to make choices that honored the original design rather than creating a false sense of history. Consider the east façade along Rosine Street. The brick proscenium is flanked by low, chunky CMU retaining walls; both elements are the result of a postmodern renovation in the 1990s. The new design covered these walls with stucco to reference the Spanish Colonial Revival façade, which simultaneously accounts for the building’s original style and accommodates what has added later. 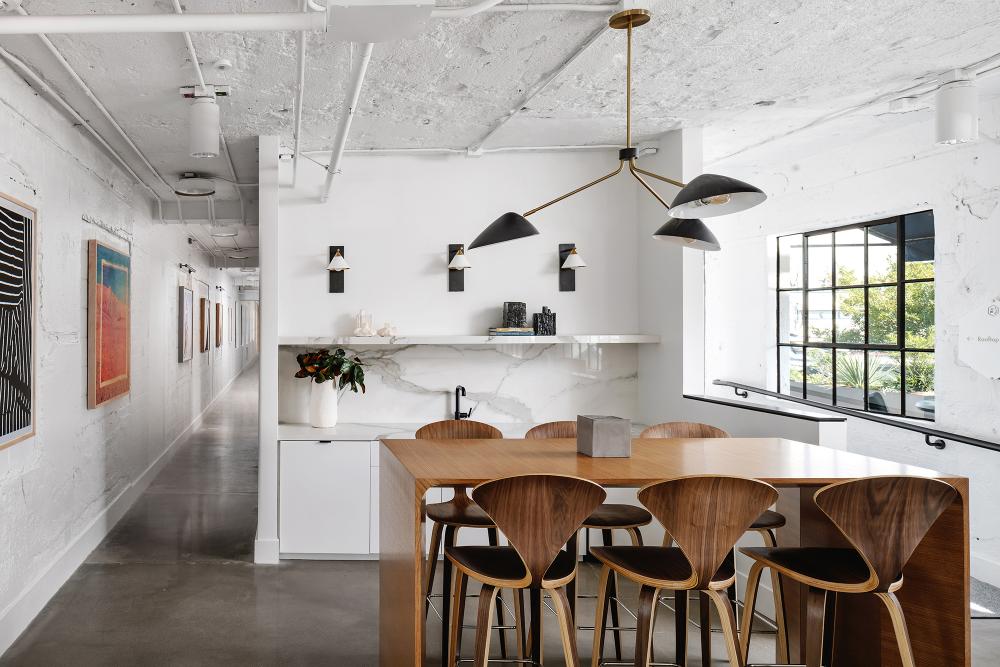 Inside the lobby, a 10’ × 15’ glass skylight installed by Houston-based steel fabricator Cerdafied pours light into the space, which is furnished like an upscale living room, with slick midcentury modern-inspired furniture that brings a polished sensibility. Blendin Coffee Club is next door, while offices for a tech company are around the corner. The stair sports terrazzo treads, an unexpected detail that ties the building’s different eras together. Upstairs, there are spaces for several design companies, along with administrative offices for the University of Texas. The wall along these offices is emblematic of the care that went into the design decisions for the project. What was once an exterior wall with windows has been infilled, leaving square recesses behind. Rather than covering these with a new wall finish, artworks are installed in the nooks, highlighting the inherited conditions of the building.

The building’s frontal Spanish Colonial Revival elevation is balanced by the long, reserved warehouse façade. Both facades are characterized by steel windows; these are accented by stonework along Allen Parkway but become simple punctures in the wall in the formerly industrial section and finally gain new exaggerated metal frames on the south façade facing D’Amico Street, where the building has fewer historic restrictions. Beyond Blendin, this area will soon host an art gallery, wine bar, and restaurant, offering retail experiences from day to night. 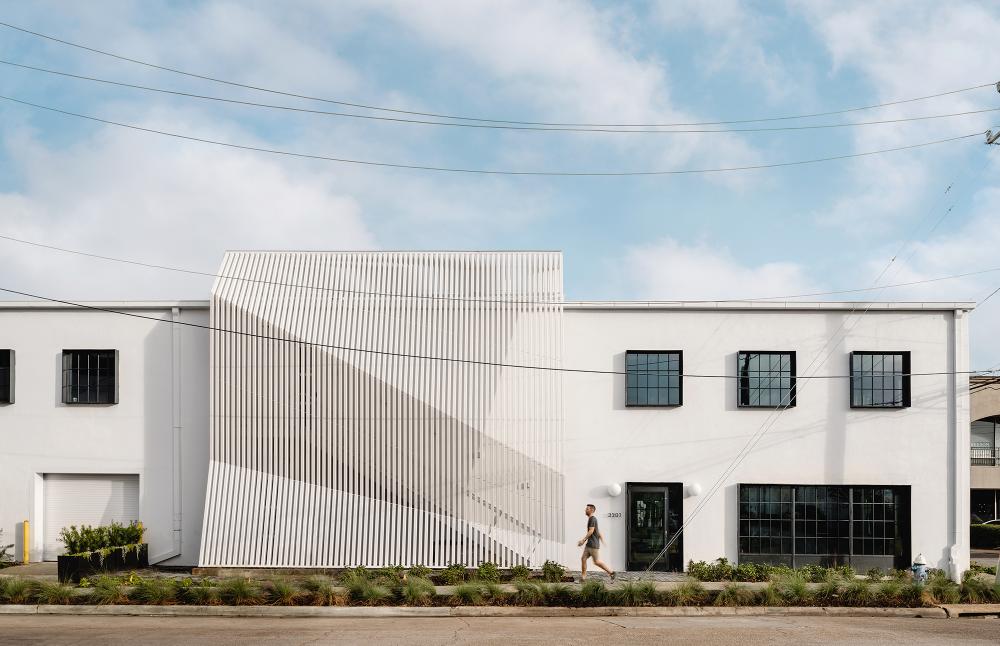 A dramatic curtain-like metal enclosure drapes the exterior stair on the D’Amico façade, creating a moment of visual excitement that references the new Stages across the street. Another aspect of coordination between the two projects lies in their parking arrangement: given the staggered hours of theatergoers and the office and retail users of the two projects, the new theater includes a parking garage that has been partially leased for the use of 3201 Allen.

The finishing touches for the complex include the flagstone courtyard and patios around the property, outfitted with cafe tables and chairs that can be easily rearranged to suit visitors’ needs. The overall effect adds a degree of porosity to the ground floor, with the hopes of one day creating a vibrant street environment. “The scale of what you do shouldn’t be exaggerated,” Radom remarks. “But it also shouldn’t be compromised. You shouldn’t say, ‘This patio doesn’t matter because it’s on a side street.’ You should actually say, ‘This patio matters because it gives Houstonians another place to be outside.’”

It takes extra commitment to design and execute an adaptive reuse project with sensitivity, but the benefit of such work is a renewed investment in Houston’s architectural heritage. It shows at 3201 Allen, which was recently awarded a 2022 Good Brick Award from Preservation Houston. Built from the city’s past, the project stands as a commitment to the city’s future. More developers should follow the example of Radom Capital and their team at 3201 Allen.

Lindsey Chambers is currently a Master of Architecture candidate at Rice University, and she holds a Bachelor of Arts in Architecture from the University of Pennsylvania. Her work has also appeared in PLAT Journal.