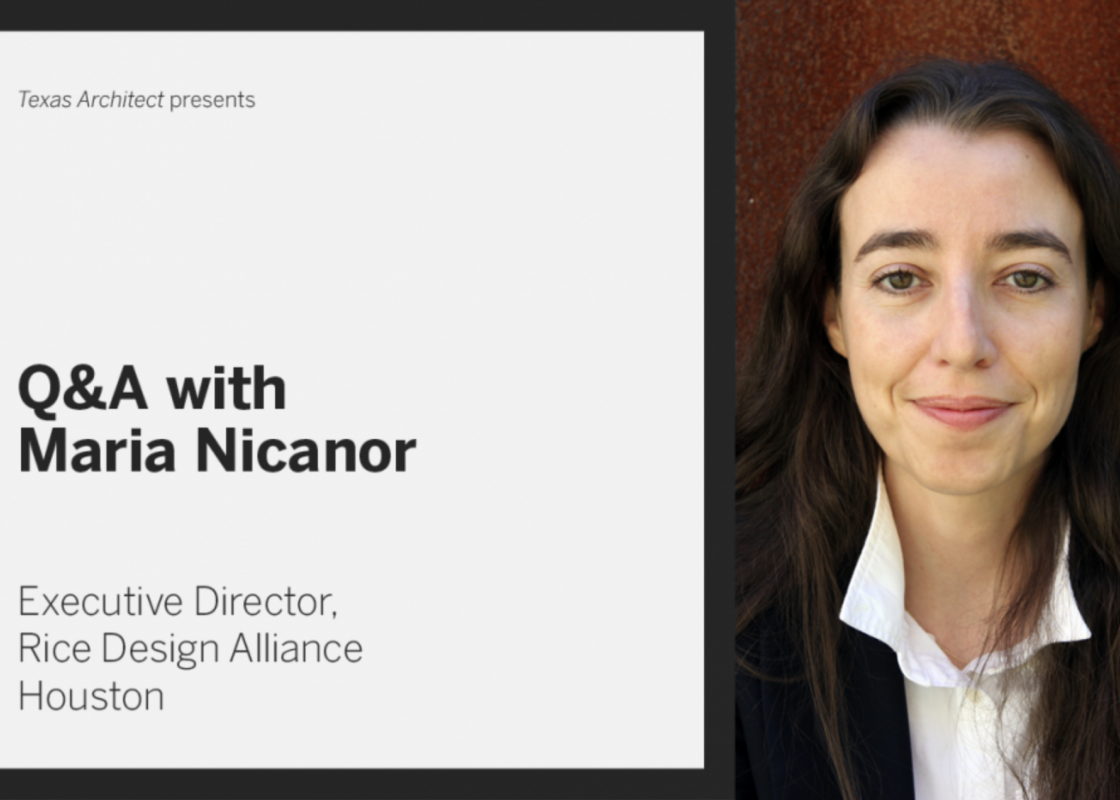 Maria Nicanor is executive director of the Rice Design Alliance in Houston. Previously, she served as the inaugural director of the Norman Foster Foundation in Madrid and has been an architecture and design curator at the Victoria and Albert Museum in London and at the Guggenheim Museum in New York City. Texas Architect Editor Aaron Seward spoke to Nicanor recently about her tenure at RDA thus far and her goals for the organization in the coming years. The following conversation has been edited for clarity and length.

Aaron Seward: You’ve been director of RDA for a couple years now. You arrived in the wake of Hurricane Harvey and have been leading the organization through an unprecedented global pandemic, so it’s been eventful. How have these crises impacted RDA and your view of the role of an organization like this in society?

Maria Nicanor: Yes, it’s certainly been eventful at many levels in a very short amount of time! The vision for a new moment for RDA was always dual and continues to be so — to continue to actively create programs and publications that address our local urban environment here in Houston and its region, while also connecting it to a larger national and international discourse of ideas on how we can improve the way we live in cities today.

What happens around us directly influences the way we program at RDA because we deal with the reality of how our city changes, shifts, and grows. We need to have both a rapid-response kind of approach to the here and now, as well as a reflective, slower analysis mode through which we take on topics deeply and with the perspective of time.

Harvey was an example of that. While we programmed and published much about the immediate effects of it in Houston, we also looked back at the many programs RDA had devoted to flooding, water management, and flood mitigation efforts over the decades, all while positioning Houston as a global example of the risks of climate change, as a city that can very well be a model for what’s to come in other cities worldwide. We brought together local engineers to discuss the planning challenges, side by side with the United Nations Water Envoy.

As for the pandemic: Just as Harvey was a distinctly Houston event that we tackled as an example of what is to come globally as an effect of climate change, the recent pandemic very much inverted that dynamic by having us reflect on the consequences of an unprecedented global event on our local day-to-day. The same could be said of the recent global uprising around racial equity and the Black Lives Matter movement. Some of these global events have affected the formats in which we program — most notably, an almost entire shift to virtual programming. But they have also made us take a closer look at ourselves and act accordingly — in the case of the role of design in the racial diversity debate occurring nationally, we partnered with advocacy groups like Pascale Sablan’s Beyond the Built Environment or NOMA’s Houston and national chapters that are working for increased racial equality in the design fields, and took a closer look at our own guidelines for diversity in our programs, writers, programming topics, and even our internal composition to remain accountable as an organization.

And then there’s the rest of the topics that perhaps don’t make the headlines like hurricanes or global pandemics might, but which still are as important to our city, if not more, on a day-to-day basis. Just this year, we’ve devoted all of our programming to the topic of quality housing and the housing affordability crisis in Houston, for instance.

You mentioned the role of an organization like RDA in society. I believe we can be great connectors because we bring different voices to the table for a holistic conversation that includes everyone involved in a particular topic. We don’t look at housing just through the lens of its architectural design, for instance. An example: We just recently hosted our first online Civic Forum this past November 11, “A House of One’s Own,” to which we invited architects, but also elected officials, neighborhood activists, researchers, writers, and real estate developers for a real conversation about each of their roles and the ways in which they could better interact. I believe there is great value in being an organization that is a connector — between academia and practice; between designers and civic leaders; between experts and non-experts alike.

AS: RDA’s annual gala will be a remote affair this time around. What do you have in store for the gala, and how has the move to digital changed the event itself?

MN: This year, as opposed to gathering almost 1,000 guests from the design industries, as in years past, we put our TV-producer hats on and thought we would at least try to put on a bit of a content-rich program that is worth the while of our viewers. So while we will indeed be going online, we’ll do so with a program that is very mission-driven for us and that addresses a topic both we and our 2021 Co-Chairs Stan Marek and Mike Holland, from MAREK, feel very passionate about.

Our online event — I hesitate to call it a gala — is themed around the title “Who Builds Our City?” and is a celebration of the craft professionals, workers, and design practitioners who have built, are building, and will build Houston. Featuring some leading voices in design and construction in the city, as well as some longtime makers and craft experts, the piece examines the history of construction culture, the challenges to the building industry (including items such as immigration), and the future of Houston’s workforce, without which our city and the systems that support it simply wouldn’t exist. It’s a timely topic that we hope will interest many, particularly in the current environment. We want to reach as many as possible with what we think is an important message, so this year, the program, which will air online on January 28, 2021, will be free and open to everyone with an interest to join. Anyone who’d like to watch, can register here.

Can you tell us more about the transition to online programming and the next issue of Cite magazine?

Pandemic isolation has propelled us in an accelerated way to a new phase for RDA, which necessarily has become more strongly digital. We need to find the positive side of this new reality, especially as it seems to be here to stay for a while longer. I see this as an incredible opportunity to produce quality digital programming, which we’ve been meaning to do anyway — short reportages, interviews, and more video content. These are all formats I believe can communicate architecture, design, and urbanity better than many others, and they’re some of the ways in which we hope to continue growing in the future.

At the same time, the digital is not the panacea and solution to all, and we remain strongly committed to the importance, beauty, and strength of the printed word through the publication of our magazine, Cite. Cite is and will continue to be the soul of RDA. The next issue is coming out with some delay, but to our Cite lovers: Do not fret; maintaining the connection to the printed publication and all that it represents is extremely important, to me personally and to RDA as an organization. We are also very lucky to have recently added Jack Murphy to our RDA team as Cite’s new editor to push our publishing activity forward intelligently and at greater speed. Jack is hard at work on the magazine’s next annual issue, Cite 102, which is being redesigned by MG&Co., the local design practice led by Noëmi Mollet and Reto Geiser, to come out early next year, so stay tuned for the new issue.