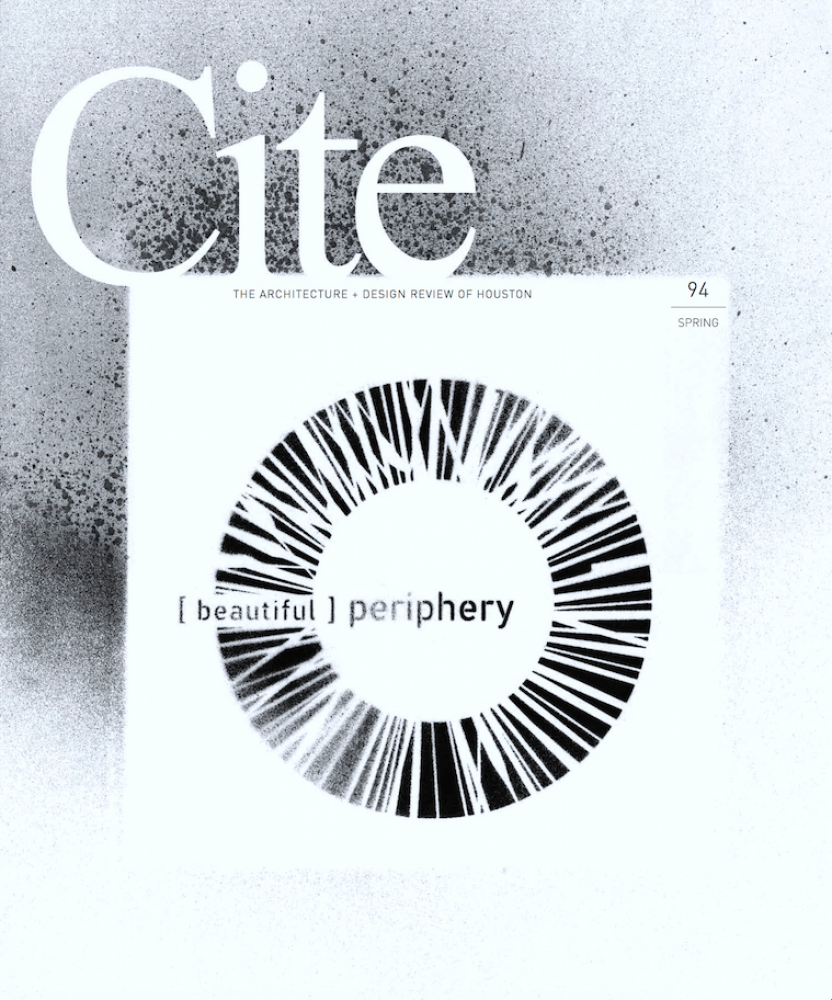 In this special issue of Cite—The Beautiful Periphery—we explore the contemporary mega- lopolis of Houston beyond Loop 610. Sometimes derided, though largely cast off and ignored by the powerful and elite the increasingly diverse periphery is home to most Houstonians. Economies of scale, islands, and spines de ne this landscape and our mundane, everyday places give it form. Subdivisions, apartment complexes, strip malls, big box stores, and shopping malls—these pieces or fragments aggregate without seemingly adding up to anything more than discontinuous parts. At the same time, slowly and nearly indiscernibly, these places are appropriated and transformed into something beautiful.

Houston’s periphery is layered and imperfect—yet it is also organic and authentic. Our goal has been to explore this periphery and methods of its production, appropriation, and adaptation. Albert Pope, Gus Sessions Wortham Professor of Architecture at Rice University, shares his insights on the megalopolis and forces that shape our contemporary cities—concluding that “[i]t is not possible to project a viable tomorrow if we remain willfully blind to the urbanism that we produce today.” Susan Rogers, Director of the Community Design Resource Center and Assistant Professor at the University of Houston, investigates 1970s era multifamily housing in Houston—the good, the bad, and the ugly—through the lens of change and adaptation. Natalia Beard of SWA Group shares a visually compelling and rich proposal for the  ea markets along Airline Drive. Joseph Altshuler argues that the typical backyard fence is a potent instrument of organizational power and visible manifestation of the “cul-de-sac city,” sharing a series of playful proposals to transform this element of division into a point of connection. Judith K. De Jong, architect, urbanist, and Assistant Professor at the University of Illinois at Chicago School of Architecture, explores the mutations among urban and suburban strip malls and big box store typologies, while Allyn West gets up close to criticize the new Walmart on Wayside. Capturing the unexpected beauty of the periphery, photographs by Paul Hester are intermingled throughout this issue.

Houston—created incrementally and informally without a master plan or a grand vision other than its highways—reflects the human needs, daily routines, and conventional desires of its people. We must come to terms with the complexities, challenges, and futures of this landscape as a means to build a be er city. We propose that, in fact, amid such seemingly adverse conditions, resilience, innovation, and adaptation are already driving transformative change.

An Interview with Albert Pope: When Talking About Houston, the Traditional Terms of Architecture Quickly Fall Apart

The [Beautiful] Projects: Contradiction and Complexity

Sub/urban Mutations: Developers Inside the Loop Could Learn a Thing or Two From What's Happening Outside the Loop

Walmart Transcends the Dumb Box: Just Not in Houston

The Coroner's Report: A Review of The Architecture of Art Museums: A Decade of Design: 2000-2010

The Mixed Use Future of Now