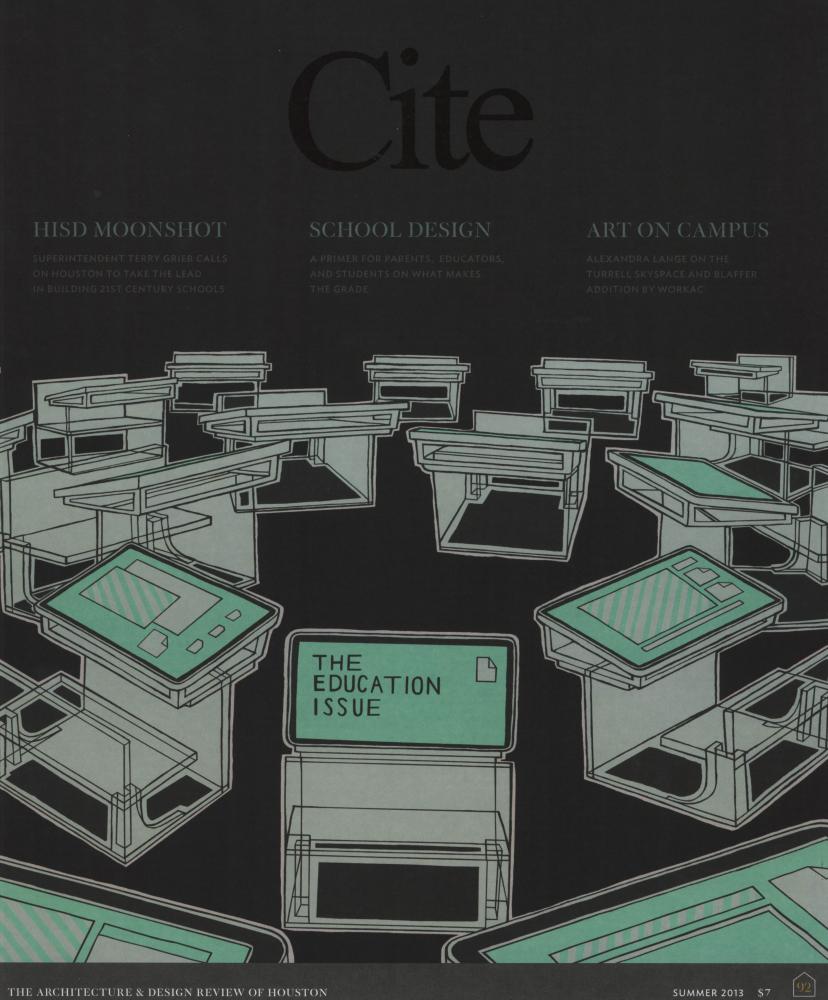 “We shape our buildings, thereafter they shape us,” Winston Churchill once said. As an architect who designs schools, I have repeated these words many times—to both clients and colleagues— but the process of editing this issue of Cite has forced me to re-evaluate their meaning. When those words were said, it was a different century, when buildings served a different purpose. Buildings were institutions made of stone; impregnable, they communicated to young and old the strength of a nation.

We now live in a time when the nature of knowledge and production have fundamentally changed, and as a result our institutions are more fluid and we interact differently with our buildings. We change them, and we are not simply awed by them. We may be at first shaped by buildings, but those buildings and the institutions behind them must now be more open to reshaping. This is a world where education is—and when it is not it should be—fluid and dynamic, and our schools and campuses should reflect that fluidity.

The values we put in these buildings—like environmental awareness, technological in- novation, and freedom of creativity and collaboration—will be the values that shape Houston’s future. The goal of this issue is not only to communicate the changes taking place at Houston’s institutions of learning, but also to allow you to choose your path to contribute as well.

The $2 billion Houston Independent School District (HISD) bond of 2012 makes a de facto city planner of Superintendent Terry Grier. My interview with Dr. Grier reveals big dreams and visions that are making Houston a laboratory for school reform and design that the nation is watching. A playful selection of images from a 1970 publication by the Rice School of Architecture shows ideas far-fetched 40 years ago—schools without classrooms and students interact- ing with mobile devices connected to central computers. Even the future has a long history. Steven Thomson reviews a New York exhibition, The Edgeless School, providing Houstonians with a sense of what districts across the country are doing. MaryScott Hagle’s “A Primer for School Design” identifies lessons learned, positive and negative, from four new campuses built with 2007 HISD bond funds.

Dr. Renu Khator, Chancellor of the University of Houston (UH) System and President of the main campus, also has big dreams, and has already made major strides towards turning a “commuter school” into a Tier One Academic Research University. The question must be asked: Does UH’s built environment achieve such lofty goals? In her review of the new James Turrell skyspace at Rice University and the addition to the UH Bla er Gallery by WORKac, Alexandra Lange writes, “Students think they are learning from their classes, but the college experience is so much more.” Her insights ring true for all schools.

The billions of dollars being spent put the spotlight on education environments in Houston. Institutional spending is bureaucratically heavy—long in decision-making and often compromised in vision. But the Houston community has said, Yes! We have seen our rapidly growing city and we know that continued success depends on our future generations. We also know that we must get it right and we must get it right now. As parents, employers, architects, and city builders, we must help our youth imagine their future. We must help shape their values and inspire their creativity with the environments we make today.

William D. Kendall: He preferred that few know his name.

Change on the Horizon for HSPVA: UH Students Take Up the Challenge of Accommodating a Complex Program on a Tight, Downtown Site

Thick Skin: BBVA Compass Stadium is heating up the city in more ways than one

Not Your Grandfather's School: Terry Grier speaks with Cite about plans to put Houston at the cutting-edge of school design.

New Schools for New Towns: The Future of Education has a Long History

A School Design Primer: What are the lessons learned from new schools funded by the 2007 HISD bond?

A Tale of Two Signs: Twilight Epiphany and the Newly renovated Blaffer Art Museum at the University of Houston Provide Two Examples of How Art Can Animate and Reshape University Campuses

Is University of Houston's Campus Worthy of Its Tier 1 Status?

Democratic Vistas: On the Chicago Sidewalk