Where is Houston Affordable? A Report by Irene Vázquez

Houston has been touted as one of the country’s best buys for millennials: Star restaurateur David Chang recently christened Houston the most exciting food city in America; Houston’s Museum District is one of the top in the country, with 11 museums open free to the public on a regular basis; best of all, housing is frequently cited as some of the most affordable in the country.

The real question is: affordable for whom?

With the advent of interactive data visualizations that map income distribution, Houston’s income segregation is all too visible. The city can be divided in two parts. Houston’s wealthiest populations form an arrow that starts just south of Addicks and runs through Piney Point, River Oaks, ends at the intersection of I-10 and 59, and juts just north and south. The rest of the city that forms a rough horseshoe shape remains poor relative to the rest of Texas. 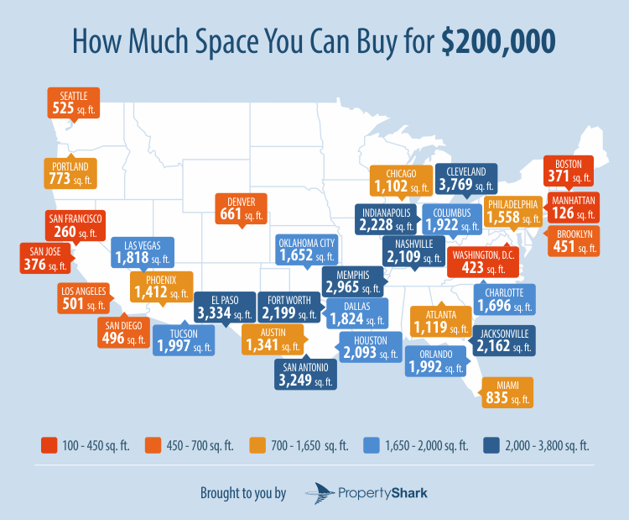 Average costs across all of Houston show the city as among the most affordable in the U.S. Source: PropertyShark.

When the affordability of cities are compared, however, the cost of properties are averaged across the entire incorporated area. In a recent study, PropertyShark, a company that gathers and analyzes information for real estate professionals, shows Houston to be among the most affordable major cities in the United States.

But the reality is that how far your dollar gets you depends heavily on where in Houston you buy: inside the arrow or inside the horseshoe. The sheer geographic size of Houston tends to obscure what happens on the ground, especially in comparisons with other cities. These maps get across the problem of comparing compact incorporated cities with cities that have effectively incorporated a whole region. Chicago, Manhattan, Santa Barbara, Washington, D.C., Boston, and San Francisco could all fit within the boundaries of the incorporated area of Houston. The area that Houston encompasses is so large — an area that includes many so-called “rurban” areas that were founded by Black communities but have been left out of many of the amenities that annexation promised — that extremes in housing costs wash out leaving a false overall impression of affordability.

A comparison of "the arrow" and "horseshoe" of Houston to Seattle and Cleveland. Source: PropertyShark.

PropertyShark used 2016 US Census data to determine the median home price and their proprietary data to determine median home size. At the request of Cite, the company analyzed affordability in two different areas. Arrow Houston is approximately 107 square miles and Horseshoe Houston is around 220 square miles. The calculations leave out vast areas beyond the horseshoe including Kingwood and Clear Lake, so Houston's total footprint is larger than this total. In the horseshoe area, Houston does seem rather affordable, with $200,000 buying you 3,125 square feet, on par with cities like El Paso or Cleveland. Inside the arrow? That $200,000 buys you just over 1,000 square feet, a price point more along the lines of Chicago or Miami. 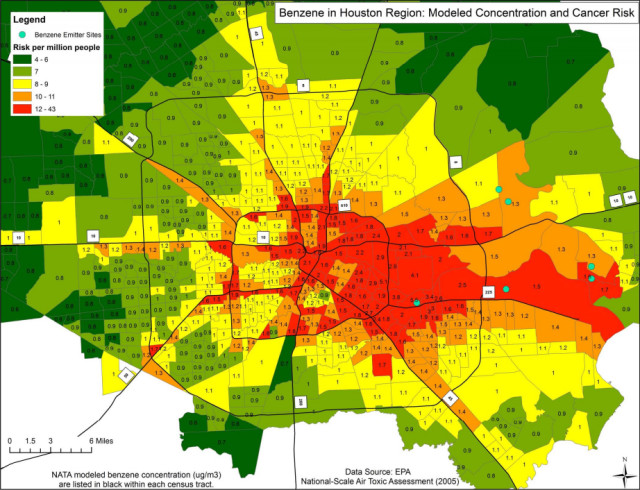 This data set underscores what many already know about the reality of living in Houston. While Arrow Houston has high housing costs but quality amenities, the myriad (often minority) communities that make up Horseshoe Houston often face food deserts, air pollution, lack of government services, a history of redlining, or displacement. The arrow and horseshoe are recurring figures in most maps of Houston's social, economic, and environmental challenges. Among the most striking examples is the map of cancer risk that draws on EPA data. Although the wealthy communities along highways show elevated risk, the bulk of high-risk areas are in Houston's horseshoe. A study by the Texas Environmental Justice Advocacy Services and the Union of Concerned Scientists found community members in Manchester (in the horseshoe) are more likely to get cancer than more affluent neighborhoods in Houston. Just this summer, community members and activists have mobilized to prevent Valero's request to amend a permit that would allow small amounts of hydrogen cyanide, a poisonous chemical compound, to be released at the Valero refinery adjacent to their neighborhood.

Current initiatives like Mayor Sylvester Turner’s Complete Communities Initiative or the GO Neighborhood programs led by the Local Initiatives Support Coalitions seek to remedy some of these inequities. In addition, Harvey has accelerated the stresses and efforts to improve on access to affordable housing. Ongoing rebuilding efforts force answers to existential questions that Alexandra Miller and Andreanecia Morris asked in September 2017 about lessons from post-Katrina New Orleans on how, where, and what to rebuild.

How the Sharing Economy Could Transform Houston by Raj Mankad

Kashmere and Trinity Gardens One Year After Harvey: A Follow-Up Report by Lara Purser