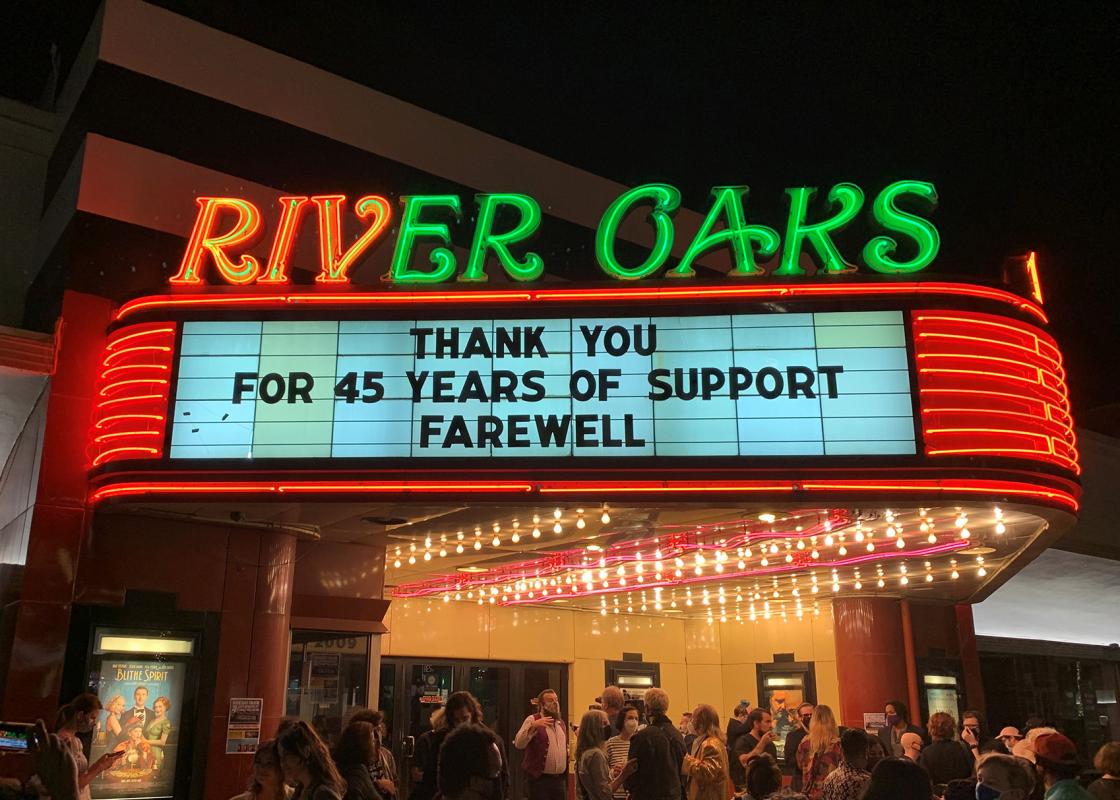 The marquee of the River Oaks Theatre on its final day of operation, March 25, 2021. Photo by David Welling.

There was a time when architecture survived the ages. The massive Egyptian pyramids, the Roman Colosseum and Pantheon, and the continued unearthing of Pompeii relics are evidence of this. Not even the massive eruption of Mount Vesuvius could completely obliterate portions of its nearby civilization. The same can’t be said for modern architecture, which is designed to last long enough to secure its desired return on investment. Once it’s deemed obsolete, it falls to the wrecking ball with more speed than volcanic ash in Italy all those centuries ago.

This is especially true in Houston, where local regulations do little to protect even the buildings deemed to be of significant historical importance, and especially so if they are privately held. The latest example of this is the recently closed River Oaks Theatre—the city's oldest operational cinema. As of this writing, there’s no indication of what its future will be. It may reopen with new tenants; it may be converted into retail space like the nearby Alabama Theatre; or the whole shebang may be razed. Its fate lies solely with Weingarten Realty Investors, which owns the property, and they aren’t saying. 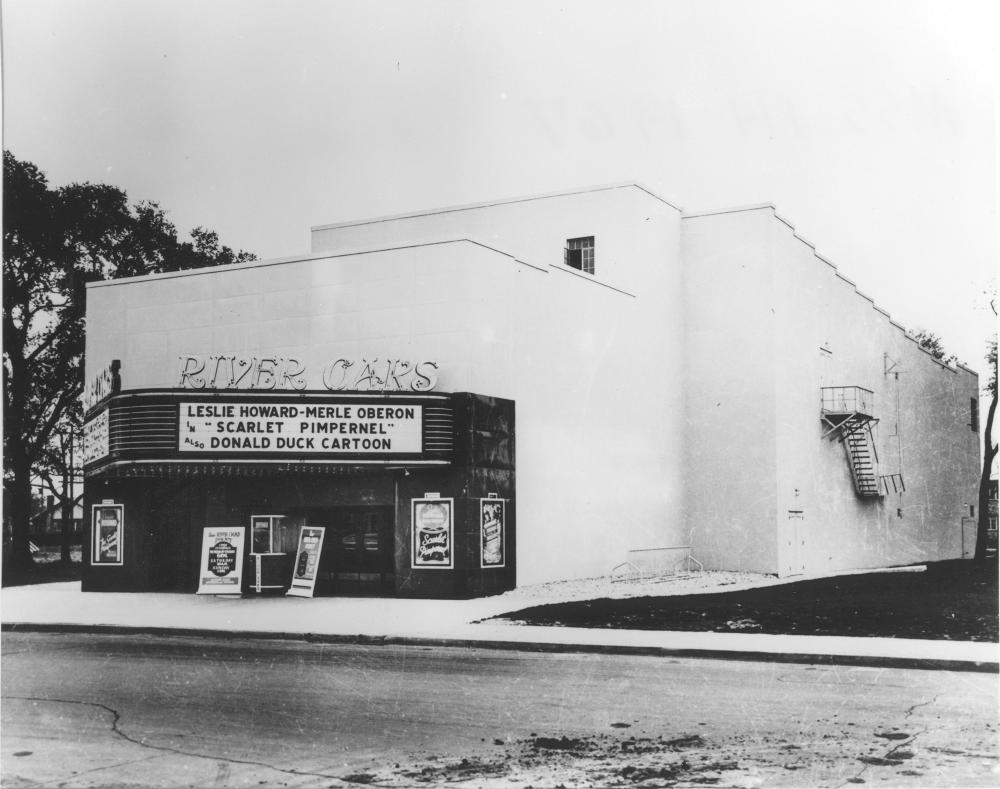 The exterior of the River Oaks Theatre upon its completion in 1939. MSS0114-1967, Houston Public Library, Houston Metropolitan Research Center.

Over the decades, the River Oaks Theatre evolved into far more than a place to simply catch a movie. Eighty-plus years of operation can do that. The theatre originally opened on November 28, 1939, the last of four theatres to open that month. Of the others—the Stude in the Heights, the Navaway, and Interstate’s Alabama Theatre on Shepherd Drive—only the Alabama survives, though in an impaired form as a Trader Joe’s grocery store. The Navaway closed in the mid-sixties, while the Stude Theatre found new life as the Stude Revival Center church. It was demolished last year.

In terms of architecture, the River Oaks Theatre represented a combination of the Art Deco and art moderne style, popular in that era. The architecture was handled by Dallas architects Pettigrew and Worley. The firm designed theatres throughout Texas, including the Forest in Dallas and the Ridglea in Fort Worth. They also completed four other theatres in Houston: the Fulton, the Garden Oaks, the Broadway, and the Santa Rosa. Interior murals and decorations were created by Texas artist James Buchanan “Buck” Winn, including two grand vertical bas-relief sculptures located above the exit doors on either side of the screen, the figures representing the elements of land and sea. Winn is well recognized for his works at the Dallas Texas Centennial, the New York World’s Fair, the Gonzales Memorial Museum, and the huge “History of Ranching” mural for the Pearl Brewing Company. He also rendered designs for the Dallas Village Theatre. 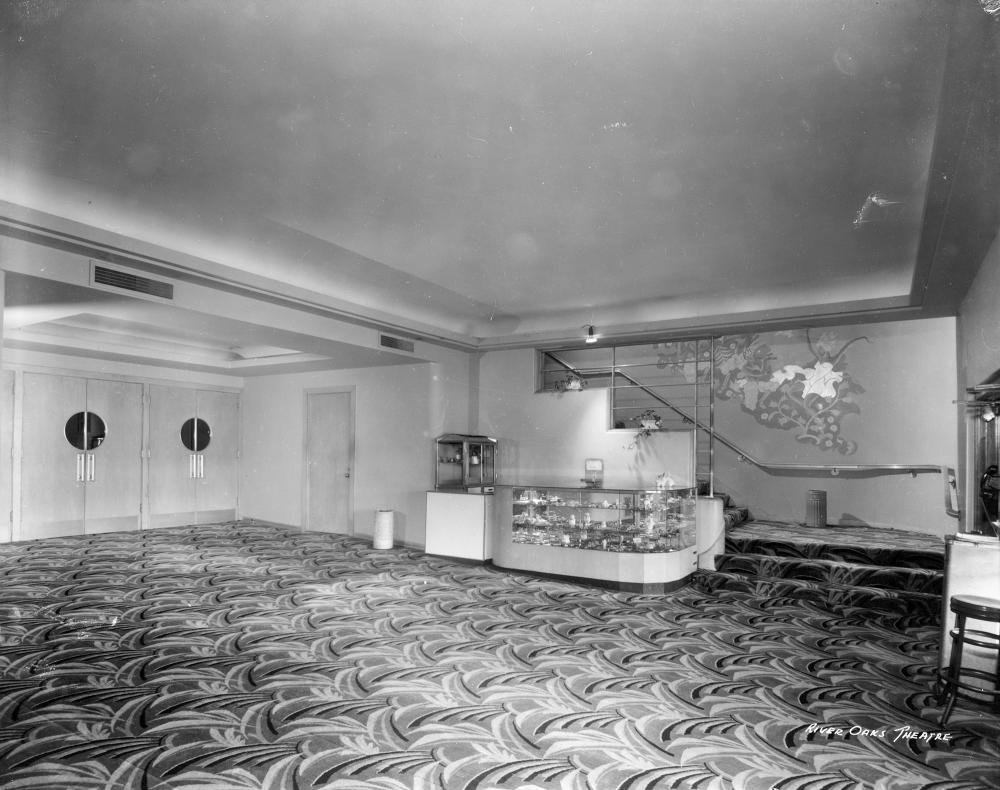 The interior color scheme of the River Oaks lobby and auditorium was one of straw tan, green, and coral. It included a balcony, a standard feature of many theatres up through the fifties, which was later subdivided into two additional upstairs auditoriums once multi-cinema structures became the industry standard. The original stairway leading to the balcony included neon tubes beneath the aluminum handrail.

The auditorium seating included alternating, double-width end seats in the center aisle, a popular feature for those wanting extra seating room. Couples on first dates also found them desirable. The auditorium held a seating capacity of 923.

Originally a standalone structure, it was soon surrounded by a shopping center on both sides, making it an integral part of the business district on West Gray.

Like most other theatres of the era, the River Oaks served its neighborhood. Others nearby included the Yale and State Theatres, both located on Washington Avenue. In 1947, the River Oaks was acquired by the Dallas-based Interstate Theatre chain, which dominated the region and had established early standards with the historic 1923 Majestic picture palace on Rusk Avenue. Interstate operated the River Oaks through the mid-seventies. In 1977, operations were taken over by Movies, Inc.; the company eventually became Landmark Theatres and continued to operate the cinema until its closing this last March. 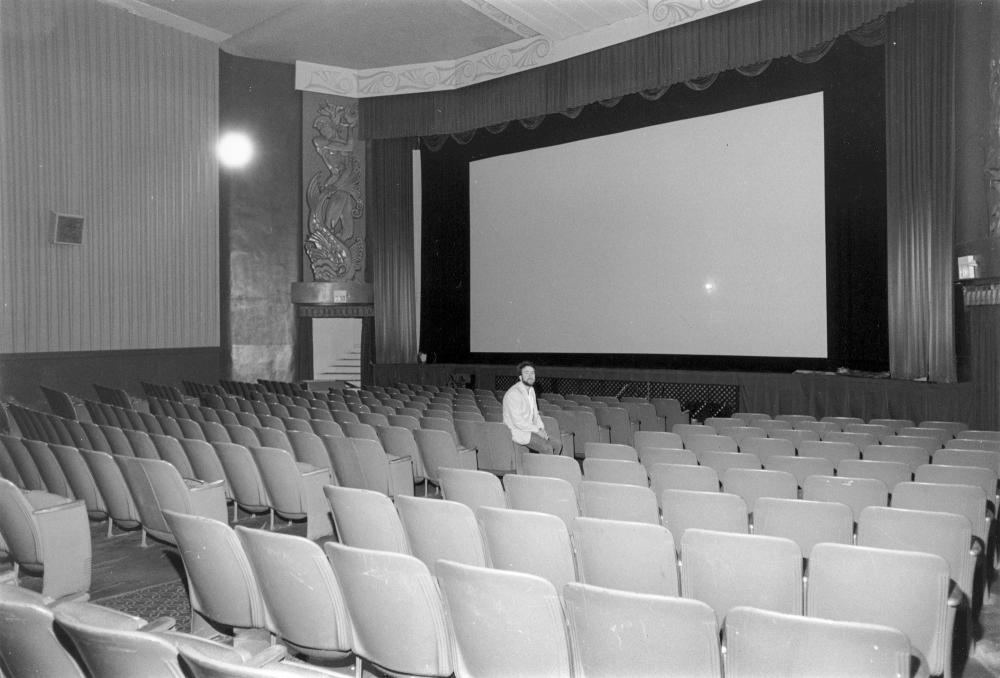 Here’s when the magic happened.

The late seventies were a few years before the arrival of home video and cable television and well before computers introduced the world to YouTube and livestream programming. Watching a favorite movie was not a plug-and-play activity. Instead, one had to wait until a select TV station showed it. Want to watch Casablanca or the Marx Brothers? Pray and hope it might turn up for a single showing. That wait could be years in coming.

The River Oaks became a mecca for movie addicts. I received my college education in cinema during those years when I would spend multiple nights a week there. Under the regime at the time, movies were switched every two days, most often as a double feature. A three-month calendar became a standard piece of wall decoration for movie fans, sometimes pinned to refrigerators with magnets. The schedule featured classics, foreign films, and rare titles, often combined to tremendous effect: The Big Sleep paired with Woody Allen’s Play it Again, Sam; the original Flash Gordon with the X-rated Flesh Gordon; double bills of Kurosawa, Fellini, and Bergman; the epic, seven-hour Russian version of War and Peace shown over several nights. Cartoon shorts often ran before the main features. Prior to home video, this was how movie fans fell in love with cinema—on the big screen where it was meant to be seen.

Plus, there were the midnight shows, which aired counterculture films that proliferated at the time. While many resonated with the late-night crowd, such as Harold and Maude, Basketcase, and Forbidden Zone, the true king of the midnight flicks was The Rocky Horror Picture Show. This did not originate with the River Oaks. After its first run in Houston at the Tower and next its midnight home at the Alabama, it came to rest at the River Oaks and has remained so until the present, complete with audience participation and a stage show. These events are far more than a two-hour watch party. For many, this is a community gathering of like-minded people, and the movie’s continued standing for over forty-five years is proof of its theatrical legs. More than that, it’s a tribal bond. Ask any attendee.

The River Oaks repertory years came to an end due to home viewing that increased accessibility of almost any movie of choice. Landmark Theatres eventually shifted to an arts format, presenting films that might not be otherwise shown in the city. 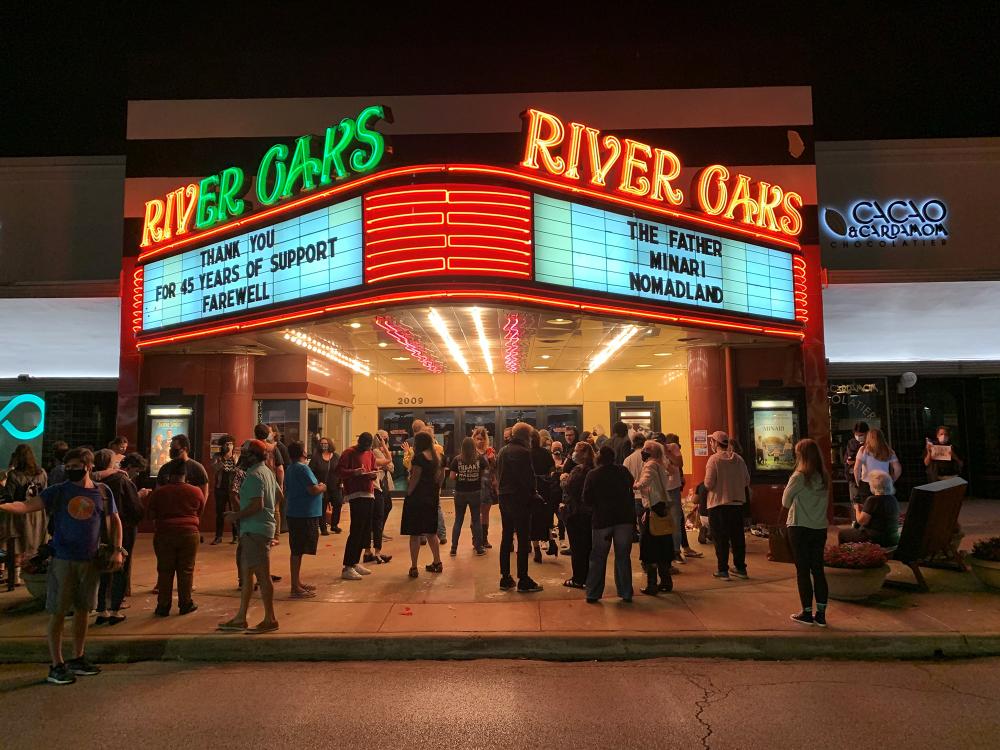 The overall scene at the candlelit gathering in front of the River Oaks Theatre on March 25, 2021. Photo by David Welling.

Houston’s art film culture hasn’t fared well. Early theatres such as the Al-ray offered foreign films during the sixties. The Rice Media Center and the Museum of Fine Arts have likewise presented movies that might not have received proper exposure. For a time, AMC and later Landmark operated the Greenway Theatre as an arthouse cinema before its closure in 2007. The River Oaks served as a consistent haven until now.

Theatre exhibition changed radically over the decades. Films that once ran on reels and platter systems have switched to digital, forcing exhibitors to do the same. River Oaks adapted to that change. More problematic has been the preference for stadium seating, a structural feature not easily realized in existing theatres. That alone brought on the demise of the Cineplex Odeon theatres in Houston. The River Oaks survived with its existing sloped floor; the only significant change was the balcony-into-auditorium modification in 1986.

The River Oaks theatre operated under the Landmark banner for nearly forty-five years, with a mix of foreign, art, and mainstream films (plus, of course, The Rocky Horror Picture Show). In 2006, it came under threat of closure, and the public responded in kind with a Save our Landmarks campaign that succeeded. 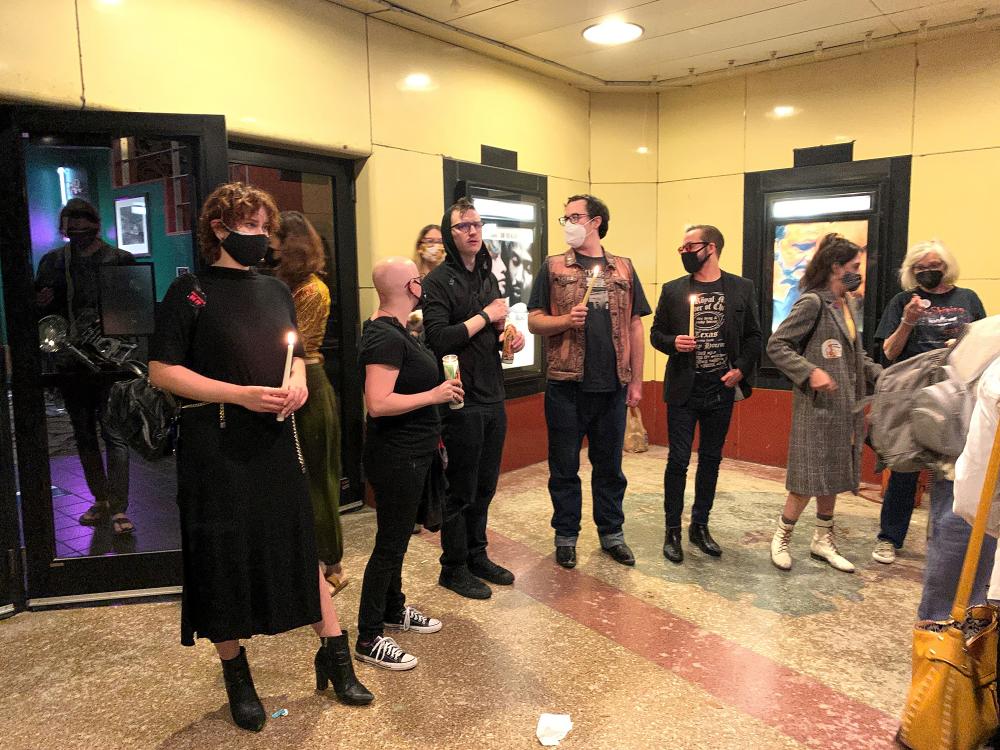 Participants at the candlelit gathering in front of the River Oaks Theatre on March 25, 2021. Photo by David Welling.

What no one anticipated was a global pandemic. COVID-19 has been responsible for the collapse of entire industries and individual companies, with live entertainment, bars, cruise lines, and movie theatres taking the brunt of the losses. Some movie chains such as Regal temporarily closed their entire network of theatres, only reopening at the beginning of April 2021. Others, such as AMC and the smaller chains, have managed to limp along with minimal crowds. Alamo Drafthouse, an Austin-based chain where meals are served during screenings, filed for bankruptcy in March. Likewise, Arclight Cinemas and Pacific Theaters recently announced that they will not reopen from their COVID-19 closures. The shutdown and public avoidance of large gatherings took a significant toll on the River Oaks Theatre.

The public became aware of the theatre’s problems in March 2021. Negotiations continued between Landmark and Weingarten throughout the month before Landmark announced its last day of operation on March 25, allowing for a final week to clear out from the building before the deadline on the 31st to vacate the property.

On its final day, a crowd showed up for a candlelit wake. The feature film downstairs was the Academy Award-nominated The Father. Notably, the opening feature in 1939 was Bachelor Mother. Sarah Gish, who once worked at the theatre, remarked that “the River Oaks has always been about family.”

The fate of the River Oaks Theatre is still uncertain as of this writing. Of course, rumors float as they will: Another theatre company may be interested; it might be readapted for alternate use; it will be leveled along with the rest of the center. All of this is pure speculation. 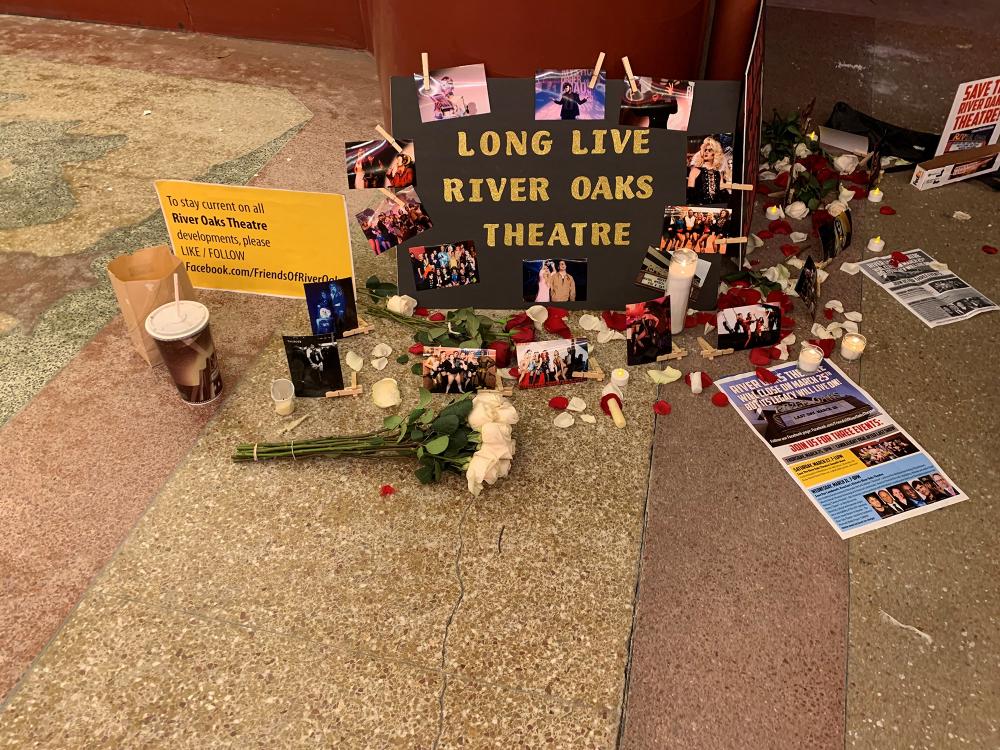 A makeshift memorial during the candlelit gathering in front of the River Oaks Theatre on March 25, 2021. Photo by David Welling.

In response, a coalition of writers, artists, preservationists, filmmakers, historians, film distributors, actors, and venue owners have formed the Friends of River Oaks Theatre. Organized as a Facebook group, their objective is to support the theatre as a cinema or revitalized space and to aid other theatrical venues in the city. This served as the topic of the March 31 Save Our Landmarks Zoom panel, which included director Richard Linklater, Houston Chronicle writer Cary Darling, Rice University visiting professor/recording artist Bun B, film distributor Bob Berney, and moderator/filmmaker Kyle Henry. As I participated in the panel, it became evident how important a space such as the River Oaks Theatre is to the community, far beyond a place to watch a movie. Linklater’s success in repurposing a vacant Austin movie house into the A.F.S. (Austin Film Society) Cinema is an example of how older properties can find new life and function.

It’s undeniable that the River Oaks Theatre represents an important and distinct part of Houston’s architectural and cultural history. Much of that past has already been decimated on the road to progress. Whether the River Oaks becomes part of that tradition is anyone’s guess.

One can only hope that eventually, the city—and those citizens who play a vital part in its wrecking ball operations—will realize there comes a point where our Pompeii will no longer exist at all. As one protest sign read, “Greed makes history disappear.”

David Welling is a Texas-based writer, novelist, and graphic designer. His lifelong interest in movies (and the places that show them) led to the writing of Cinema Houston: From Nickelodeon to Megaplex, which chronicles the history of movie theatres in Texas’s largest city.