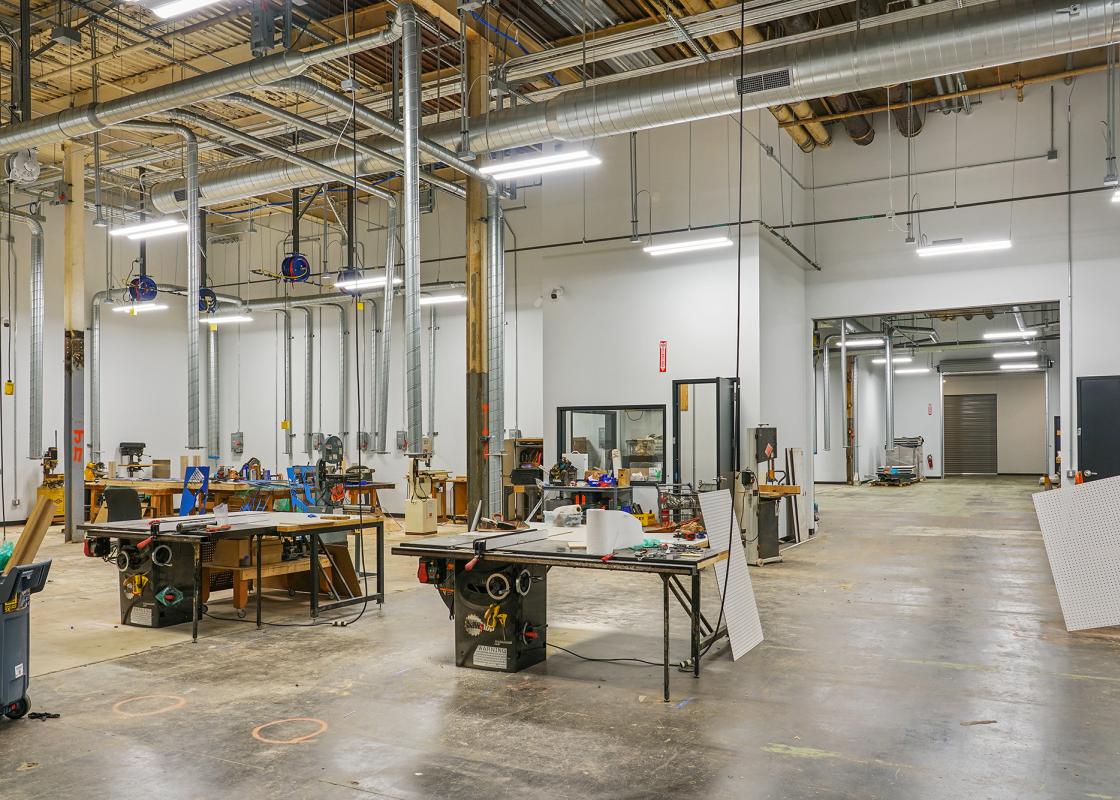 East of downtown, a new acrylic and metal sign peeps out from under the overpass on Navigation. Its colorful logo contrasts the surrounding warehouse grit, capturing your attention. Take the drive all the way past the CenterPoint Energy facility and scrap yard, and the vision gets clearer as you enter the large parking lot of a warehouse painted white. A large mural welcomes you—EAST END MAKER HUB, it reads. 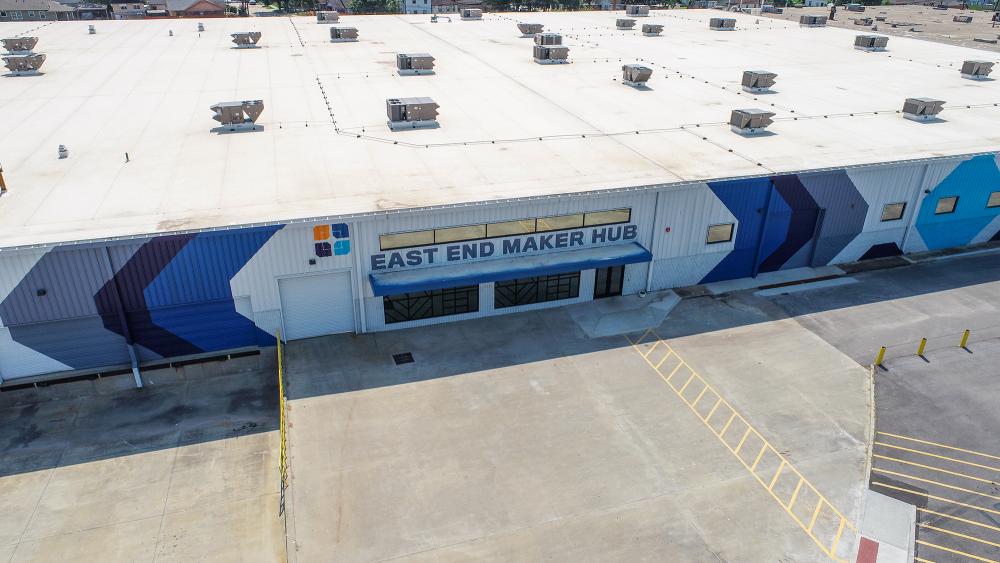 In most superhero movies, there’s an opening scene set at an undisclosed research site within a grungy factory in some remote location. The anonymity of the building, maintained through its location within an industrial park, masks its importance. I had this propitious feeling as I approached the East End Maker Hub. But instead of concealing supernatural powers, the facility possessed the excitement of the unknown. Who were the powerful minds in this giant warehouse cooking up the next big transformative idea?

As I entered the lobby, I saw a meeting taking place on the tufted sofas. A tall man got up and introduced himself as Roland von Kurnatowski, President of TXRX Labs, a non-profit makerspace that is the maker hub’s main tenant. He proceeded to show me the space. As we walked, Kurnatowski shared his clear vision of the future—and how his non-profit is helping prepare for that future. 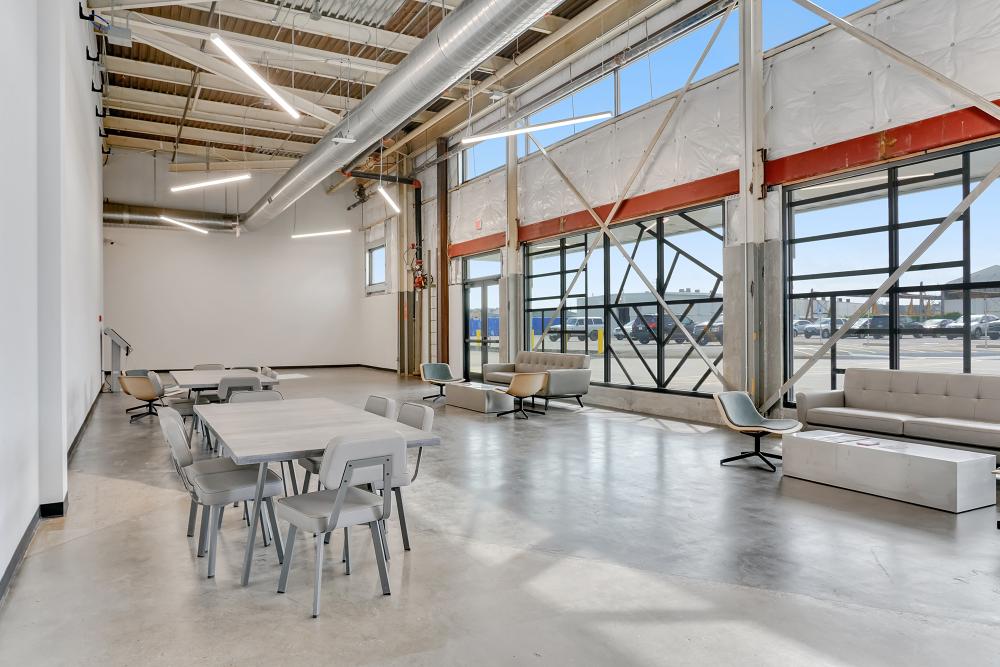 The East End Maker Hub is a new space jointly operated by TXRX Labs and UP CDC that provides membership-based classes, equipment utilization, and rentable square footage utilized by a variety of innovative businesses. Its cost of $38 million was largely paid for by almost $37 million in federal loans, grants, and tax credits. The labs and makerspace operated by TXRX Labs allow people to utilize the facilities, machines, and resources to jumpstart their ideas or careers in the “physical innovation” space. Physical innovation covers the development of ideas to be realized in the tactile world, which might or might not be supported by digital capacities.

The East End Maker Hub is an adaptive reuse project that balances industrial rawness with modern elegance. Functionality and efficiency take precedence, which is what make it such an attractive space for innovators. The architecture and interior layout allow the occupants to make the most productive use of their time. Enlarged elements like doors, room sizes, and circulation paths permit larger heavy machinery to be installed alongside the needs of a smaller human scale. Design of the space was provided by Method Architecture, with input from von Kurnatowski, and the project's general contractor was Stewart Development & Construction. 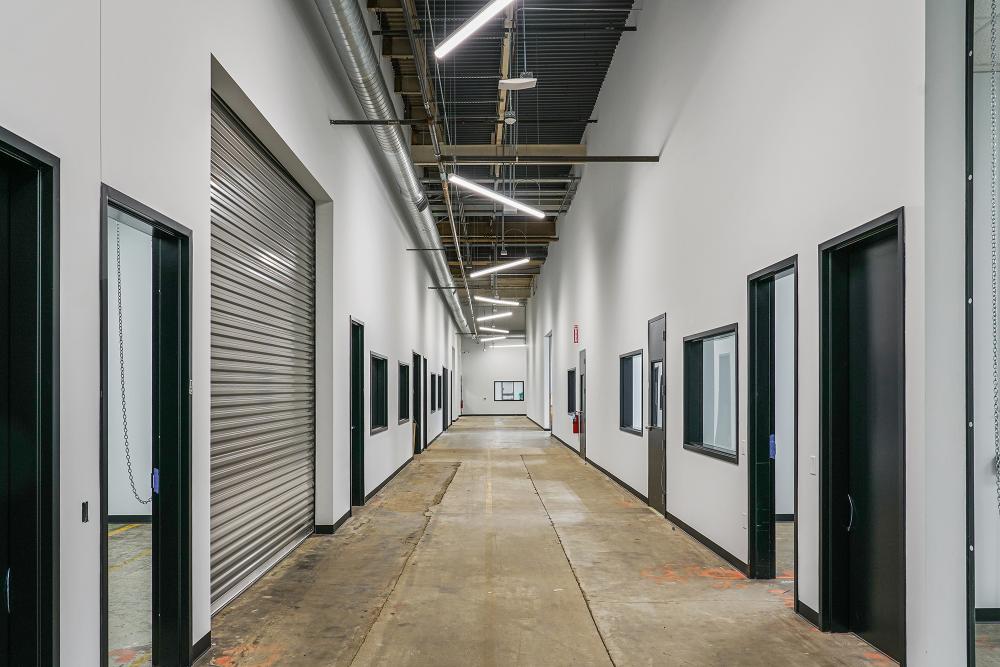 Led by von Kurnatowski, TXRX Labs has been around for about fourteen years. It started as a place to help people who were interested in fabrication, design, and engineering. (The group was profiled on OffCite, now Cite Digital, in 2012.) With a degree in computer science from Rice University, von Kurnatowski observed that the tech industry wasn’t common in Houston. Instead of trying to force something that was not Houston’s forte, he focused on the talent and skills that already exist in our city. “Why are we trying to force a digital push when Houston has such a strong physical presence in the logistics, construction, medical, and oil and gas industries?” he wondered.

He makes a good point. As the world focuses on digital innovation through software, AI technology, and apps, who will make all of the stuff that occupies our physical world? To further the hands-on nature of this type of innovation requires a lot more equipment, space, and technical skill than what is needed for computer-based industries. Inspired by places like MIT and Stanford, von Kurnatowski started with a vision and brought it to life one step at time. He wanted to create a place where interdisciplinary activity could occur between educational institutions, corporations, start-ups, and civilians. 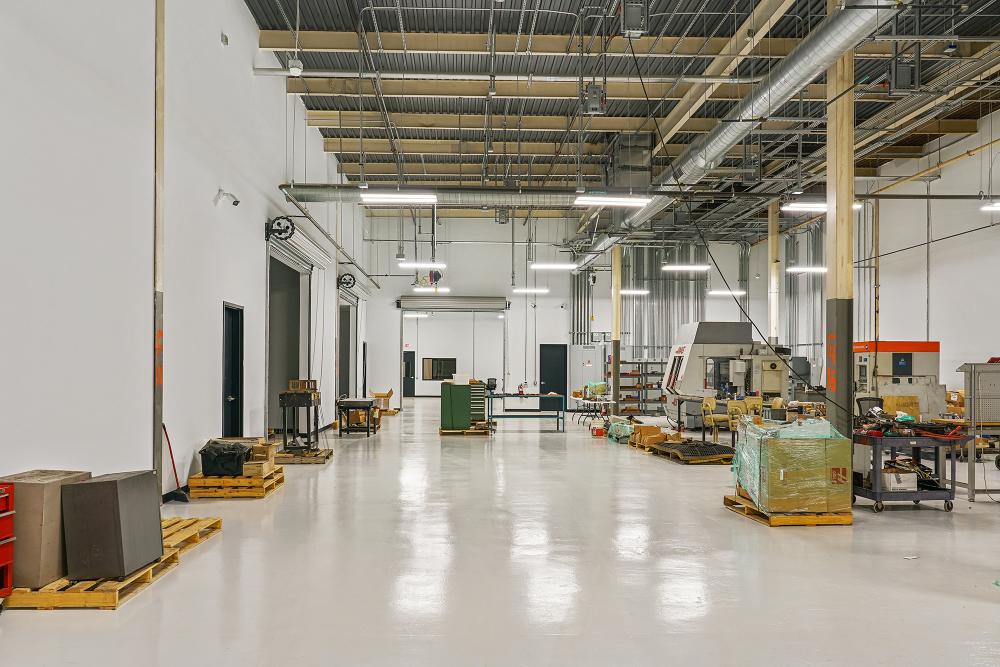 It seems to have worked. Today, TXRX Labs and the East End Maker Hub occupy more than 300,000 square feet. They not only provide the equipment and space, but also the job training, youth outreach, and community development programs which help guide people towards careers in fabrication. “You have to plant the seeds to be able to harvest something,” von Kurnatowski says. TXRX Labs is also trying to reach HISD students who aren’t interested in the traditional four-year college degree path; they want to make sure that younger students are more aware of and directed towards faster training and vocational programs. Opportunities in career and technical education can educate students on using resources such as CAD/CAM software to operate all kinds of fabrication processes. They can also lead to job prospects that make a living wage. Von Kurnatowski wants to eliminate the stigma of skills expertise and provide the bridge between learning and innovating. Consider the machining needs for jewelry, plastics, wood shop, CNC routing, welding, metal working, 3D printing, painting, ceramics, plasma cutting, and anything else you can imagine—TXRX Labs has the tools ready for you to use, and they’ll teach you how to use them.

Houston’s economy will be in trouble if it doesn’t invest in the programs that help diversify its operations and train skilled workers; this, in part, was covered in RDA’s Who Builds Our City? program last year. What this makerspace is doing now makes a huge impact in growing Houston’s economy of the future. TXRX Labs and UP CDC, who are fifty-fifty owners of the property, opened the building during the summer of 2021; what they thought would take years to lease up is running at almost 100% occupancy as of late last year. 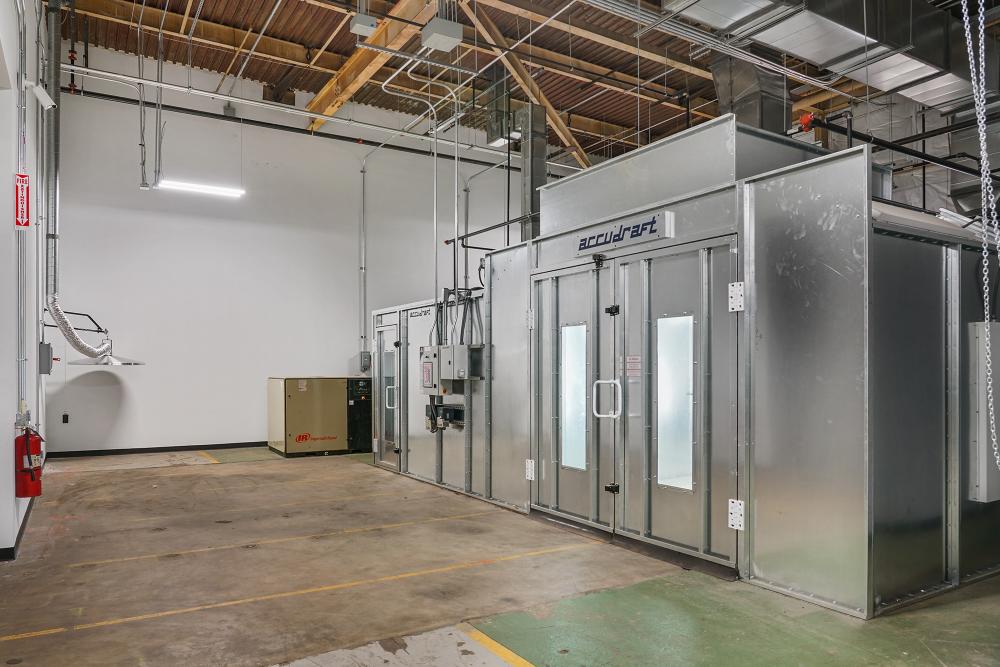 There’s an unmet demand for spaces like this in and around the Houston region. The companies and startups that occupy the East End Maker Hub’s leasable spaces could have an enormous impact on Houston’s economy. Consider Volumetric, for example, a startup currently developing methods to 3D print human organs, or Rugged Robotics, which is creating robots to print plans onto commercial construction floors. Whether it’s designing robots, researching cleaner fuel alternatives, distilling vodka, or creating beautiful paper and digital art, the East End Maker Hub brings innovators, educators, fabricators, manufacturers, and crafters together under one roof.

The seeds planted by TXRX Labs are now supporting interdisciplinary activity which will later yield even more fruit. Incentivizing and investing in resources to keep the talent and brains of Houston here is so important for the continued success of our city.