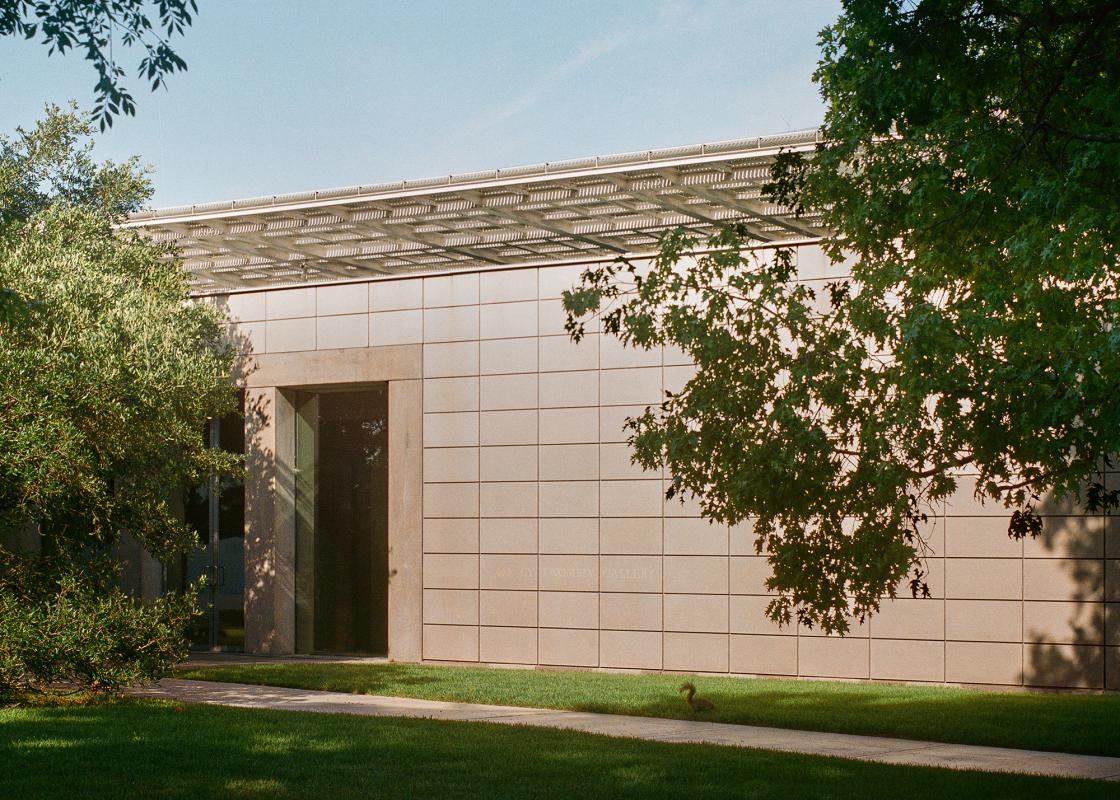 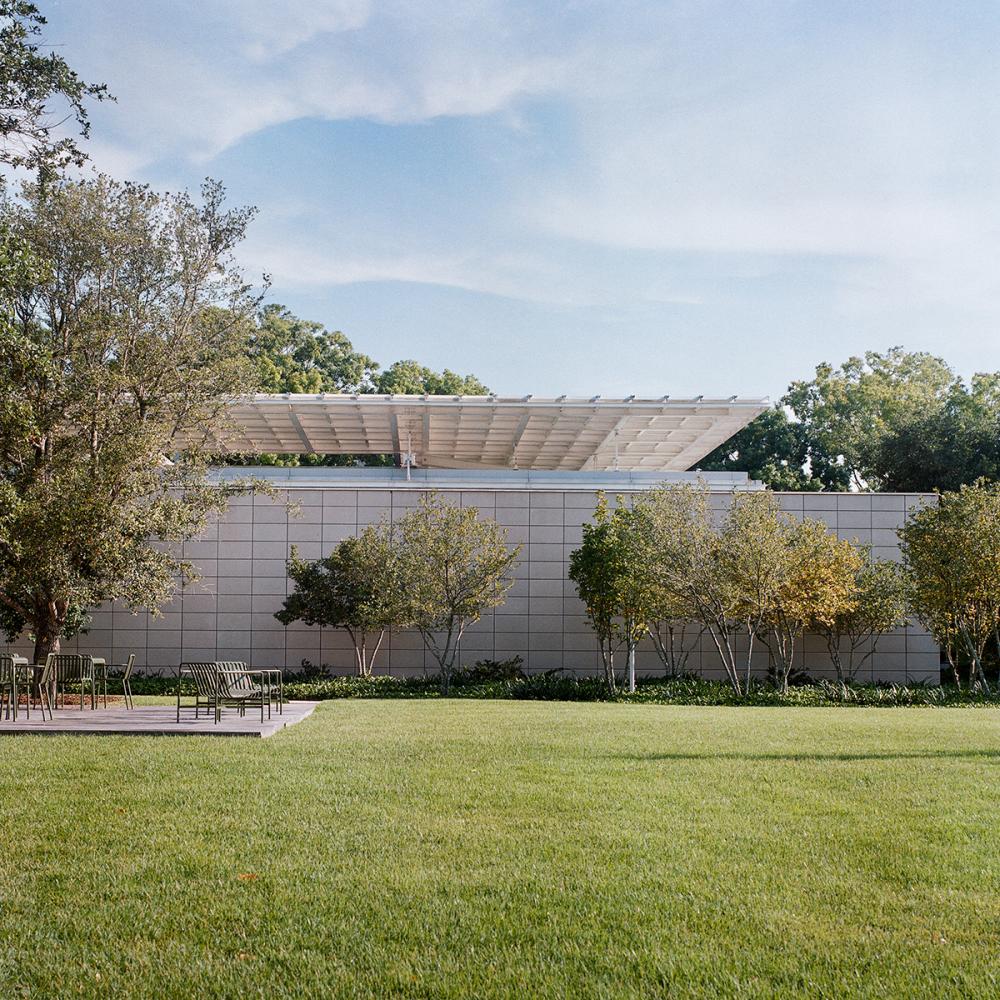 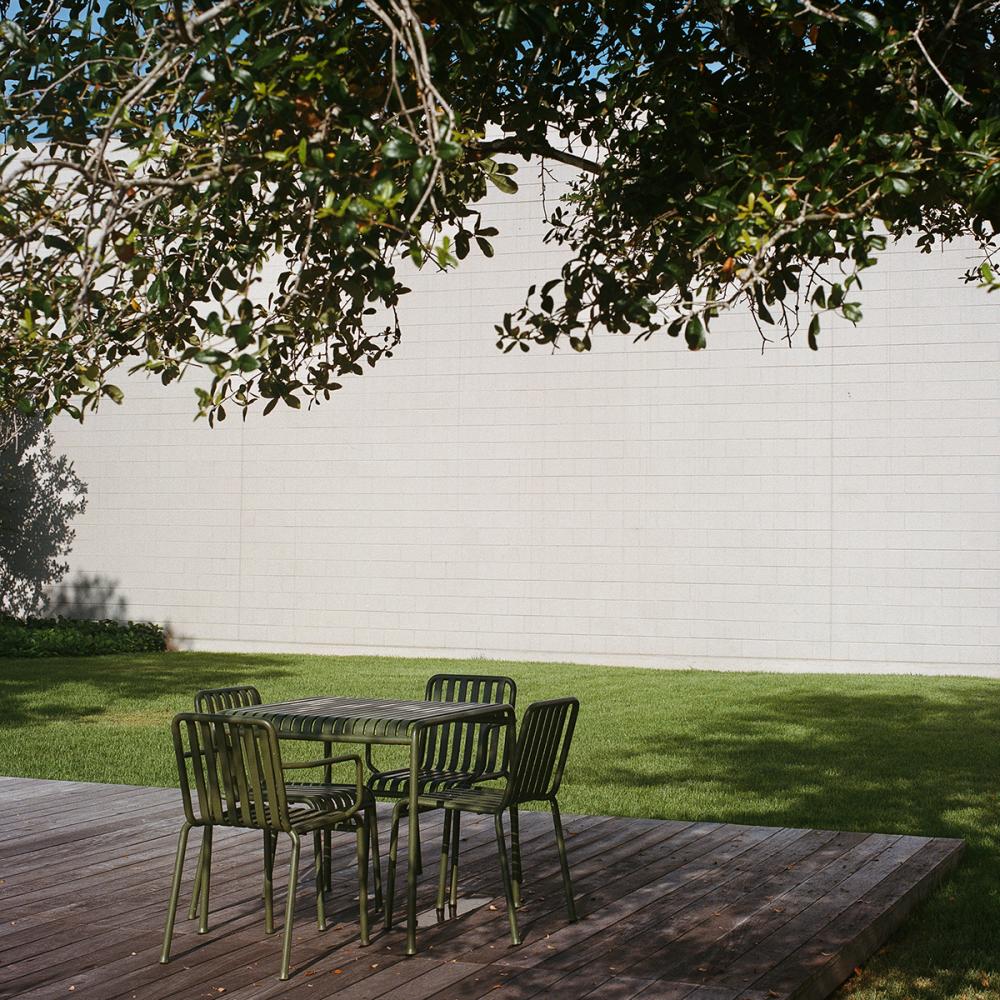 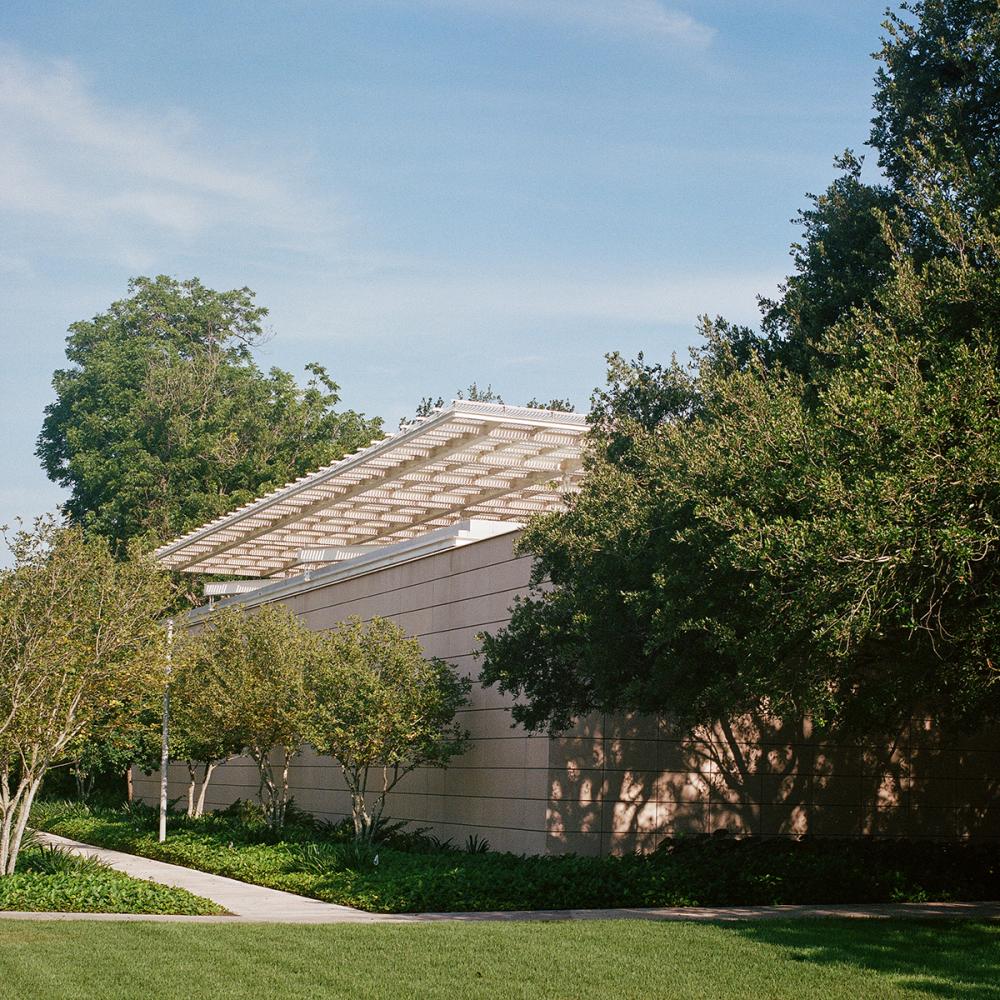 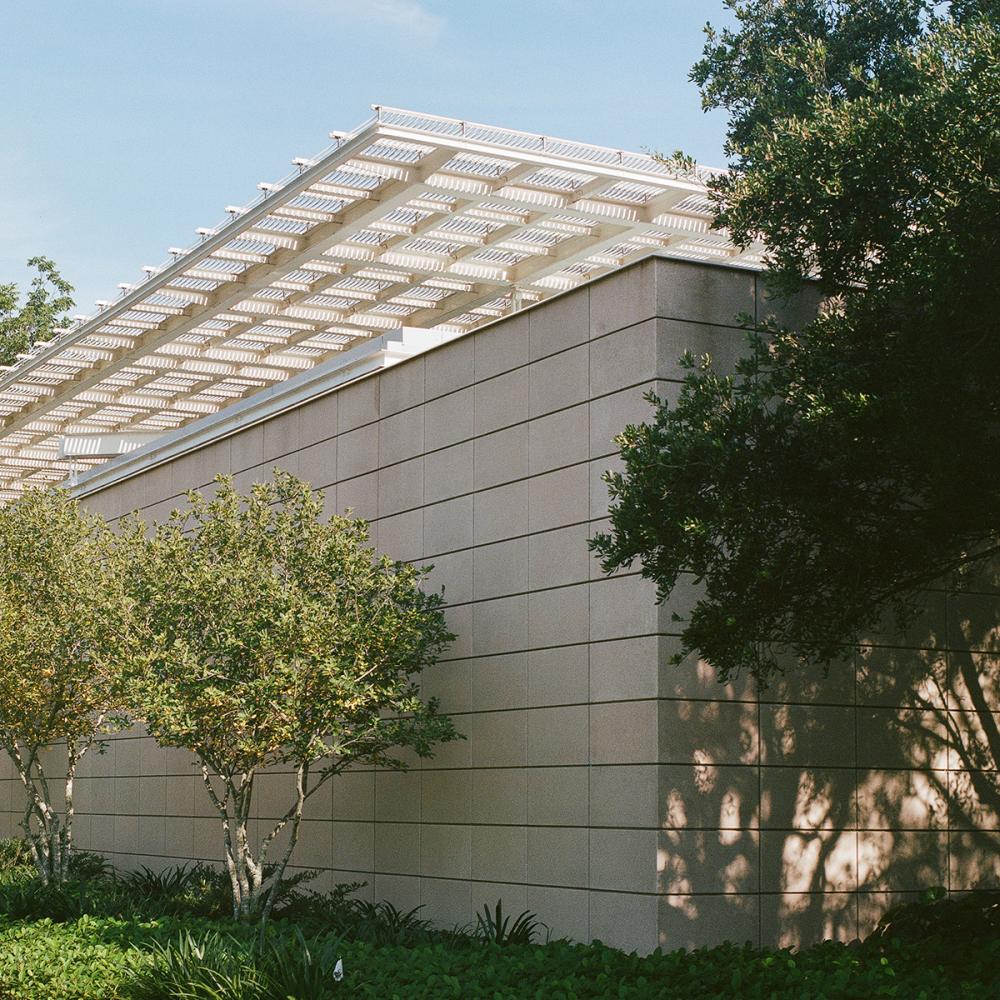 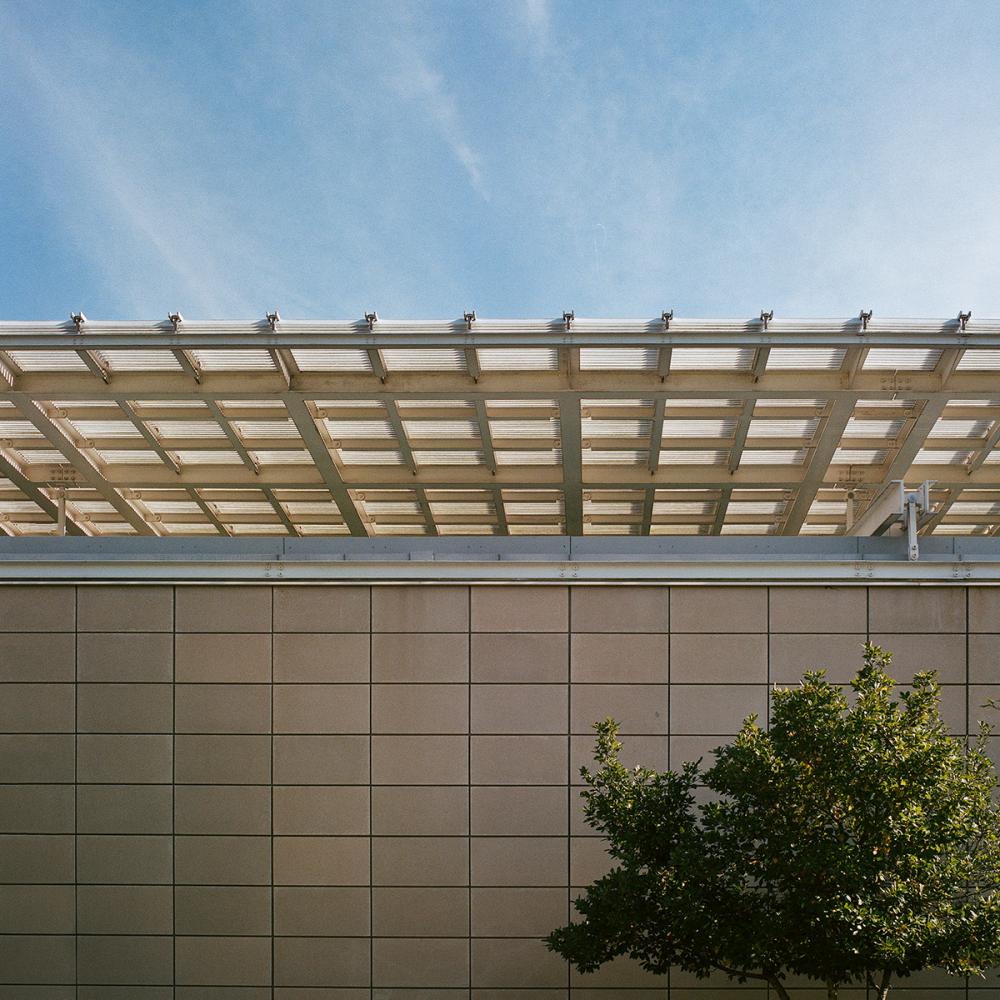 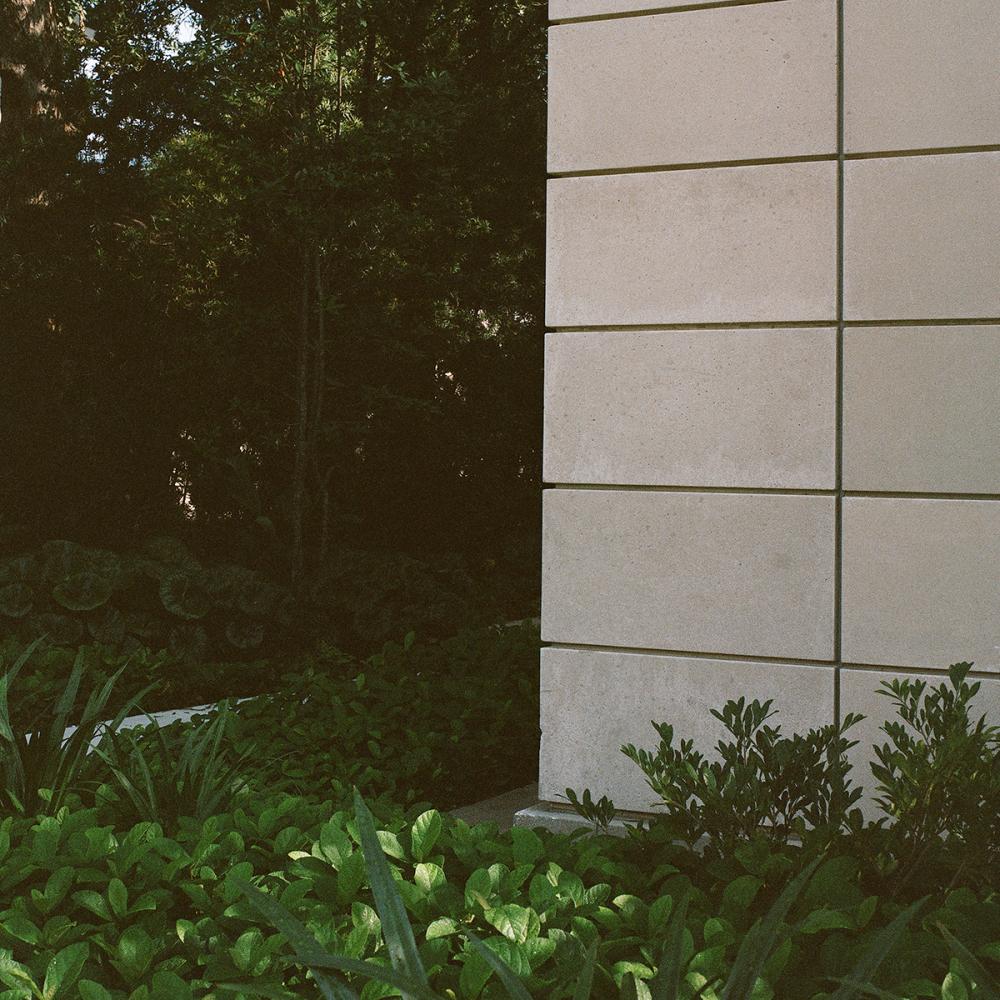 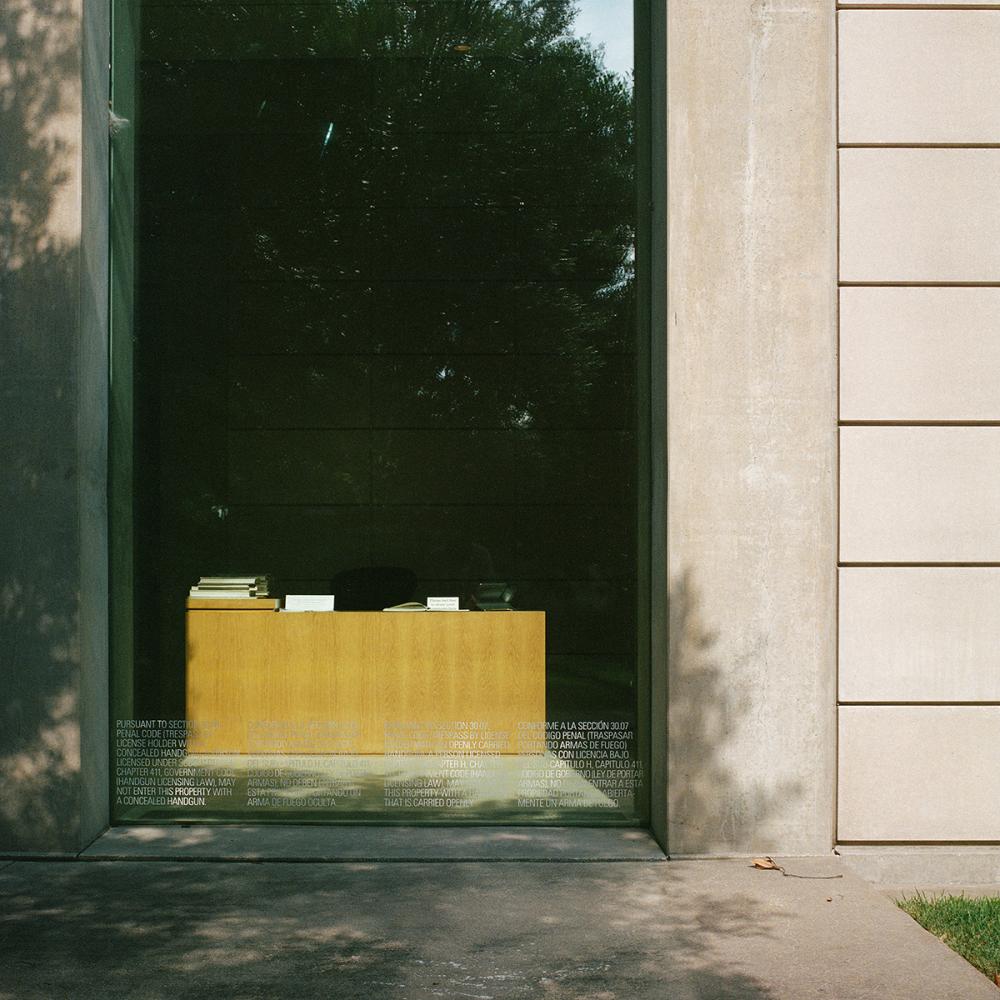 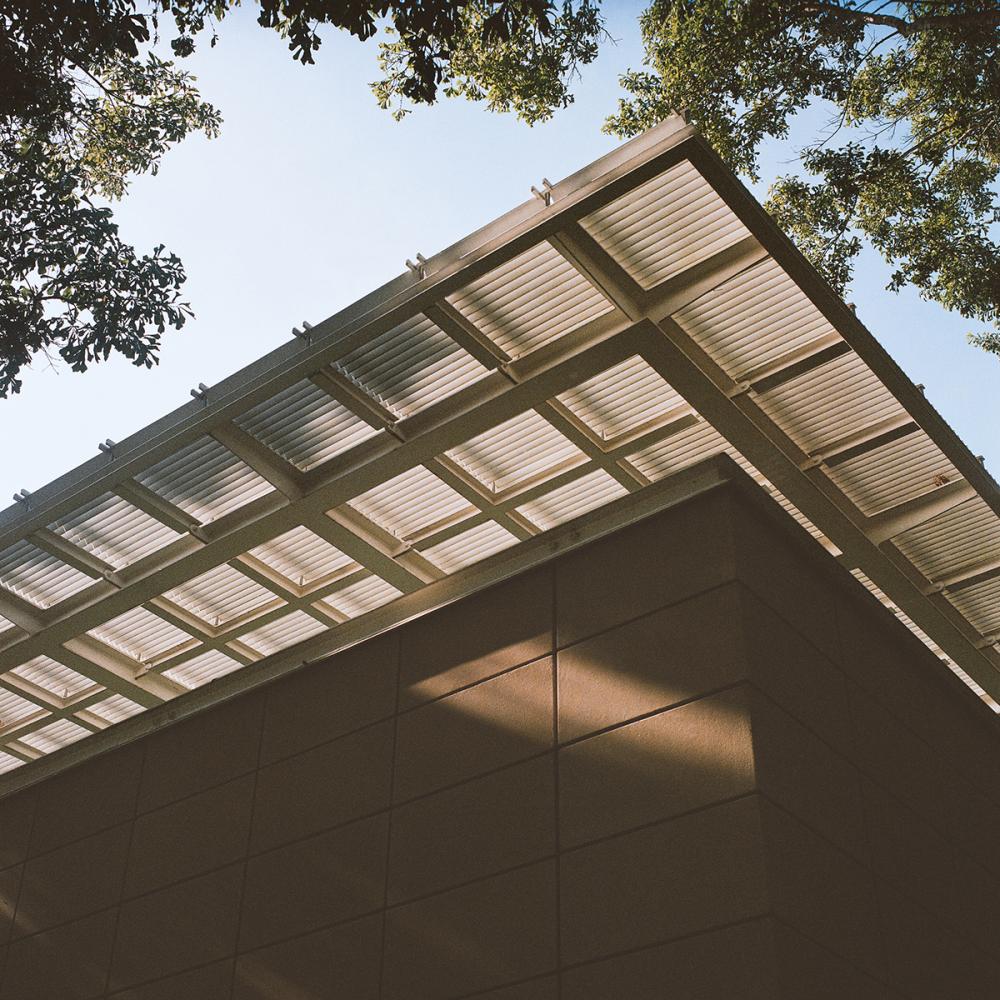 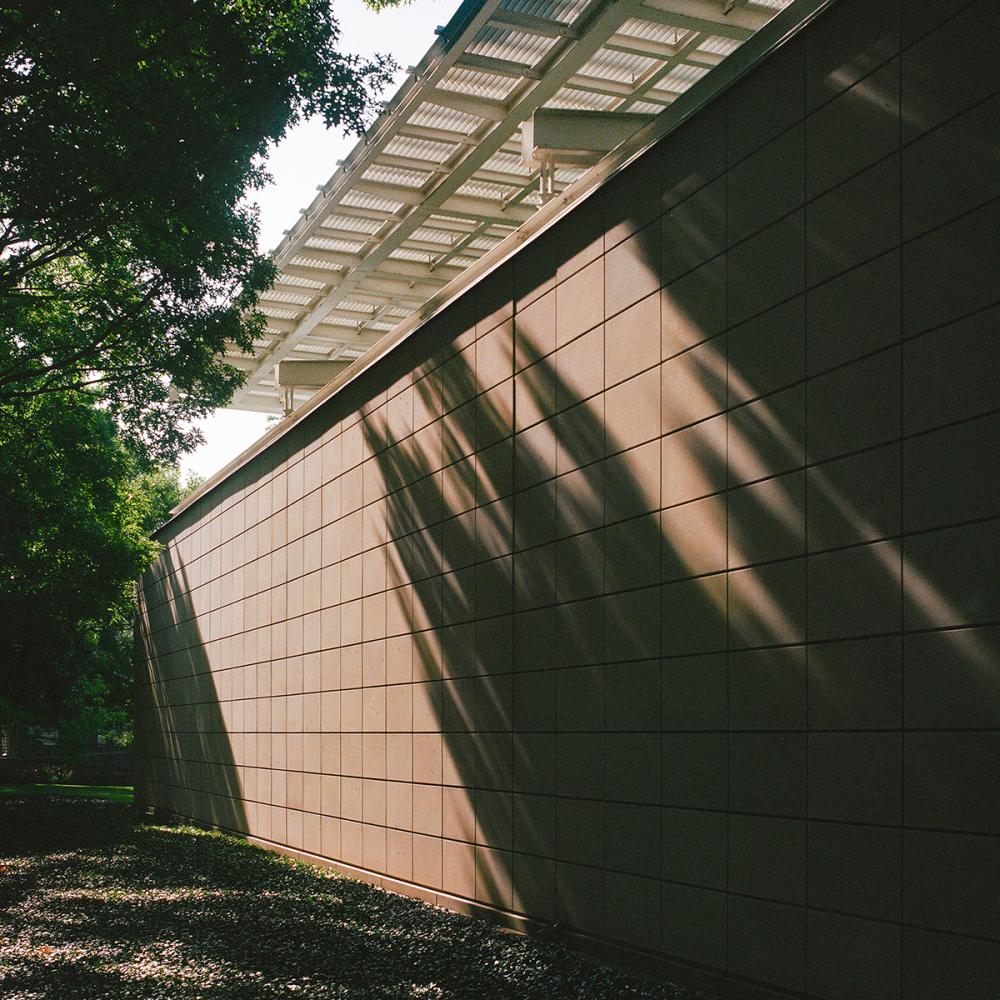 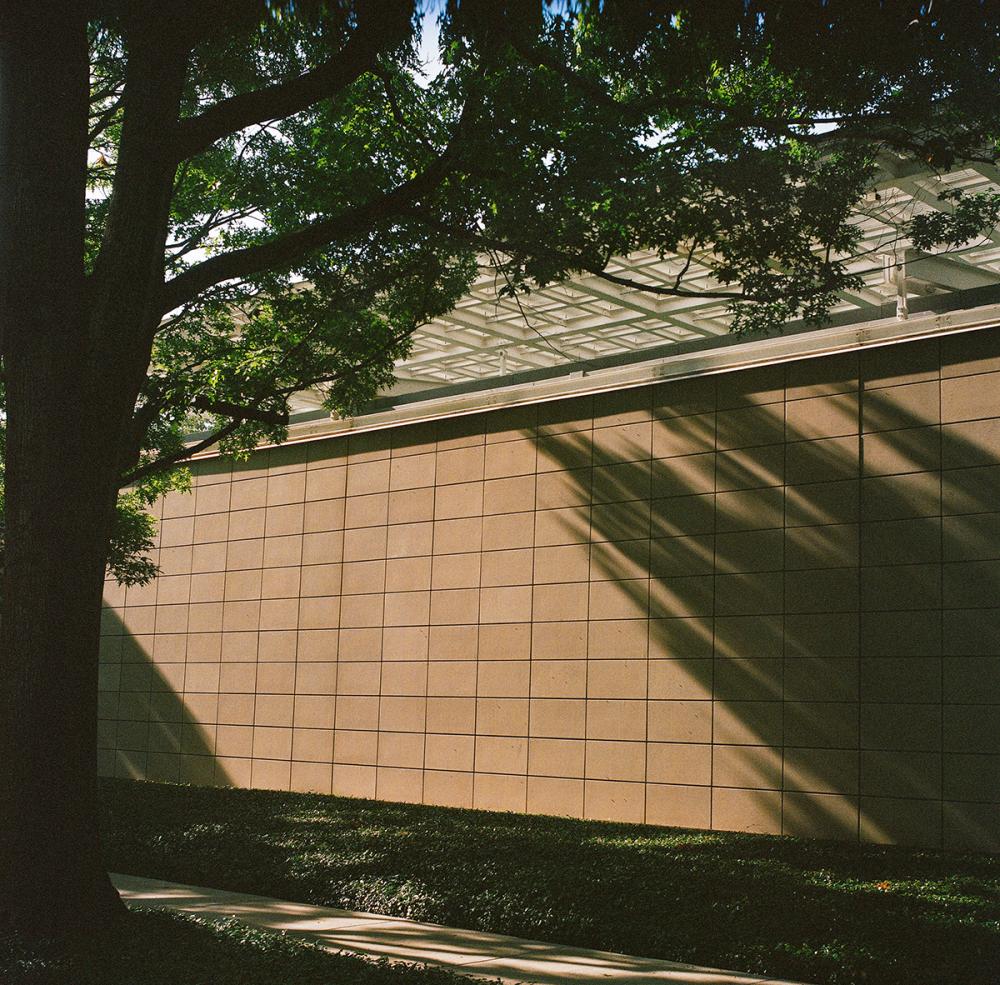 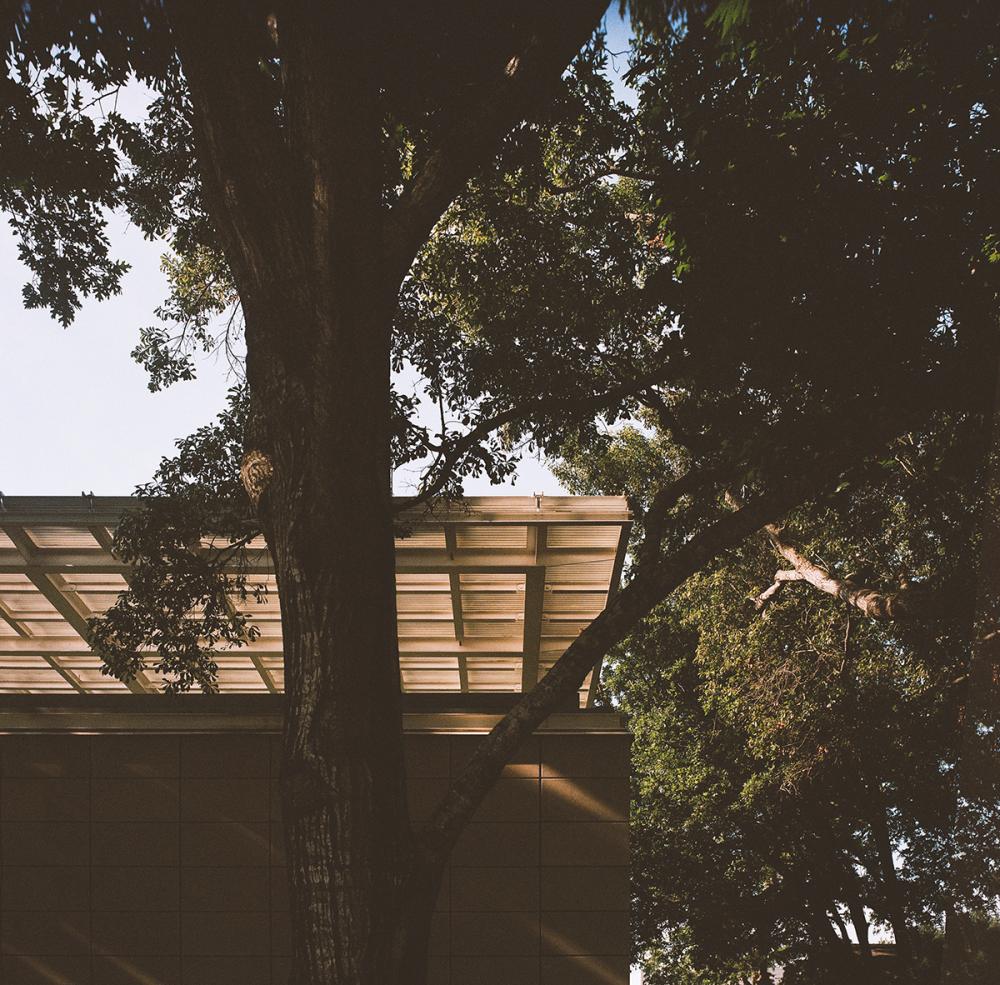 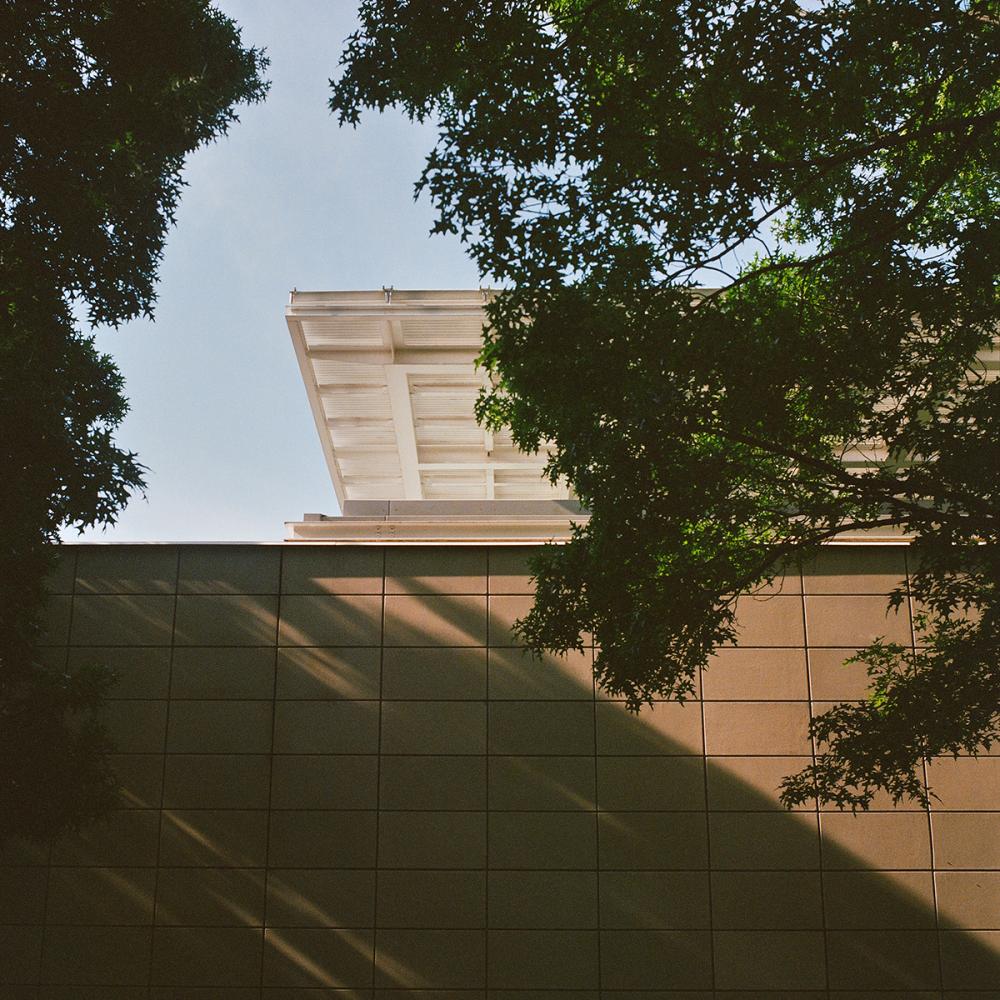 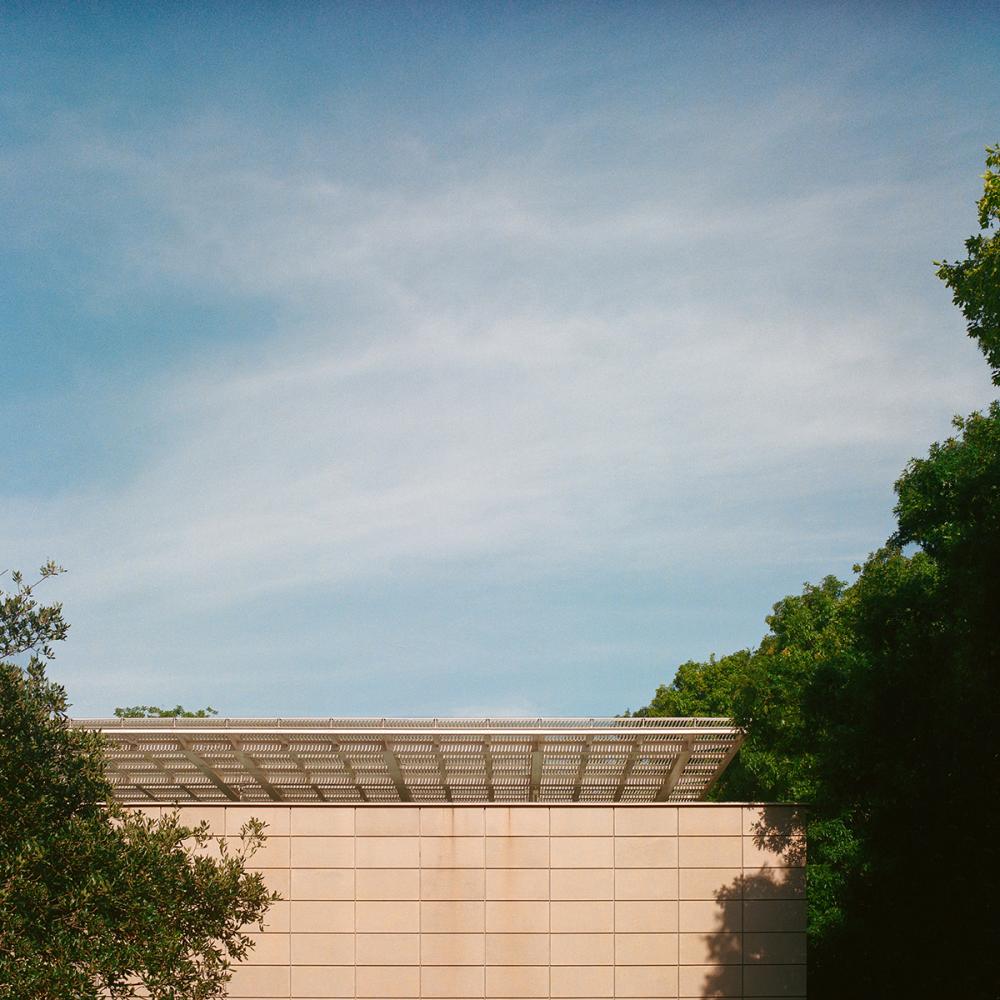 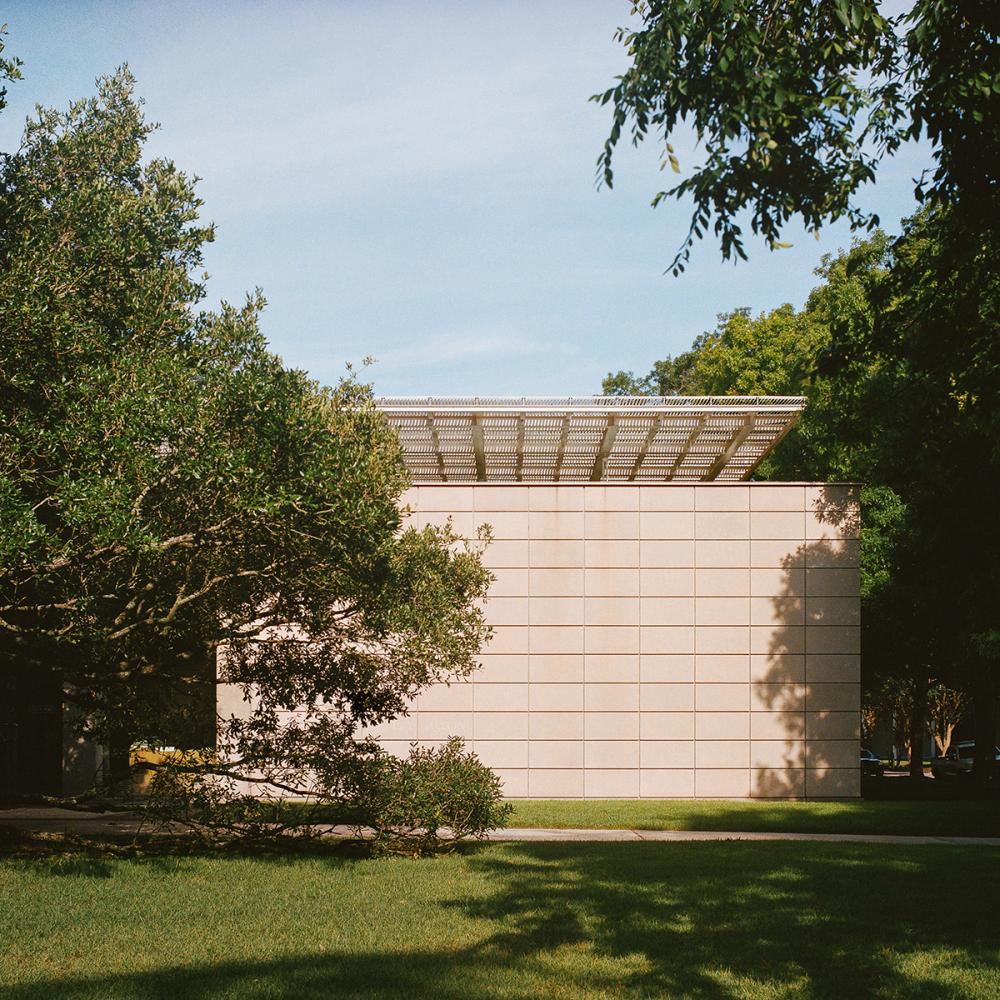 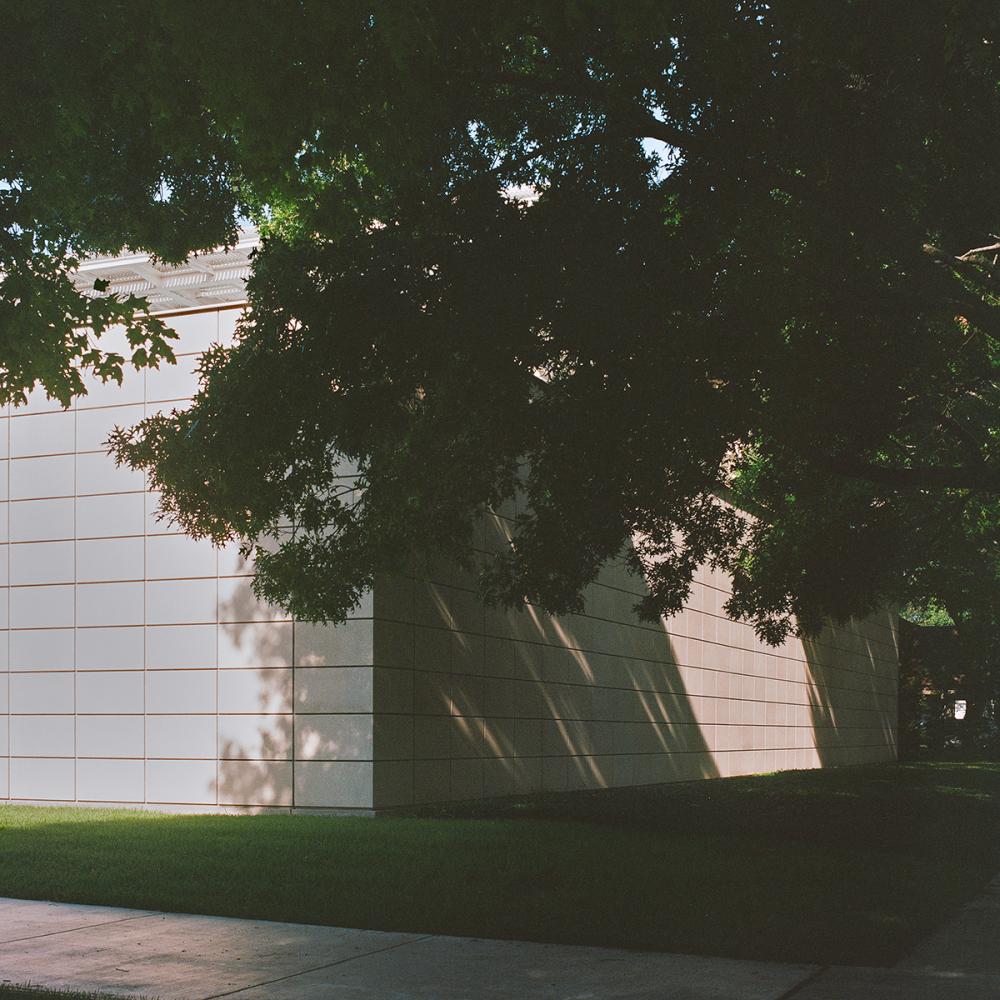 The Twombly Gallery, located across the street from the Menil on Branard, strategically aligns with the 1920s bungalows to either side. Unlike the bungalows, with their eccentrically articulated gabled front porches, the gallery turns a blank wall to the street, its entrance rotated 90 degrees to the east, facing onto a grassy plaza anchored by a single mature live oak. Like the siting of the Rothko Chapel, a block down the street, this maneuver effectively mitigates the formal impact of the entrance. By establishing the movement from street to building entrance through the private space of a pocket park, the experience becomes relaxed and intimate. As the termination of Mulberry Street, this space is also linked to the two open spaces on either side of Mulberry, enhancing the parklike setting of the museum buildings, both the Rothko Chapel and the Twombly Gallery are monumental masonry buildings, barely penetrated by windows or doors, bin because the formal relationship to the street is played down, their mass does not disturb the delicate and informal fabric of the residential neighborhood. Although the Twombly Gallery displaced one small house (which was moved intact to an empty lot a few houses east on Branard), this late-20th-century building is perfectly at home with the Craftsman bungalows, not through architectural style but through compatible scale and thoughtful site relationships.

The conceptual plan of the Twombly Gallery that originated from the sketch drawn by Cy Twombly during the early planning discussions shows a rectangular block containing five connected galleries. Piano significantly elaborated Twombly's concept by laying out galleries within a plan based on a nine-square grid, adding at one end of the building block a narrower rectangular volume for the entry vestibule. Where the foyer of the Rothko is substantially closed, the foyer of the Twombly Gallery, like that of the Menil Collection, opens to the outside through a wall of glass and glass doors framed by a poured-concrete portal. On the opposite side of the building, the required second means of egress has been treated like the entrance, opening through an identically framed glass wall to the outside. The foyer itself occupies the center bay along the three-bay width, with an archive room on one side and a service area and stair to the basement mechanical rooms on the other. The vestibule might be compared to the porch of a Greek or Roman temple, framed by a tripartite portal with perfectly proportioned poured-concrete columns and lintel standing in for an ordered Classical structure. Although born and raised in Virginia, Twombly has spent the last 40 years in Italy, and many of his paintings make reference to the ancient world. Italian architect Renzo Piano has subtly incorporated references to that world into the building, respecting as well the intentions behind the Twombly sketch that generated the plan.

The entry foyer leads to eight separate galleries laid out within the geometry of the nine-square grid. Taking advantage of the multiple combinations inherent in that geometry, Piano designed one of the outer galleries as a double square to accommodate larger and longer paintings. All of the galleries save the center one open on two sides to adjacent galleries, allowing uninterrupted circulation in either direction. Portal openings between galleries align but arc not necessarily centered, creating variations in wall lengths to accommodate paintings of different horizontal dimensions. In the middle gallery facing west, on the opposite side from the foyer, the space is brightly illuminated through windows and glass doors, producing a sensation so dramatic that in moving into this gallery it is as if one has actually stepped outside. This transitional space compares to the Menil Collection, where one is constantly brought to the outside. And like the Menil, the logic of the plan and the clear sequence of spaces provides for an easily perceived path between galleries, with subtle variations giving each a slightly different spatial quality.

Working with a single-artist gallery, Piano was confronted with an even more specific program of natural light for the design of the Twombly Gallery. To achieve the appropriate levels and desired quality of light, the architect designed a roof system that filters light in stages through four screens placed over the outer galleries, with opaque flat roofs covering the center gallery and the entry vestibule. The uppermost layer of this intriguing filtration system is manifested on the outside by a bright white steel canopy, supporting a mesh of fixed aluminum louvers, that appears to float over the building mass. While lighter and more delicate, the light-filtering louvered canopy makes friendly reference to the white concrete baffles of the Menil Collection across the street. But unlike the Menil, where the curved baffles arc exposed beneath the skylights, the louvered canopy of the Twombly Gallery is intentionally obscured on the inside. Beneath the canopy, a double-glazed, clear-glass hipped roof seals the interior from the outside elements. Barely visible from the outside, the glass roof has a nickel coating to filter ultraviolet light in the range most harmful to art objects. Beneath the glass roof and inside the building, operable louvers supported by a steel frame provide the third layer of protection. Mechanically controlled and operated with a light-sensitive photoelectric cell, the louvers automatically adjust their apertures according to changes in daylight. Directly below the mechanically controlled louvers, a stretched cotton scrim fabricated by a Galveston sailmaker forms a ceiling and provides the final layer of Piano's light-filtering sandwich. For night lighting, custom-designed fixtures attached to light tracks suspended from the steel frame discreetly poke through the cloth.

This technological tour de force produces light virtually without shadow, a condition so rarely experienced that the initial sensation is a kind of dizziness. The perfectly even natural light is different from the Menil's light, which varies subtly, or the Rothko's, which changes in intensity from top to bottom. As light filters through the sailcloth it takes on a warm tonality, filling the space with a lantern-like glow that quietly varies when outside conditions shift from clear to cloudy. The light softly reflects from the crisp plaster walls, providing near perfect illumination tor Twombly's paintings, particularly those with pale backgrounds and intricate markings that weave in and out of the surface. These paintings, subtle in content and delicately expressed, are seen at their best in the airy, shadowless light that filters into the galleries. Appropriately, paintings more vibrant in color and thicker in surface are displayed in the gallery on the opposite side of the entrance, where filtered light is mixed with daylight corning through windows and doors. Only the center gallery and the archive room next to the entrance, both intended for the display of more delicate works on paper, receive no daylight. Selected galleries in the Menil Collection are also closed to outside light and provided with controlled, often dramatic, artificial lighting. It is no exaggeration to claim that the lighting of the Twombly Gallery, particularly under natural conditions, is as beautiful and unusual as can be hoped for in any space intended for the exhibition of art.