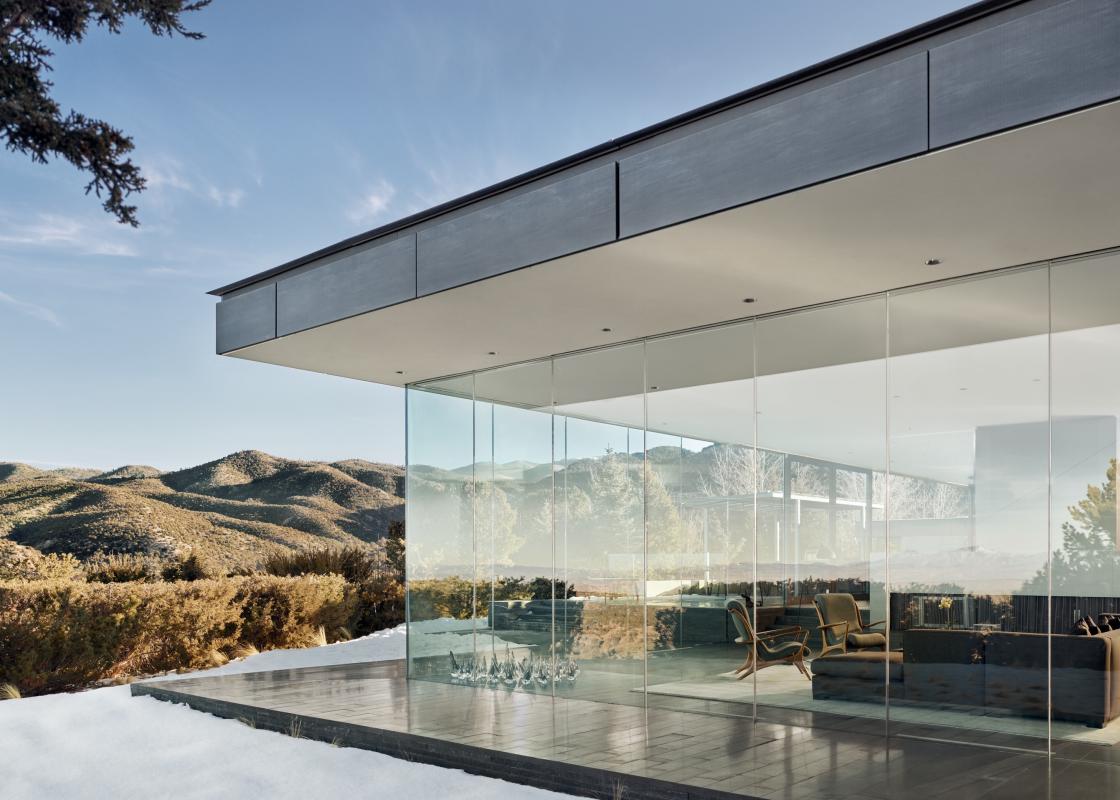 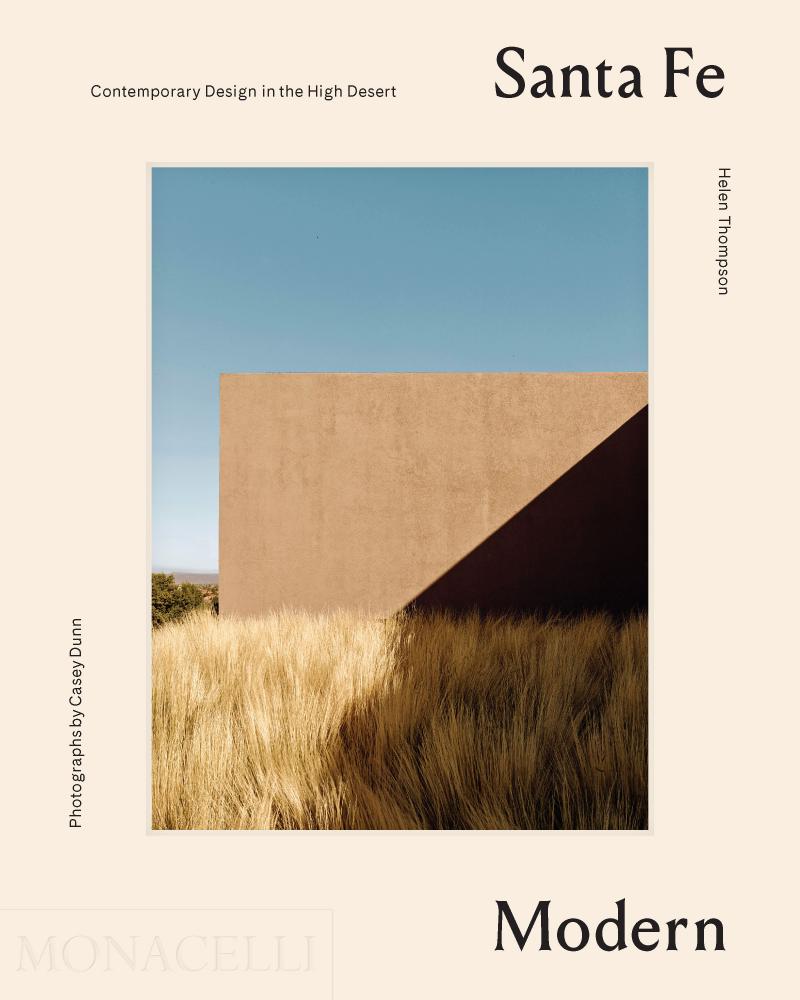 This article is an excerpt from the introduction to Santa Fe Modern: Contemporary Design in the High Desert by Helen Thompson with photographs by Casey Dunn, published by Monacelli on November 9, 2021.

The past is supreme in New Mexico. It defines everything, even modern architecture, which has become relevant here in recent decades. Modernism has its antecedents in pre-Columbian building traditions that thrived in a 130,000 square mile swath of the American Southwest. Efficient and—in hindsight—elegant, these square or rectangular volumes were plainly fundamental, built of earthy materials such as mud and straw or stone. Sometimes they were carved into canyon walls. The cube-like structures radiate unity—linked either by a minimalist anatomy or arranged in clusters—evoking domesticity, community, and a reverence for the environment, both earthly and celestial. Their purpose was straightforward: To house, to connect, and to protect.

I’m using the term “past” to refer to the distant reaches of time from about 900 to 1350 CE when the Ancestral Puebloan culture prospered. Hundreds of communities in Colorado, New Mexico, Utah, Nevada, and Arizona comprised a complex network that was connected by a system of roads and way stations. The stone dwellings still exist and are part of the largest collection of indigenous architecture in the United States. Now protected inside national parks, these dwellings can be found in the Chaco Culture National Historical Park, Mesa Verde National Park, Bandelier National Monument, Hovenweep National Monument, and Canyon de Chelly National Monument. …

But the ancient architecture was also a casualty, its mein too unassuming to withstand the onslaught of statement-making building traditions of Greco-Roman cultures. Classical-based architecture bristled with aspiration—order and symmetry celebrated civic, political, and military ideals, a message that co-opted the creative imagination of the fledgling United States. As for prototypical site-specific and culture-specific dwellings—their significance for the architectural lineage of the Americas was blotted out for centuries.

Everywhere, that is, except New Mexico. Rather than being marginalized, the pueblo style has been canonized. Characterized by thick adobe walls of earth, water, and straw it embodies the popular conception of Santa Fe architectural style. Pink, tan, or brown adobe dwellings are cozily at home in this high desert setting. 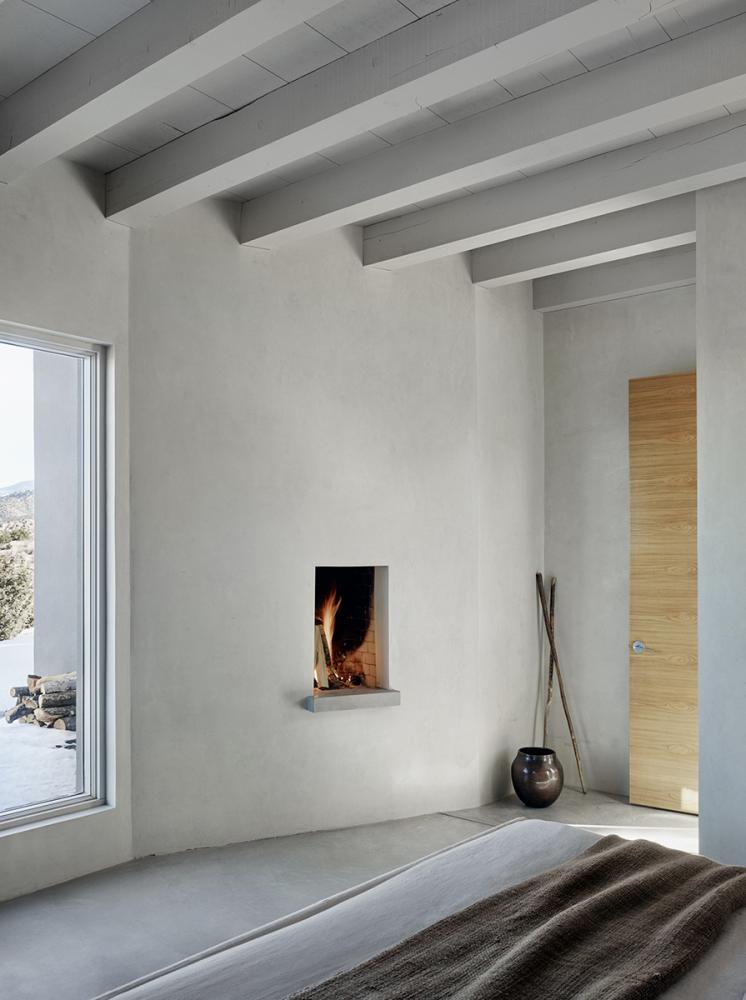 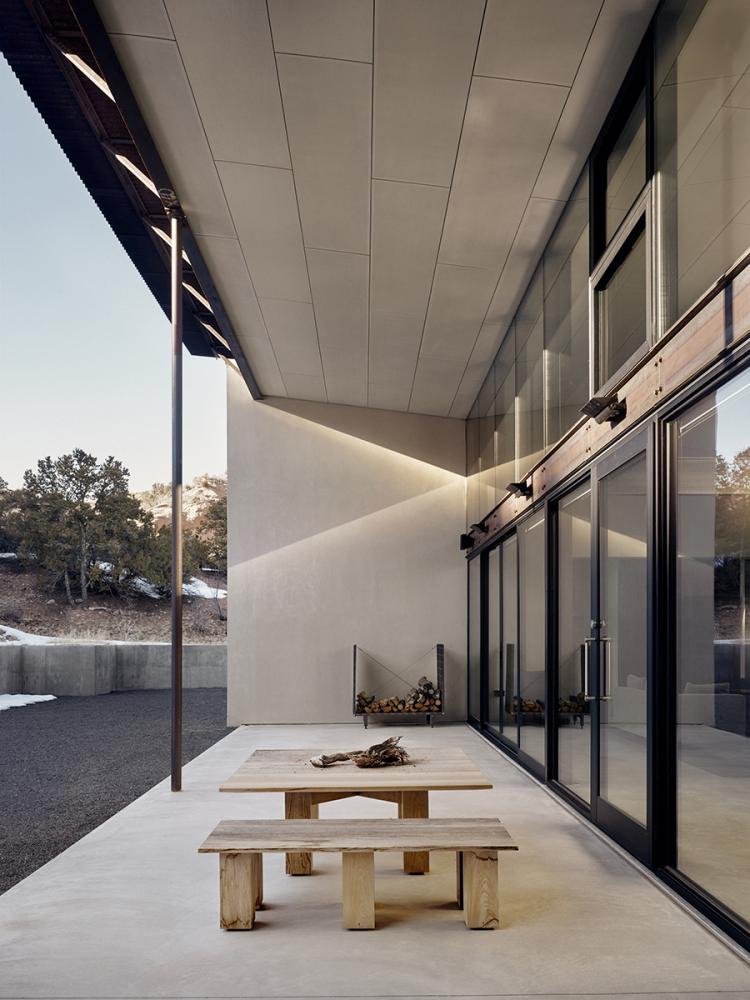 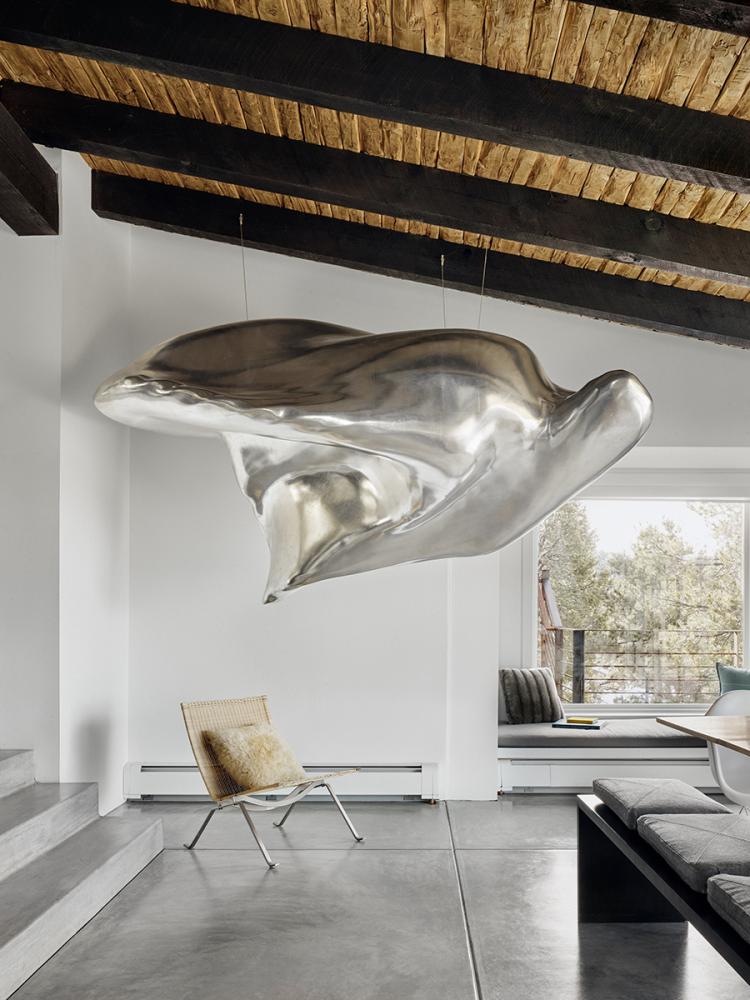 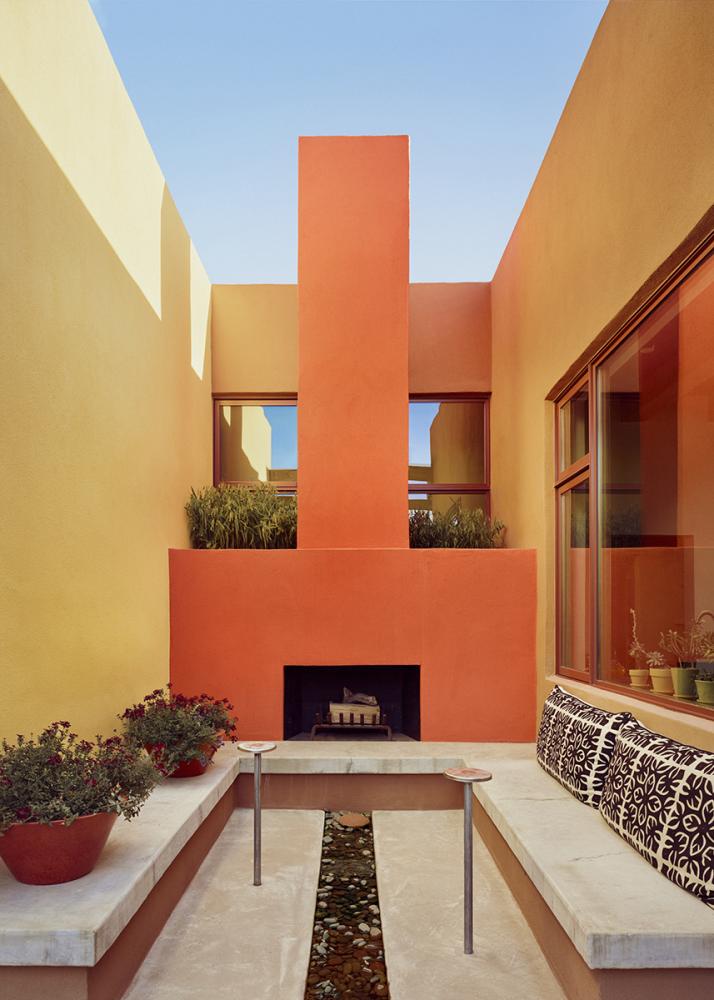 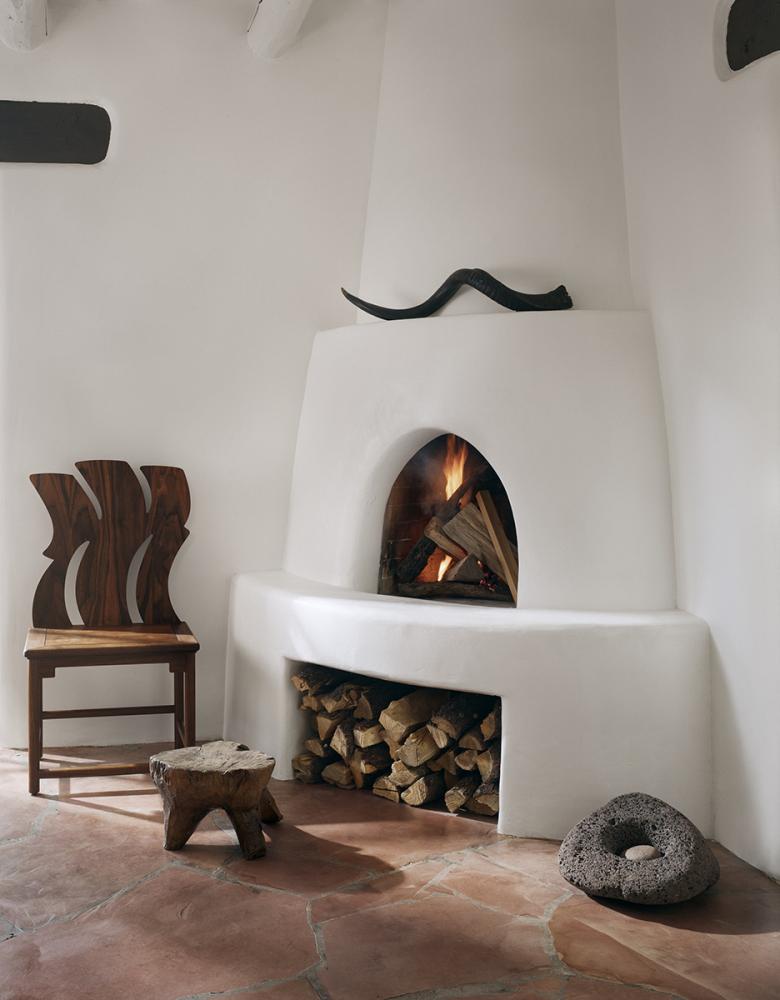 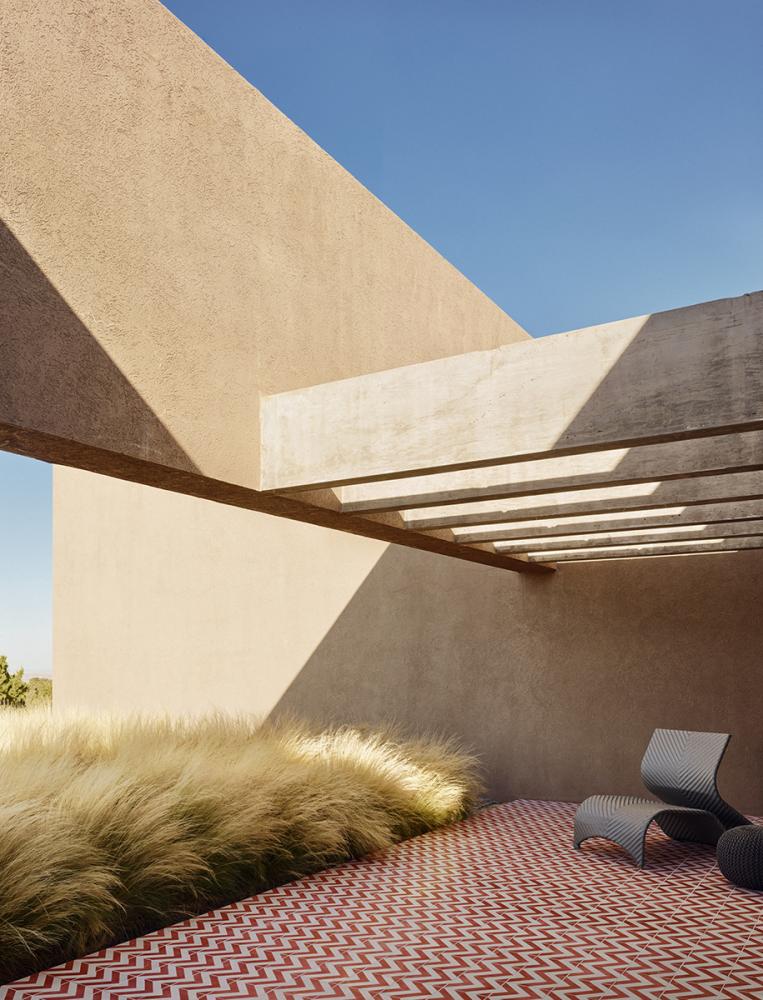 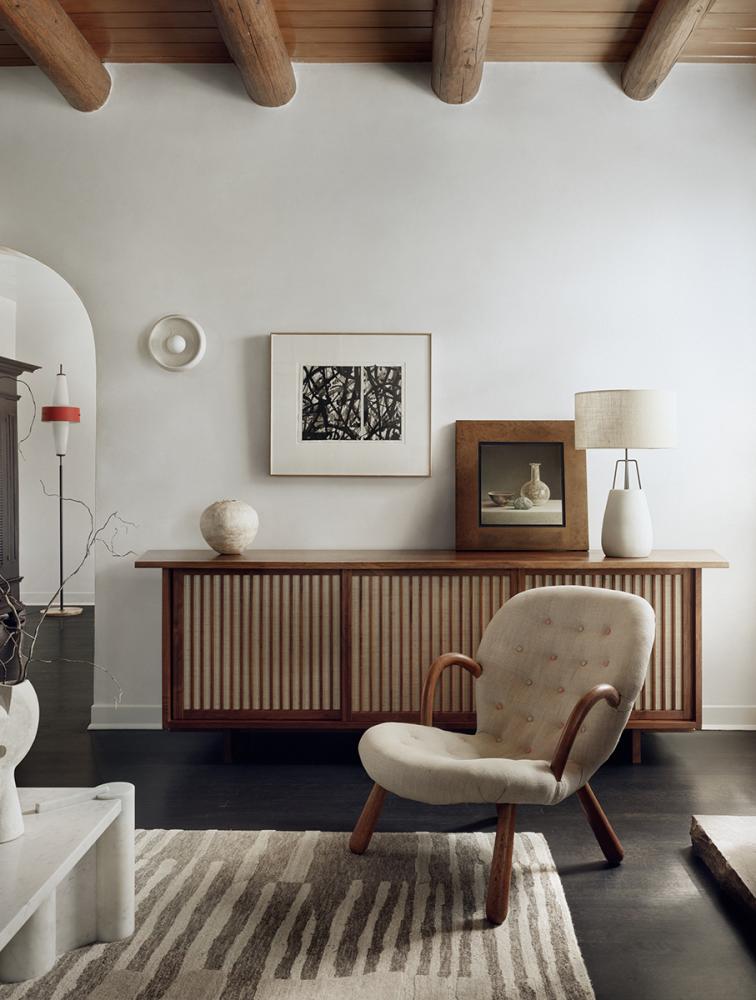 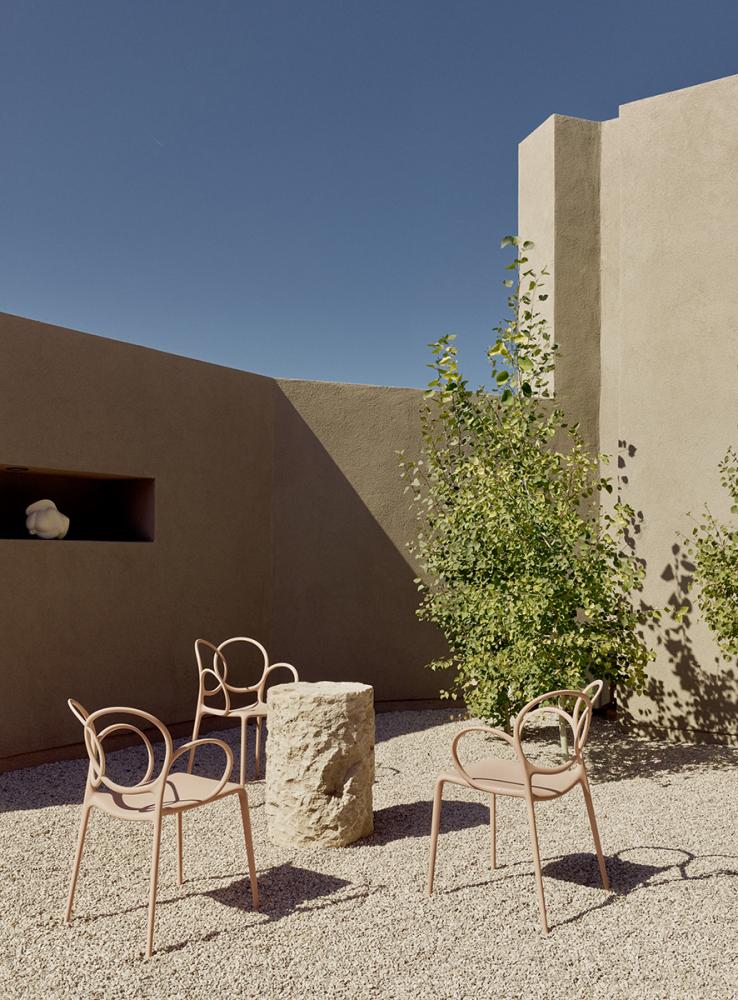 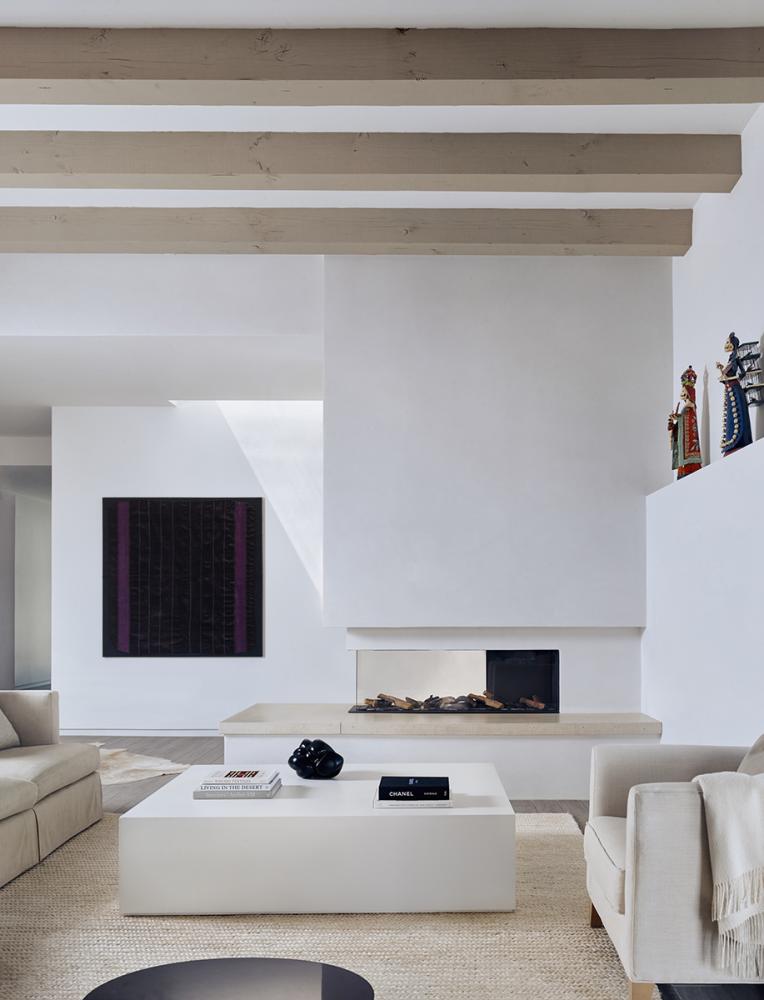 The territory of New Mexico became a state in 1912 and was still considered exotic when arts patron Mabel Dodge Luhan settled in Taos in 1917. New Mexico Modernism today is the aesthetic descendant of a community of iconoclastic artists who made their way to the state at her invitation. Those artists included Marsden Hartley, John Marin, Stuart Davis, and Georgia O’Keeffe. … They were radical artists who also understood that the New Mexico terrain invited fresh Modernist interpretations that, particularly in Georgia O’Keeffe’s work, inspired a framework for an exploration of color and shape. … In 1940 the artist bought Ghost Ranch after living in it for a few years; she purchased the house in Abiquiu in 1945. … O’Keeffe gently renovated Ghost Ranch by removing a small double-hung window in her studio and replacing it with a six-paned picture window that admitted north light; she also streamlined the north side of the house by eliminating the ends of the support beams (called vigas) as well as the downspouts, or canales. In her bedroom two picture windows butt together at the corner, suggesting mitering, a strategy modernist architects such as Frank Lloyd Wright employed to allow unobstructed views. … The Abiquiu house is even sparer: a humble twin bed draped in white linens seems monastic. On the ledge above the bed, rocks and seashells are a distillation of the artist’s instinct for form and contour. With these modest gestures modernist interior design and architecture quietly made their way into New Mexico.

Helen Thompson is a nationally known writer on interior design and architecture. Formerly a food writer and editor for Texas Monthly, she was the Texas city editor for Metropolitan Home and has written and produced articles for Elle Decor, Architectural Digest, House Beautiful, Martha Stewart Living, Western Interiors, Traditional Home, and Veranda. She is also the author of Marfa Modern and Texas Made, Texas Modern and a contributor to Hocker 2005-2020 Landscapes, all Monacelli titles, as well as The Big Texas Steakhouse Cookbook, and The Mansion on Turtle Creek Cookbook. She lives in Santa Fe.

Casey Dunn is an Austin-based architectural and landscape photographer whose work has appeared in Dwell, the New York Times Magazine, Interior Design, Architectural Digest, Architectural Record, and Paper City Magazine. He is the photographer for Marfa Modern, Texas Made, Texas Modern, and Oasis (Potter, 2020).

Use the discount code PHAIDON20 for 20% off when purchasing the book on Phaidon’s website.