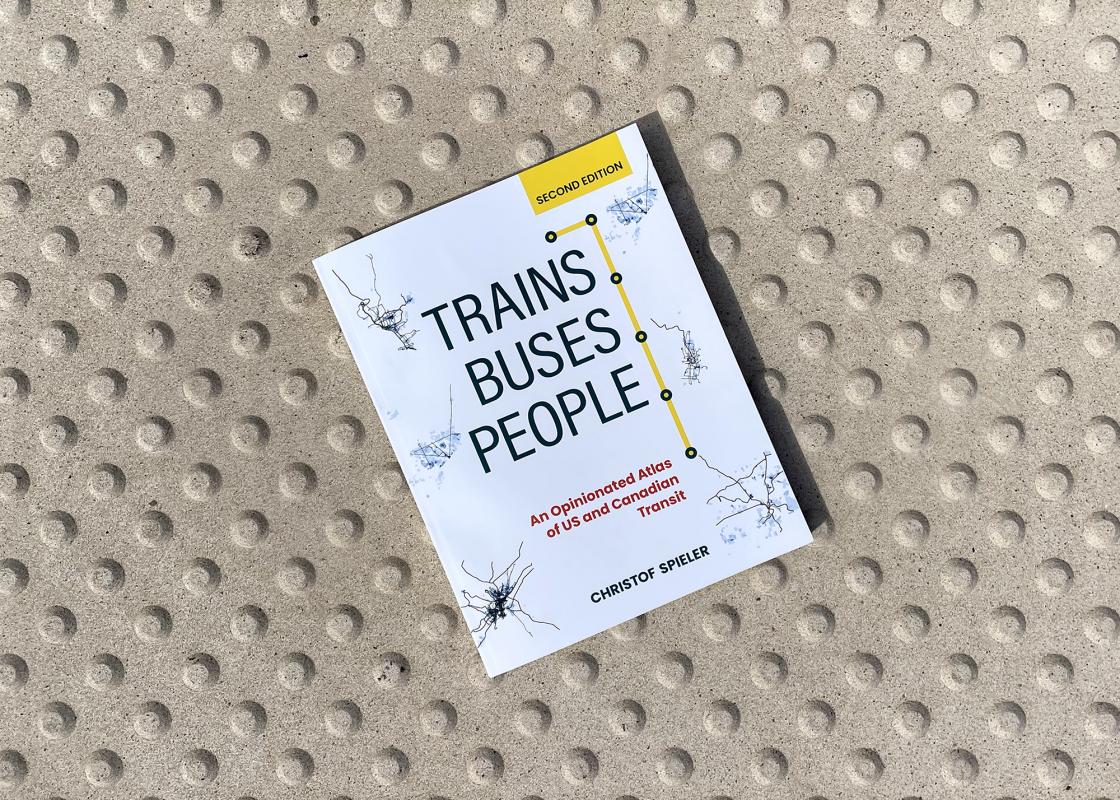 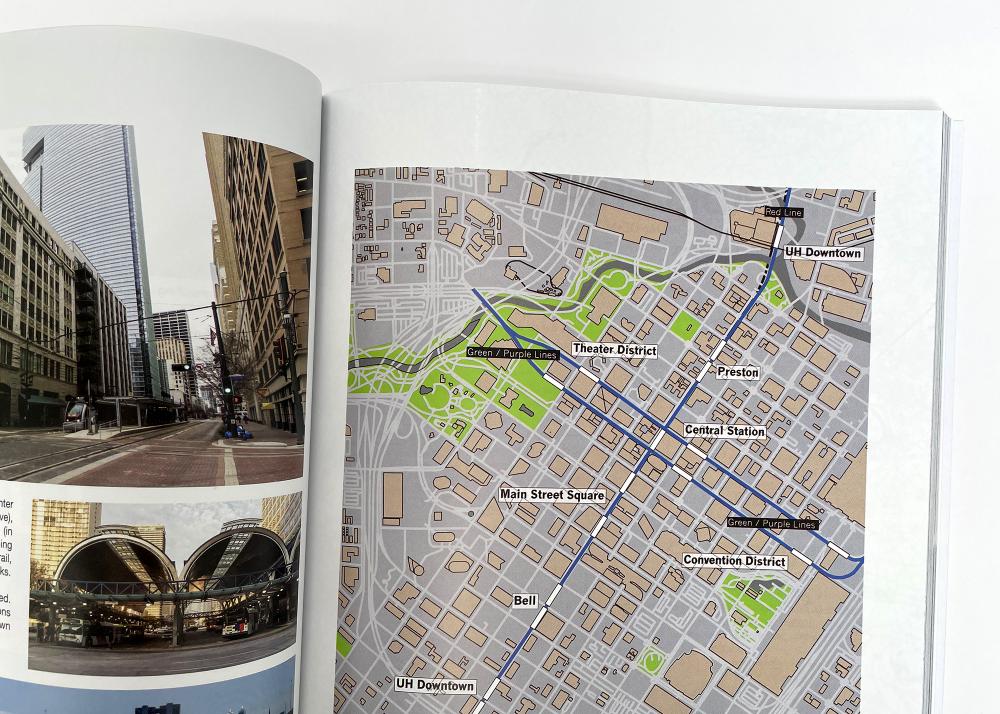 America is, by no means, a nation of public transit riders. About five percent of U.S. commuters use transit—like light rail, buses, or subways—to get to work, according to Census figures from 2017. That reality reflects the culture. Our screens are clogged with ads for cars, not public transit, and when a character ends up on a bus or train in film, it’s often a place of paralysis or purgatory, while the open road suggests freedom. If you were a visitor exploring most parts of the U.S. today, you’d think us to be a country filled with people driving alone.

But this is not the impression that one gets while reading Christof Spieler’s Trains, Buses, People. Or one that Spieler would have you believe.

In the first edition of this book, published in 2018, Spieler analyzed the forty-seven metropolitan regions in America which had rail transit or Bus Rapid Transit (BRT), a form of express bus service first popularized in Curitiba, Brazil. In what feels long overdue, Spieler showed that more American cities were joining age-old systems—like the New York City subway and Chicago’s L—in successfully funding and developing serious networks. This didn’t happen overnight, of course, and these systems are nowhere near perfect; that’s where the book’s subtitle—An Opinionated Atlas—comes into play. (More on that shortly.) 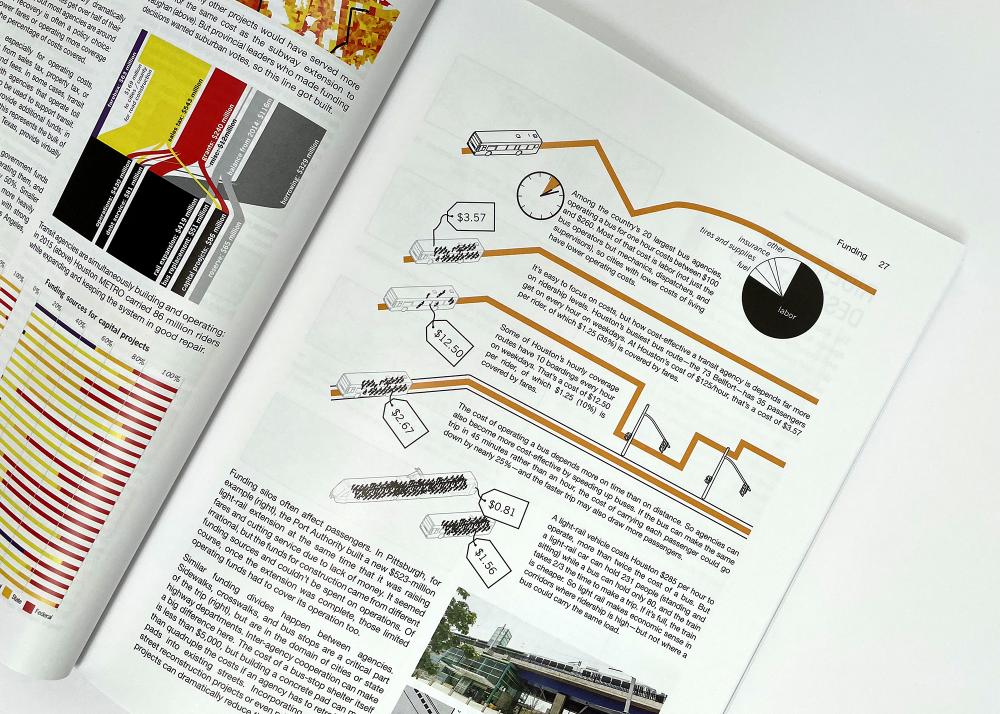 At the turn of the 19th century, America was a leader in transit construction, having built significant systems in what were then key cities: New York, Chicago, Boston, Philadelphia. But by mid-century, it began to fall behind the rest of the developed world, instead focusing its efforts on highways. The richest country in the world entered the new millennium with no high-speed rail and badly outdated transit infrastructure.

But now the U.S. may be in the midst of an urban transit revival. More cities are contending with influxes of urban dwellers who, unsurprisingly, want public transit that works, especially as a climate reckoning places increased urgency on ditching cars. It may not be the U-Bahn, but the response has been to take public transit more seriously, through new spending measures and miles of service.

Spieler’s book quickly became a seminal tome for transit agencies and planners everywhere, likely to be found on bookshelves next to route maps and redesign schematics. And it rode a wave of momentum, with cities—especially small and mid-sized metropolises—exploding in size.

The new second edition of Spieler’s atlas, released in August, feels like it arrived in a different century than the first one. (Both editions are published by Island Press; a separate accompanying website provides supplemental information.) The pandemic devastated municipal finances and viscerally called into question the validity of the 9-to-5 model, a key flaw of American transit planning. The timing of this book couldn’t be more appropriate, as today the country’s transportation faces multiple existential reckonings—of equity and sustainability, namely—but also potential rebirth: Washington could be (it always seems close) on the brink of unprecedented infrastructure spending; $39 billion of which would go to the local systems Spieler studied. 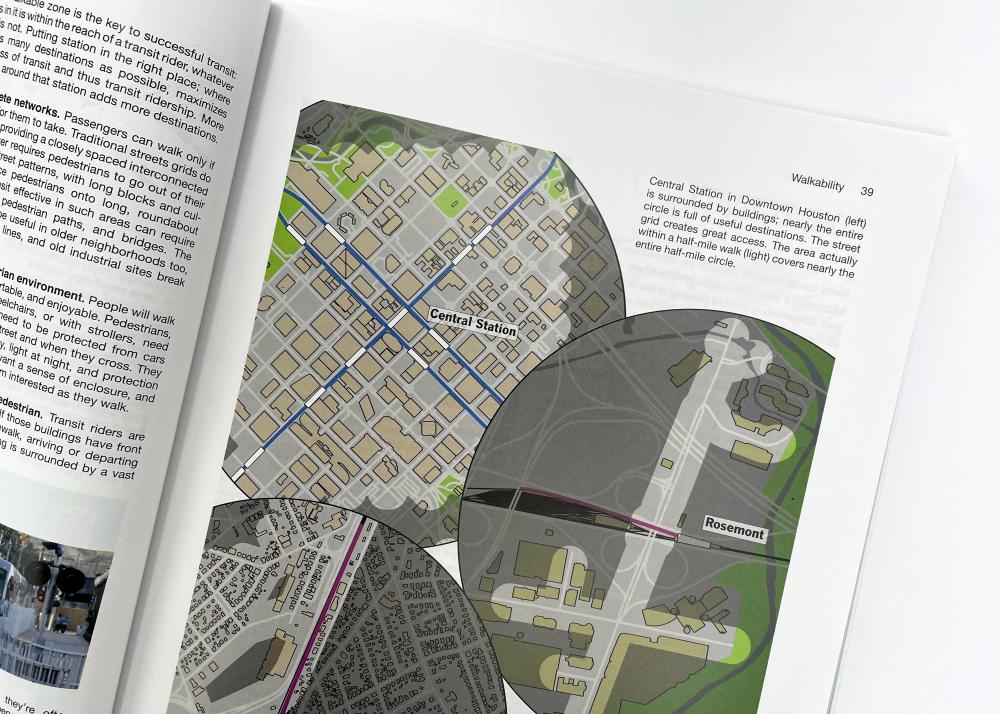 Like the first edition, Spieler’s new version reads like assigned homework to planners: how to—and how not to—build transit. He added two new American cities (Indianapolis and San Juan) as well as eight Canadian cities, bringing the total measured to fifty-seven. The comparison helps: nationally, Canada has more than double the share of residents who take public transit every day when compared to the U.S., with greater rates in its cities, even though some of them share the sprawling characteristics of American urbanity.

The book doesn’t account for other transit-adjacent undercurrents at play; the rise of “micro-mobility,” like e-scooters and e-mopeds, is notably lacking, for example, as are broader conversations around cycling. The author disclaims early on that his interest is in rail and BRT, the study of which is plenty to fill the more-than-300 pages of the atlas.

The main section of the book profiles each of the systems, with information laid out in a format that allows easy comparison. First, a map of any rail or frequent bus routes appears next to a brief summary of the city’s facets, transit history, and demands. Then, Spieler’s frank assessment. Vancouver? “The former industrial city has become a model for urban planning and one of the most diverse cities in North America.” San Juan? After explaining why Puerto Rico’s dense capital city needs good transit, Spieler retorts: “Tren Urbano [the city’s transportation agency], opened in 2004, is not that system.” 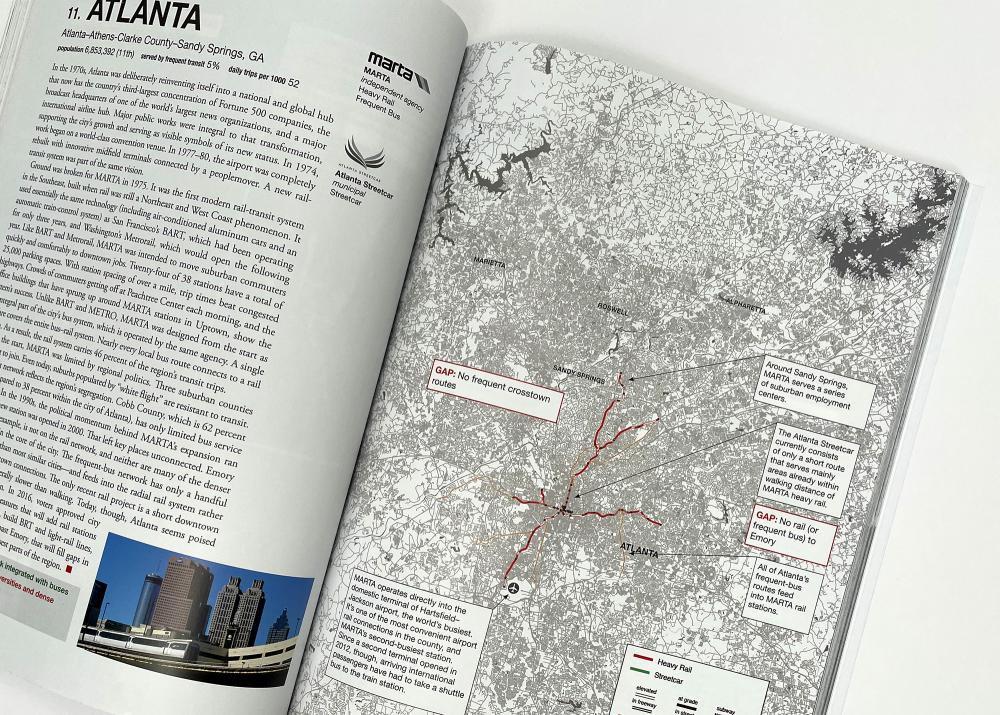 The second section tells us why these systems are successful or lackluster. Heat maps show us where people live, where major destinations (airports, universities, employment centers) are, and how close those two things are to being located within a half-mile of frequent rail or bus service. Following this visualization, Spieler’s instructions don’t seem like a tall order: rather than flashy projects like the monorail from The Simpsons—costly and with little actual utility—focus on more frequent, reliable service near where people actually are or need to go. It’s not about how many miles of track are laid, but how good that transit actually is.

Unify fares. Co-locate housing near transit. Make the ride more enjoyable. These directives form the crux of today's post-pandemic conversations to lure white-collar workers back to transit use in a world of remote work. But the implications of why that hasn’t happened yet exposes the ugly side of public transit in America: historically, systems benefit white, wealthier riders by design, intentionally bypassing the needs of poorer communities of color. Spieler doesn’t let us forget that; he dedicates a new chapter in his second edition to it that should be required reading for anyone working in transit. 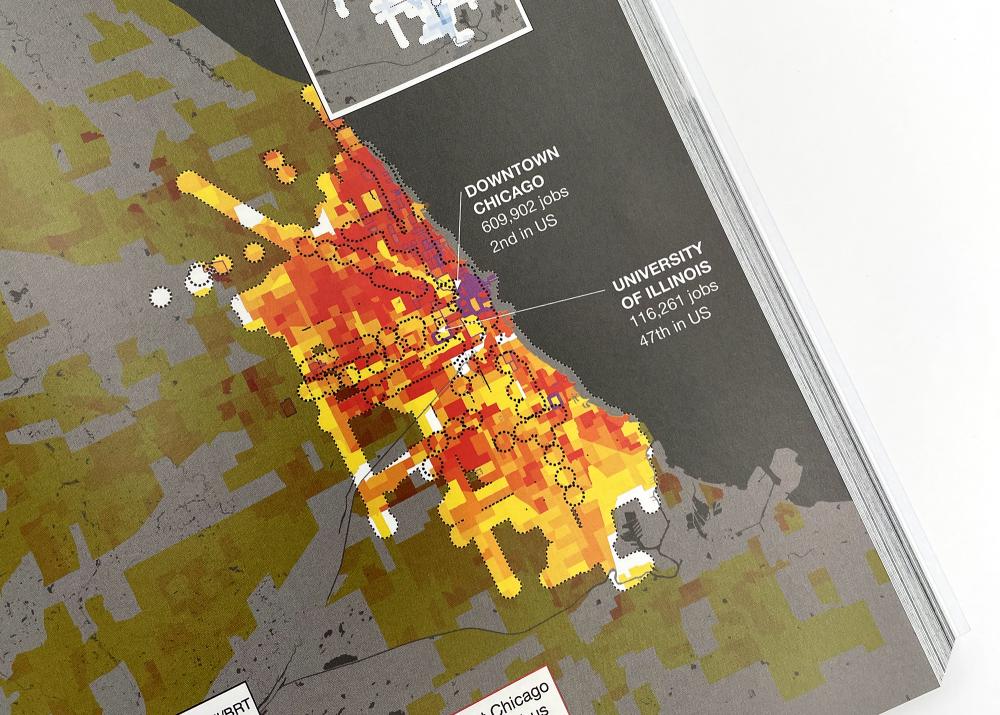 In many metropolitan areas, the subject of racial equity as it relates to transit is impossible to avoid. Spieler heralds Minneapolis-St. Paul for building “one of the best transit systems in the country.” But, as he later adds, the construction in the 1950s of I-94, like so many other highways, went through The Rondo, a vibrant Black community. Community engagement has improved since then, but “as the George Floyd murder showed, major problems with policing remain,” Spieler points out. The addition of a section on inclusivity in transit helps bring the book up to speed with contemporary conversations surrounding transit in 2021, as a new, more diverse class of planners, whose lived experience is one of social division, enters the field.

At a recent book release event hosted by Remix, a popular transit planning platform which was used to create the book’s mappings, Spieler, in conversation with Remix co-founder Tiffany Chu, shared a central belief of the book: “Better transit makes for better cities.” This is true for Houston, where Spieler is Vice President and Director of Planning at Huitt-Zollars and Senior Lecturer at Rice Architecture. (He is also a longtime contributor to Cite.) 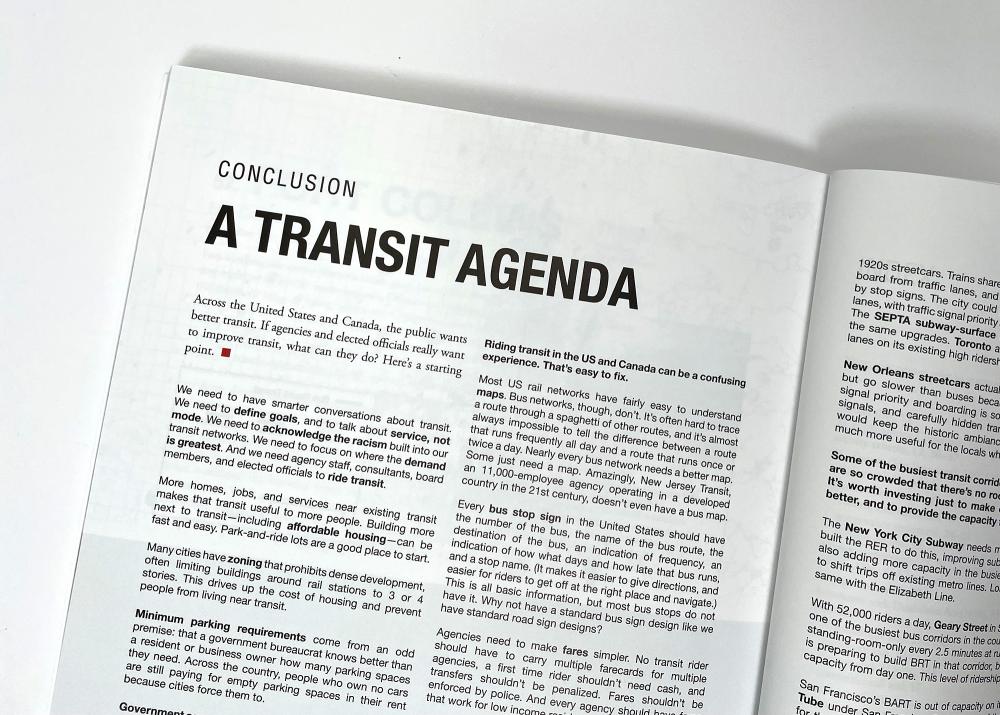 Famously, Spieler helped oversee the redesign of METRO’s bus system, which has influenced other redesigns nationwide. He and his wife moved to downtown Houston soon after the Red Line light rail opened in 2004. It’s now one of the nation’s busiest, carrying 40,000 passengers a day; Spieler is one of them. The choice, he argues, is one of liberation: when people can easily access opportunities—jobs, leisure and recreation, food and healthcare, friends and family—without the burden of an automobile, they (and cities) thrive.

Of course, America remains a nation of sprawl, and car-free mobility is still hard in most U.S. cities. This book raises one’s hopes that change is possible—or, perhaps, that this is already changing in the true American way of rugged incrementalism. Trains, Buses, People ends with a two-page “transit agenda,” which rings loudly at the start of the 2020s. Spieler shares his lessons, even against political and economic headwinds. For anyone dissatisfied with the status quo of disconnectivity, a final parting message sets the stage about the work ahead of us: “We need to have smarter conversations about transit.”

John Surico is a journalist and researcher who focuses on transportation and open space. His reporting can be found in The New York Times, Bloomberg CityLab, VICE, and elsewhere. He holds an MSc in Transport & City Planning from University College London and teaches at New York University’s Arthur L. Carter Journalism Institute.