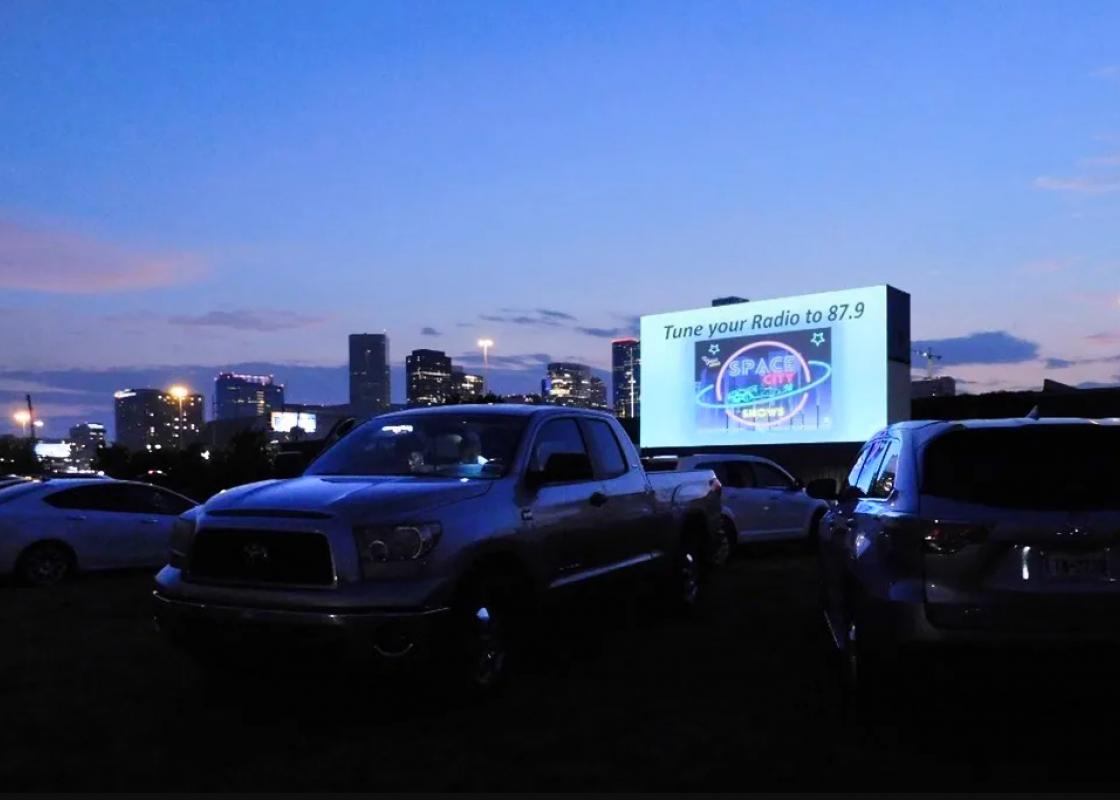 Spaced Out at the Drive-In

Out of the pandemic rubble, a crop of drive-in movie theaters has bloomed in downtown Houston, each within a few miles of the other.

Now that so many crowd-centric entertainment options are off the table due to the ongoing concerns about COVID-19, watching a movie on the big screen outdoors from within the confines of one’s car is at once social and safe.

The drive-in experience itself, especially in Houston, rests on a series of oxymorons and unusual pairings. It’s a way of being together while being separate, out in a field in the middle of downtown Houston, in front of a gargantuan glowing screen, with radio-quality sound coming in through the intimacy of car speakers. In this upside-down time, these sorts of dualities work. “The best seats,” says Khairi Sharif, owner of Space City Shows, “are the ones you bring.”

During the rise of car culture in the 1950s, drive-ins appeared at the edges of towns where there was ample space to park hundreds of cars, set up a large screen, and not bother neighbors. There were snacks that you could prop on the door of your car and, often, a double-feature. It was a place for families and sometimes dates, as seen in the popular drive-in feature Grease.

In Houston, four downtown drive-ins that popped up recently are powered by varying interests. 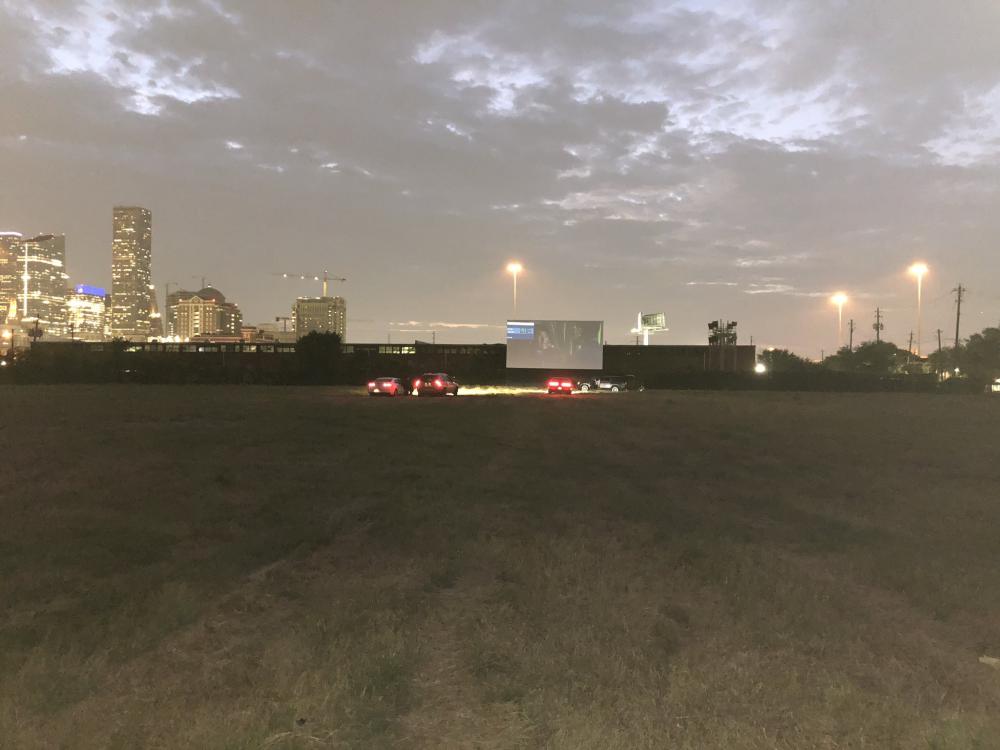 Space City Shows. Courtesy Khairi Sharif via Twitter.
Space City Shows was creatively born from pandemic adversity. Founder Khairy Sharif, 26, was working in flooring and found business was drying up due to COVID-19. After “bird-dogging” around, he found a space just east of downtown with fantastic views, a grassy lawn, and space for 200 cars. Through workplace connections, he found a contractor to build a 40’ x 20’ screen. Then, true to the “If you build it, they will come” prophecy, he quickly found an audience.

The only Black-owned drive-in in Texas, and one of the few in the country, Space City Shows begins the evening with DJ Maphy, who plays music you might hear at a family reunion or a cookout; she takes requests via social media. Sharif brings in local food trucks each week such as Houston Sauce Co., Dipping Dots, Foodie Bar, Nacho Monster, Drunken Jar, Three Sisters Cajun, Off the Leash Hot Dogs, Akari’s Candy Factory, and many others. A family party atmosphere is a welcome respite; the scene can also feel civic, as the night unfolds under a fantastic view of the downtown skyline. Sharif says people are looking for “an escape from real life, soothing is what we need; somebody might just need a hug, or hope and romance, a good laugh. We try to get all five emotions, so people leave with an experience, a memory, a vibe like no other.”

The Best Little Drive-In in Texas has a somewhat similar story. Generations AV, the company doing sound and light for several music venues and festivals in Texas, suddenly found themselves with a ton of equipment and no work once the pandemic struck. They tapped Raven Tower, a restaurant adjacent to and owned by White Oak Music Hall, as a partner with the plan to use Generations AV’s equipment for a drive-in at Raven Tower’s sloped parking lot. The group built a 20’ x 11’ LED screen in front of the bayou for an incredibly crisp, high-quality image. Cars arrive to assigned parking spots, where viewers can order from food trucks and Raven Tower for delivery to their cars. The opening previews feature videos of local bands, as Generations AV wants to showcase the Houston musicians they know and love. “We [at Generations AV] are used to programming events. We want to add something special,” says Production Coordinator and Drive-In Manager Rachel Donelson.

Like Space City, the Best Little Drive-In chooses films based on themes in an attempt to move beyond classic or overly familiar drive-in screenings. It also has permanent restrooms available thanks to Raven Tower. In addition to offering delectables from local food trucks, this drive-in also has movie-themed cocktails available from Raven Tower, also delivered to one’s window. “We want to make it an experience,” says Donelson.

Two other drive-ins have a more corporate feel.

Rooftop Cinemas, which has been operating in Houston for a few years now, opened a drive-in on Summer Street at Sawyer Yards. Each night, movies are projected onto the silos, giving the image a ribbon-like quality. Car parking tickets specify the pricier “central view” or the “side view.” Rooftop has opened outdoor cinema locations around the country and in London; the company’s public relations representative didn’t respond to requests for comment. 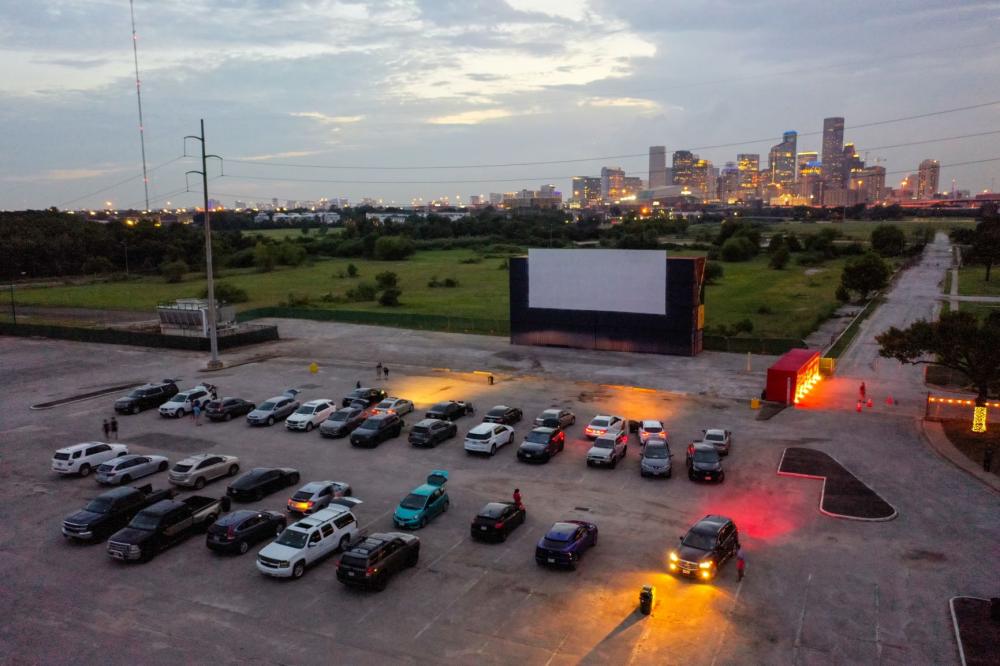 An aerial shot of Moonstruck Drive-In. Photo by Shannon O'Hara, courtesy Midway.
Moonstruck Drive-In occupies an abandoned parcel east of downtown. It is operated by Midway, a privately owned real estate investment and development firm. The company is not mentioned on the Moonstruck website, whose “About” page remains blank but includes an image of two young people posing in front of shipping containers. In 2016 Midway began work on the Kellogg Root Brown manufacturing and office campus where Moonstruck is located. The site, 150 acres in size, was featured as part of Houston’s bid for Amazon’s HQ2 in 2017.

Arriving to the lot, covered in grasses, one is greeting by a shipping container with a “Welcome to East River” graphic that pairs a cursive “Welcome” with the industrial block lettering of “East River.” Each screening begins with a video that shows young people rowing single-scull boats, drinking coffee or beer, doing Crossfit, taking public transit, and smiling together in an urban environment. As the video continues, it becomes clear that it is, in fact, an advertisement for East River, and that East River is to be a live/work/play development located exactly where one is parked and where the 60’ x 25’ screen has been fashioned out of shipping containers, near the banks of Buffalo Bayou in Houston’s Fifth Ward. 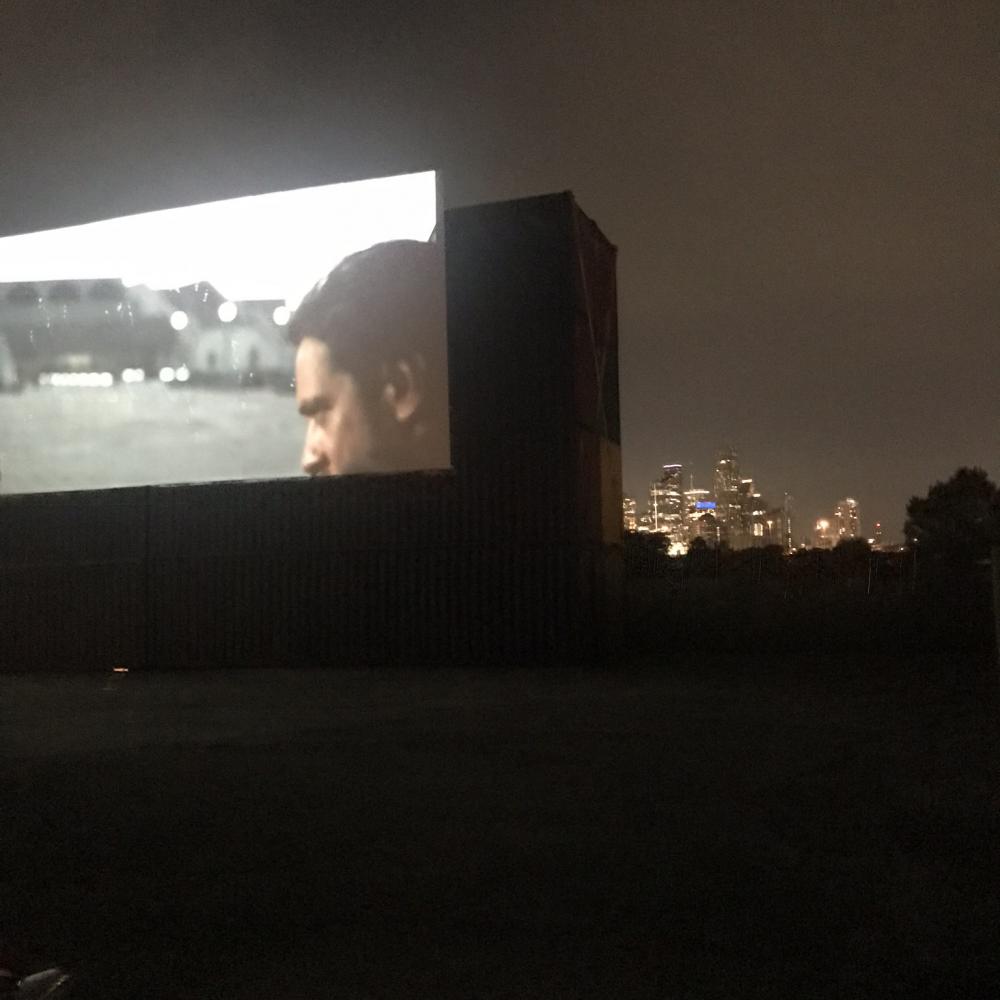 Like Uptown or Midtown—neighborhoods whose rebranded titles don’t make geographic sense—East River’s naming is aspirational. It appears to be a reference to the New York’s East River and is timely given the efforts underway to improve Buffalo Bayou east of downtown. In November 2019, Buffalo Bayou Partnership released a summary of its Buffalo Bayou East Master Plan, led by Michael Van Valkenburgh Associates, Inc., which will greatly transform the areas along the bayou east of downtown. Recently, Lea Weingarten of Weingarten Art Group worked with the East End District to finalize the East End Art Program Plan as well. The East End is on the verge of radical change. Beyond the fluvial differences between bayou and river, Midway’s large project—and the larger vision for this part of Houston—deserves further attention beyond the scope of this article.

These new drive-ins are fascinating not just because of the creative pivot that some small businesses have made to fill a void in community culture, but also because Houston's downtown area has the flexibility to support four drive-in movie theaters simultaneously. Under these conditions, Houston’s emptiness is a positive aspect. Pieces of underused real estate in the country’s fourth largest city have quickly been brought to life for the benefit of masked and distanced Houstonians.

Victoria (Torie) Ludwin is a writer and editor living in Houston. She has previously written for Cite on natural swimming pools, playground design, the Whole Foods at the Galleria, Park(ing) Day, the I-45 expansion, trees, urban highway reclamation, and more.