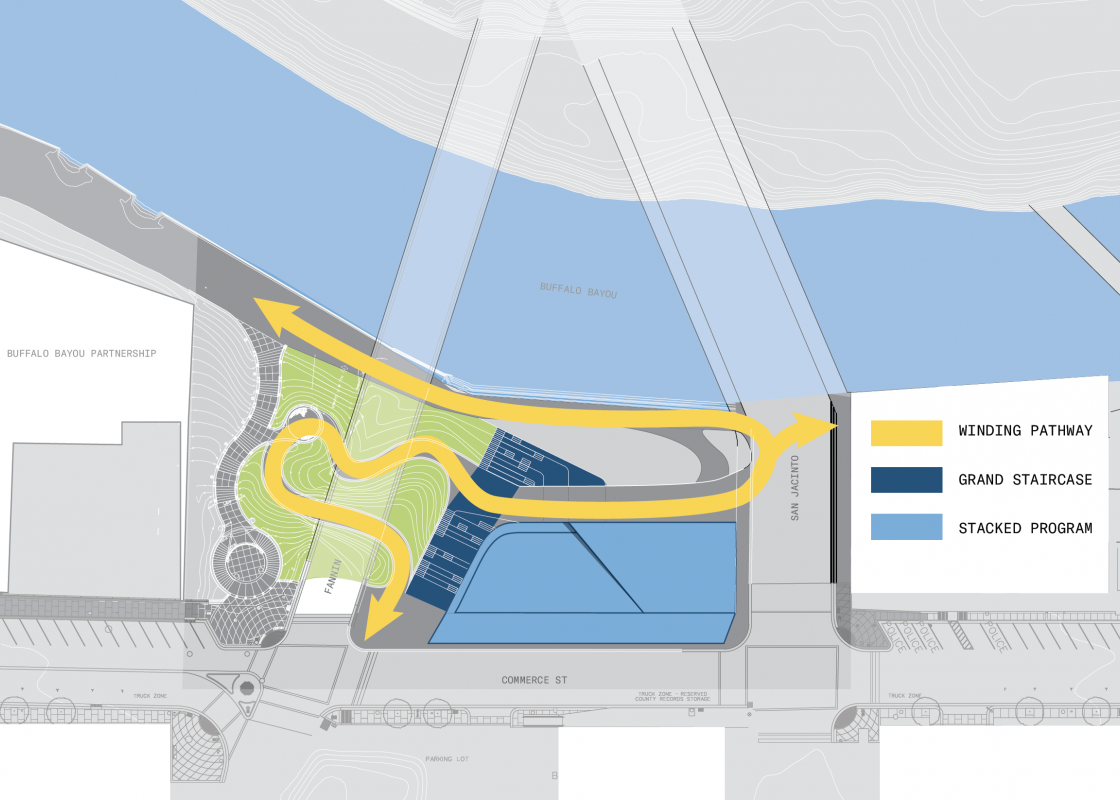 With Houston and Harris County spending millions of dollars to buy and remove structures from floodways — the most vulnerable part of the floodplain — does it ever make sense to build new in the floodway? The answer could be yes, at least for key sites and when the design is right.

In a post-Harvey Houston, the young professionals of Rice Design Alliance and AIA Houston presented a relevant and tough challenge to competitors in a spring 2018 charrette, “Nexus — Activate Commerce.” The fourteen teams reimagined the Commerce Street site of the Meat Packing Building, built in 1924 and designed by Joseph Finger. The vacant building has flooded many times and is being considered for demolition by its owner, Harris County. What comes next for the site given its prime location as the nexus of the Bayou Greenways, Bufalo Bayou project, and the edge of the Downtown Management District master plan was the challenge put forth to participating teams.

Each design team was expected to address the flooding issue in the area as well as the question of how to incorporate the site’s urban surroundings. Participants were asked to respond to three main points in their designs and presentations — resiliency, connectivity, and activity.

The teams attended a site visit where they learned about requirements and expectations that must be met for alignment into the area projects. The following weekend, the teams worked at the Rice campus for a full day to come up with a new design for the site. Monday, January 29, each team gave a five-minute pitch of their plans for the new space to jurors consisting of key players in the area at Buffalo Bayou Partnership’s new offices in the Sunset Coffee Building.

The jury chose one student team and one professional team as winners of the competition as well as an honorable mention. 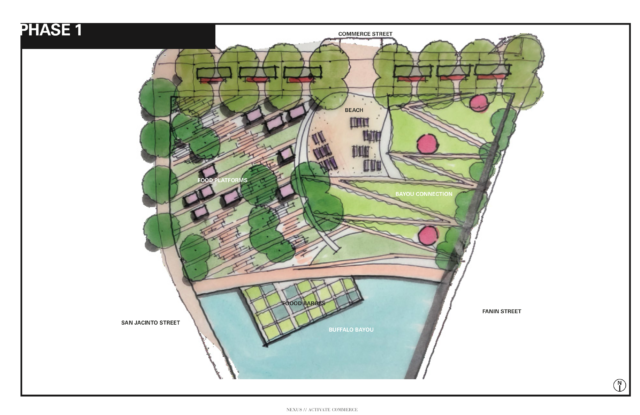 The overall winning team, Ctrl+Z, drew its members — Alex Hill, Jason Ficht, Jong Kim, Ryan Marchesi, Frank Gibase, and Sasha Levine — from the firms Design Workshop and Gensler. They imagined a new, elevated building and a park connecting the street and bayou. The proposal addresses the flooding issue and incorporates resiliency as well as activitations including a night club, an urban beach, and a water slide. Platforms elevate parts of the site above predicted flood levels and a system of floating barges are planted with an orchard.

Instead of shying away from the challenge of building on a flood zone, Ctrl+Z “[embraced] the site’s context and the reality of frequent flood events.” The team addressed the problem head on by “lifting the finished floor of the building nearly 20 feet off existing grade, [integrating] a floating pool, and [utilizing] a series of native gardens and terracing of the landscape.” However, the team states that “resilience is not defined solely by flood prevention.” Rather, Ctrl+Z takes it one step further by “[developing] a framework for adaptation to — and acceptance of — the stormwater events that occur on the bayou annually and provides a catalyst for district-wide change through a phasing strategy ... Thus, acknowledging historic culture, character, and catalytic development through adaptive, amphibious architecture.”

Anne Olsen, Executive Director of the Buffalo Bayou Partnership and a juror for the charrette, was impressed by the way that CTRL+Z “[looked] at connectivity in a cohesive way, seeing [the site as] part of a district.” A very important element to Olsen — the connection between the bayou and the street — was also present in the design.

Another juror for the event, Dan Zimmerman of NewForm Real Estate, noted that although all teams created excellent designs, “the winning team did best to activate the space for the majority of user types” as well as “plan for commercial addition in [their] second phase” all the while “[anticipating] the direction public spaces need to go rather than where they have been.” In short, Ctrl+Z was not afraid to dream big, yet realistically, in their design. 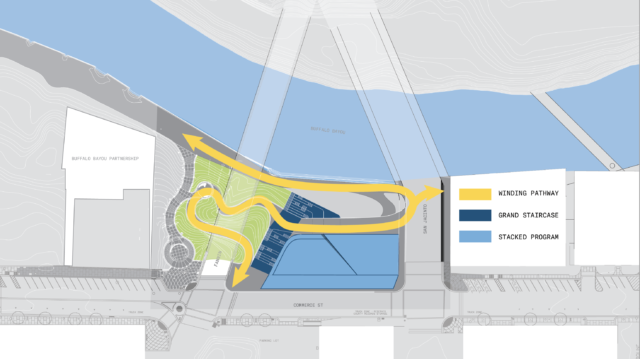 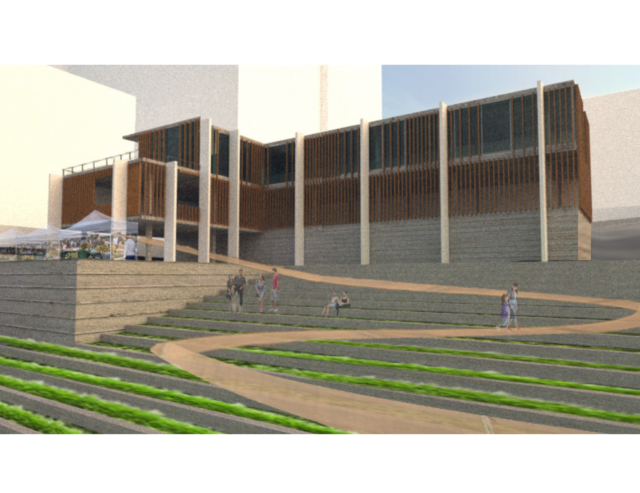 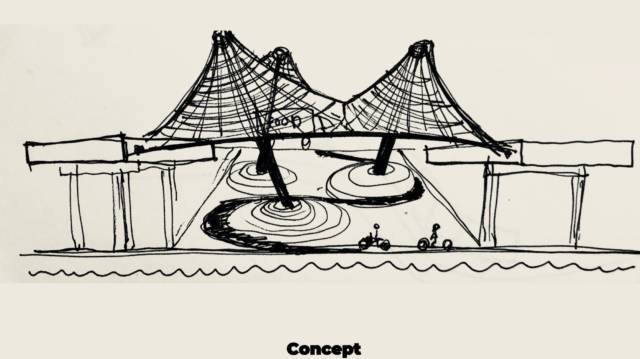 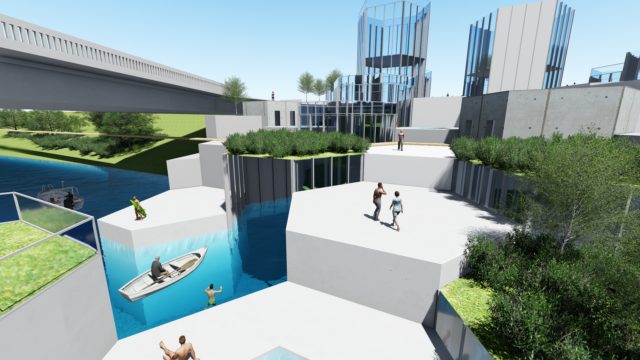 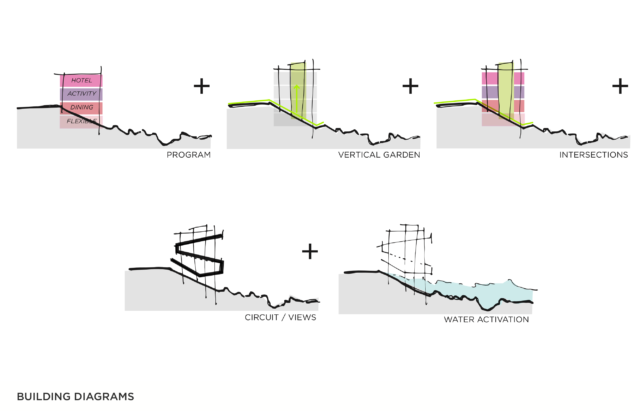 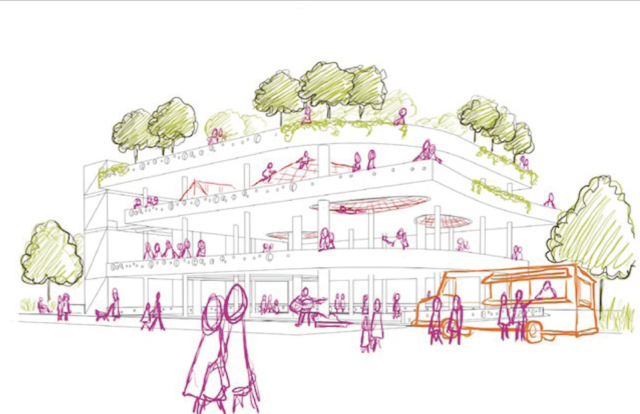 Another charrette juror, Chip Place, Managing Director of Capital Projects for the Houston Parks Board, felt that the honorable mention team, Pedestrians (Kelsey Walker, Grant Patterson, Maha Elestwani, and Marcel Merwin), “presented a strong, clear parti that recognized the site as an important link from downtown to Buffalo Bayou Park and the greater greenway system.” He appreciated its relevance “beyond an architecture project,” as they recognized “Houston’s emerging land use patterns based upon reclaiming our natural bayou infrastructure systems for parks, alternative transportation, and flood resiliency.”

Swim Good took home the prize for best design from a student team. Swim Good was made up of Rice students (Eric Kyle Cheung, Taylor Li, Haiming Wang, Helene de Mello, and Benson Xie). Their design included a platform that elevated the main building off the ground. Swim Good stated that “the most challenging part of this charrette was the time constraint and getting everyone on the same page” while planning their design. Nonetheless, they were able to “take what [they] knew, make a creative system, and present it well.” The team also felt that it was valuable to be able to have the experience of “working together to form a single product” as that is something they wish they were challenged to do more in their education.

The other proposals ranged from designs that focused solely on flood resilience to plans centered around beer gardens, water gardens, light shows, and pavilions. You can look through images from all the teams here.

The experimentation and range of ideas that the young professionals’ annual design charrette generated are vitally important. Even if some of the ideas seem too whimsical or idealistic, the response to Harvey needs to be optimistic. The proposals are a good shock to the system. As Houston rebuilds, more places for swimming and dancing may well be part of our resilient future.