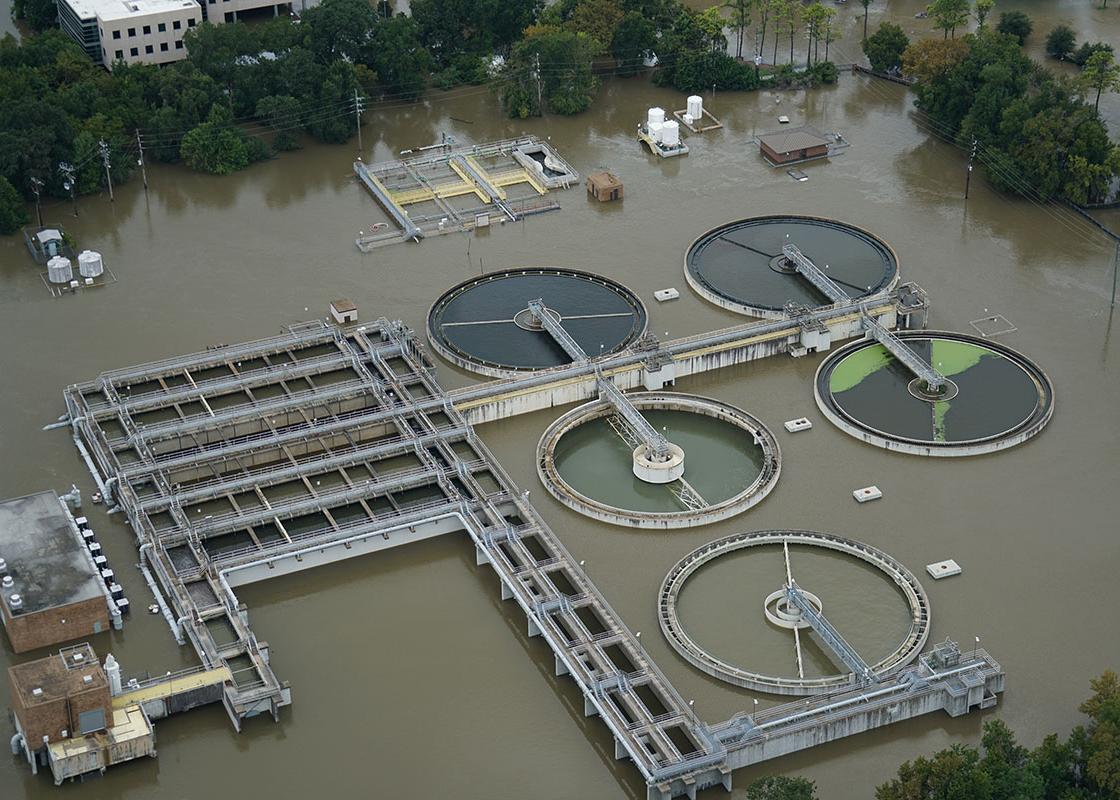 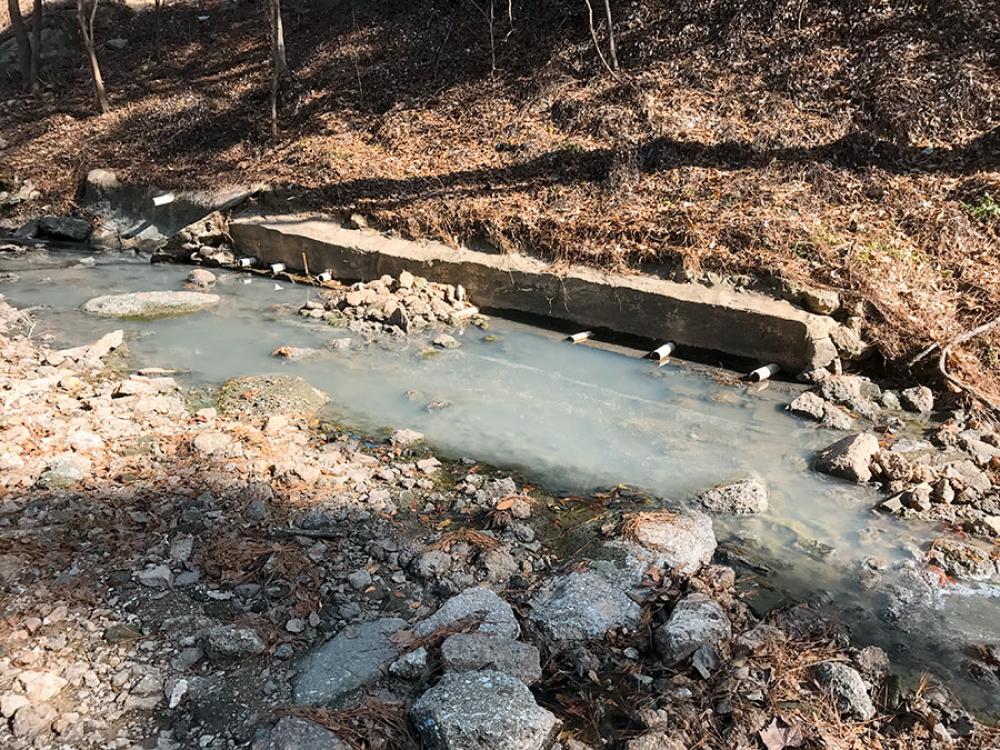 Wastewater flowing through a backyard on Stoney Creek Dr. Via Swamplot.

Beneath our city, over 6,000 miles of sewer pipes form an invisible network. Criss-crossing underground, they connect our homes, schools, places of worship, and where we work with wastewater treatment plants across Houston. Thirty-nine of the largest plants belong to the City of Houston, and hundreds more, operated by a mix of smaller cities, municipal utility districts, and private operators both large and small, dot our broader region, adding to its subterranean tangle. These systems are designed with a common purpose: to take waste from our homes, and the other buildings that make up our city, and transform it into something more innocuous—processed wastewater clean enough to return to our local bayous and flow out to Galveston Bay.

This system—featured in the first issue of Cite—has influenced our city’s sprawl. Its extent is so vast, and in some cases the pipes are so old, that it isn’t fully mapped. It supports a basic public health goal—protecting us from once-common diseases like typhoid and cholera, along with viruses and parasites like hookworm—and keeps Galveston Bay clean enough for swimming and fishing.

Assuming, of course, that the system is working. Data from local cities, along with the experience of residents, shows that these systems often don’t work. Sanitary sewer overflows happen every day, often more than once, resulting in raw sewage pooling in apartment greenspaces and elementary school grounds and toilets backing up into homes and yards. Rainstorms also can overwhelm and combine sanitary and stormwater sewers, systems which are supposed to function separately, and flush hundreds of thousands of gallons of diluted sewage into Houston’s bayous, parks, and other open spaces. (Well-known examples include Buffalo Bayou near University of Houston-Downtown, Woodland Park in the Heights, and the Texas Medical Center by Brays Bayou.) Whatever form an overflow takes, when raw sewage escapes treatment, it exposes us to risks that we thought had been designed away. 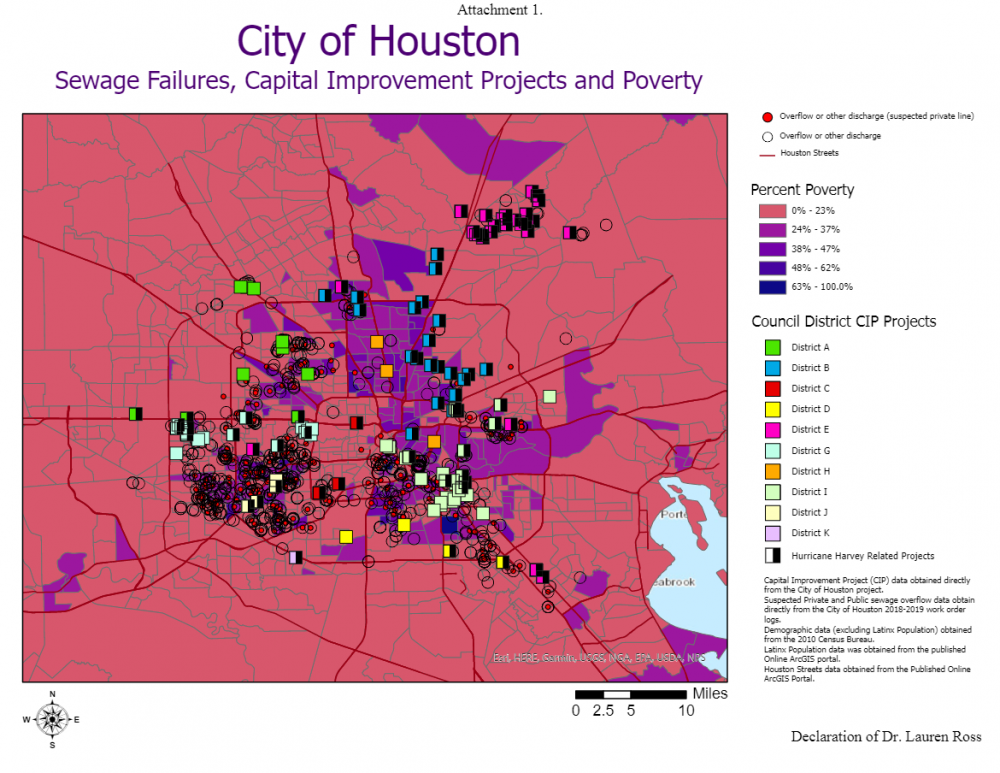 Across the broader Houston region, wastewater treatment facilities reported more than 13,000 overflows from 2011 to 2017, representing more than 80 million gallons of sewage evading treatment. For a sense of scale, BP’s massive Deepwater Horizon explosion, the largest oil spill in U.S. waters, spewed 130 million gallons of oil into the Gulf of Mexico in 2010. The Exxon Valdez spill, the next largest, released 11 million gallons in Alaska’s Prince William Sound in 1989. The scale of our region’s sewage problem falls somewhere between these two disasters.

Houston’s and Baytown’s systems have been responsible for most of these overflows, with the largest occurring during Harvey. In Texas, our region ranks second only to Dallas-Fort Worth, which spilled nearly 120 million gallons of sewage in 2018 alone. Their sewage problem is ours, too: 10 million of those gallons spilled into the Trinity River, which flows downstream and supplies Houston with most of our drinking water.

These overflows have increased our vulnerability to illness and dirtied local bodies of water. The Texas Commission on Environmental Quality, our state’s chief environmental regulator, has classified close to half of our bayous, rivers, and smaller streams as “impaired”—meaning that they are polluted and need to be cleaned up. This largely is due to elevated levels of bacteria and other markers of pollution associated with faulty sewage treatment. Though this problem spans the entire region, zip code matters: if you are Black, brown, or poor in Houston, you are more likely to experience a sewer overflow and related health effects. 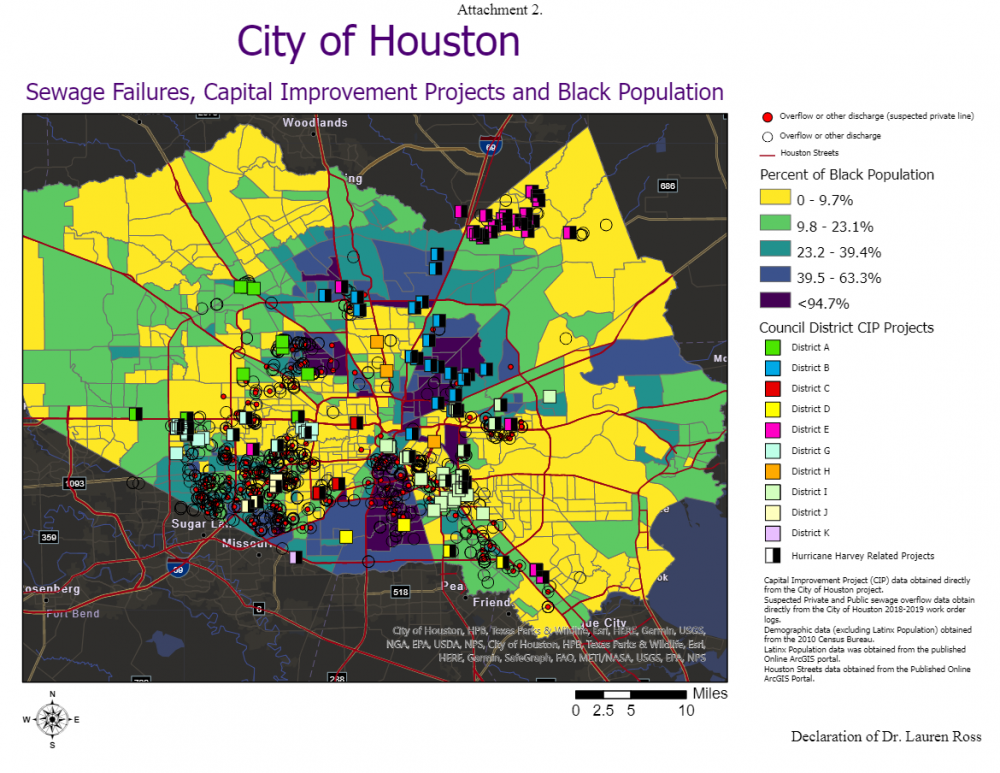 From hurricanes to winter storms, disasters magnify our sewage problem. Hurricane Harvey damaged or destroyed wastewater treatment plants across our region. In the wake of the storm, regional wastewater treatment systems failed to treat 31.6 million gallons of sewage, which mixed with floodwaters and contaminated wells used for drinking water. In the following weeks, e. Coli levels in local bayous were more than fifty-seven times the acceptable limit, and fecal bacteria was found in a relatively pristine coral sanctuary more than 100 miles off our coast. After Winter Storm Uri, water outages persisted for weeks. In the same neighborhoods where residents dealt with repairs to pipes supplying drinking water, they also encountered broken sewer pipes. Without action, increasing rainfall and sea-level rise driven by climate change will make all of this worse.

It’s likely obvious by now that this problem is serious and demands an equally serious solution. This spring, a federal judge ruled on three years of Clean Water Act litigation and through a consent decree approved a plan that will require the City of Houston to invest $2 billion to overhaul our system over the next fifteen years. By replacing aging infrastructure and improving monitoring across the city’s entire wastewater system, the aim is to reduce sewage entering local bayous by six million gallons a year. 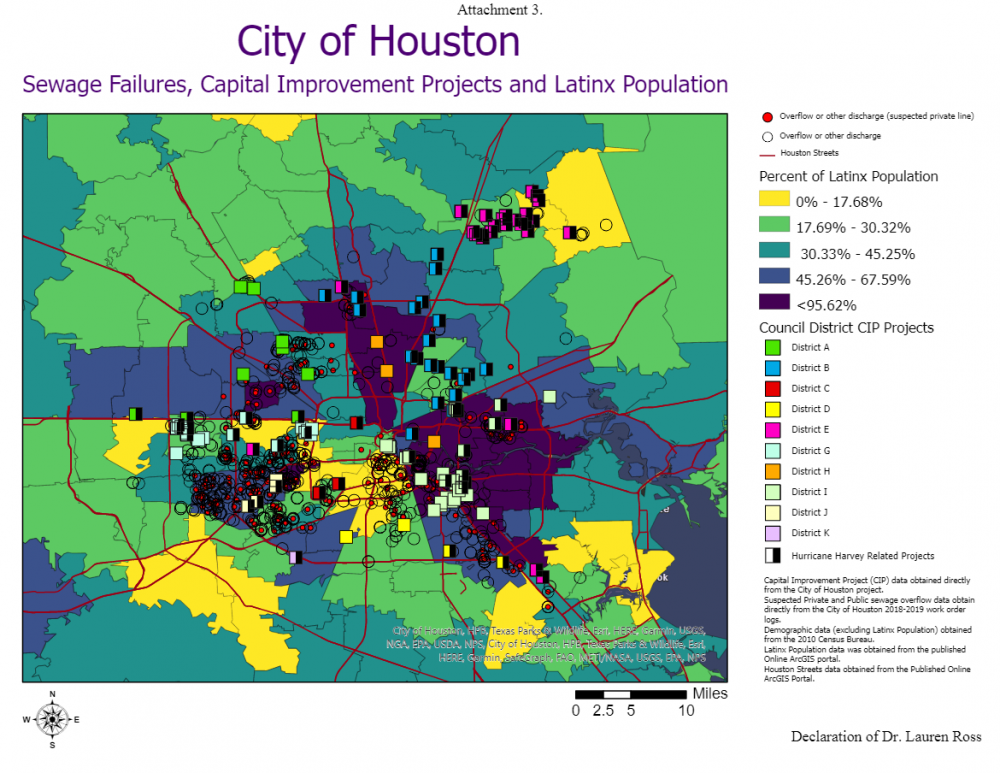 The plan has its limits. It is restricted to the city of Houston, so it won’t affect overflows caused by neighboring cities like Baytown, responsible for spilling more than 30 million gallons of untreated sewage over the last five years. Nor does it address sewage sent downstream from our neighbors in Dallas-Fort Worth.

Worse, it doesn’t help Houston residents facing sewage problems within their homes. In overhauling their own sewer systems, other American cities like Jackson, Mississippi, and St. Louis redirected federally-mandated penalties to create programs to directly help people repair private sewer lines or connect their homes to the main sewer system. Though the City of Houston is required to pay $4.4 million in penalties to federal and state regulators, none of this will go toward similar programs. In contrast, to aid residents with broken sewer pipes on their own land, Houston’s current plan focuses on education and enforcement. Houstonians unable to afford repairs may face financial penalties instead of being given the help they need. With Houston’s Black, brown, and poorer neighborhoods enduring a bigger share of the city’s sewer problems, this is an environmental justice issue.

This oversight is not entirely our city government’s fault. The Trump administration, which oversaw most of the plan’s negotiation, constrained the creativity of cities attempting to resolve their sewer problems through a series of rules and policy documents, which have mostly been struck down. As the Biden administration prioritizes both environmental justice and investments in water infrastructure, Houston may have opportunities to close this gap. If the city does not, we may end up with a situation that amplifies the unacceptable conditions of the present: our Black, brown, and less wealthy neighbors will be exposed to environmental hazards that whiter and wealthier Houstonians are not. 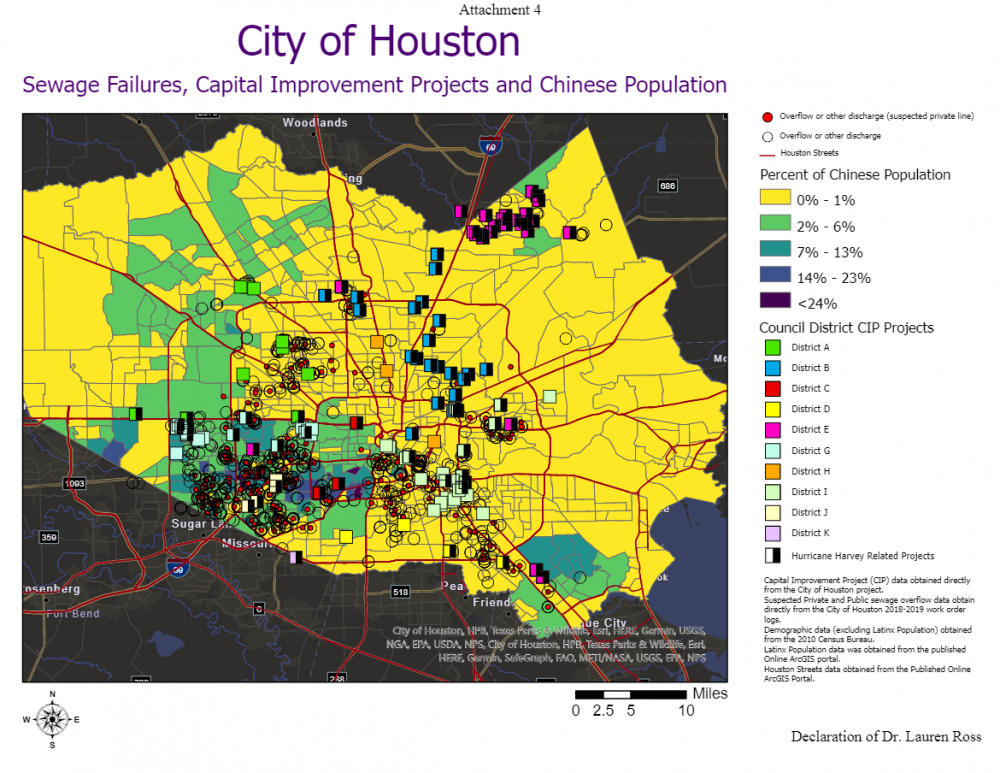 Houston’s plan will attempt to fix problems that have gone unsolved for too long. The most problematic infrastructure is mostly hidden out of sight, so it’s easy to assume that these injustices are by design. These systems are doubly invisible because when they break, they concentrate overflows in communities that have been historically underserved. By delivering on its current plan and working to close its gaps, Houston can leave us with not just cleaner water, but a more just future.

Kristen Schlemmer is the Legal Director and Waterkeeper for Bayou City Waterkeeper, a Houston-based organization focusing on water quality and wetlands protection across our region with an emphasis on climate resilience and environmental justice. After Bayou City Waterkeeper threatened to sue the City of Houston over more than 9,000 violations of the Clean Water Act associated with its sanitary sewer system in 2018, the U.S. Environmental Protection Agency initiated enforcement proceedings, which culminated in a consent decree requiring the city to invest $2 billion in its sanitary sewer system over the next fifteen years.