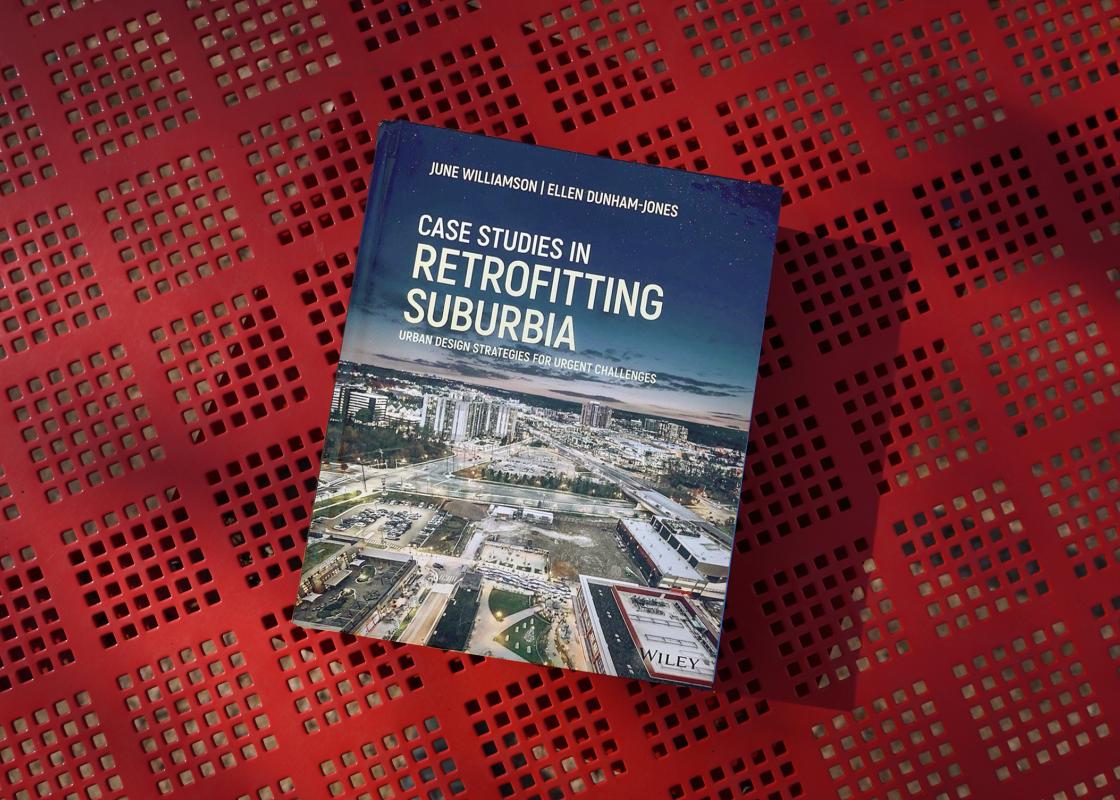 How to Retrofit Suburbia?

Suburban sprawl has defined the urban landscape in the United States for the past seventy-five years. The first suburbs were built for returning WWII veterans, and today, despite ongoing lifestyle changes, developers still produce these places as if the ideas of that time were cast in amber. Today, Millennials accrue student debt that prevents them from considering home ownership, and, along with Gen Z, must face the serious impacts of climate change. 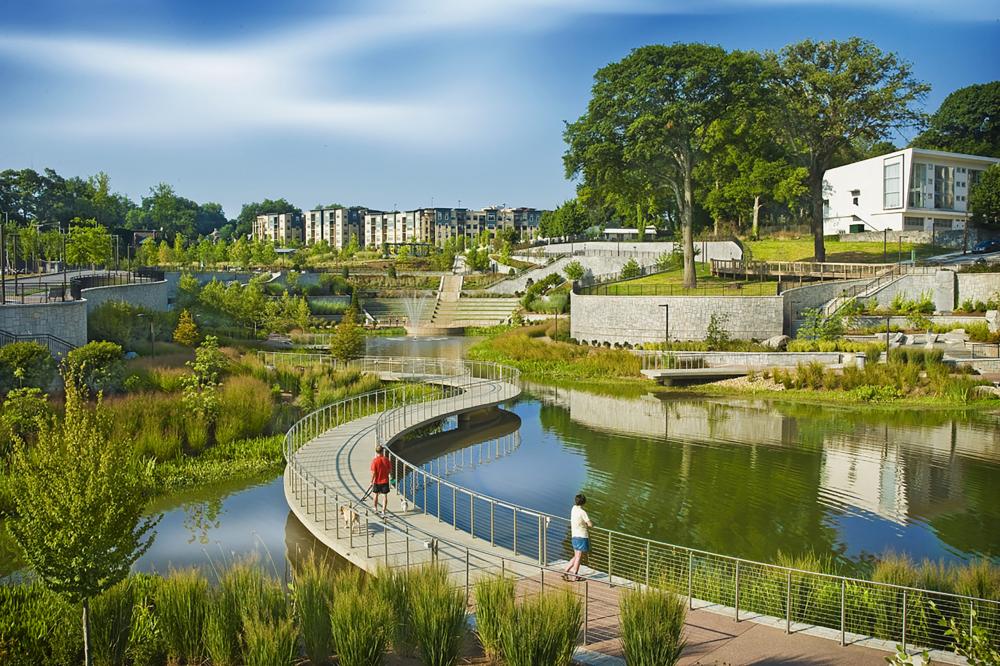 A detention pond is the center of the Historic Fourth Ward Park in Atlanta, designed by HDR. Photo by Steve Carrell. Via ULI.

Solutions for suburbia are what Ellen Dunham-Jones, Professor of Architecture at Georgia Institute of Technology, and June Williamson, Associate Professor of architecture at CUNY) first explored in their 2008 book Retrofitting Suburbia: Urban Design Solutions for Redesigning Suburbs. Now, their Case Studies in Retrofitting Suburbia: Urban Design Strategies for Urgent Challenges, published in January by Wiley, brings their ideas into today’s world—not missing a beat, the book even addresses the ongoing effects of COVID-19 among its thirty-two examples, four of which are in Texas: La Gran Plaza in Fort Worth; and The Domain, ACC Highland, and Mueller, in Austin.

Refreshingly, their new book doesn’t pit cities against suburbs. Instead, it establishes that both ends of the density spectrum are valid places to live and work. The first half of the book is devoted to new concepts addressing the ills of the suburb while the second half presents the case studies in their entirety. Both this new release and the prior volume would be more successful if they had focused on visual explanation through renderings, maps, diagrams, and photos rather relying on text. It’s a bit like reading an art history text without the art itself. Design Like You Give a Damn: Architectural Responses to Humanitarian Crises by Kate Stohr might be a good precedent on which to model their next in the series. Still, Case Studies is the definitive book about the massive undertaking of retrofitting the suburbs. Its strongest successes arrive in its anticipatory questions, various studies, recommendations for further reading, and avoidance of architectural jargon. 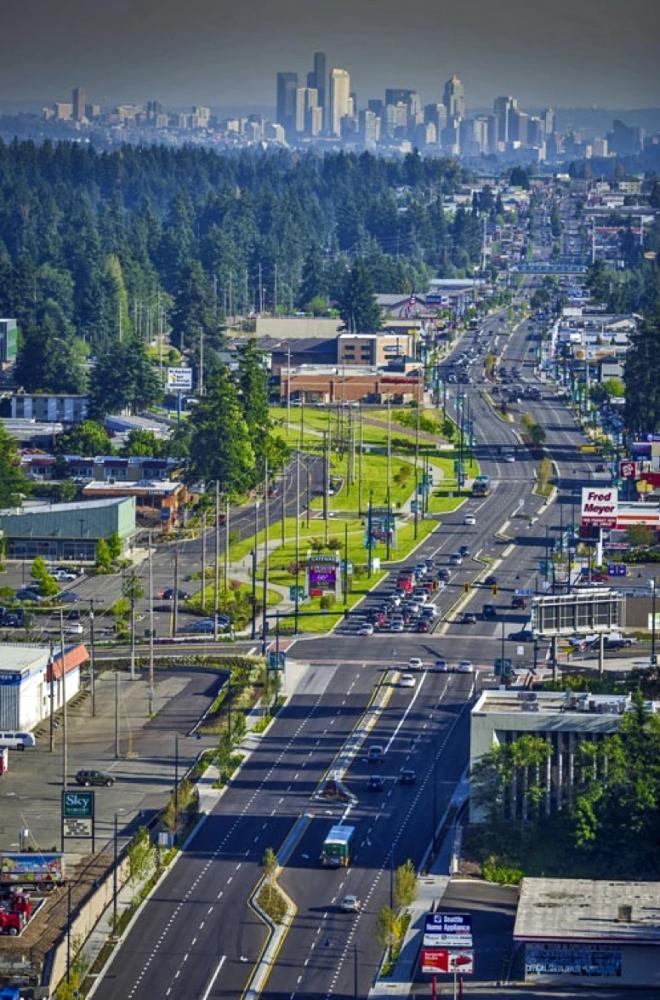 The need for retrofitting is most obvious in edge cities, where collections of buildings sprout up, at times between suburbs and the city and at others between suburbs and the countryside. In these locations, developers build mixed-use developments to simulate an urban experience. But in trying to solve one problem, they create another—that of homogeneity, with the same pieces rearranged slightly differently, all across the country. There is no effort to produce public space, support local businesses, or consider site specificity. Like the recent phenomenon of “blanding” in graphic design, a certain amount of homogeneity exists within these retrofitting efforts. To differentiate their offerings, developers attempt multipurpose developments to simulate “real” urbanism, a mélange of apartments, restaurants, retail, and greenspace. But it’s a predictable layout of the same pieces, an idiot-proof starter set rearranged ever so slightly, as if we’re no longer playing SimCity but living in its simulation. The places where we live deserve better than this lazy copy/paste “solution” dragged across actual land, in addition to the computer screen. Instead of hard conversations about site specificity, building materials, or policy that would promote local businesses, the public regularly cedes control to developers who talk in terms of ROI and dollar per square foot.

There’s notable interest in software that helps to automate design decisions, so Case Studies appropriately offers some solutions: Envelope, built by ShoP and Sarah Williams, uses zoning data to generate possible massings for parcels. It also works with Carmera, a program that informs street design based on real-time feedback. In another example, Wallgren Arkitekter and BOX Bygg created Finch, a parametric design tool, which generates floor plans adapted to specific site constraints. And as of 2018, life cycle analysis, which demonstrates understanding the carbon impacts of construction, can be evaluated during the design process thanks to software designed by MIT researchers. 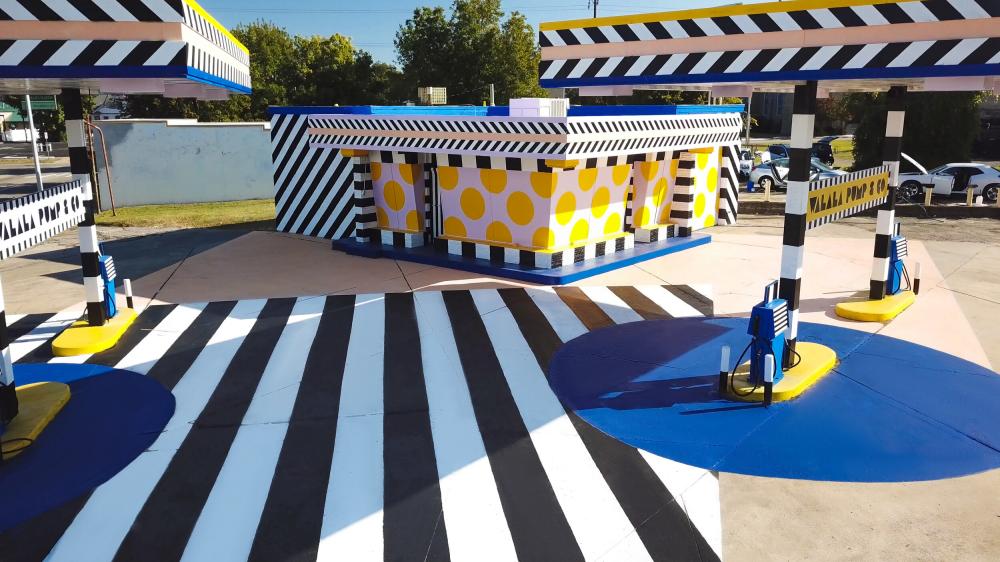 Walala Pump & Go is an art installation in Fort Smith, Arkansas, by artist Camille Walala. Realized in 2019, the project was commissioned by The Unexpected as part of a program to invigorate underutilized properties. Via Camille Walala.

Still, even if their massings might one day be the output of an algorithm, there’s nothing novel about most of these mundane mixed-use developments. Many ironically attempt an aesthetic sense of permanence when they are, in reality, quickly disposable. Template-based designs result in disjointed and static developments that perpetuate uniformity over discovery. Local identity makes residents feel rooted in their communities; it comes from the ability to realize unique architectures and landmarks. How to do this? Dunham-Jones and Williamson cite Charleston, South Carolina, as an example, as the city has invested in its urban design staff to retrofit developers’ designs free of charge. They also highlight HIA, “a community-based decision-making process, usually voluntary but sometimes regulatory, that is used to evaluate the potential health effects of a plan, project, or policy before it is built or implemented,” and Walk Score as useful tool.

Part of the solution requires acceptance of the fact that we’ve built enough: it’s time to start infilling. Rethinking of the vacant or underutilized spaces ought to be encouraged by governmental support for cultural programs: look at France, whose l’exception culturelle is upheld by subsidies, quotas, income support and tax breaks to help the arts exist. Filling empty buildings could give homes to non-profit organizations, theater troupes, and art galleries; in turn, local communities would benefit from a diverse set of attractions. Here lies the friction, as duplication of one successful setup across the country treats architecture as a commodity, when in fact its success depends on intricate and supportive local conditions. The authors write that “following the loan crisis in 1989, many developers took their companies public becoming a standardized commodity traded on Wall Street[. … T]he landscape from the 1990s reflected Wall Street’s demand for predictability in increasingly uniform, repetitive buildings types with little, if any, accommodation to the particularities of place or place-making.” 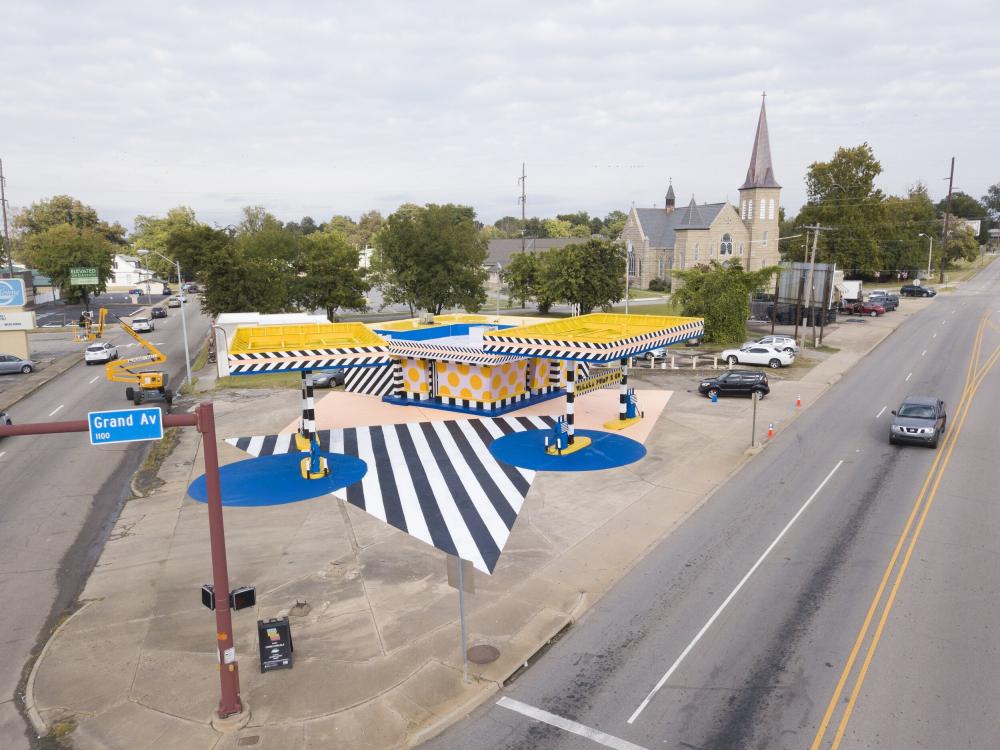 Walala Pump & Go is an art installation in Fort Smith, Arkansas, by artist Camille Walala. Realized in 2019, the project was commissioned by The Unexpected as part of a program to invigorate underutilized properties. Via Camille Walala.

Finance is risk-averse and comfortable with the clear asset classes, such as single-use buildings like big box stores. As an alternative, the authors’ first book notes that Congress for the New Urbanism proposes to make retrofits easier and less expensive by expanding asset classes. Both books rightfully target auto-dependent sprawl as the enemy, as its dominance continues to slow the grow of mass transportation, escalates pollution, enables further decentralization, and alienates citizens through distancing that prevents interaction and discourse.

Thanks in part to our media landscape, the status quo has even imprinted itself in the minds of those who construct the built environment. The authors declare: “Perhaps you can take the shopping center out of the suburb, but you cannot take the suburban mind-set and building typologies out of the developers and city officials.” Discussions at every scale—even in the comments of Houston’s now-defunct Swamplot—indicate that people are disgruntled about the state of where they live. How we aggregate and amplify those voices to make change is critical. It’s key to bring the disciplines of forestry, architecture, public policy, and real estate in conversation with each other, both for actual projects and within all tiers of education.

Architecture isn’t the answer in all situations. In some, basic fixes work wonders: simply lining streets with trees helps reduce stress and noise levels. Case Studies features Marjy Stagmeier, who invested in a blighted apartment complex in Marietta, Georgia, and turned one apartment into a space for after-school programming. Still, the notion that multiple overlapping systemic issues can be resolved by the design of a new building or landscape is ambitious at best. 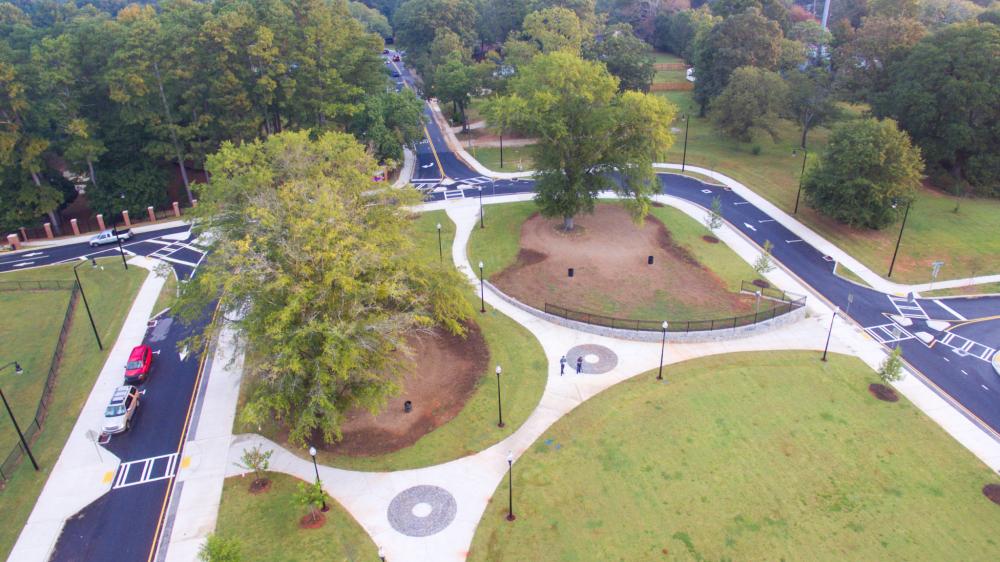 After Mableton, Georgia, adopted a form-based code, an intersection was reconfigured by Pond & Company into a one-way couplet that enhances safe access to a nearby school. Photo by Matthew Wilder. Via Pond & Company.

In Case Studies, Dunham-Jones and Williamson support each of their six ambitions with examples. We have many solutions as to how to fix our cities, but will anyone listen? Let’s hope so. Technology, in the form of software, may help, but the largest threats looming ahead are political, not technical, in nature. The authors write that “remaking our sprawling suburbs, with their enormous footprints, shoddy construction, hastily put up infrastructure, and dying malls, is shaping up to be the biggest urban revitalization challenge of modern times.” Our lives depend on this transformation, as the health of Americans is at stake, as the authors note in an interview with The New York Times.

Our lifestyles will always outpace the construction of the built environment, but it’s time for a much-needed overhaul and, perhaps, some futureproofing while we’re at it. As Dunham-Jones and Williamson note, “Suburbia was not designed with climate change, sustainability, or resilience in mind. Rather, its infrastructure reflects what Hillary Brown […] describes as an industrialized worldview of convenience, efficiency, and bureaucratic control.” This, like so much else, must change.

Travis San Pedro is a Rice alumnus (Hanszen, ’12). His graduate studies at Yale University focused on material culture and built environments. He previously worked at Robert A.M. Stern Architects. He writes architectural criticism, designs furniture and objects in his spare time, and hopes to one day exhibit at the Venice Biennale or Maison et Objet.