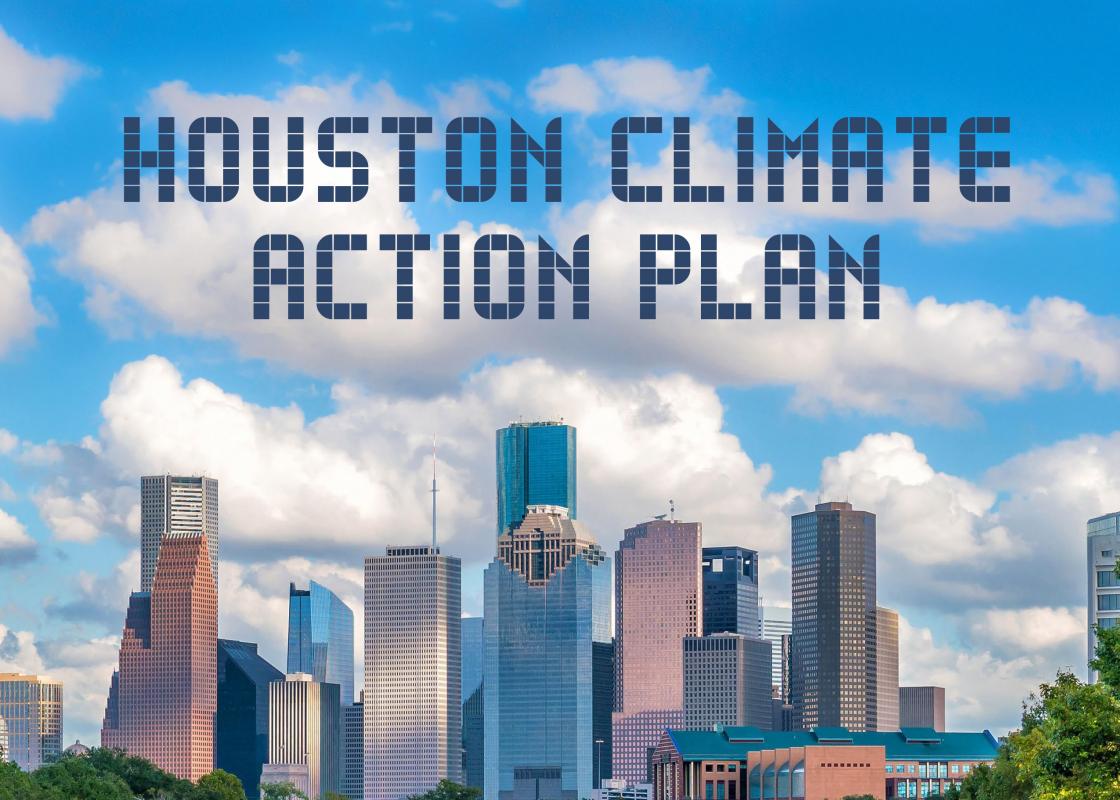 It's a momentous occasion when Houston, a city synonymous with the oil and gas industry, attempts to change direction and focus on renewable energy. The release of the City of Houston’s first Climate Action Plan (CAP) on Earth Day last April (in the midst of the pandemic), is a testament to the city’s commitment to this vision. Building on years of non-profit and grassroots advocacy, the leadership of Mayor Sylvester Turner in the past few years—his affirmation of Houston’s commitment to the C40 Cities Global Climate Leadership Group, service as Vice Chair of the U.S. Climate Mayors, and commitment to make Houston carbon neutral by 2050 in accordance with the Paris Climate Agreement—has made the difference in changing the tone of regional conversations.

To reach carbon neutrality in Houston by 2050, the CAP establishes twelve goals across four categories: Transportation, Energy Transition, Building Optimization, and Materials Management. The CAP builds on Houston’s mammoth efforts around resilience: Resilient Houston was also launched earlier this year and the two plans are intimately connected. The closer we get to going over 1.5 degrees of warming—a consequence of global inaction on climate change—the worse Houston will fare when hit with more intense and frequent natural disasters with impacts that will affect our region for years to come. The work of Atmos Research and their recent release of the Houston Climate Impact Assessment tells us that the likely scenario for Houston includes hotter-than-average days year-round, longer summers, more energy burden associated with buildings struggling to keep up, new records for our hottest days (many more days above 100 degrees and more back-to-back), higher risks of drought in some years, and higher flood risks in others. We’re already the underdog, so there’s no time like the present to try to get ahead of the game.

Regionally, we’re lucky to have the brainpower of the Houston Advanced Research Center, whose team worked with C40 Cities to calculate the City of Houston’s greenhouse gas (GHG) emissions and worked to better understand how goals and strategies in this plan would translate to carbon neutrality by 2050. Strategies proposed by the CAP equate to a 40% reduction in GHG emissions by 2030 (18 million metric tons of CO2), 75% by 2040 (33 million metric tons CO2), and 100% by 2050 (45.5 million metric tons CO2).

Highlights from the CAP’s four sections include:

The City has achieved some solid early wins. Within a week of the plan’s release, the City negotiated a deal to ensure 100% of the City’s municipal energy needs will be met with renewable energy. This meets the first action of the Energy Transition goal with the City leading by example. Additionally, the way many of these goals and strategies are implemented in place—in specific communities—will dictate how successful this plan is in meeting its equity goals. Sunnyside is one of the targeted neighborhoods for piloting some of the goals in this plan, including the repurposing of a 240-acre former landfill to become one of the largest urban solar farms in Texas, if not the largest. This effort, paired with potential green jobs training and other sustainability programs, could set Sunnyside up to be the center of equity-driven climate action regionally.

The inclusion of co-benefits—the additional benefits we can garner with thoughtful action—was a welcome addition to this plan to ensure it makes the most of shared goals aligned with other resilience and quality of life initiatives within the city and region. For example, planting trees results in more carbon capture but also improves air quality, mitigates urban heat islands, provides wildlife habitat and opportunities to connect with nature, and has been shown to increase property values. Each goal outlines key co-benefits that are vital to consider early in the process of envisioning how actions will translate to change on the ground.

However, while goals, targets, strategies, actions, etc. outline the “what” that the CAP aims to accomplish and some of its “how” to do so, the devil is in the details. Staff, business leaders, and community members will need to be vigilantly thoughtful in understanding how to implement strategies that truly maximize co-benefits—especially equity—and minimize negative externalities. For instance, locating tree planting and other greening efforts in under resourced communities has the potential to provide more equitable access to nature, reduce environmental risks that are likely more substantial than in more affluent areas, and mitigate urban heat islands for populations that are usually much higher risk for heat related illness or death. But without taking proper action to avoid unintended consequences, targeting tree planting and other types of greening efforts in under-resourced communities also runs the risk of displacing residents who cannot afford to live in the neighborhood if and when environmental conditions improve and property values increase. With the help of the Kinder Institute for Urban Research, the City of Houston will soon have a dashboard to track the implementation and impact of the Climate Action Plan, in addition to tracking Resilient Houston and many other City plans. The ability of such a dashboard to track impact will not only be vital in understanding how co-benefits are created, but also in helping communities see impact across different sectors, departments, and plans.

Even if Houston accomplishes every single one of the emissions reduction goals outlined in the plan, it will not be enough to get to carbon neutral in 2050. Carbon offsets of around 10 million metric tons of CO2 by 2050 are outlined as a key pathway to attaining neutrality. Simply stated, there are two ways offsets can occur: 1. The development of technology to actively remove carbon from the atmosphere, which Houston could certainly be a leader in nationally; and, 2. The conservation, restoration, and long-term stewardship of natural systems that hold carbon. The latter of which has the most opportunity to leverage real and impactful quality of life benefits locally. If Houston is able to establish a regional carbon market to allow regional emitters to buy carbon offset credits, then natural lands could be preserved as carbon sinks with major benefits for both humans and non-human organisms. Houston even has the endemic ecosystem—coastal prairies—that can serve as a major site of sequestration in the carbon offset business. The truth is that Houston's carbon market needed to be established yesterday.

My two biggest critiques about the CAP concern its overarching framework of equity as a “co-benefit” and the planning process itself, though we know the first attempt at something this big is never perfect. In my view, there are three ways of framing equity in processes like these: 1. Equity as a co-benefit: “If we can find a way to promote equity that’s not at the expense of carbon reductions, we’ll do it;” 2. Equity as a lens: “We’ll run every component of a plan through an equity lens that allows us a better understanding of both the positive and negative externalities and then we’ll make more informed decisions that balance equity and climate goals;” and 3. Equity as a core driver: “No climate plan is successful without equity at its core and every action must also be either neutral or positive in its equity impact.” The first two ways of thinking are problematic because they perpetuate binary thinking: The idea that racial equity and climate goals are at odds with each other is a false dichotomy. The third way is the equivalent of the saying, “No one is free until we are all free.” I would love to see the City of Houston attempt a paid Climate Ambassador program, potentially through Hire Houston Youth, as one way to try to better embed equity in this work and to ensure the participation of voices that have historically been missing. In the recent development of their Climate Equity Plan, the City of Austin piloted a Community Climate Ambassadors program. They put out a citywide call for applicants who could engage with under-represented communities about climate-related issues, and selected twelve ambassadors who were offered modest financial compensation to facilitate a minimum of three discussions around challenges, barriers, and opportunities facing these groups.

I was also struck by the lack of information about who was engaged in the process to produce the CAP, including who was actually a part of the working groups associated with each of the plan’s four sections. Only the leaders of the groups are listed, and even they appear without any affiliation. I understand that there was substantial multi-sector involvement in collaboration with City staff to create this plan. And, while I do not want to underestimate the growth in thinking and the relationship-building associated with this planning process, I speak from experience when I say: If you support of climate action, it’s past time to get out of the closet. The culture of Houston will not change substantively enough for the city to be a leader in renewable energy unless folks do so. These working groups will continue to meet and work through implementation together with City staff, so there continues to be opportunity to get involved. More information about how to do so can be found here.

Even still, these working groups will not be enough on their own. The work of sustainability within the City of Houston needs to be elevated in two key ways. First, the City’s sustainability work, led by Chief Sustainability Officer Lara Cottingham, deserves to be formally codified into the City’s governmental structure to ensure its longevity through inevitable political change. Second, the City should establish a Sustainability Board or Commission to ensure transparent, long-term public oversight of the plan’s implementation and of future plan updates, set to happen every five years. Houston also desperately needs to band together with other Texas cities, despite our differences, to ensure the State of Texas does not take away even more opportunity for action by Texas cities in the 2021 legislative session, and beyond.

Finally, at the risk of sounding like a broken record, ours is a city with no zoning and major barriers imposed at a state level, among other complicated challenges and contexts unique to Houston. Business and community leaders, in addition to residents, need to buy in to this plan to make it happen because only a regional collective effort will ensure we deliver on what our Climate Action Plan is promising.

Katie Coyne leads the Urban Ecology Studio at Asakura Robinson where she works to integrate more science and data into their equity-driven practice. She considers herself bi-city, splitting much of her time between Asakura Robinson’s Houston and Austin offices, in addition to working on projects across the nation. Her work spans planning and design disciplines and incorporates resilient design, landscape ecology, plant, health, and climate science, and other bodies of knowledge into work on parks, conservation areas, urban landscapes, neighborhood and small area plans, sustainable tourism strategies, and green infrastructure design. Katie’s balance of education and experience in ecology, planning, and design has armed her with the tools to understand how economic, cultural, social, and ecological goals must be balanced across scales for a resilient and equitable future. She has been a part of the leadership team on numerous innovative projects including: Resilient Houston, Episcopal Health Foundation’s Healthy Places Toolkit, Montrose Livable Centers Study, Central Williamson Creek Greenway Vision Plan, Healthy Parks Plan for Travis, Bastrop, and Caldwell Counties, Pasadena Healthy Parks Plan, Austin FC Stadium Sustainable Design, Vision and Green Galveston, North Houston Livable Centers Study, and Dallas Water Gardens Ecological Design. In 2019, Katie won the Austin Under 40 Award in the Architecture, Engineering, and Construction category; was recognized by the Austin Business Journal as one of the top 25 women leaders in Austin; and, in 2020 won the Central Texas Planner of the Year Award. Katie also serves as Co-Chair of Austin’s Climate Equity Plan, Vice Chair on both the City of Austin Environmental Commission and Joint Sustainability Committee, and on the Board of Directors for The Trail Foundation and Equality Texas (#yallmeansall).