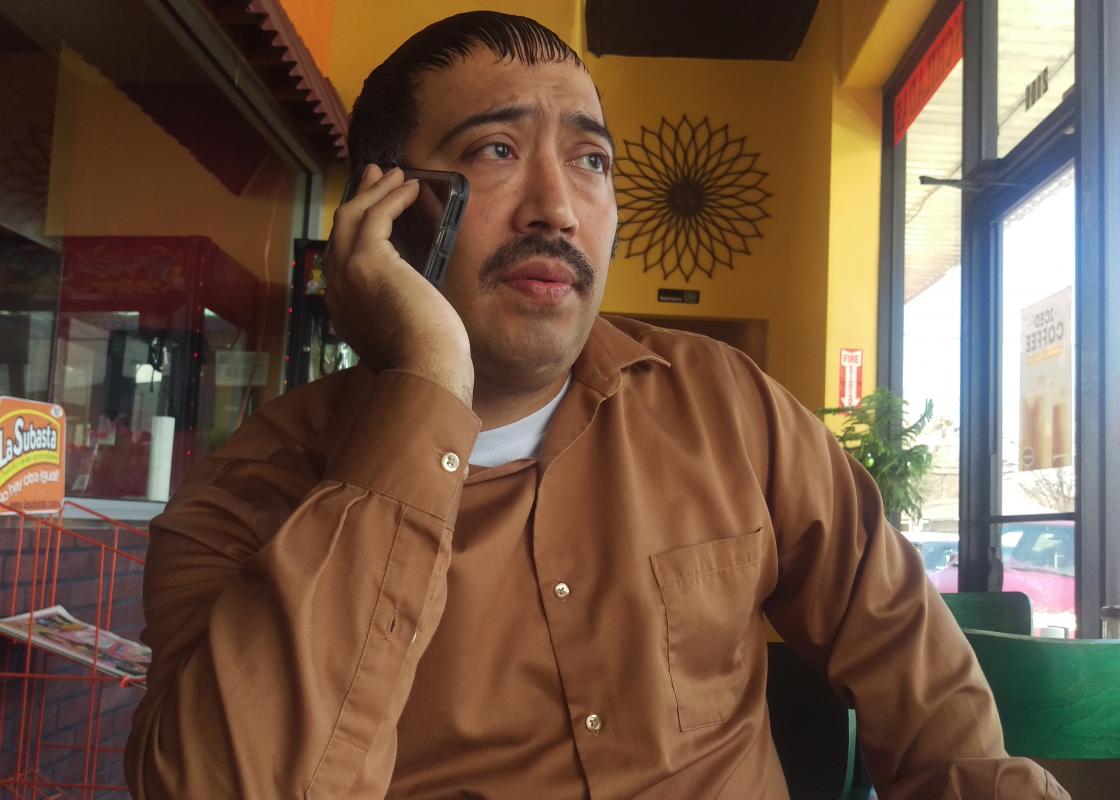 In March 2018, Houston hosted the Funders' Network Annual Conference to explore strategies for and stories behind creating more equitable, sustainable, and resilient communities. Rice Design Alliance created five tours in collaboration with the Funders' Network for people interested in getting a first-hand look at Houston’s vibrant neighborhoods and unique approaches to tackling complex challenges. This tour of communities along the Houston Ship Channel was made with help from Air Alliance, Texas Environmental Justice Advocacy Services, and Buffalo Bayou Partnership

Up and down the Houston Ship Channel are small incorporated cities and neighbor-hoods of Houston with multi-generational communities. On this tour, you will see why these neighborhoods are treasured by residents.

You will also see the environmental justice challenges they experience inside one of the world’s largest petrochemical complexes along one of the nation’s busiest ports. 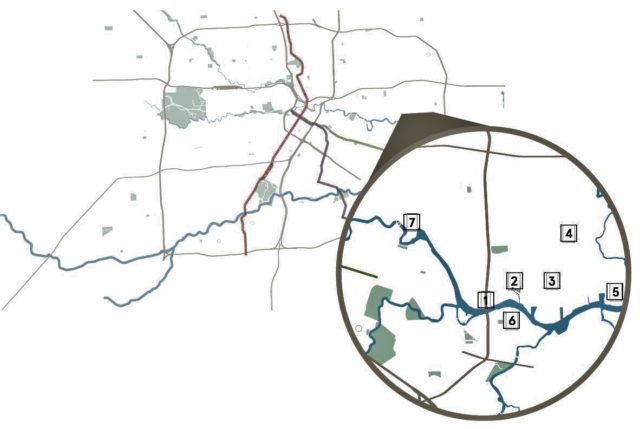 Points of Interest on the Ship Channel Tour

Matching the political power of industry with the voices of residents is a challenge. U.S. citizens often belong to mixed-status families and may not advocate for their interests out of fear of current immigration policies. In addition, impacted Ship Channel communities also benefit from the industry.

“A lot people are afraid to speak up because they work in refineries — it is a double-edged sword,” notes Flores. 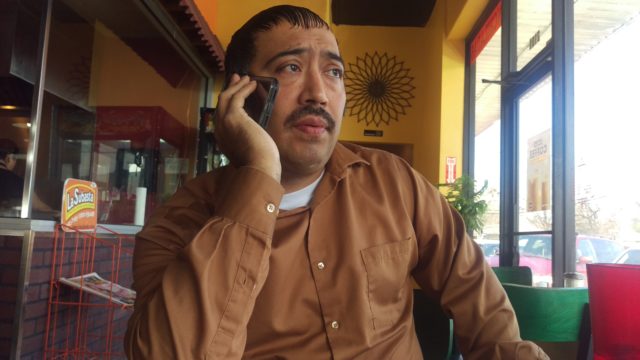 “If you aren’t at the table, you are on the table,” says Reverend James Caldwell, found-er of the Coalition of Community Organizations and a participant in the Healthy Port Communities Coalition. As the port expands, organizers are holding environmental justice trainings and engaging Port of Houston leadership in preventing pollution. Reverend Caldwell adds, “Change is inevitable but culture and identity doesn’t have to be lost. A lot of the residents have been there 30, 40, or 50 years. Properties are handed down generationally. We will be persistent and consistent in making sure that officials are thinking in terms of individual lives not just profits.”

At the end of the tour, you will see where industrial sites are being repurposed to enhance quality of life by the Buffalo Bayou Partnership. As the award-winning park system along the bayou is extended to the east, the city, nonprofits, designers, and residents are reimagining this landscape in a way that is healthier and better connected to jobs, parks, schools, and nature while preserving community, culture, and industry.

Get to know the vibrant community on the driving tour, below, that residents are fighting to protect. 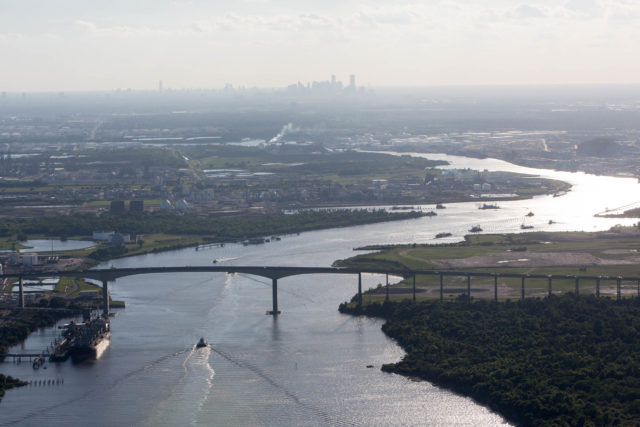 1. 610 Bridge (Sidney Sherman Bridge)
Most paths to the communities along the Ship Channel will take you over this bridge that gives you an unparalleled view above industry and residential neighborhoods along the channel. As long as you are not driving, look southeast beyond the Valero refinery and storage tanks for the oak trees lining the streets of Manchester.

2. Clinton Drive Monitor, 9525 ½ Clinton Drive, Galena Park
This ambient air monitoring station is owned and operated by the City of Houston as part of local efforts to bring about better enforcement of the federal Clean Air Act. One of the most comprehensive monitoring stations in the region, it samples for pollutants including ozone, particulate matter (PM10 and PM2.5), SO2, NOx, CO, and volatile organic compounds (VOCs). This site is in the historically African American side of Galena Park divided from the rest of the city by the train tracks to the east.

3. Taqueria Melissa’s, 2100 Clinton Drive, Galena Park
This local business is a nice spot to refresh yourself and take in the mix of shops, churches, and restaurants in older strip malls, which may not look like a Main Street and city square but serve a similar role. 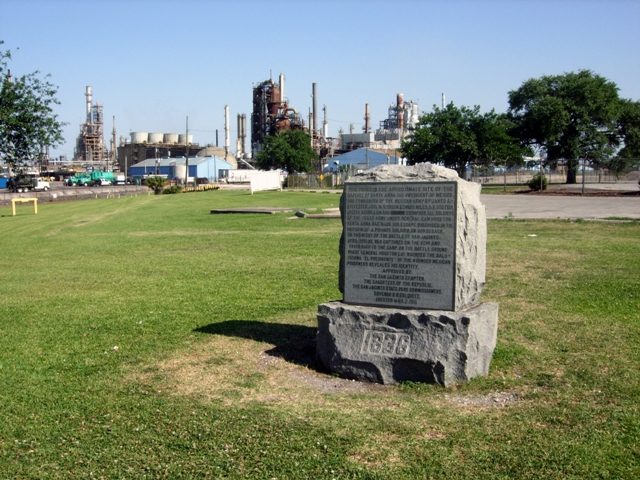 5. Historic Santa Anna Capture Site, Pasadena
The drive from Galena Park through the Washburn Tunnel will take you past a number of industrial sites and under the Ship Channel itself. On the other side is the historic site where General Santa Anna was captured bringing an end to the Texas Revolution in 1836. It is one of the most consequential places in North American history and one of the only publicly accessible places to see the Ship Channel up close. Next door to the east is Pasadena Refining, a 100-year-old refinery with a troubled history. 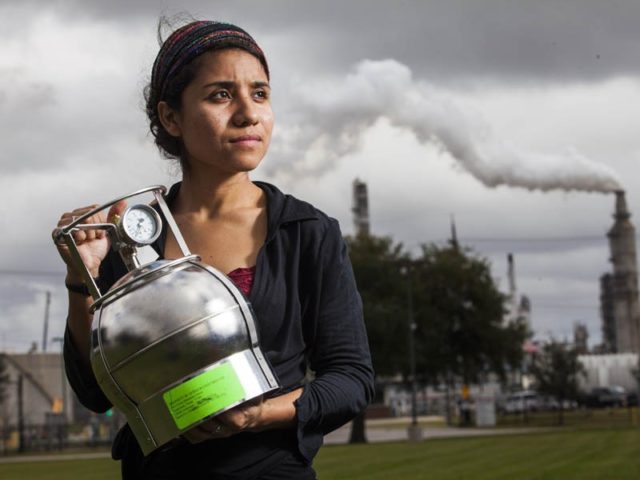 6. Hartman Park and Community Center, 9311 E. Avenue P, Manchester
From beneath the generous shade of mature oak trees at this park, you can appreciate both the appeal of living in Manchester and the high level of industrial exposure residents face with massive infrastructure on all sides of the community. Children play on the tennis courts or kick around soccer balls with the Valero Refinery in the backdrop. According to a report by the Union of Concerned Scientists, the airborne concentration of 1,3-butadiene, which causes cancer and a host of neurological issues, is more than 150 times greater in Manchester and neighboring Harrisburg than in West Oaks and Eldridge, relatively affluent neighborhoods on Houston’s west side. Since the mid-1990s, Juan and Ana Parras, co-founders of t.e.j.a.s., have advocated for the health concerns of Manchester residents and other parts of the Houston region. Notice the mural painted on the community center showing an idyllic park scene framed by highways and refinery towers shooting flames.

7. Yolanda Black Navarro Bayou Bend Nature Park, 2300 S Sgt Macario Garcia Drive, Houston
Buffalo Bayou Partnership worked with governmental agencies to convert this abandoned industrial property into a park that opened in 2016. The landscape architects SWA and its consultants found that the disturbed soils, an “unnatural” mix of sand and clay, were ideal to introduce a “natural” wetland. Ponds, a shade pavilion, and trails take advantage of old industrial detritus for walls, sculptural elements, and wildlife habitat. This site points to a complex future for areas along Buffalo Bayou and the Ship Channel. Community groups, nonprofits, and funders are not only working to mitigate serious environmental justice challenges but to substantially improve quality of life and manage growth in an inclusive way. Follow Navigation Boulevard to the west towards Downtown and you will see a mix of concrete crushing and metal recycling facilities, a new esplanade bursting with public art, and new luxury housing built in modest neighborhoods that have long welcomed immigrants from around the world.