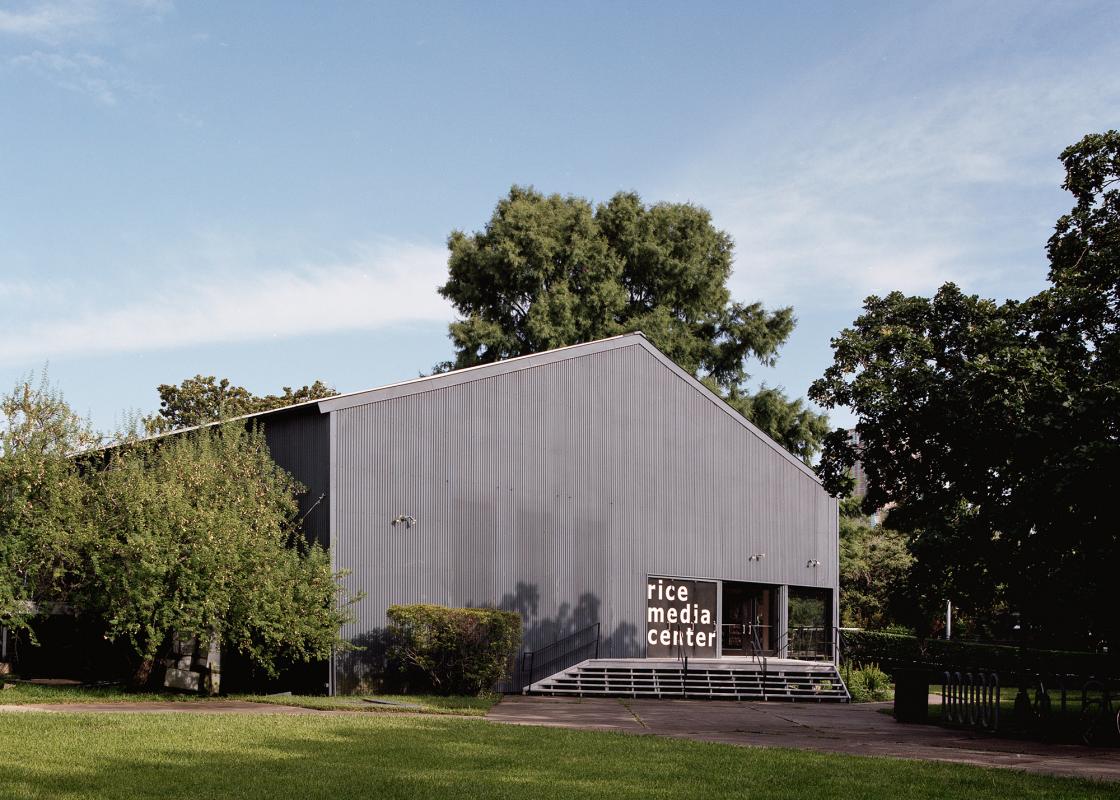 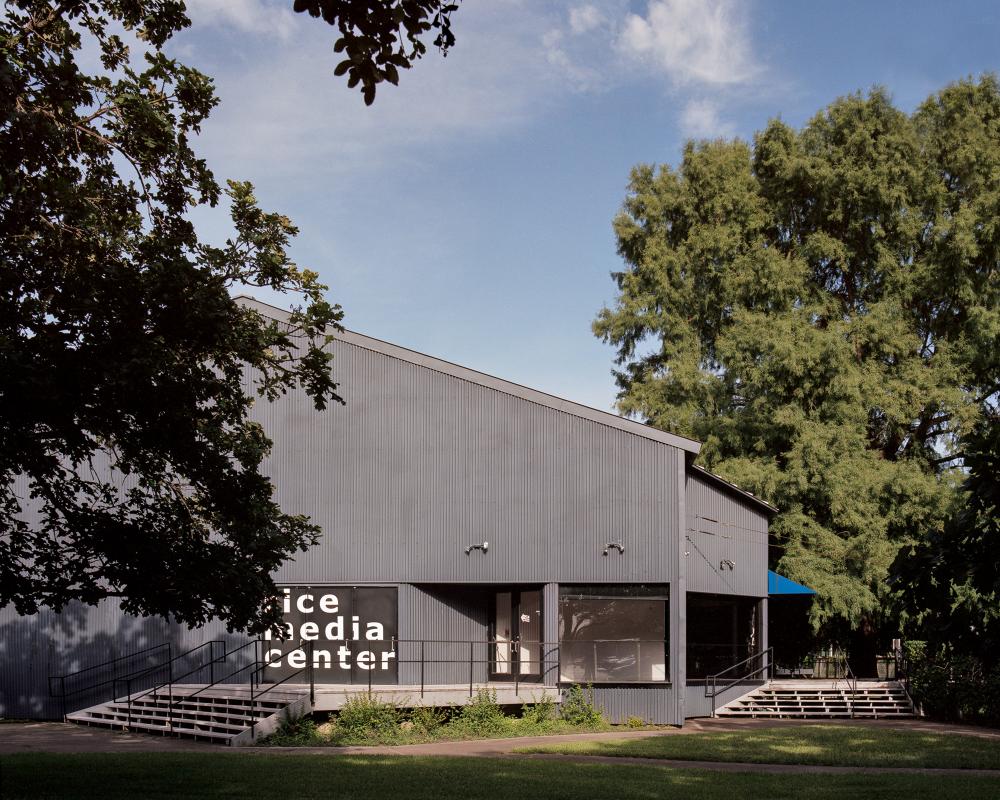 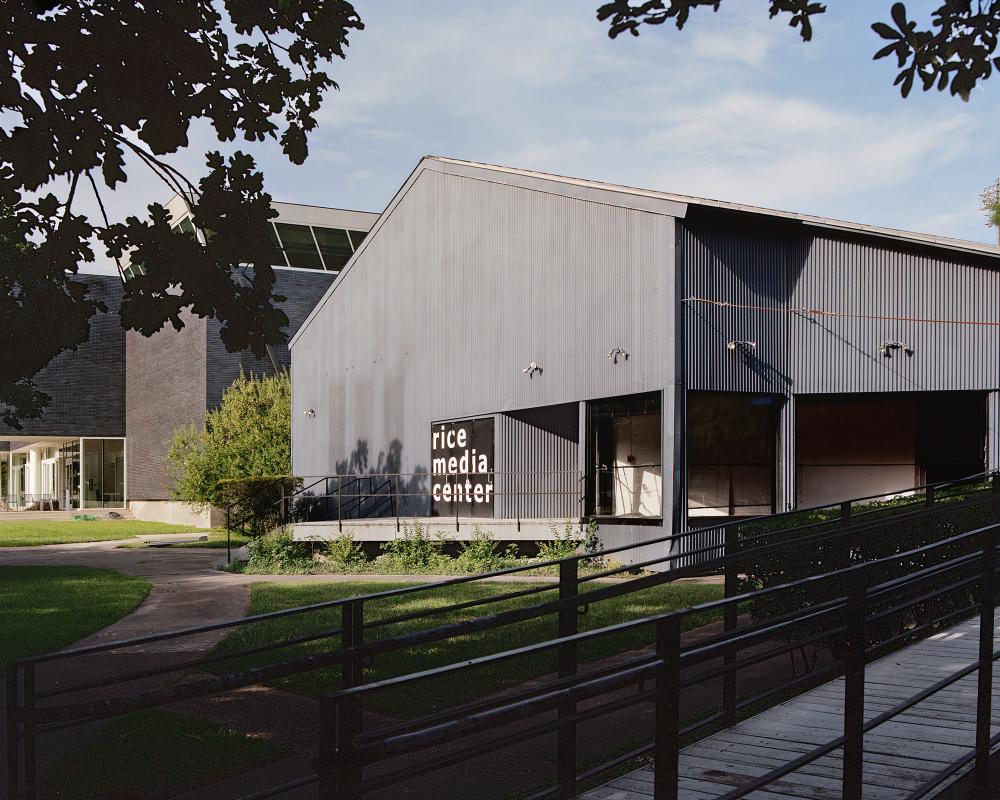 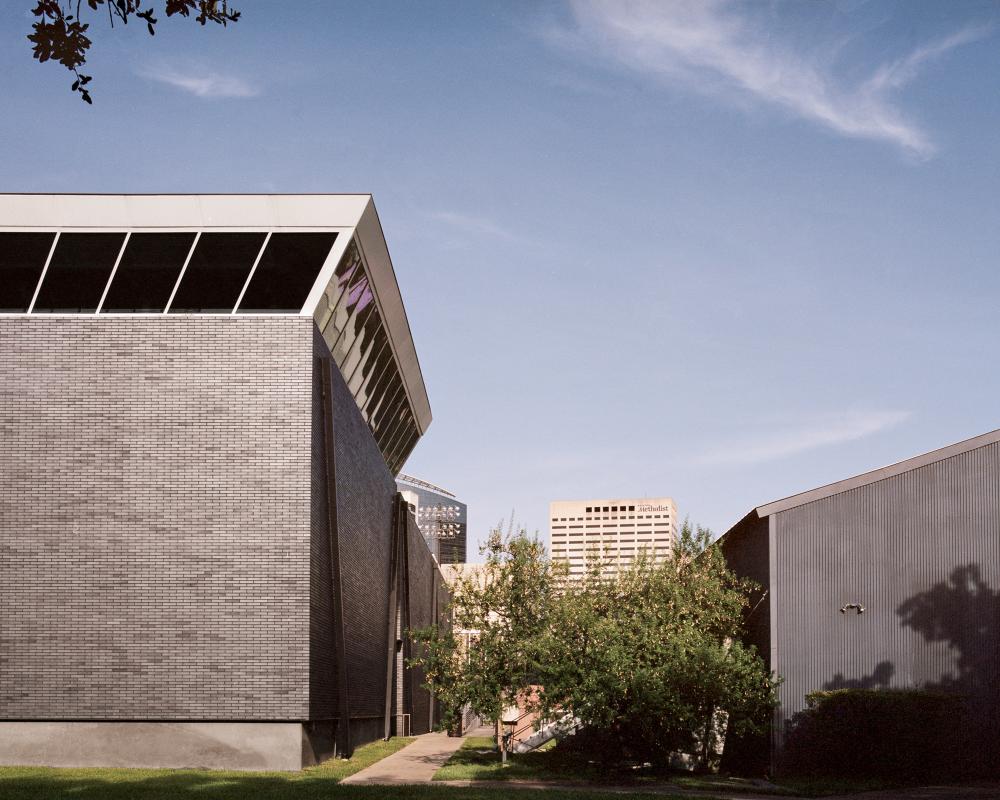 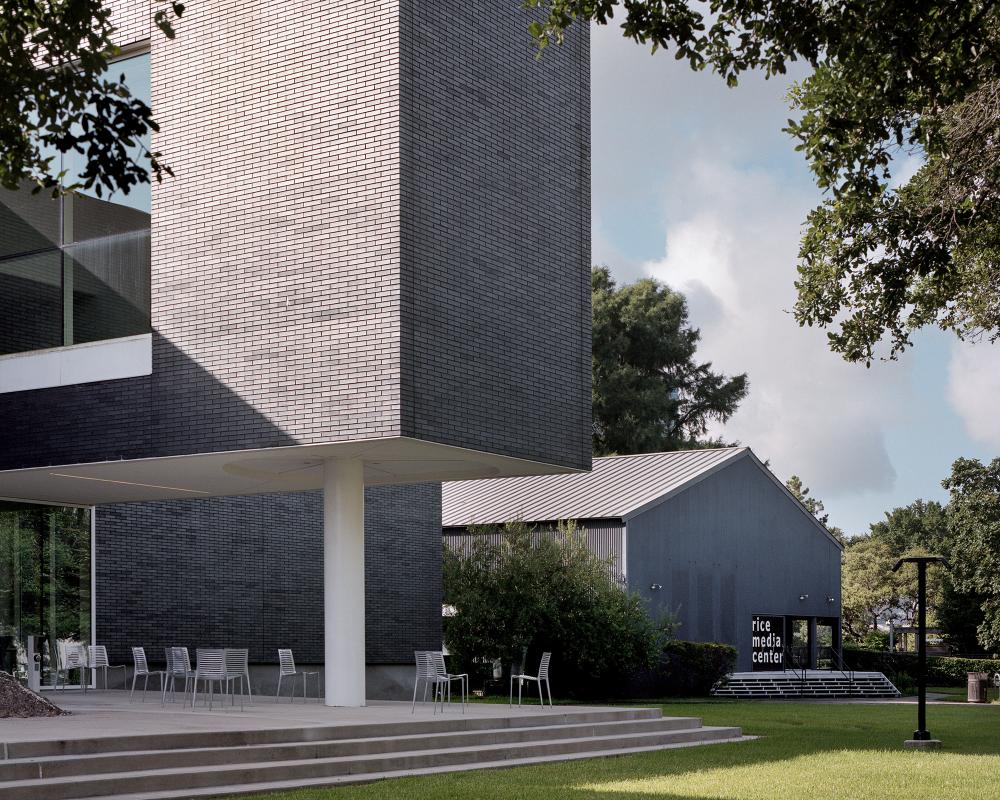 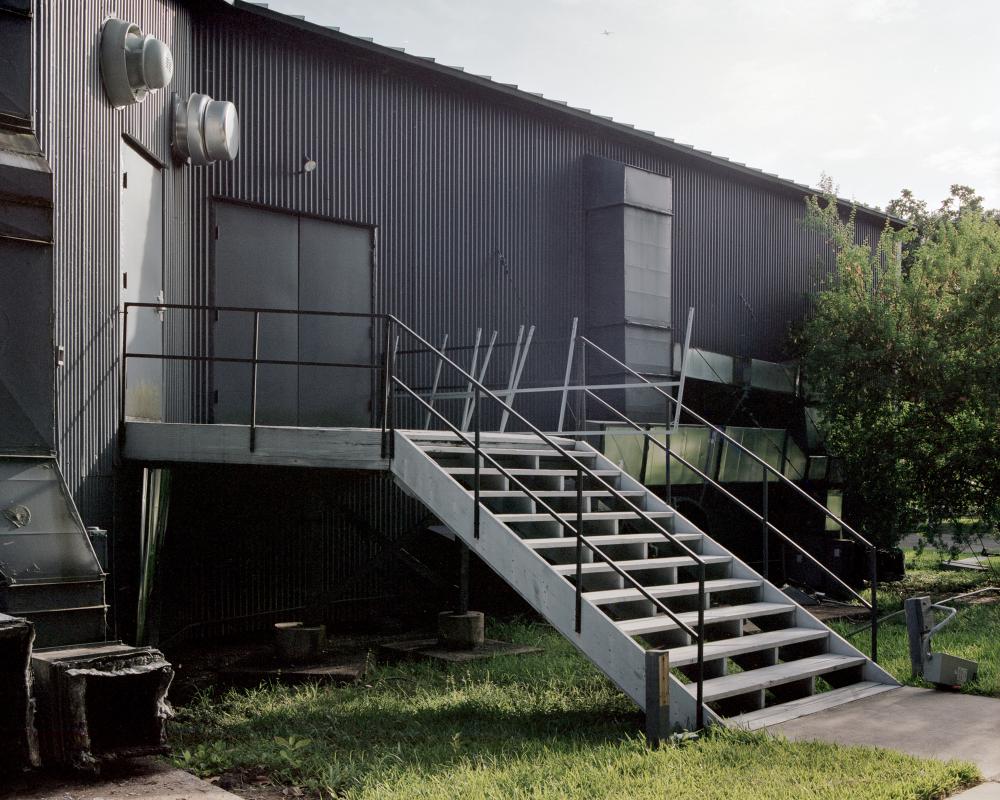 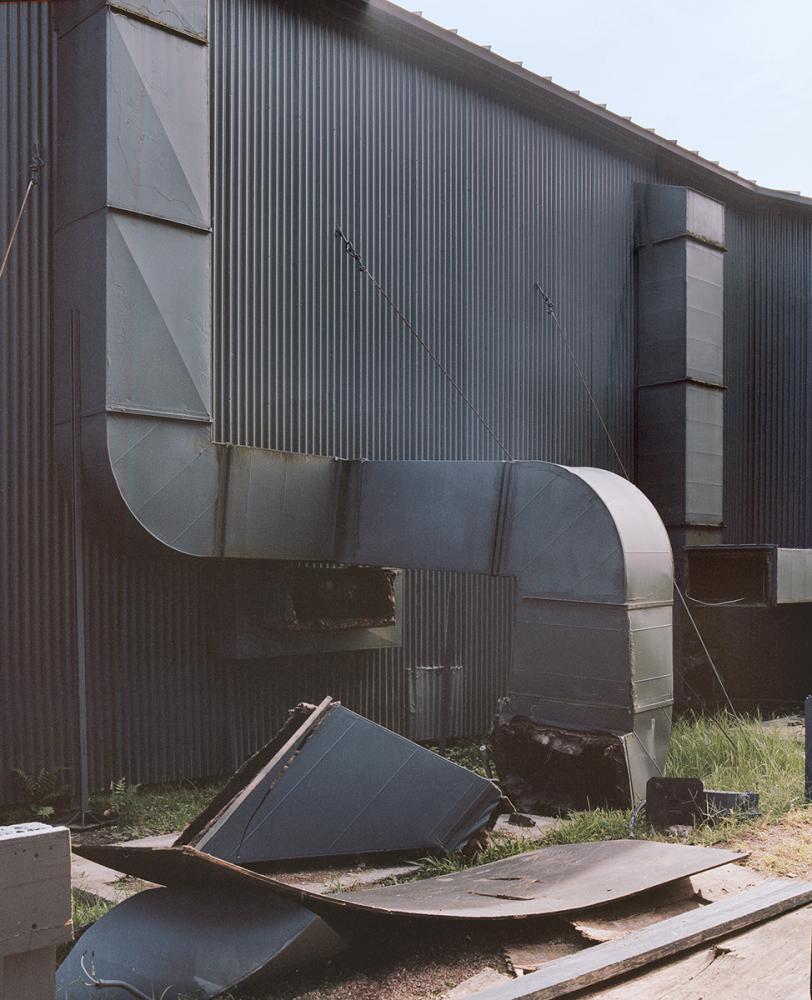 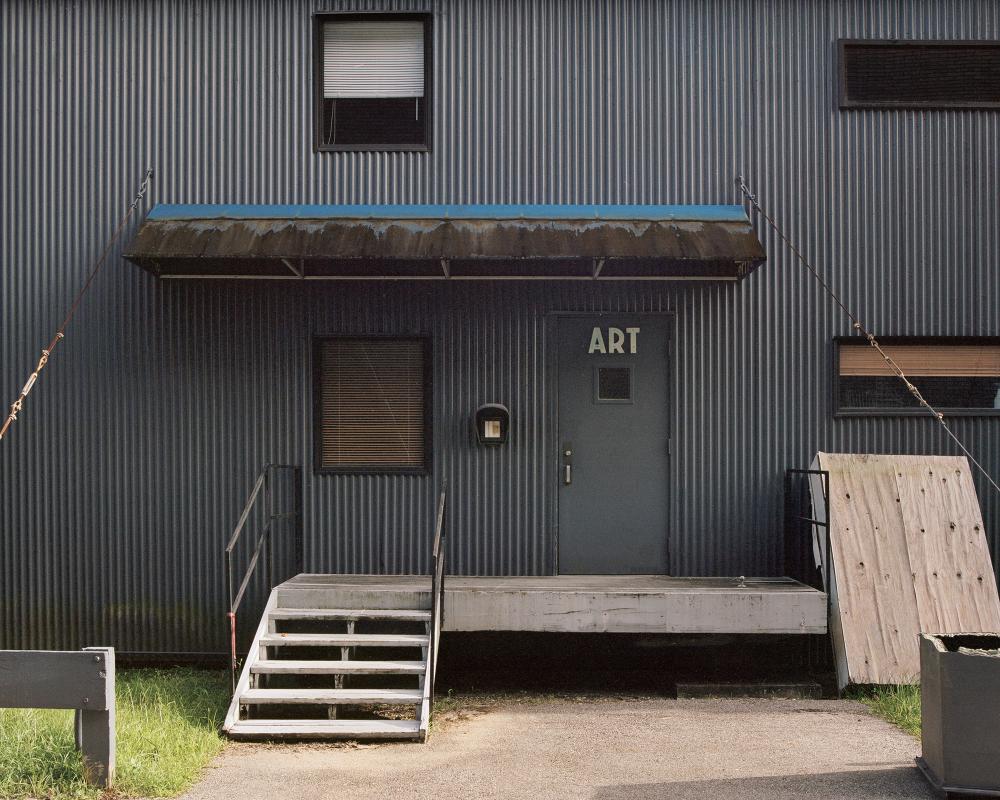 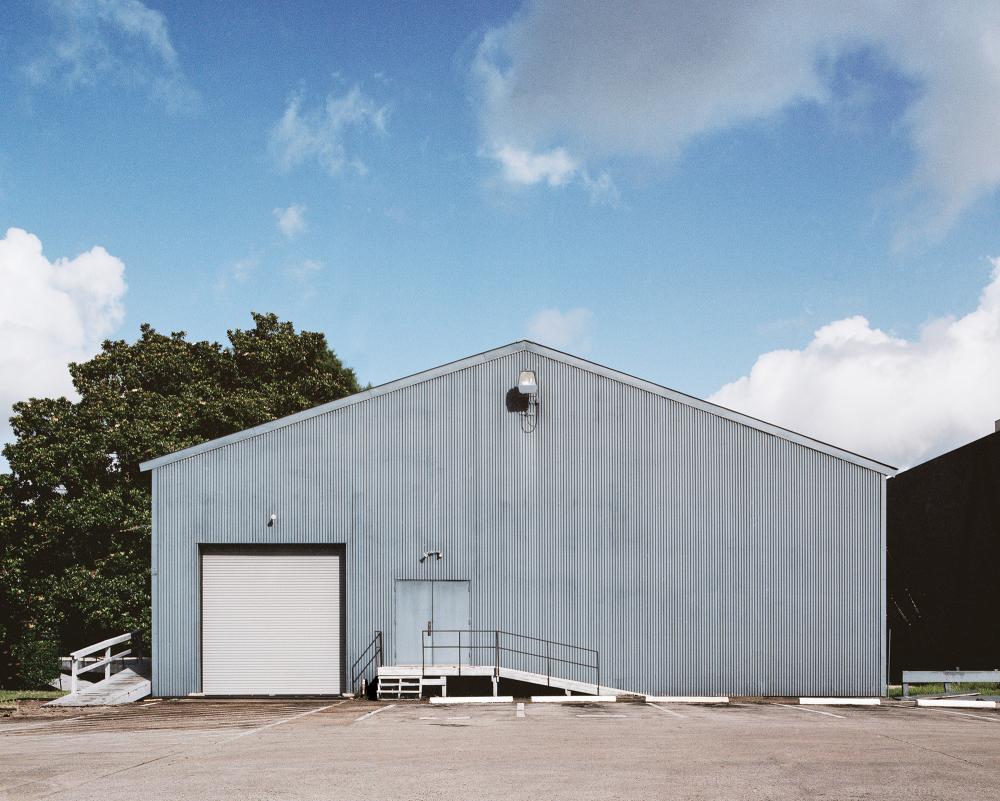 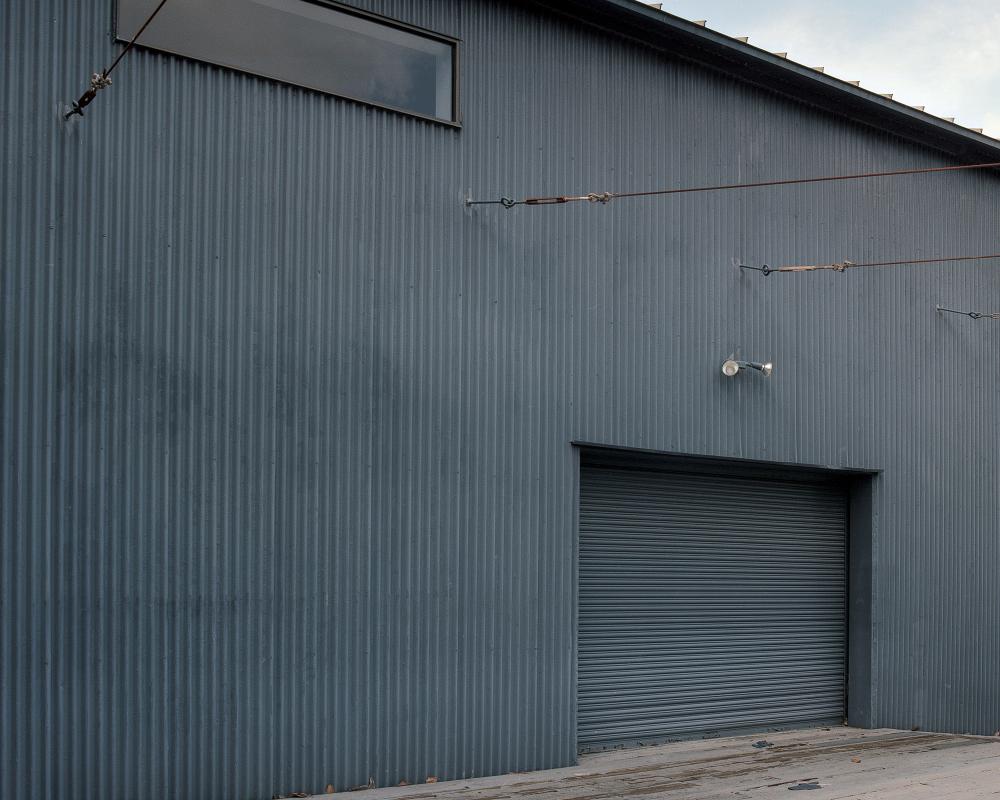 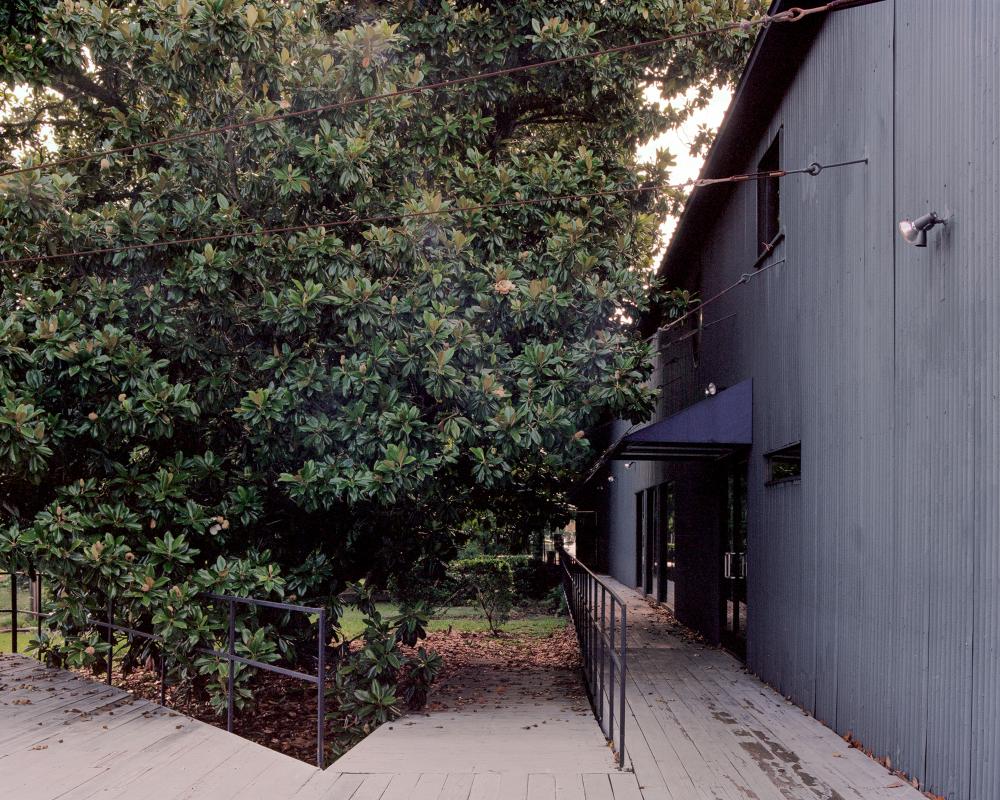 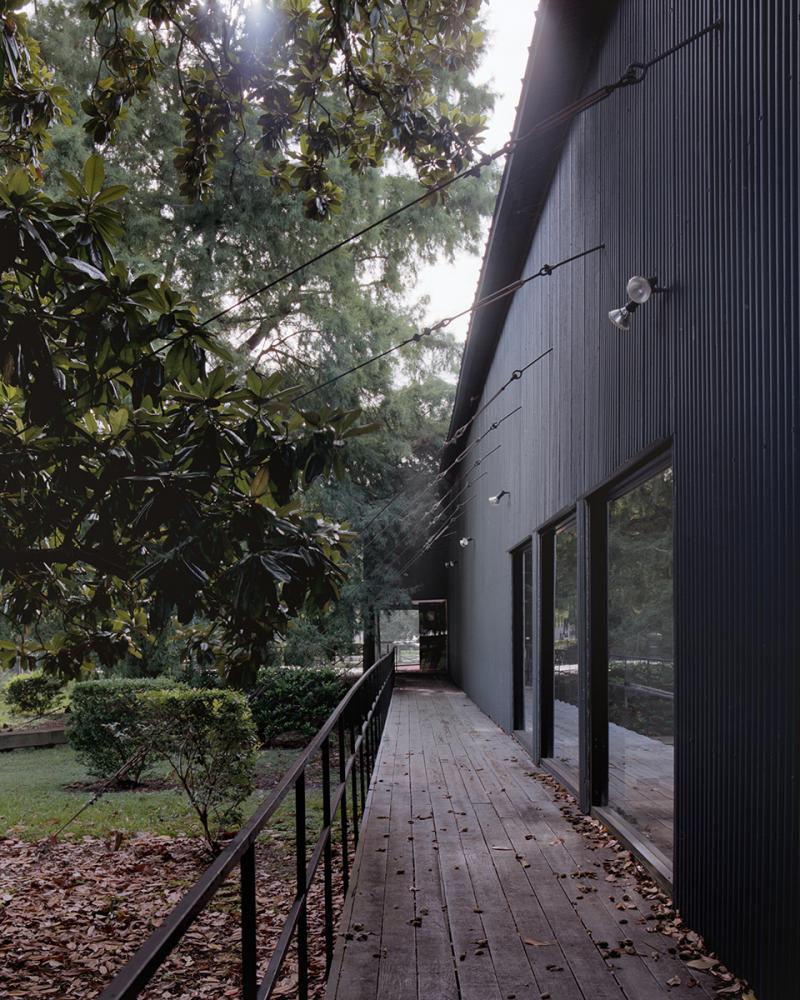 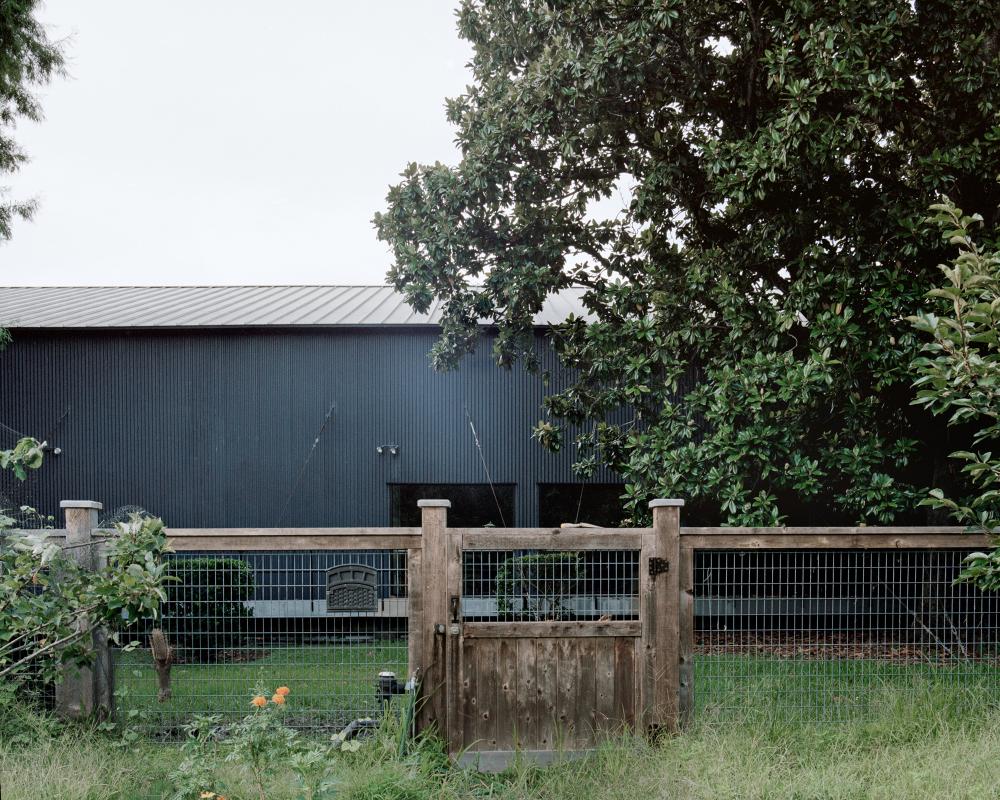 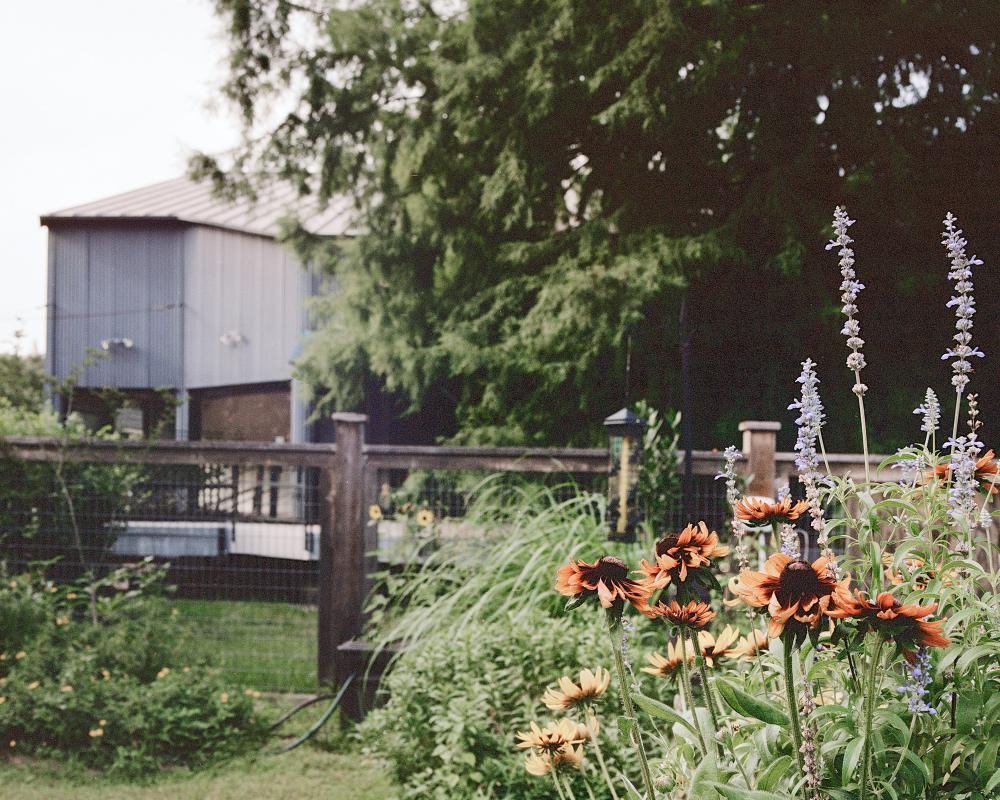 Leonid Furmansky photographed the Rice Media Center on June 25, 2021, using a Mamiya RZ67 camera and Portra 160 120mm film. Use the slideshow to view Furmansky's photographs. If viewing on a computer, clicking the image will open the slideshow in a shadow box gallery.

This is an exciting time for the arts at Rice University. The latest development, announced this spring, is a new building for the Department of Visual and Dramatic Arts (VADA). The project follows the founding and construction of the Moody Center for the Arts and the recent completion of the Brockman Hall for Opera. These efforts indicate a major commitment to the growth of the arts at Rice.

VADA’s new building is planned for the site where the Rice Media Center stood for fifty-two years. It was demolished earlier this summer. As such, a certain sadness for the loss of the Media Center hangs in the air, particularly for those of us who worked and taught courses in the building for so many years, as well as for the thousands of Houstonians who visited the campus for film screenings, photography courses, and exhibitions. A major part of that sadness is the inevitable feeling of loss that comes with the passing of a place that was the site of so many memorable events and celebrations over half a century. But some of that sadness may be attributable to the unceremonious removal of the Media Center, a final reminder that two generations of university authorities wanted it gone, failing to appreciate, even in the end, the significant role that it had played in the growth of the arts in Houston and all that had been accomplished there.

When the Institute for the Arts and the Media Center appeared on the Rice campus in 1969 and 1970, respectively, the reaction from university officials was largely disgust. (The Institute for the Arts, or the “Art Barn,” was demolished in 2014 ahead of the construction of the Moody Center for the Arts.) Both buildings were deemed common structures, eyesores, unfit for the dignity of the Rice campus. It didn’t matter that the design of these humble “tin buildings” forecast a major direction in architecture nationwide, that they made authentic reference to American vernacular buildings, or that they functioned perfectly for the purposes for which they had been built. The only thing that allowed these structures to remain standing was that they had been approved as “temporary” buildings. Thus, the presumption was that they would soon be gone.

How the Media Center came to exist on the Rice campus is a remarkable story of patronage, academic priorities, and timing. In 1969, Houston art patrons Dominique and John de Menil  ended their long-standing support of the arts at the University of St. Thomas and relocated these operations to Rice. This extraordinary move included the transfer of the full faculty, staff, and facilities of the distinguished art history department they had underwritten at St. Thomas, as well as the Media Center, which they had recently founded to develop innovative curricula and community programs in photography and filmmaking. These individuals and initiatives merged with Rice’s fledging Department of Fine Arts, more than tripling the number of its faculty and vastly expanding its operations. At the time I was teaching at St. Thomas, so I too joined Rice during the summer of 1969.

Dominique de Menil’s greatly admired art exhibition program also moved to Rice, so a new building needed to be built immediately. Architects Howard Barnstone and Eugene Aubry were commissioned to design the building, officially known as the Institute for the Arts. Their design for a wood frame building with a corrugated metal skin was constructed in just ten weeks, finishing in time for the planned opening of the Jean Tinguely exhibition The Machine as Seen at the End of the Mechanical Age, co-sponsored by the Museum of Modern Art (MoMA) in New York. Suddenly, and seemingly out of nowhere, the Institute for the Arts and Rice University were on the map of prestigious art venues.

As the Institute for the Arts was under construction, Barnstone and Aubry designed the Media Center in the same style and the building was built similarly. The first photography and film classes were taught there in January of 1970.

Despite the harsh reaction to the appearance of the buildings, both the Media Center and the Institute for the Arts drew the arts community to the campus in great numbers. The Institute for the Arts brought a steady stream of important shows and artists to Houston, from Andy Warhol (Raid the Icebox) to Larry Rivers (Some American History). The Media Center initiated a film series and screened classic and contemporary films four nights a week. Beginning in the fall of 1970, the photography section of the department mounted shows in the Media Center gallery. The first show was a selection of photographs by the great French photographer Eugene Atget, which was the first showing of his work in the US outside of New York and was realized a decade before his landmark exhibition at MoMA. The Atget show was followed by exhibitions of the work of Lee Friedlander, Garry Winogrand, Harry Callahan, Robert Heineken, Aaron Siskind, Harry Callahan, and the first Houston showing of the work of Nan Goldin.

During those early years, the influence of the de Menils was always present. There was a sense, with the Institute for the Arts so close, that anything could happen. That feeling of endless possibilities was confirmed one day in the spring of 1972, when the Media Center had an exhibition of about fifty black and white prints hanging in the mezzanine gallery. They were made by two current Rice students, Josh Pailet and Scott Coburn. The pair had traveled to New Orleans earlier that spring to photograph Mardi Gras festivities; they had done excellent work, especially for undergraduates, so we had a show. One day Dominique de Menil was walking through the Media Center and the show caught her eye, so she took the time to have a close look. Shortly after, she found me in my office and asked about the photographers who had done the show. I told her their names, that they were Rice students, and she asked for their phone numbers. That night, Josh called me to tell me that Mrs. de Menil had called to purchase the entire show for the de Menils’ collection. Josh and Scott were among the very first photographers to enter their collection, along with Alfred Stieglitz, Paul Strand, and Ansel Adams.

The design of the Media Center wasn’t based on the connoisseurship of photography and film, but on the fact that work would be done there, courses that would be taught (both to Rice undergraduates and to the community at large), and that photographs and films that would be shown to the university community and to the public. The building was designed not as a monument to high art but as a place to work and to learn about art.

Important exhibitions spanning the history of photography to contemporary trends hung in the Media Center years before any other Houston institution hosted photography exhibition or initiated collection programs. From the 1970s onwards, the filmmaking curriculum, public film screenings, and other community programs established the Rice Media Center as the hub of the filmmaking community in Houston.

Yet from the beginning these programs struggled for appropriate recognition within the university and even within the art department itself. I recall a lunch meeting of the art department faculty in the spring of 1972, the third year of the Media Center’s existence. The art historian Mino Badner, chair of the department at the time, sat across the table from James Blue, the brilliant documentary filmmaker who taught and directed film programs in the Media Center. Badner, like James and I, had joined the Rice faculty three years earlier, after the de Menils relocated the operations from the University St. Thomas. (I suspect that Badner and his art history colleagues must have been feeling some disappointment, even envy, as they watched ever-increasing de Menil funding go to filmmaking programs in the Media Center.)

That day, Blue was talking about new filmmaking activities in the Media Center when Badner fired a question across the table at him: “Do you have any idea, James, how much paper and how many pencils we could buy for our drawing classes with just one percent of the money you are spending every year on filmmaking?”

I winced, but Blue replied in a blink of the eye: “Do you understand, Mino, that we are inventing the paper and the pencils of filmmaking?”

I doubt that Badner or any of the art historians—or any faculty or administrator at Rice, with very few exceptions—would have understood at the time that Blue was not overstating the case. For he was, indeed, leading the Media Center into an area of technical research and innovation with the potential to make documentary filmmaking available to the masses.

Up to that point, the only accepted technique for shooting documentary films was double-system recording, which required a 16mm Éclair or Arriflex camera running in sync with a Nagra tape recorder. The cost of that equipment, at the time, was over $30,000, which put serious filmmaking out of reach of all but a privileged few. On top of that, the production costs for a finished film on 16mm averaged a thousand dollars a minute. In due time, video would change all this, but at this moment the best video was of such poor quality that it was unusable. So Blue had, with de Menils’ support, struck out in a daring new direction.

Blue hired a small crew of talented electrical and mechanical technicians led by the genius A. C. “Ace” Conrad and charged them with what most considered an impossible task: to modify inexpensive amateur Super 8mm film cameras to synchronize with ordinary cassette tape recorders. The goal was to reduce the cost of filmmaking to a tiny fraction of the prevailing costs, thus making it affordable for virtually anyone to make a film with synchronous sound. On the surface, it was an outrageous idea, but after a year or so of experimentation, the group’s modified Super 8/cassette outfits were being checked out to Rice students and community filmmakers around Houston, creating a wave of films on a wide variety of subjects that were screened at the Rice Media Center.

As the photography section of the department grew, the Rice Media Center building was adapted to meet new demands. The wood framing and sheetrock construction of interior walls made it relatively easy to modify working spaces. When courses in color photography were added to the curriculum in 1984, spaces for color darkrooms and processors were carved out. As digital imaging began to dominate the medium more than a decade later, a digital laboratory was built by modifying what had been storage and construction space. Time and again over the years, the main gallery of the building was modified to accommodate large scale exhibitions, such as Photography into Sculpture exhibition, which also appeared at MoMA.

Those of us who worked and taught in the building grew to love it, not only because it was functional, but because it adapted so readily to whatever we needed it to be.

We can hope for that. We can also hope that the design of the new building will foster an atmosphere of creative energy and innovation, like the one supported by the Rice Media Center from its earliest days until the very end.