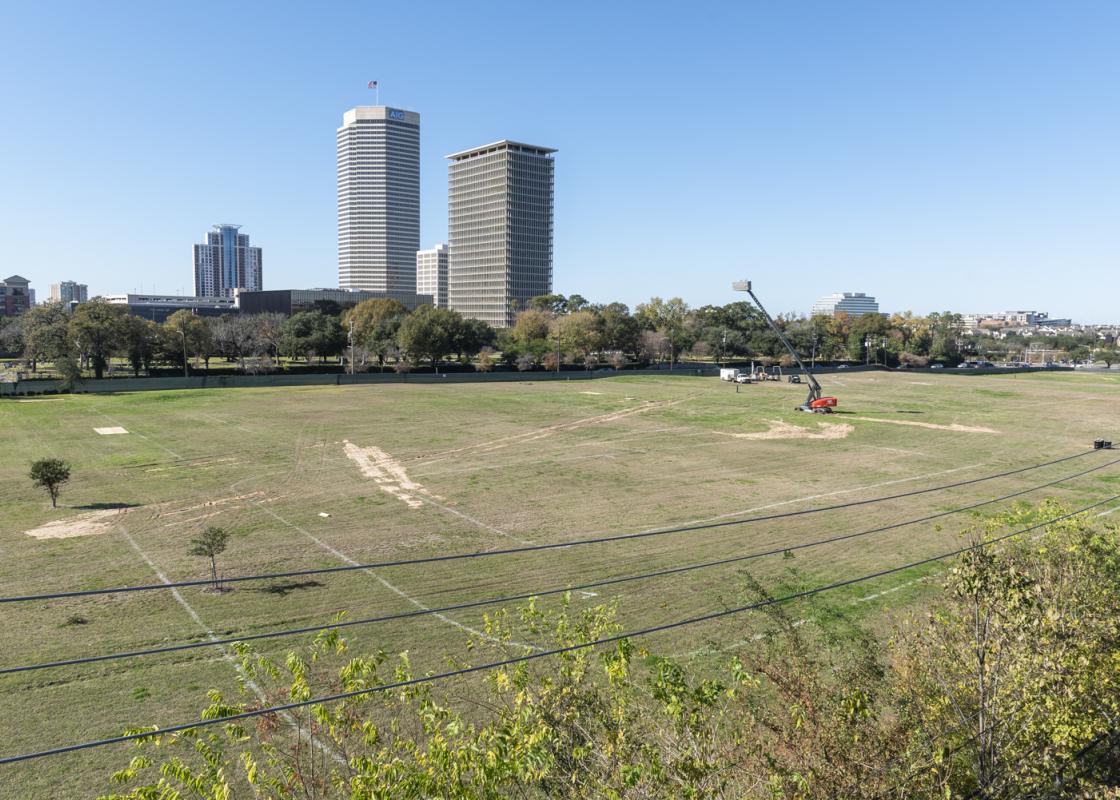 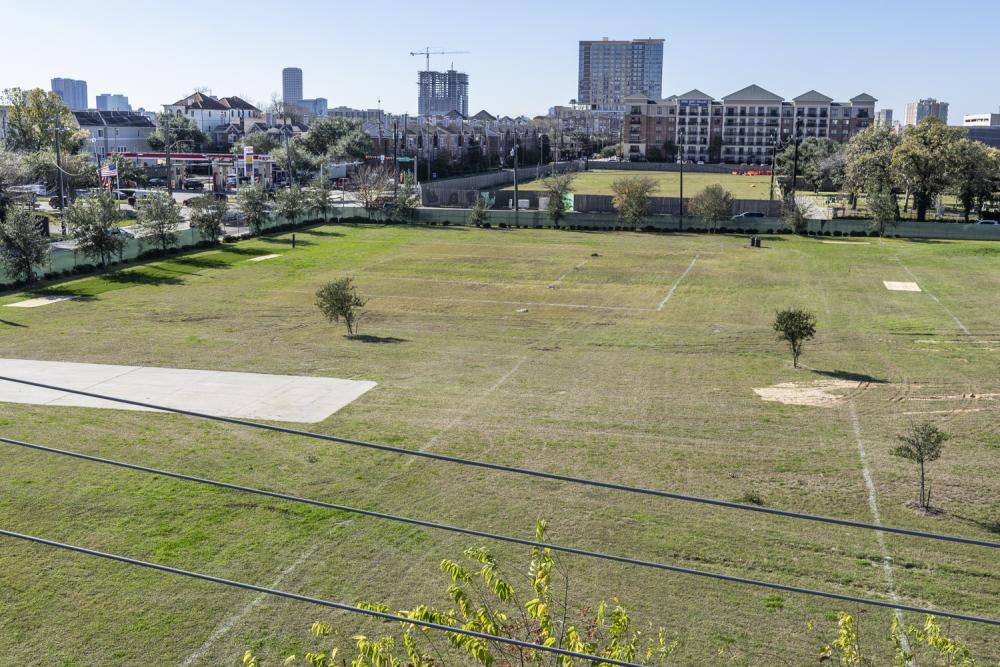 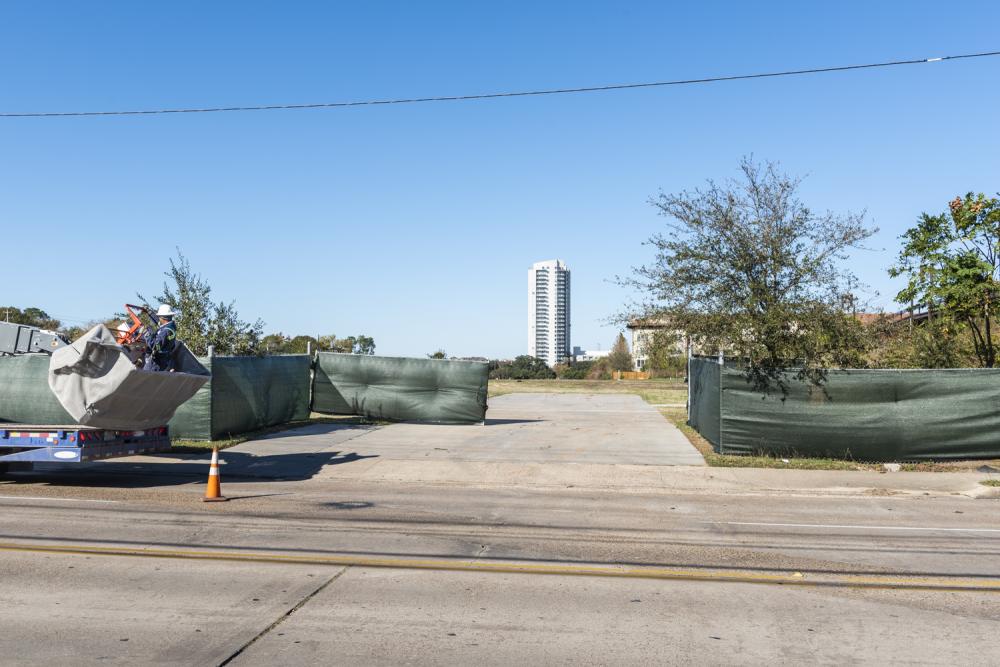 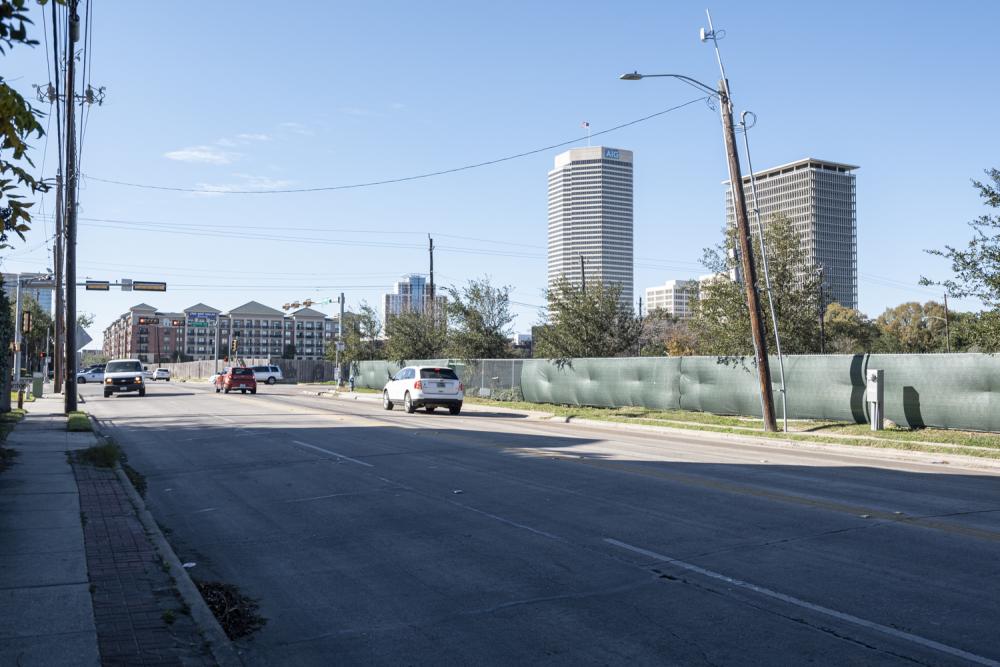 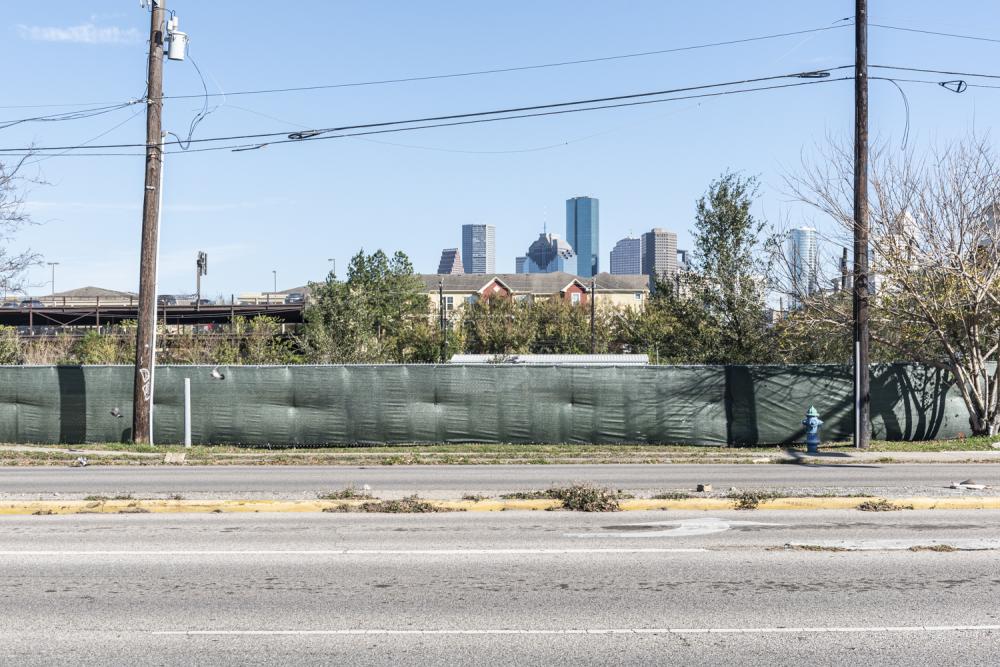 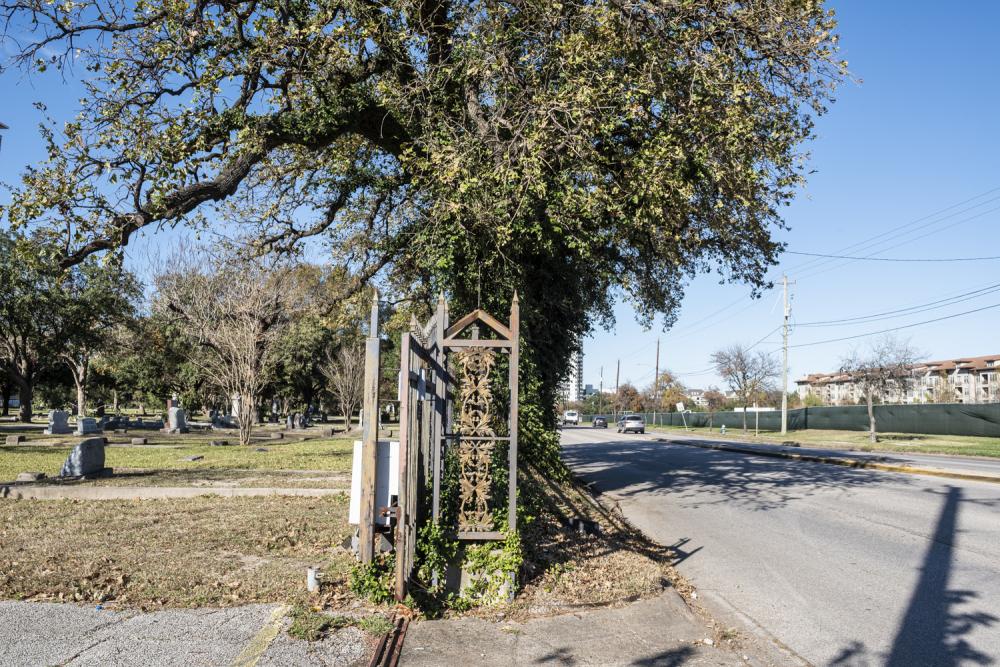 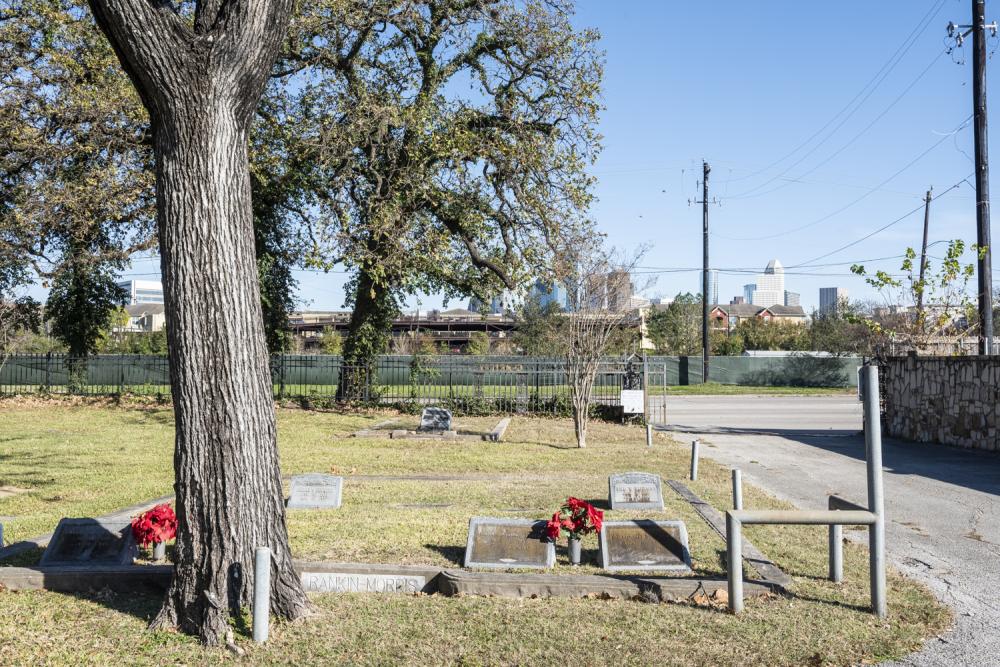 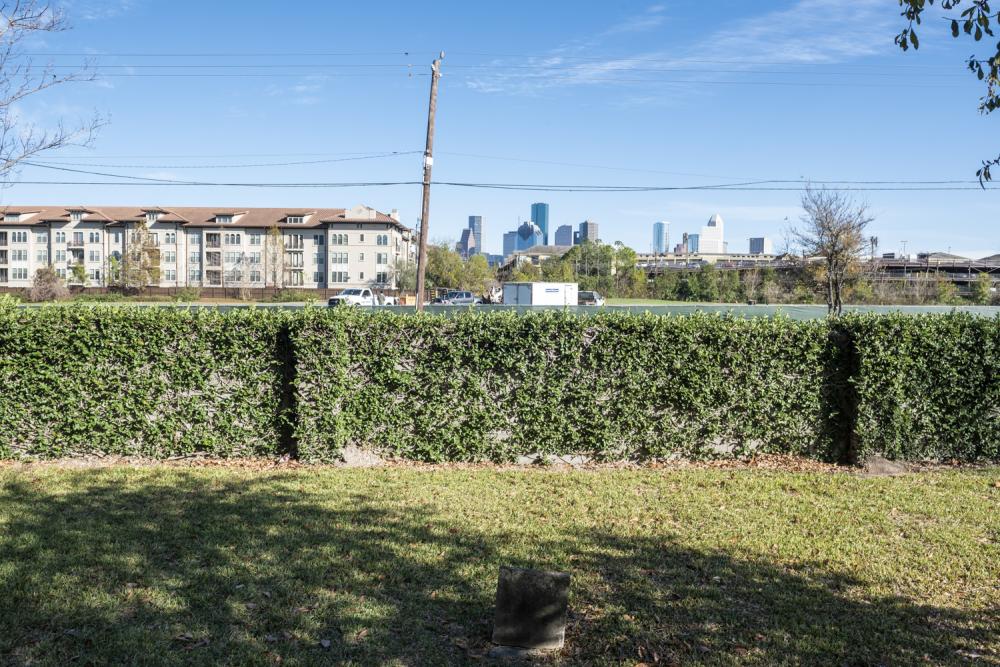 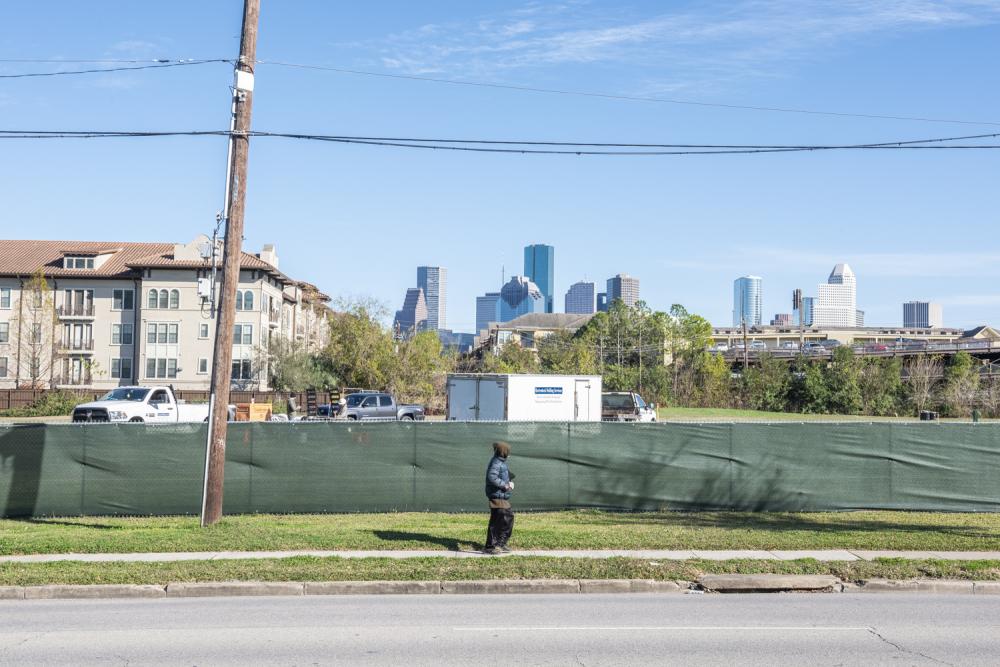 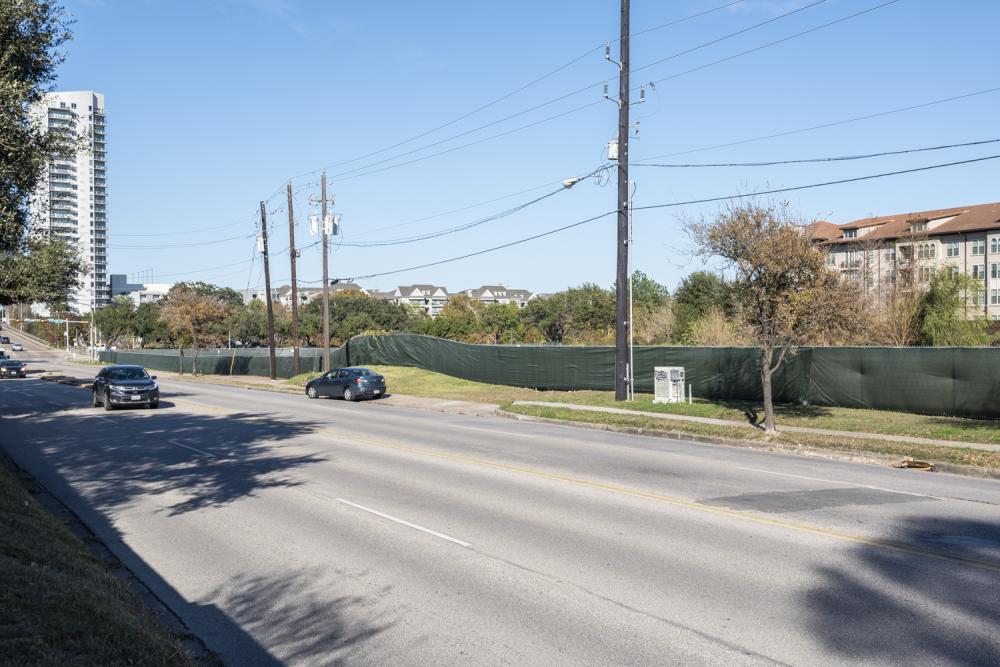 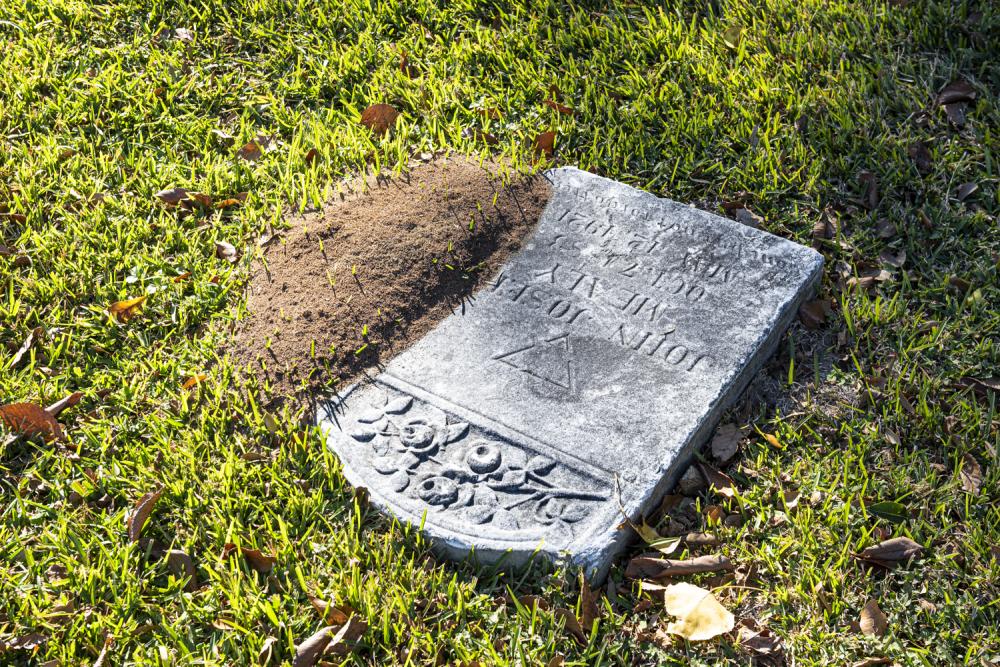 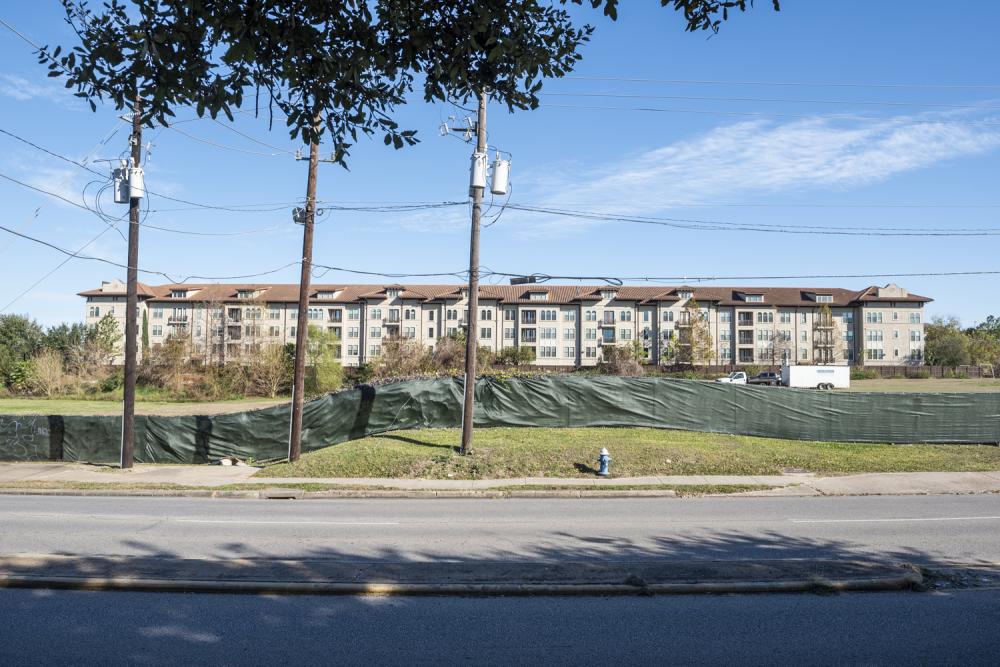 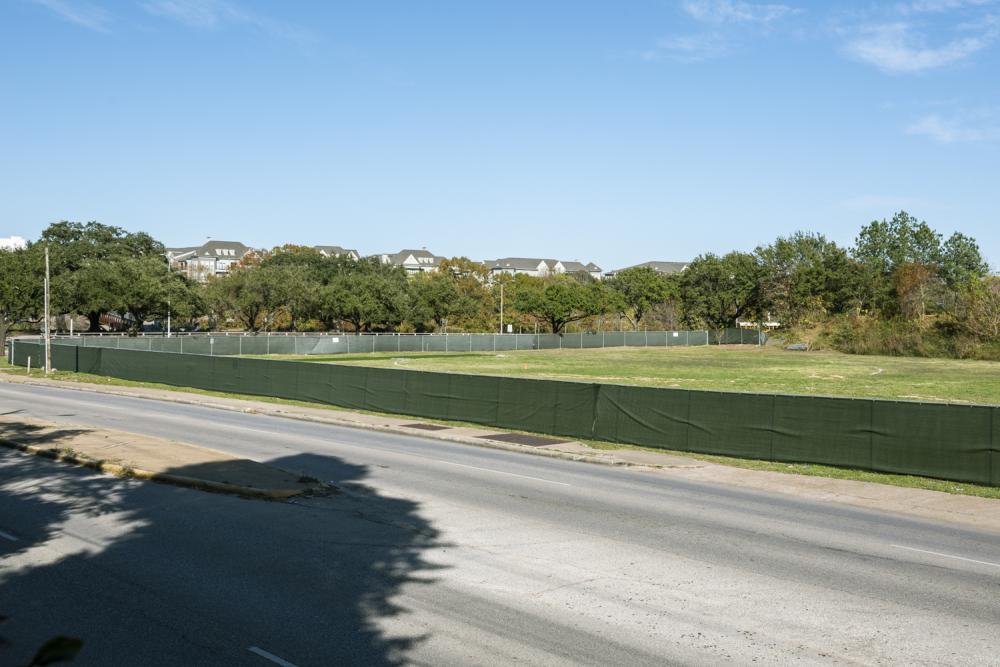 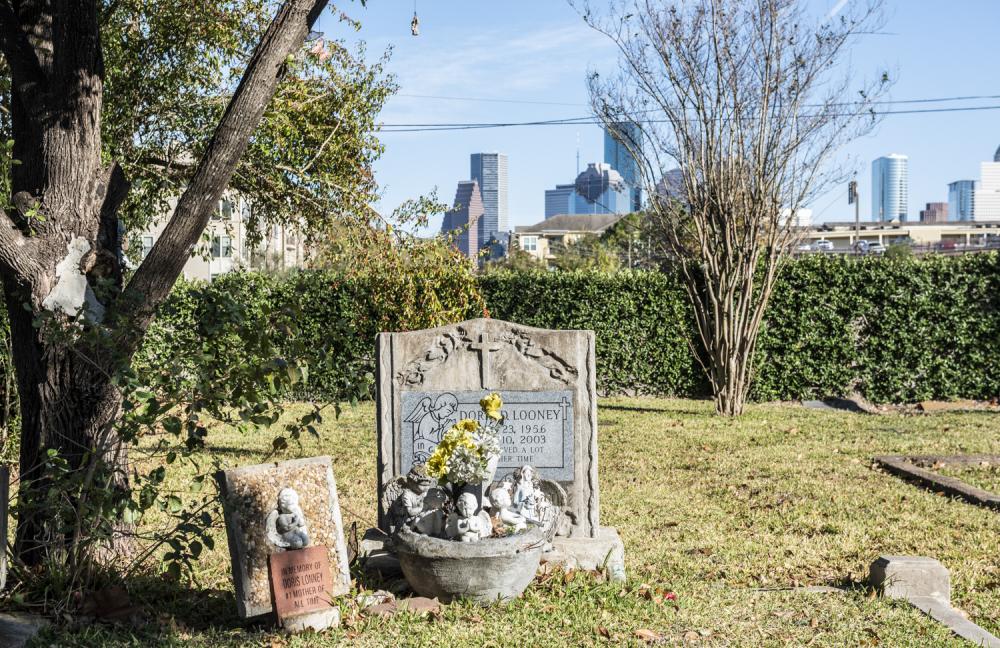 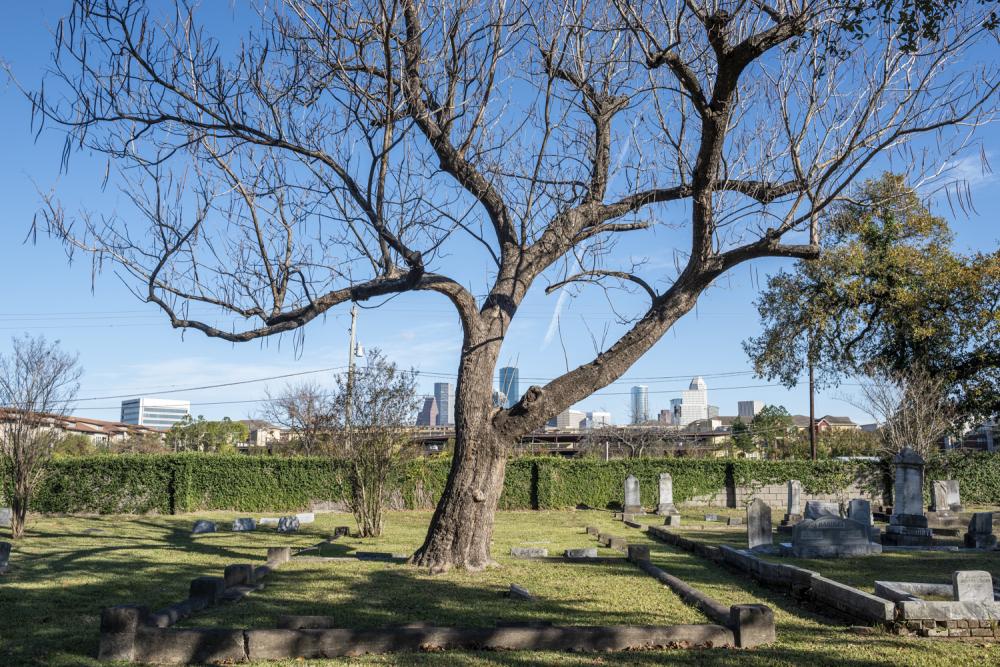 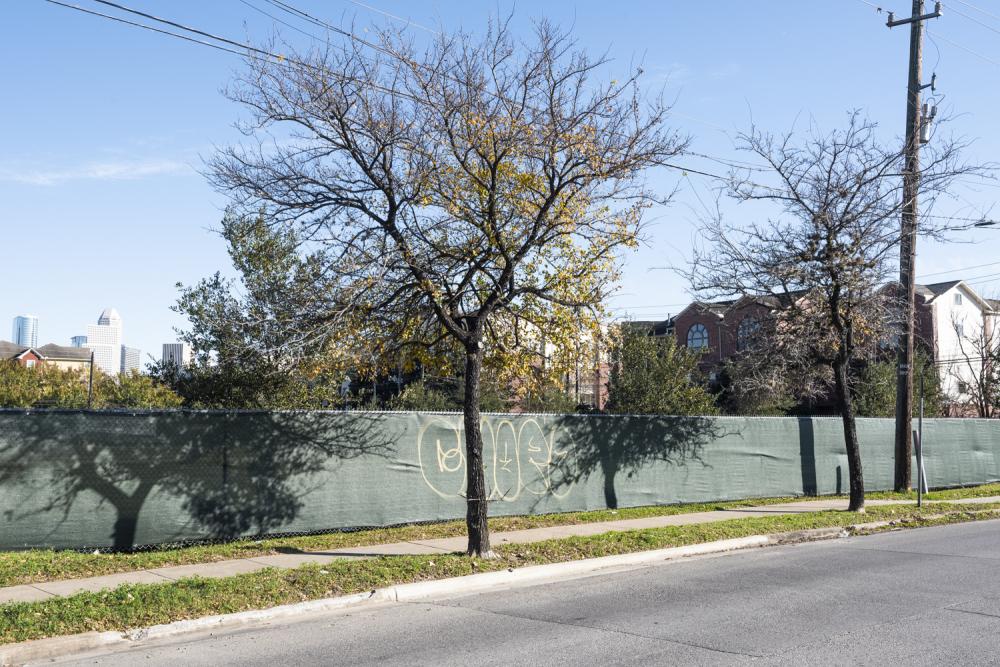 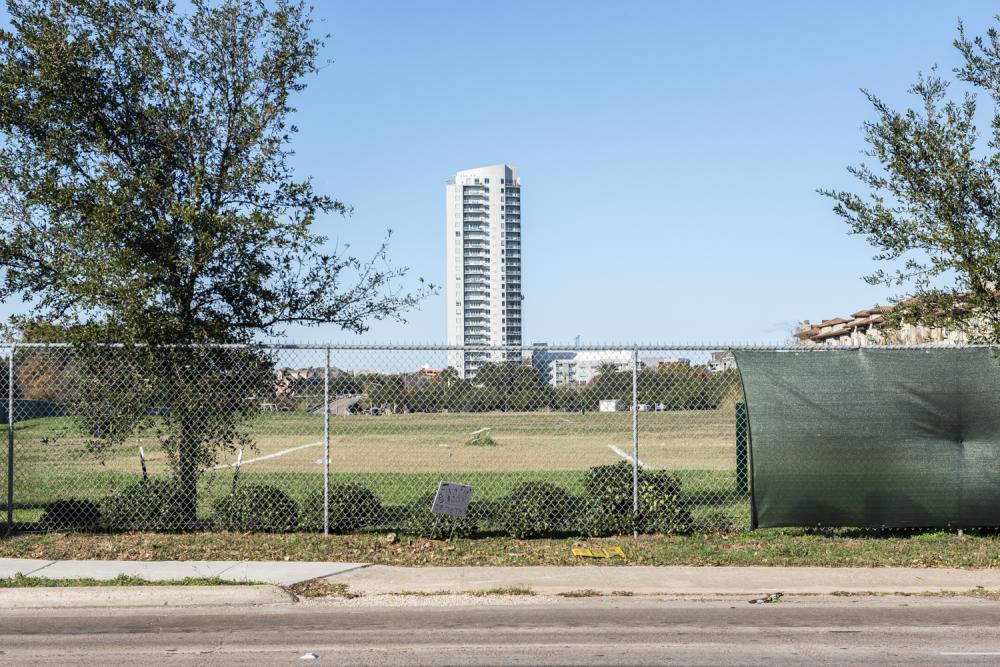 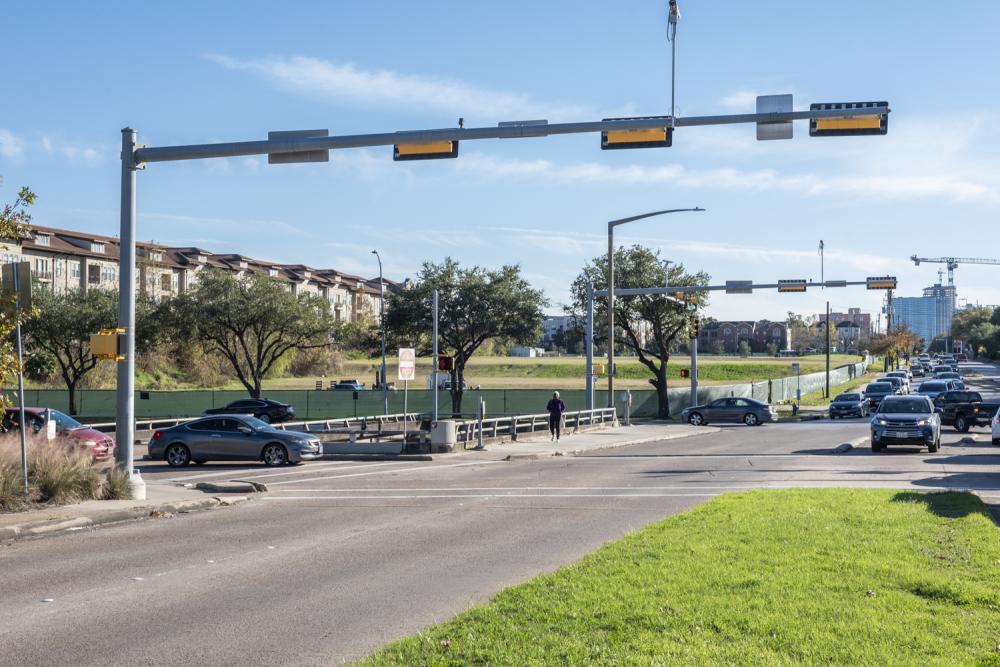 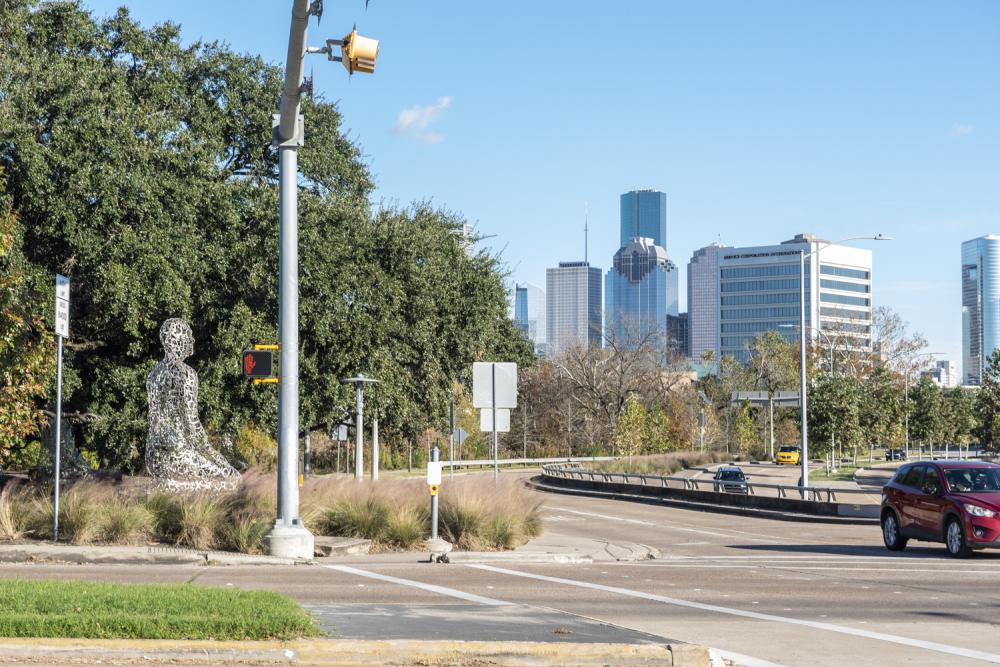 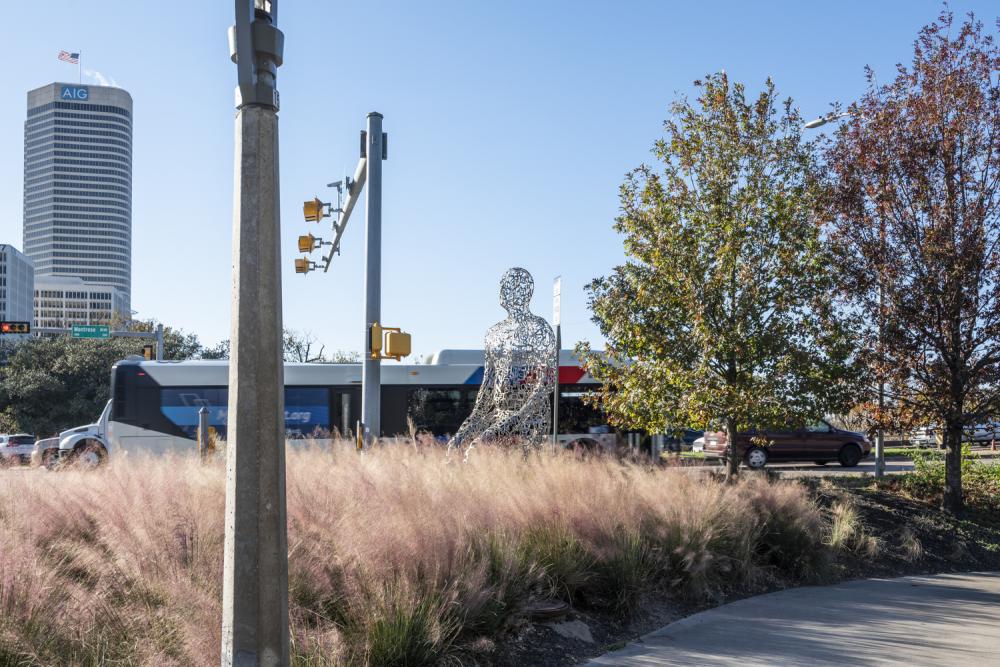 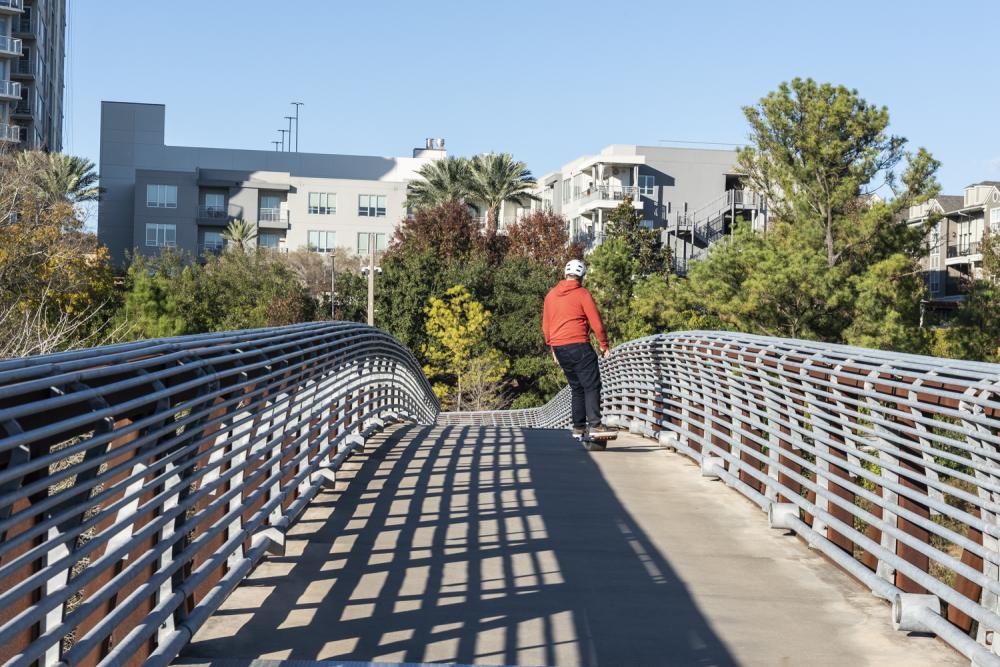 Use the slideshow to view Hester's photographs. If viewing on a computer, clicking the image will open the slideshow in a shadow box gallery.

Along Montrose Boulevard, a long rectangle of land slopes down to Buffalo Bayou. To the east are two large apartment complexes; to the north across Allen Parkway, paved trails and the Rosemont Pedestrian Bridge; to the south, Aqua Hand Car Wash and Detail.

This parcel in question appears on Google Maps as a Park, but today it is fenced off. The site is slated to become the Ismaili Center Houston. The Ismaili community is a group of Shia Muslims numbering between twelve and fifteen million globally who are led by the Aga Khan. The community also operates North American centers in Toronto and British Columbia. In Houston, there are an estimated 40,000 members of the Ismaili Muslim community. Last year an Ismaili jamatkhana, meant for gathering and prayer, opened in Spring, north of Houston. According to a news item, “the 26,000 sq.ft building sits on 7.74 acres of land and its design was inspired by and conceived with reference to the local Texas environment and the varied backgrounds of the Ismaili community, [their] history, and expressions of [their] faith.”

While the Aga Khan Foundation acquired the land in central Houston in 2006, nothing has been built. In 2011, seven sculptures collectively titled Tolerance by the Spanish artist Jaume Plensa were installed along the bayou adjacent to the land, funded by the City of Houston, Mawlana Hazar Imam (Aga Khan IV), and a few private donors. In 2018, during a visit to Houston as part of the Diamond Jubilee, Hazar Imam “confirmed his plans to build a high-profile centre in Houston.”

After an invited competition (which included OMA, Studio Gang, and David Chipperfield Architects), Farshid Moussavi Architects, led by Farshid Moussavi, was selected to design the complex, estimated at about 215,000 square feet. (The land itself is almost 483,000 square feet). The project team includes Nelson Byrd Woltz (responsible for improvements to Memorial Park and the new campus of the Rothko Chapel), structural engineer Hanif Kara of AKT II, and DLR Group. Hazar Imam visited the site in 2019 as part of an American tour and met with Moussavi and Thomas Woltz, in addition to meeting with Mayor Turner.

In prior coverage, former Rice Architecture Dean Sarah M. Whiting said that this project “will put [Moussavi] on the map.” Whiting also remarked that it’s notable to have a woman lead the design, as there are few prominent buildings in the city designed by women. Seen in a larger context, the center is important as it will, according to Whiting, establish “a northern anchor for the cultural corridor that begins at the southern end of Montrose with the Museum of Fine Arts, Houston.”

The design of the Ismaili Center in Houston is said to prize its landscape, but no images have been publicly shared. Other than regular mowing, no action is underway onsite.

Hester’s images also explore the nearby historic Magnolia Cemetery, a six-acre tract first used as a burial site by members of the First German Methodist Church of Houston in 1884. Usage of the cemetery by other churches began in 1892. In 1929, the cemetery ceded its land between Buffalo Drive (now Allen Parkway) and the bayou when the road was paved. Two tracts were sold to the nearby American General Corporation. As of 2014, the facility had more than 3,800 interments. —Jack Murphy