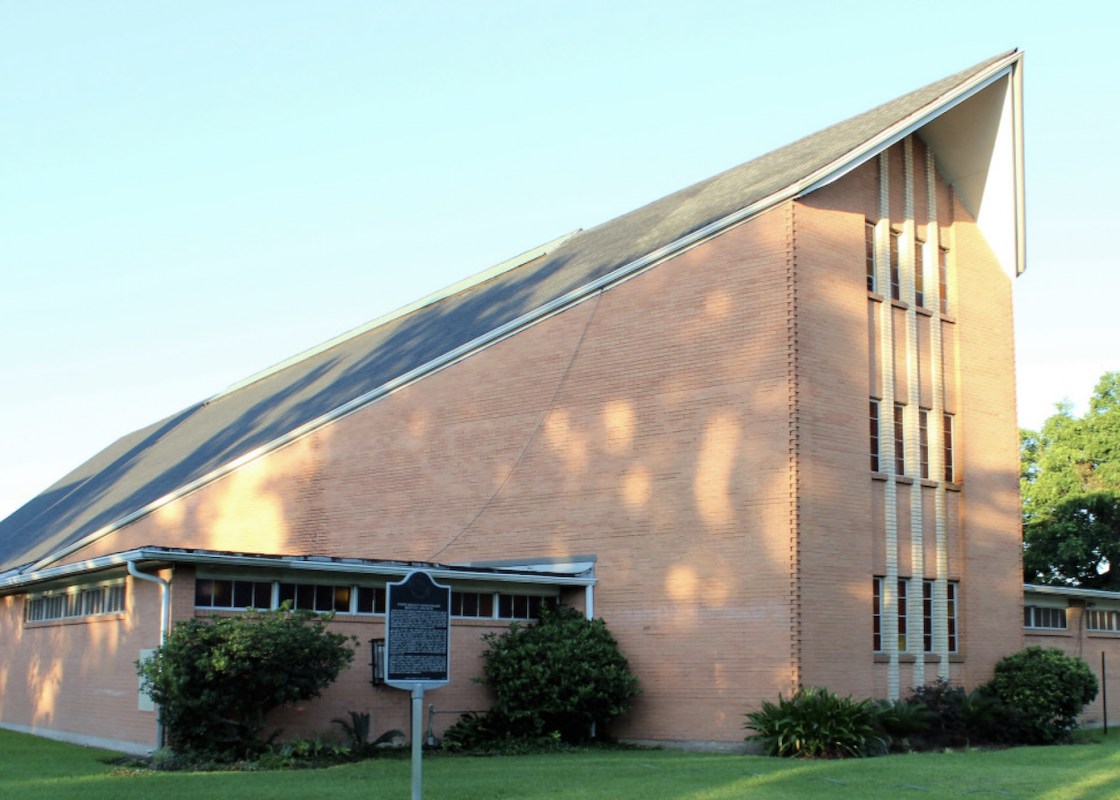 Waiting for the tax auction to begin, my father showed me the properties we were going to bid on. A print out from Linebarger (the attorneys that represent the City and County for delinquent tax sales) highlighted the properties in the Fifth Ward, in which we were interested. Next to the legal description, the document had a small photo of each property, and in one of the photos was a house that looked like it could have been designed by Frank Lloyd Wright. I looked at the small image again. 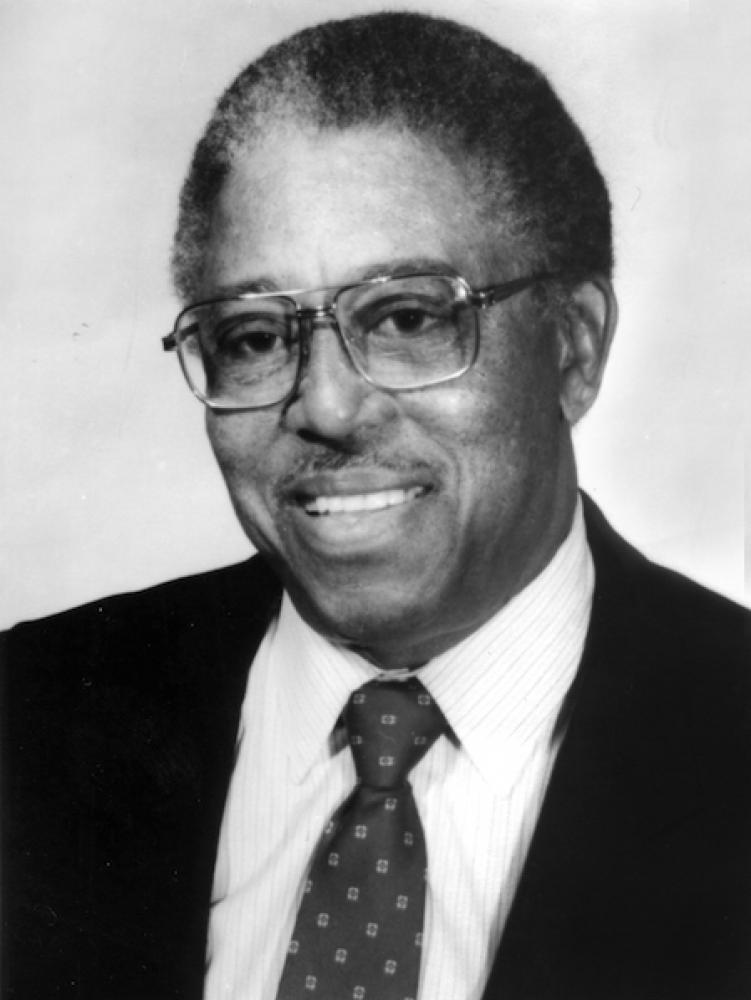 “The house is falling apart, and it’s abandoned,” my father replied.

But this house was unlike any other house in the neighborhood. A live oak reaches out and shades a long, transparent pavilion that is the living room. The entry is hidden-- the rest of the house is at an obtuse angle relative to the pavilion, and as it extends beyond the living room, this angle becomes acute and hides the entry. In front of the entry is the carport, almost invisible, with a flat roof and suspended in the air by thin columns.

We do not bid on houses, as a rule of thumb. One of the reasons we began developing in the Fifth Ward is because it is a strong community-- tearing down houses and displacing residents would destroy the community. We have acquired many properties in the neighborhood at the tax auction, the majority empty lots. While many had houses at one time, they became abandoned, dangerous buildings that the City demolished. After years of tax and demolition liens, the County auctions them off at a public bidding forum once a month.

“Never be the first one to bid. You wait until the auctioneer says going once, going twice, then you call out your bid.”

That was my father’s lesson on tax bidding. I expected a bidding war after I placed our bid on 2316 Harlem, but none came. We got the house. I knew we had to restore it. And there began my pursuit of John Chase.

John Saunders Chase (1925-2012) was the first African-American person licensed to practice architecture in the state of Texas- and the only black architect in the state, at that time (mid 1950’s), for about a decade. When he enrolled at the University of Texas, he was the first African-American to do so - in the entire South. When he graduated, no one would hire him, so he moved to Houston and started his own firm.

John Chase’s first commission was in the Fifth Ward, First Shiloh Baptist Church, and it was built around the same time as 2316 Harlem. The main sanctuary has a roof that angles out and cantilevers-- just like our house. Before entering the sanctuary, the congregant passes through a one story, flat roof vestibule. In Wright’s Unity Temple, the congregant enters a lower volume before entering into the larger sanctuary. Having made these connections, between the house and the church, namely that they are in the same neighborhood, built at the same time, and with similar influences, I felt the house could be a Chase design. 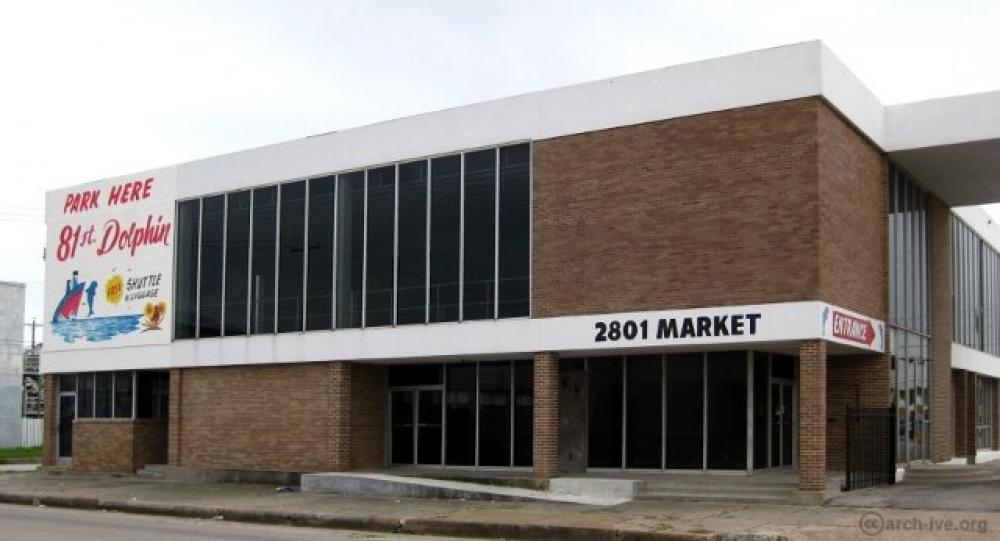 As anyone does when faced with an architectural history quandary, I emailed Stephen Fox. Stephen said he was not familiar with the house, but suggested I research the original homeowners and that I contact John Chase’s wife.

Even as a UT graduate, getting in touch with Mrs. Drucie Chase is not an easy task. After a couple of phone messages and a letter, she finally answered the phone. She asked me when it was built and responded that at that time, 1953, they had recently moved to Houston. She did not remember the house nor the owners, and said the person who worked with John at the time is also deceased.

Many people in the neighborhood recall the house, and visiting it. It sits on two lots (which is unusual) and also a characteristic of Wright’s Usonian homes, of which two were built, one in Madison, Wisconsin. Wright famously said a house should be of the hill and not on the hill. It is easier to be of the hill with two lots, and the house in Madison hides among the others as it spreads out on the hill amongst the trees. The house at 2316 Harlem also spreads out, its Prairie style design camouflages in the meadows of the Fifth Ward. Shortly after starting the remodel of the house, a relative of the original owners called. He was concerned with what we were doing to the house, he said it was an important house. He was relieved to know we were restoring it, but he did not recall the architect. 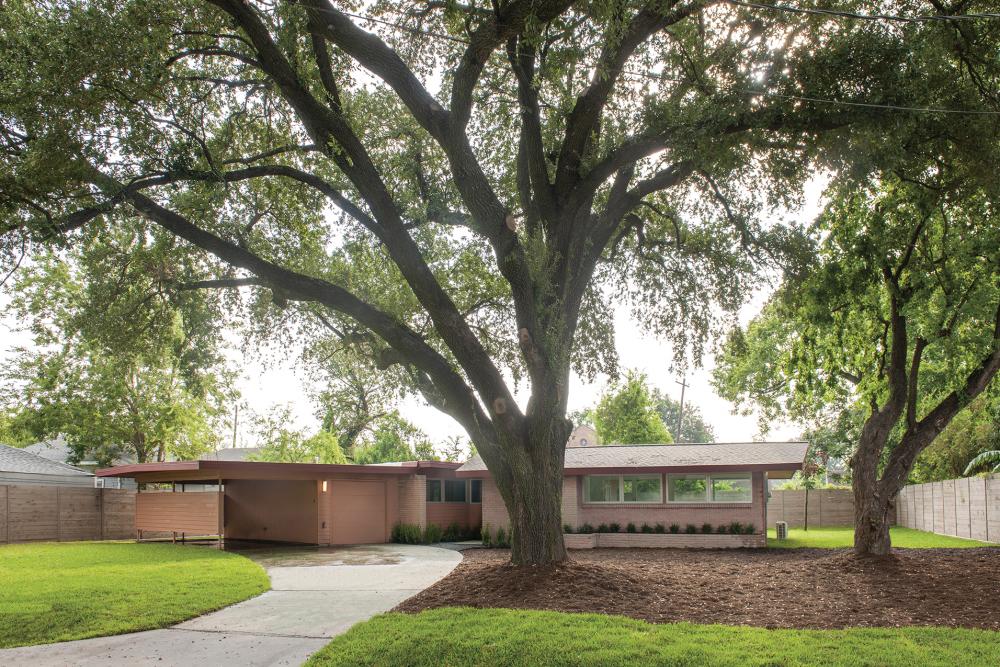 Once restored, the house would need to compete with current architectural trends to be salable. We added a master bathroom and closet. It happened to fit into an empty nook at the eastern end of the house next to the largest room. Filling in the empty corner then highlighted the rear courtyard. We also decided to open the kitchen to the dining room, which had been originally enclosed. This opening allows views across the two axis that create the angles of the house. Perhaps this is what Mr. Chase had originally intended-- as architects know, the client has the last say.

I took a circuitous route to arrive at Marty Merritt, a musician who has a passion for architectural history and knows a considerable amount  about John Chase. From a conversation with David Bucek to a meeting with Anna Mod, and emails between David Heymann and Ben Koush, Marty emerged with several emails of research that connects John Chase to the original owner of the house: Milton L. Curtis.  The garage door of the house had large “MLC” letters painted on it.

David Heymann, the noted architect and academic, recently measured and drew Chase’s own house. “I don’t honestly know if that is a Chase house or not,” he had said, “though I am inclined to think it may not be. You’re right about a couple of Usonian details that Chase favored, including the planters, and particularly, the vertical brick piers with glass in between that you frequently find in Chase projects. But when I was researching, I ran across a fair number of houses like that in Houston. Also, 1953 is an early date – Chase started practice officially in 1952 – so it is the kind of thing Drucie would more likely remember, because Chase was doing so much more of the drafting then, and early commissions are always memorable. The biggest frustration is the office did not keep a clear set of records, or drawings.” David suggested that we contact Ben Koush, who then forwarded the email to Marty. 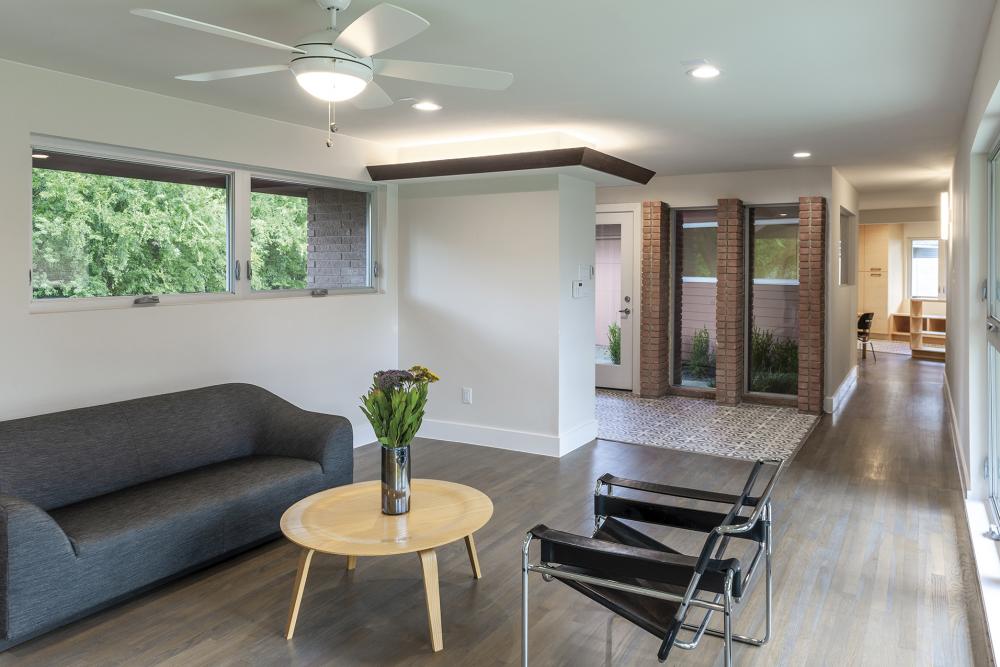 “Milton Curtis seems to have been a member of the Negro Chamber of Commerce, and, in later years, a real estate investor,” replied Marty. “I can’t find anything about the house, but in general, I rarely do about African Americans during the heyday of segregation. The overhanging gable tends to flare out slightly in plan.  I’ve seen that on every other early Chase house I know of. I also don’t see any similar developer houses nearby - even with similar proportions or materials let alone modern detailing. I think it’s more likely than not, [a] Chase [house].  If not him, possibly an African American with some technical training. We had a Mod of the Month in the Third Ward last year that was designed by a shop teacher who was a trained mechanical draftsman.”

A day later Marty wrote, “Milton Curtis died in May, 1981, and the house passed to his daughter Hortense Davis.  His Houston Post obituary lists him as a retired official of the International Longshoremen’s Association.  We know that Chase designed an ILA hall in Galveston in 1959, so there may be some connection there.” 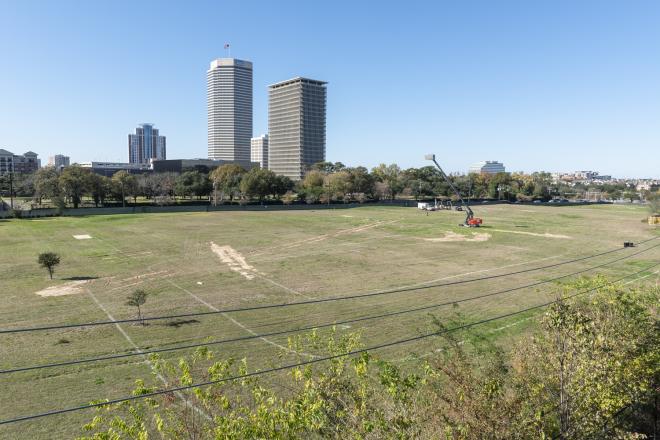 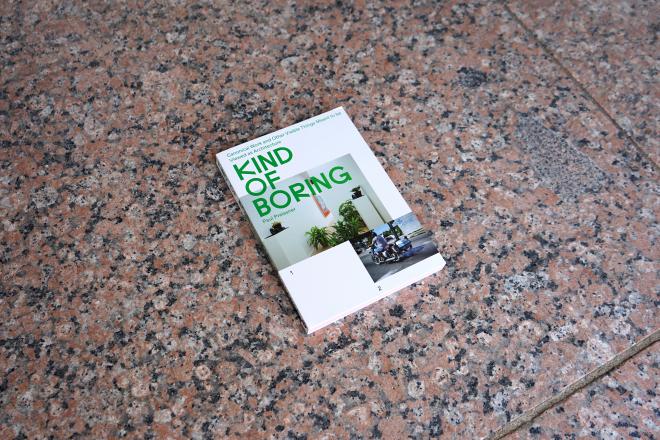 Kind of Boring is Just Fine 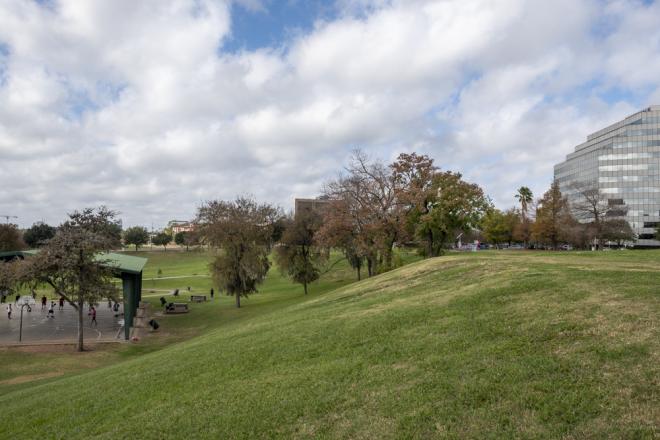 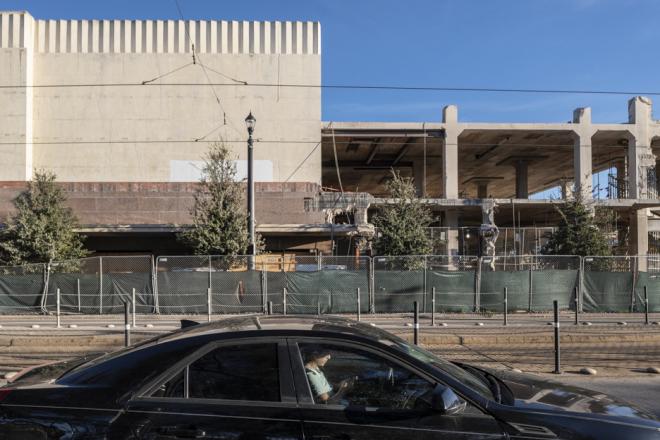 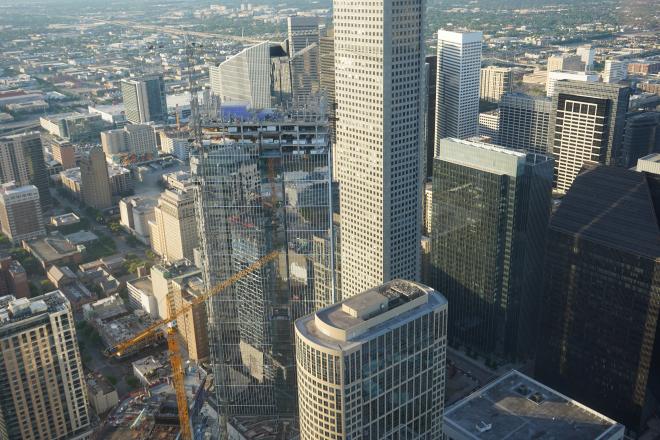 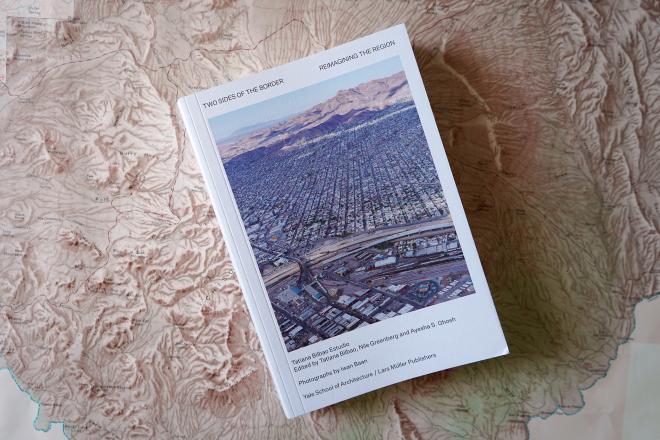 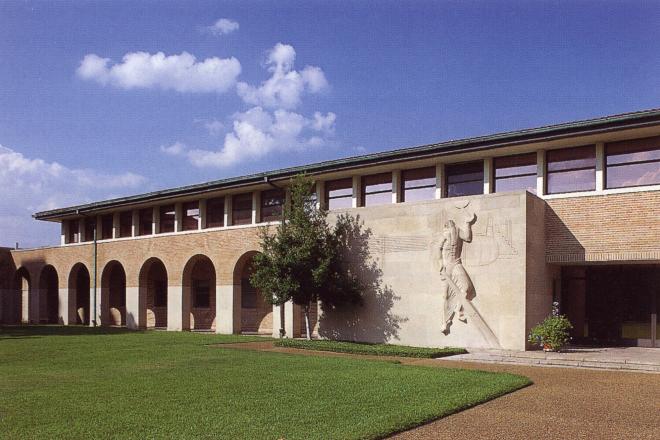 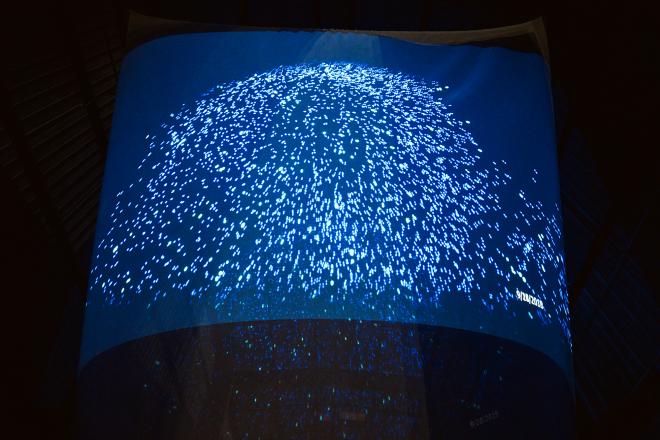