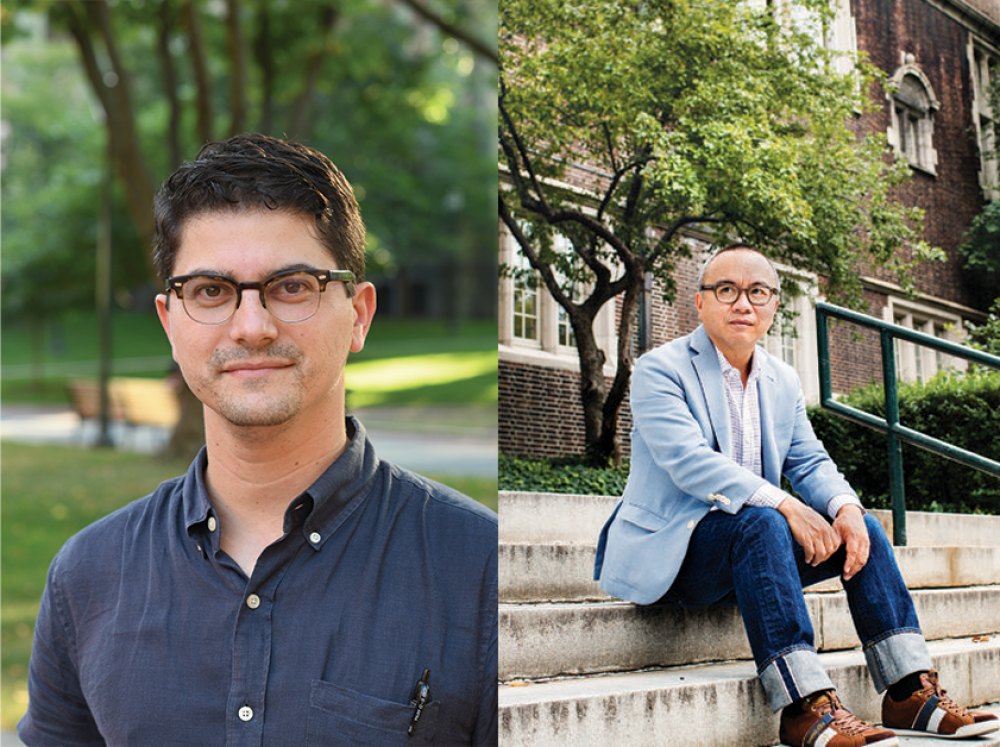 Register here to receive a link to join.

Paul Farber, Director, and Ken Lum, Chief Curatorial Advisor, Monument Lab, present the lecture "Monument Lab: Power and Participation in Public Art" at 12:00 p.m. cst via Zoom as part of the 2021-2022 Rice Architecture Lecture Series, Building Identities, Fall Edition. This lecture is presented by Rice Design Alliance.
Monument Lab is a public art and history studio based in Philadelphia. Monument Lab works with artists, students, educators, activists, municipal agencies, and cultural institutions on participatory approaches to public engagement and collective memory. Founded by Paul Farber and Ken Lum in 2012, Monument Lab cultivates and facilitates critical conversations around the past, present, and future of monuments.
Paul M. Farber is Director of Monument Lab. He also serves as Senior Research Scholar at the Center for Public Art & Space at the University of Pennsylvania.
Farber's research and curatorial projects explore transnational urban history, cultural memory, and creative approaches to civic engagement. He is author of A Wall of Our Own: An American History of the Berlin Wall (University of North Carolina Press, 2020) which tells the untold story of a group of American artists and writers (Leonard Freed, Angela Davis, Shinkichi Tajiri, and Audre Lorde) who found refuge along the Berlin Wall and in Cold War Germany in order to confront political divisions back home in the United States. He is also co-editor with Ken Lum of Monument Lab: Creative Speculations for Philadelphia (Temple University Press, 2019), a public art and history handbook designed to generate new critical ways of thinking about and building monuments.
Farber’s Monument Lab is the inaugural grantee of the Andrew W. Mellon Foundation’s “Monuments Project,” a $250 Million initiative aims to “transform the way our country’s histories are told in public spaces, including Monument Lab’s National Monument Audit and the opening of research field offices throughout the country.
In addition to his work with Monument Lab, Farber served as curator for the inaugural Artist-in-Residence Program at the Office of the District Attorney of Philadelphia with Mural Arts (2020), the traveling exhibition The Wall in Our Heads: American Artists and the Berlin Wall (2014–2016), and Stephanie Syjuco: American Rubble (2014). Farber has contributed to numerous art and history publications. He edited a new critical edition of photographer Leonard Freed’s Made in Germany (Steidl Verlag, 2013), co-edited a special issue of the journal Criticism on HBO's series, The Wire (Wayne State University Press, 2011), and contributed essays and advised the production of numerous visual culture books including Leonard Freed's This Is the Day: The March on Washington (Getty Publications, 2013), Nathan Benn's Kodachrome Memory: American Pictures 1972-1990 (powerHouse, 2013), and Jamel Shabazz's Pieces of a Man (ArtVoices, 2016). He has been invited to lecture and lead workshops for Americans for the Arts, the Library of Congress, New York Public Library, and the Philadelphia Museum of Art. His work on culture has also previously appeared in The Guardian, Brooklyn Rail, Al Jazeera, Museums & Social Issues, Diplomatic History, Art & the Public Sphere, Vibe, and on NPR.
Farber earned a Ph.D. and M.A. in American Culture from the University of Michigan and a BA in Urban Studies from the University of Pennsylvania.
Ken Lum was born in Vancouver, Canada but presently resides in Philadelphia, Pennsylvania where he is the Marilyn Jordan Taylor Presidential Professor and chair of the Department of Fine Arts at the University of Pennsylvania Stuart Weitzman School of Design.
From 2000 to 2006 Ken Lum was head of the graduate program in studio art at the University of British Columbia, Vancouver, where he taught from 1990 until 2006. Lum joined the faculty of Bard College, Annandale-on-Hudson, in 2005 and worked there until 2007. He has been an invited professor at the École Nationale Supérieure des Beaux-Arts, Paris, the Akademie der Bildenden Kunst, Munich, California College of the Arts, San Francisco, and the China Art Academy, Hangzhou. Lum is co-founder
and founding editor of Yishu Journal of Contemporary Chinese Art. He has published extensively; and recently completed an artists’ book project with philosopher Hubert Damisch that was launched with Three Star Press, Paris.
Lum was Project Manager for Okwui Enwezor’s The Short Century: Independence and Liberation Movements in Africa 1945 – 1994 (2001). He was also co-curator of the 7th Sharjah Biennial (2005), and Shanghai Modern: 1919 – 1945 (2005). Lum has exhibited widely, including São Paulo Biennial (1998), Shanghai Biennale (2000), Documenta 11 (2002), the Istanbul Biennial (2007), and the Gwangju Biennale (2008), Moscow Biennial 2011, and the Whitney Biennial 2014. He has published many essays on art. He has also realized permanent public art commissions for the cities of Vienna, Vancouver, Utrecht, Leiden, St. Moritz, Toronto, and St Louis.
Building Identities
Construction of physical structures is inseparable from the construction of human identities. Rice Architecture aims to broaden our understanding of building construction and identity formation as two interrelated processes, seeking to close the gap between the social and the formal in the field of architecture and our world more broadly. Reflecting the pluralism of Houston as the most diverse city in the United States, Building Identities advances the agency of architecture in a new multicultural world. We believe this is an urgent theme for our school, our community, and our field at large.
All lectures are free and open to the public. Please be sure to register online for each lecture to receive the link to join.
All fall 2021 lectures are eligible for one AIA/CES Learning Unit.
This lecture series is made possible through the generous support of the Betty R. and the George F. Pierce Jr., FAIA, Fund, the William B. Coleman Jr. Colloquium Fund for Architecture, the Wm. W. Caudill Lecture Series Fund, and Rice Design Alliance (RDA), the public programs and outreach arm of Rice Architecture. Additional programming support for this lecture is provided by RDA members and the Texas Commission on the Arts.