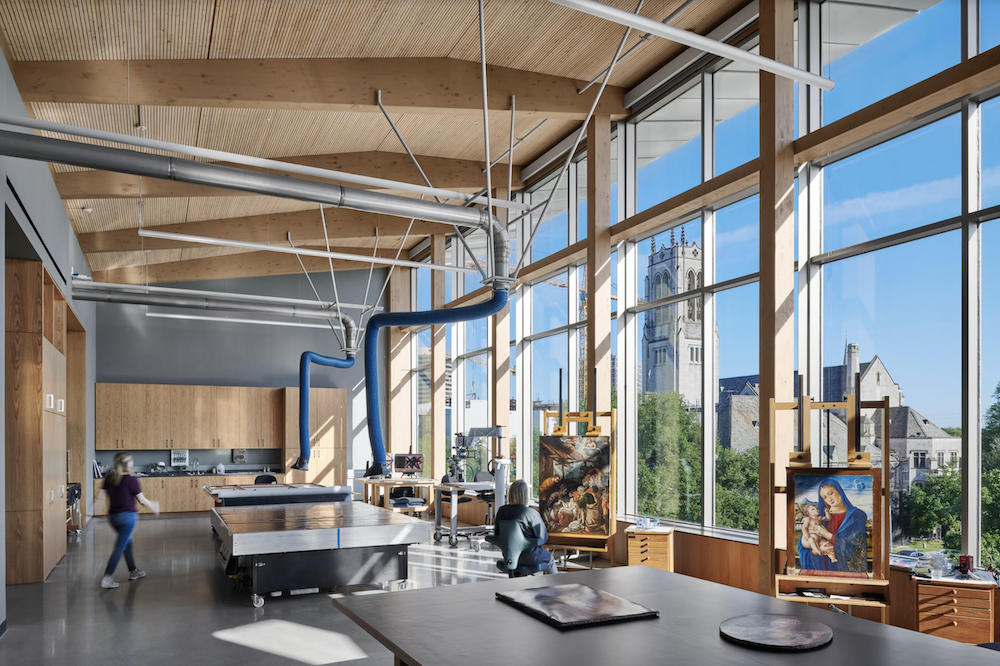 Space is limited and RSVP is required.

RDA concludes its Spring 2022 Mass Timber Tour series with a visit to the Sarah Campbell Blaffer Foundation Center for Conservation at the Museum of Fine Arts, Houston on Thursday, March 24, 2022, at 5:00 p.m.

The facility was designed by Lake|Flato Architects with Kendall/Heaton Associates and built by Bellows Construction. Its mass timber material was sourced from StructureCraft in Vancouver, Canada. While prior buildings in Houston utilized large wood elements such as glulam beams (notably in the Montrose Market H-E-B, also designed by Lake|Flato Architects), this facility, opened in 2018, was the first contemporary mass timber building in the region.

The Sarah Campbell Blaffer Foundation Center for Conservation houses state-of-the art conservation labs and studios. The center brings the MFAH conservation team together under one roof and in close proximity to the museum. It provides facilities not only for MFAH research and conservation projects, but also for national and international collaborations.

The center is composed of a series of light-filled studios, sat atop an existing museum building, that redefines the campus's eastern edge to create a pivotal portal into the campus and complement the museum's evolving architectural lineage. Four studio bays are cantilevered from the building’s north and west façades to celebrate the building’s function and allow a glimpse of the work going on inside. Designed to optimize daylight while protecting the artwork inside, the studio bays are oriented East-West and topped with shaped roofs and clerestory windows to flood the studios with indirect natural light.

The building leverages an innovative structural strategy utilizing both mass timber and steel structure. It is the first installation of dowel laminated timber (DLT) panels in North America, and was prefabricated, panelized, and lifted into place, resulting in quicker onsite construction. The structure is left exposed as a finish material to lend the warmth and texture of wood and is whitewashed to reflect daylight into the building. Lake|Flato Architects also utilized this DLT system at its Hotel Magdalena in Austin, completed in 2021.

RDA’s tour will be led by Per Knutås, Head of Conservation for the Museum of Fine Arts, Houston. Join us to learn more about mass timber and the operations of the conservation center.

You must be a current RDA member 18 years or older to attend.