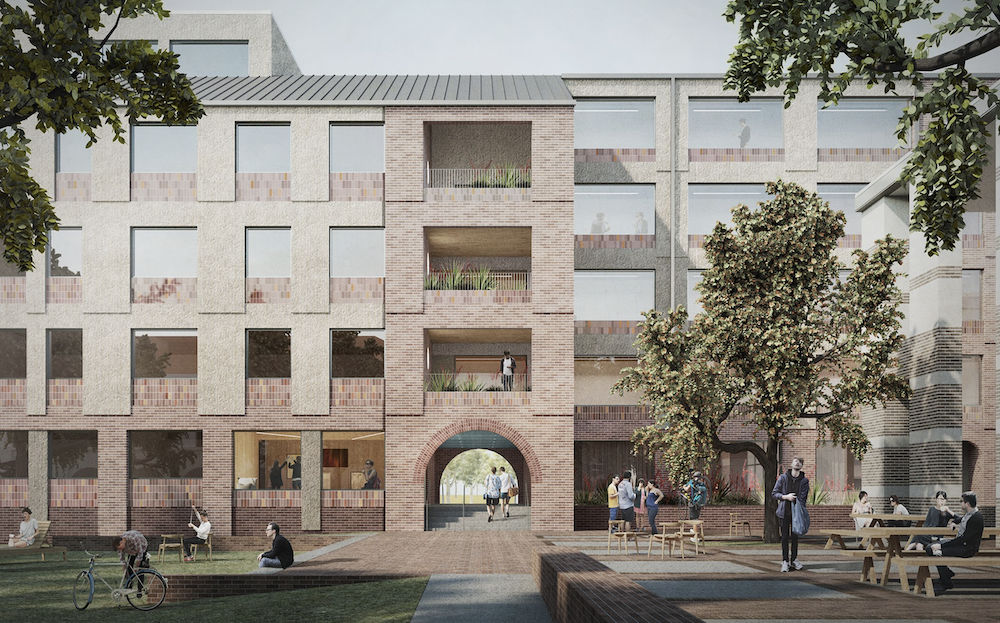 Space is limited and RSVP is required.

RDA continues its Spring 2022 Mass Timber Tour series with an exclusive visit to the construction site of the new wing of Hanszen College at Rice University on Thursday, March 10, 2022, at 5 p.m.

The project is designed by Berlin- and New York-based architects Barkow Leibinger with Kirksey Architecture. Forney Construction is the project’s general contractor. The mass timber components are sourced from Structurlam, a Canadian company which has recently opened a new facility in Arkansas. The effort is the second campus building designed by Barkow Leibinger; the first was a replacement tower for Sid Richardson Residential Tower, completed in 2020.

This project is the first mass timber building to be built on campus at Rice and benefits from a $100,000 grant from the Department of Agriculture’s U.S. Forest Service to support the construction of mass timber buildings on college campuses. The building utilizes cross-laminated timber (CLT) made from southern yellow pine, making it the first use of this construction material for a residential college on a university campus in Texas.

Hanszen College was established in 1957. Its 244 beds are distributed in two college wings. The “old dorm” wing, which was built in the 1920s, accommodates 124 beds. The “new wing” was built in 1957 and accommodates 120 beds. This current project replaces the wing dating from 1957.

The institutional goals for the Hanszen College Replacement Wing Project include: a contemporary, accessible residential facility resulting in a total bed-count increase for Hanszen Colleg; a greater concentration of Hanszen residential units near the Hanszen Quadrangle and Common; a residential facility that utilizes campus land more efficiently than Hanszen’s 1957 wing; the liberation of campus land, possibly for a new residential college in the future; and a project achieving LEED Silver status and other energy efficiency objectives.

The new Hanszen College replacement wing will be approximately 50,000 gross square feet over 4.5 stories. It supports 166 beds in room configurations of singles and doubles and two Residential Advisors Suites, each composed of living space, kitchen, two-bedrooms, and two bathrooms. Demolition of the existing 1957 wing took place in late May 2021. Construction continues through 2022.

RDA’s tour will be led by Darrell Whatley and Sandra Bauder from Kirksey Architecture with Arthur Miller from Forney Construction. Join us to learn more about mass timber and its usage in the design of this exciting project.

You must be a current RDA member 18 years or older to attend.