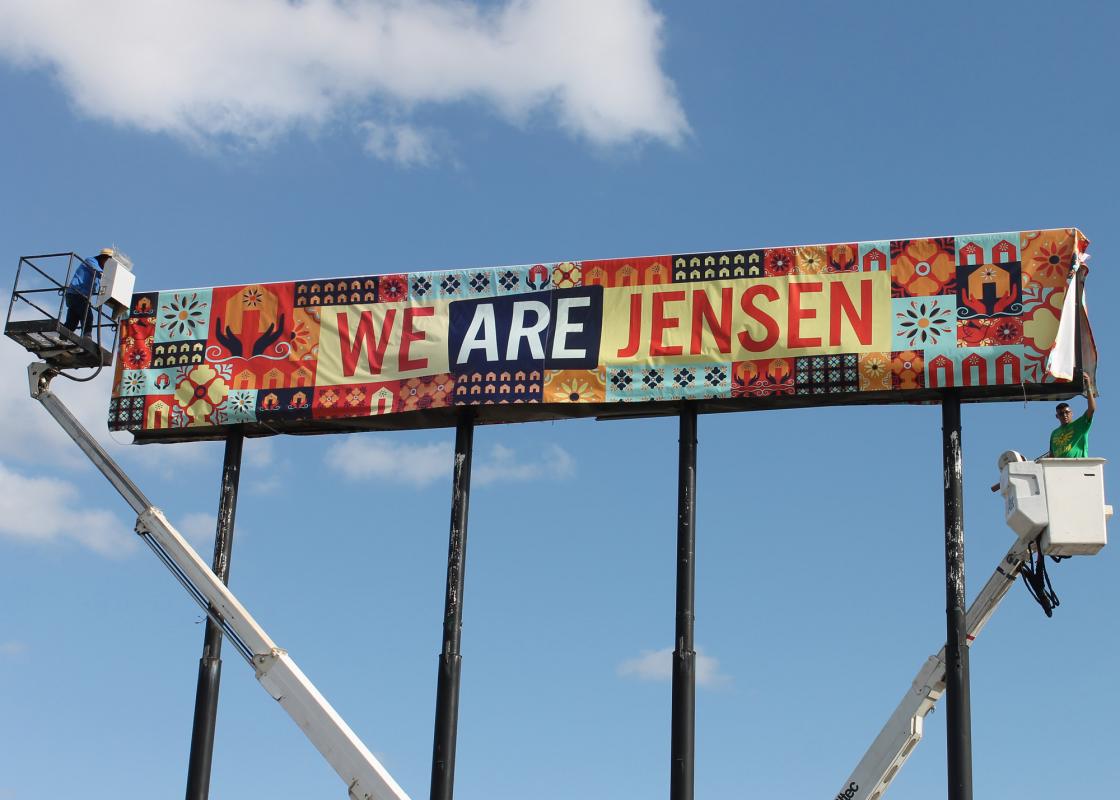 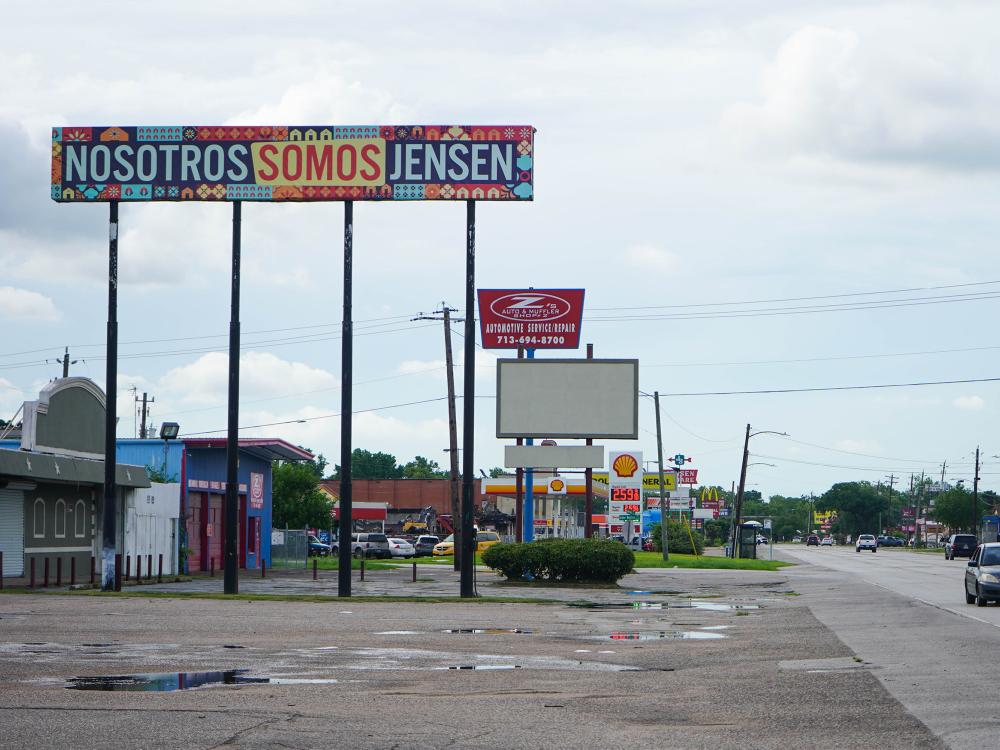 Architects and designers have always held a responsibility to the communities that they serve. In the past year especially, evaluating and fulfilling this responsibility has become an imperative for many students and teachers of the design disciplines. At the University of Houston, the July 2020 student-written open letter in support of Black lives demanded an increased emphasis on collaborative community design and grounded program briefs. Still, teaching sensitive and responsible community design practices is by no means easy. Without the proper care and partnerships—and a commitment to real and systemic change—studio projects located in communities that architecture and design historically neglect can become exploitative and sensationalized, running the risk of doing more harm than good.

Going beyond the surface, the ongoing Driving Jensen project, which adds student-designed elements to Jensen Drive in northeast Houston, is an example of what it means to teach relationship building and collaboration, in addition to the importance of co-creating projects with and not for communities.

Driving Jensen’s various components are in progress. In late June 2021, the sun was sweltering overhead as of community leaders, partners, designers, residents, and interested onlookers collected at the former Foodland on Jensen Drive to watch a bright public art piece take the place of an empty sign. The expansive billboard, measuring over six feet high by forty feet wide and designed by University of Houston graphic design and architecture students, proudly declares “WE ARE JENSEN/NOSOTROS SOMOS JENSEN.” Despite the heat, the atmosphere was triumphant and the event a celebration of collaboration, design, and community power. Driving Jensen, a project that began in early 2020—before the global pandemic and murder of George Floyd changed our world—is finally coming to life. 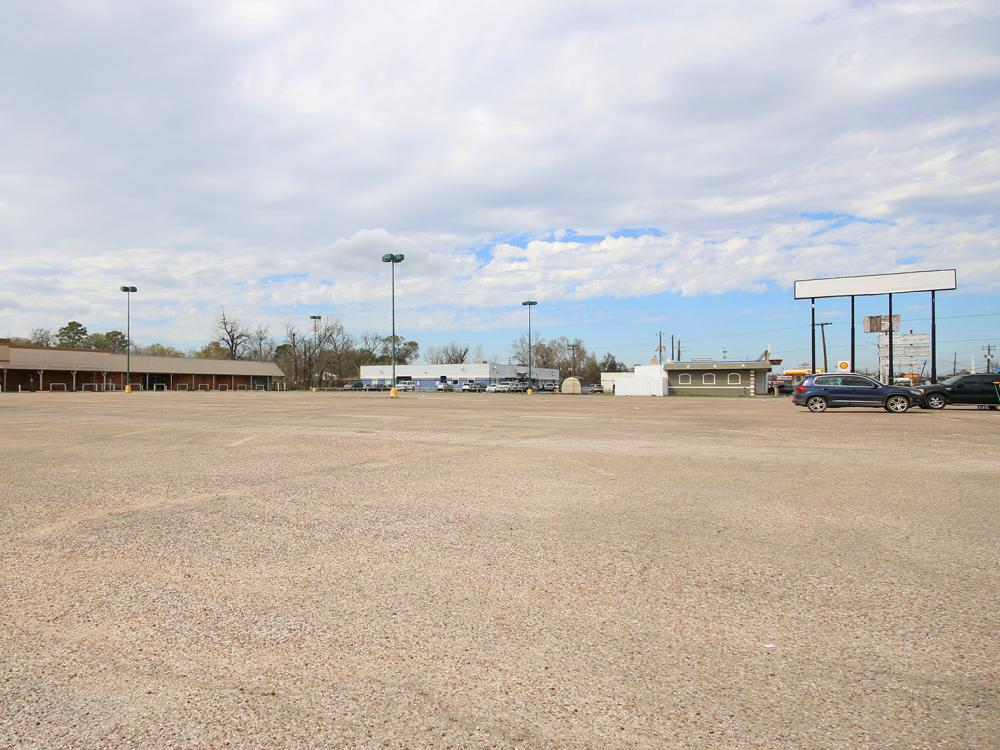 The story of Jensen Drive mirrors that of many other commercial corridors across Houston. In the mid-twentieth century, Jensen Drive, as the center of economic and social life for its surrounding community, was bustling with shopping and entertainment. The corridor was home to two theaters, two grocery stores, and dozens of shops and restaurants, many at Jensen Square. The Eastex Freeway’s completion in the 1950s drew traffic away from the street and set in motion a period of disinvestment that was accelerated by the flight of middle-class families to more distant suburbs.

Today, the theaters are closed, the Foodland store sits empty, the former Weingarten’s is a Family Dollar, and Jensen Square is being slowly demolished as the result of a recent fire. Yet, Jensen Drive’s rich past is visible in the historic signage and architecture that lines the street, with the most prominent anchor being the Granada Theater, which opened in 1949. The constant stream of cars, pedestrians, and cyclists along the street is testament to the fact that the corridor remains relevant. The street is also home to new businesses, mostly local and small, whose owners are re-purposing the old buildings and re-centering economic opportunity. 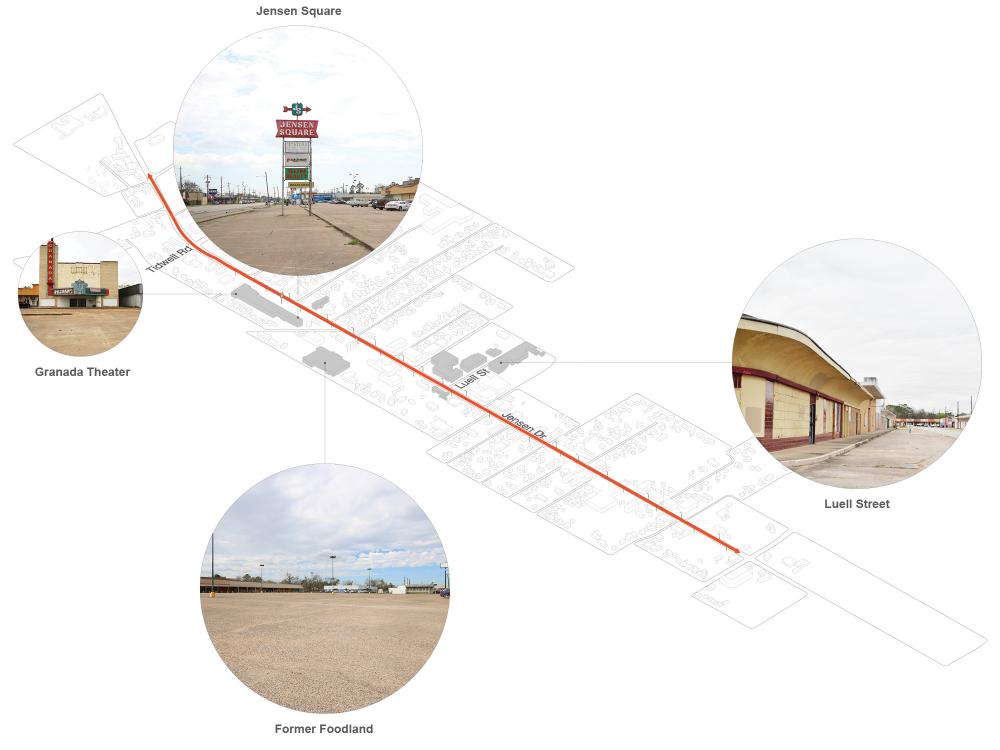 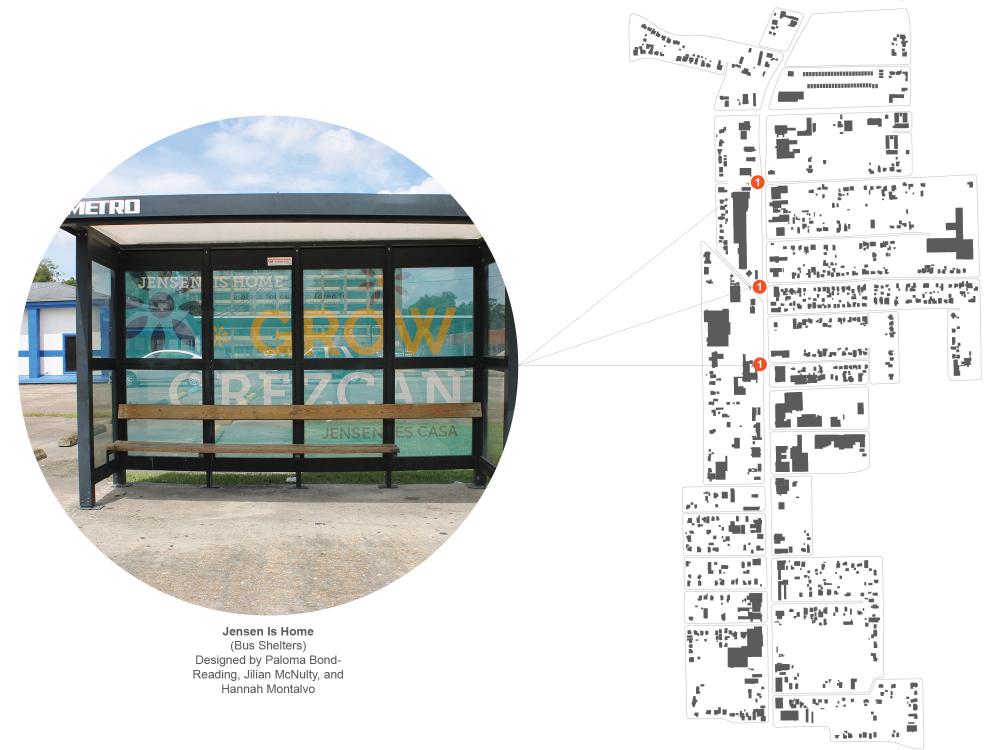 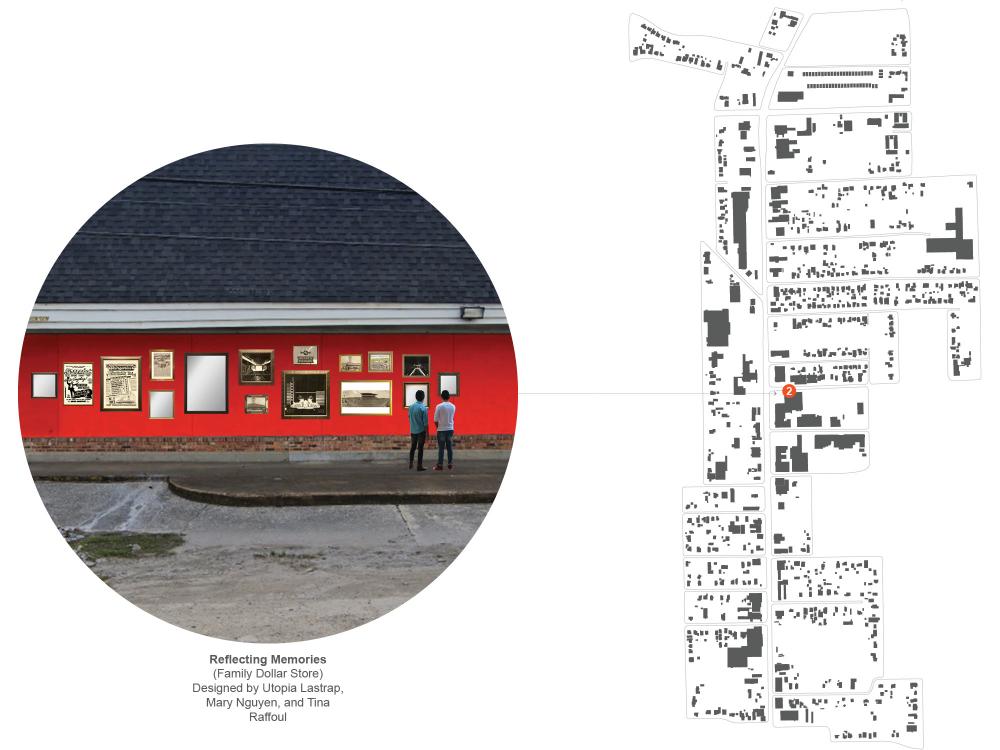 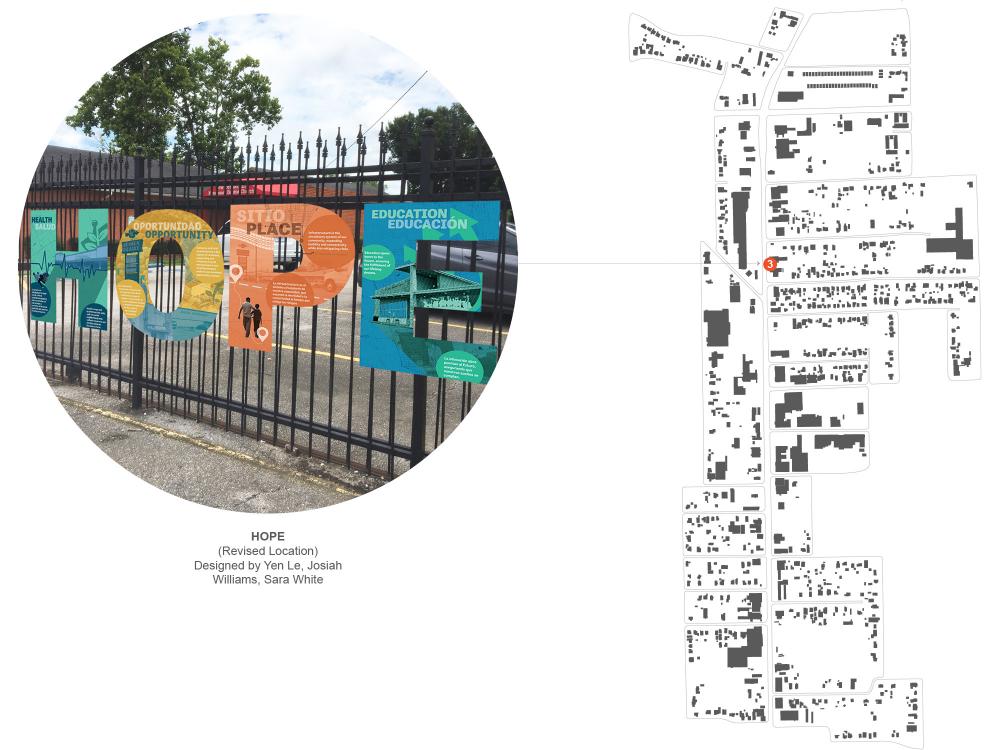 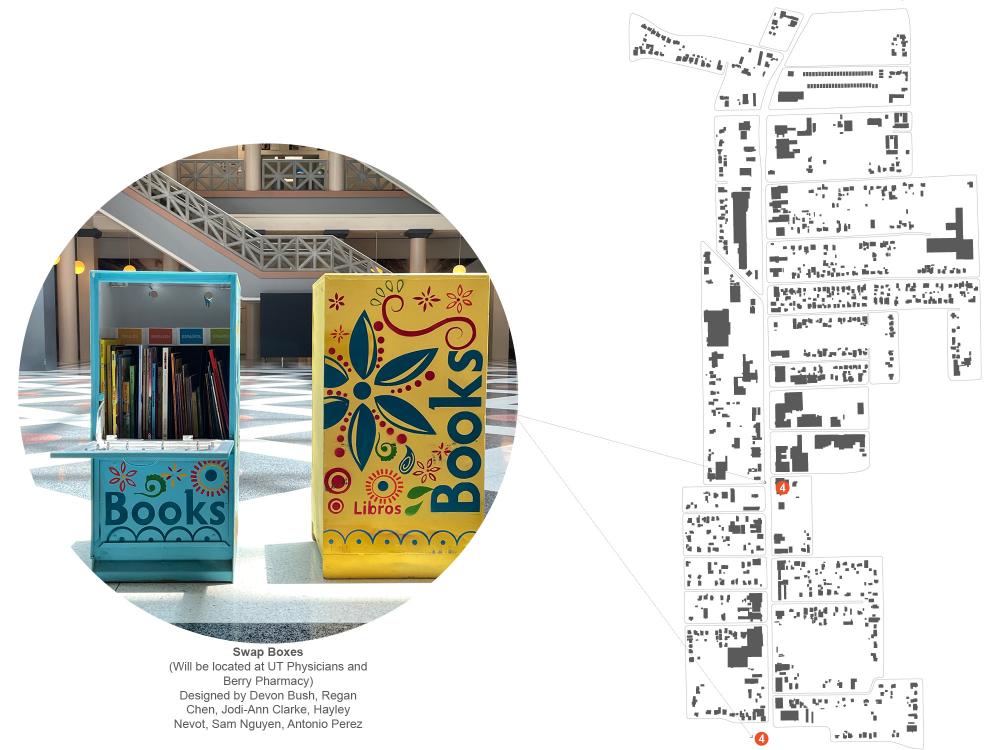 It’s within this context that the Driving Jensen project asked design students at the University of Houston to collectively explore what it means to see new opportunities where only challenges have been identified. The goal was to uncover ways to activate vacant spaces and transform underutilized infrastructures, walls, and signs as a means of telling stories about this place and reflecting the visions of those who today call the neighborhood home. Architecture Professor Susan Rogers and Graphic Design Professor Fiona McGettigan co-taught the studio. The pair previously worked together on the Animating History project in Houston’s Third Ward and share a commitment to creating spaces for students to work side by side with community leaders in realizing change. Driving Jensen was another opportunity to renew this commitment. The project built on the Community Design Resource Center’s 2018 Urban Design Toolkit, which was also developed collaboratively with community leaders.

“WE ARE JENSEN/NOSOTROS SOMOS JENSEN” is the first in a series of student designed projects for Jensen Drive that will be installed in the coming months. The sign, designed by now-graduates Tess Wright, Nicole Dinh, and Santiago Cubillos, is a declaration of pride in place. In Dinh’s words, the intention of the work is to “highlight the pride and culture that Jensen holds.” Roni Cabrera-Moreno, an Eastex Jensen resident and founder of HTX Art, agrees; she said that “it’s so crazy awesome to see all this color coming up to break up the concrete and bring life to the neighborhood.” Additional projects include art at METRO bus shelters, a wall for reflection and memories, a forest of whirling windmills, swap boxes for books, and a message of “HOPE” at New Bethlehem Missionary Baptist Church. 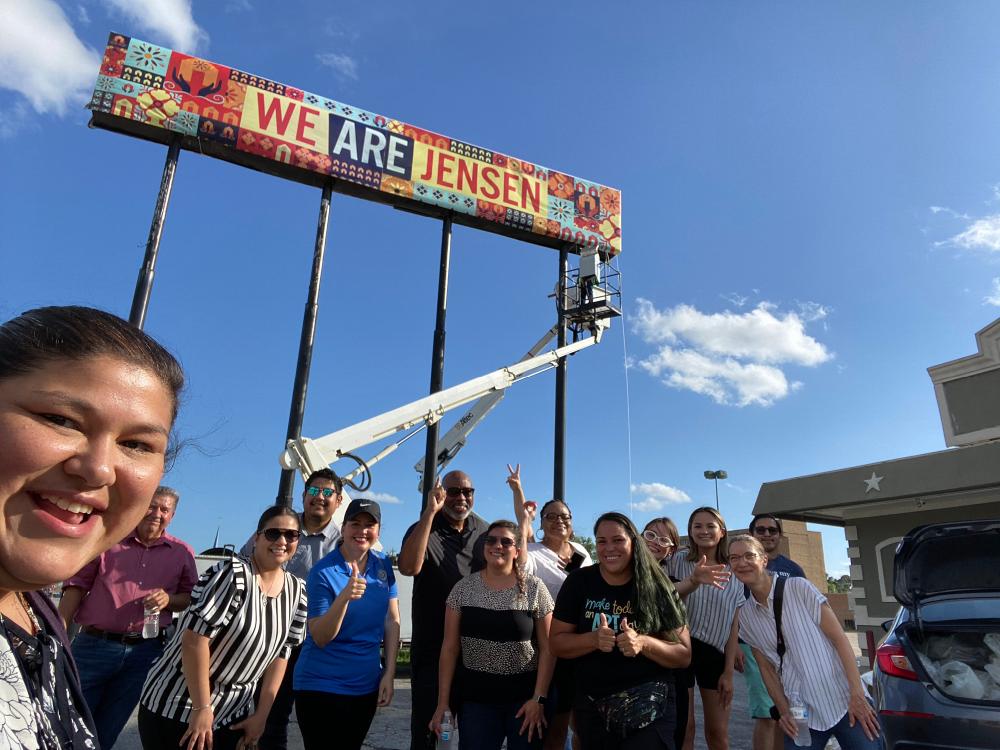 With community at its center, each project designed by the student teams depart from a point of optimism. The projects bring people together, build on assets, and elevate opportunities to amplify the history and meaning of public spaces throughout the corridor. Next time you are Driving Jensen, look around.

The Driving Jensen project is part of a larger effort led by Houston Northeast CDC in collaboration with the University of Houston’s Community Design Resource Center and the Greater Northside Management District. The project is funded by Houston LISC.