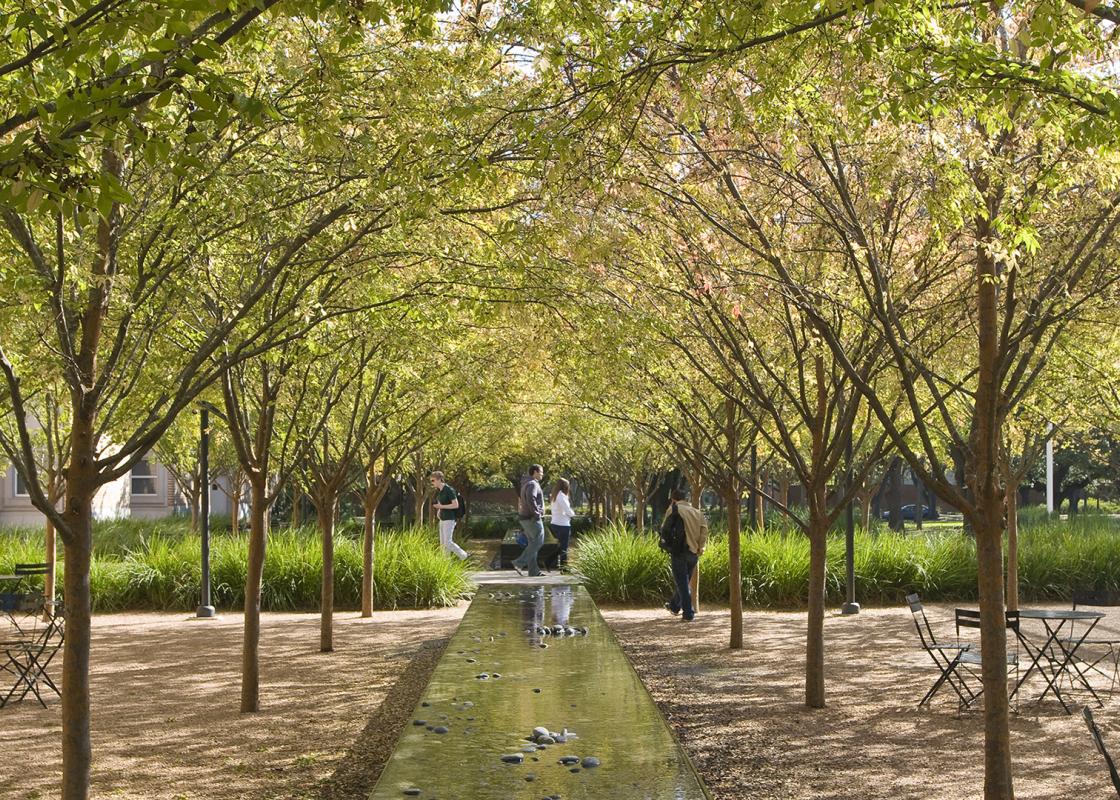 This article originally appeared in Cite 101: Be Here, in which the editors explored the idea of creative placemaking as it applies to the context of Houston. In thinking about the places that are special for Houstonians, the perspective of the historian and educator Stephen Fox is unique and unparalleled. His idiosyncratic interpretation brings us places that might seem obvious (i.e. the Astrodome), but for reasons that are unexpected: based on experience, form, and materials --- a kind of critical material understanding of place.

When Ernesto Alfaro asked me to write about my five favorite places in Houston, I made a list and came up with an absolute minimum of fourteen. In subsequent conversation with Ernesto and Raj Mankad, the focus of the assignment shifted as the concept of place, the theme of this issue, was emphasized. As common a word as “place” is, defining it is tricky, especially without resorting to tautology (a “place” is a “place” is a “place”). Ernesto proposed the concept “creative placemaking,” one that he pursues in the practice of landscape architecture. He noted, however, that this phrase has generated resistance, which led the three of us to debate the conceptual place of phenomenal place in the construction of place (back to tautology again). Therefore I feel compelled to precede enumerating my list of favorite Houston places with an attempt to explain what makes them “places,” as opposed to mere spaces, terrain, landscapes, or buildings. Online definitions of “place” agree that it is a specific, defined, and bounded entity. The American Heritage Dictionary of the English Language offers thirteen definitions of “place” as a noun, another twelve of the verb “to place,” and two more as a term of sports. In confronting the question of what makes a space a place once before, I had defined place as a distinct ideological space. Hanging something as awkward as “ideological” on space (sorry: in skirting tautology, I seem to be going overboard on quotation marks) derives from my intuition that space becomes a place when we (or they) agree that said space possesses special, distinctive, and defining qualities. These qualities can be bad or good, but they differentiate that space from what adjoins and surrounds it. It is this implicit agreement — this social consensus — on the existence of defining qualities that guarantees that a space comes to be accepted as a place, and it is because of this consensual operation that I use the term “ideological” to describe the social process by which space gets promoted to the status of place. Adding “critical” to “place” emphasizes the roles played by choice, intention, and design in the formation of places. To criticize is to make reasoned judgments about the truth, beauty, virtue, and goodness claims of what is being evaluated. Linking “critical” and “place” acknowledges that the aura of specialness setting a place apart grows out of how and why personal and collective sensations of elation, amazement, awe, and reverence (or fear, disgust, revulsion, and outrage) get emotionally connected to a place. The proposition “critical place” encourages questioning of why we respond subjectively to places the way we do. It also implies that prettiness, happiness, and personal satisfaction are not the exclusive criteria for judging the coherence of a place. Enjoyment, while emotionally gratifying, can inhibit apprehension of the phenomenal dimensions of a place if enjoyment is the sole sensation by which the efficacy of a place is measured. Having, I hope, made the case for critical placemaking, here are my choices.

1. Banks of Buffalo Bayou in Memorial Park. In August 2014 I had the opportunity to kayak on Buffalo Bayou from Briarbend Park downstream to Sabine Street. I was mesmerized by the bayou’s frontage in Memorial Park. There one sees banks that take the form of high clay bluffs tightly framing the bayou’s meanders. At irregular intervals the banks are cut through with ravines. These carry off storm water when it rains and are also conduits for natural springs. Vegetation is dense in the riparian forest buffer lining the bayou banks. The root systems of trees and shrubs anchor the banks, and the canopies of tall trees shade the streambed, creating a serene microclimate even in the middle of summer. When the water level is low, you can see outcroppings of chimney rock protruding from the sandy beaches at the base of the banks, sometimes extending into the channel. There are even little rapids near Memorial Park’s west edge. The bayou’s park frontage has experienced the least engineering intervention along the entire course of Buffalo Bayou. It is where you can still experience Houston as a pre-urban landscape in which the forces of animal life, plant life, and climate have not been subordinated by engineering. Sadly, a portion of this landscape has been targeted by the Harris County Flood Control District for “natural restoration” with bulldozing, clear-cutting of vegetation, and destruction of the historic high bluffs in order to reshape the banks and dredge a new channel. The non-profit Save Buffalo Bayou has marshaled public awareness of the threat to this essential Houston place, where it remains possible to discern the spiritual profundity of Houston.

2. Main concourse of the Houston Zoo. The main concourse of the Houston Zoo shows how beautiful, sophisticated, and subtle public outdoor space in Houston can be. Designed by the Kansas City landscape architects Hare & Hare as part of their comprehensive reconstruction of the zoo in 1949-50, the concourse demonstrates the effectiveness of symmetrical spatial organization as a method to compensate for Houston’s flatness. Hare & Hare combined a central, rectangular reflection basin with architecturally integrated rows of benches, upper and lower terraces that “spatialize” the experience of flatness, and an enclosing avenue of majestic live oak trees. These elements construct a powerful sense of tranquility and well-being that cleverly condenses the larger spatial diagram structuring the plan of Hermann Park. Acknowledging the unpredictability of Houston’s weather, Hare & Hare backed up the live oak trees with parallel lines of concrete canopies. Designing for the topographic and climatic conditions of Houston, Hare & Hare produced a strong form civic space that has matured with the passage of time. Hare & Hare rehearsed aspects of the zoo concourse design in their design of Hermann Square in front of City Hall. Houston’s other avenues of live oak trees—Main Street, Rice University, North and South Boulevards—counter natural flatness with the construction of civic space and cooling shade. At the University of St. Thomas’s two-story exterior walkway, Philip Johnson installed an upper deck to alleviate what Lars Lerup calls Houston’s “flat planet” syndrome. And Isamu Noguchi’s Cullen Sculpture Garden of the Museum of Fine Arts uses  infrastructure, landforms, and planting to construct an architectural landscape that enables visitors to more intensely savor the phenomenal qualities of Houston. Like the Zoo Concourse, these sites persuasively shape space in Houston to construct distinct public places.

3. Project Row Houses. When artist Rick Lowe and his collaborators Michael Peranteau and Deborah Grotfeldt started the non-profit Project Row Houses in 1994 to acquire a block-and-a-half of abandoned rental cottages in the historically African-American Third Ward neighborhood, any prediction that this might become one of twenty-first century Houston’s foremost cultural landmarks would have seemed presumptuous. Yet inspiration, improvisation, and continuing hard work have enabled Lowe and his associates to take something very ordinary — tenant housing for working-class African-American families built in the segregated, lower-income, minority neighborhood of a Southern city — and radically transform perceptions of the cultural value of this site into something extraordinary, even prophetic. Lowe brought any artist’s sensibility to re-visioning the collective significance of these houses and the communal spaces they shape, which today are perceived not as ordinary but as archetypal. Lowe transformed the value of this complex by presenting it as a representative Houston place. Twenty years earlier architect Howard Barnstone accomplished something similar when he persuaded Dominique de Menil to paint the bungalows Menil Properties had acquired near the Rothko Chapel gray with white trim, giving an otherwise ordinary Montrose neighborhood a subtle and extraordinary new identity. The Orange Show, another grassroots non-profit, has followed suit with the opening of Smither Park. Project Row Houses represents a mythic Houston promise: if you have a compelling idea, it will be embraced.

4. Astrodome. James Gast, historian of the Astrodome, concedes that despite its boldness and historic singularity, the enclosed and air-conditioned Harris County Domed Stadium was a bare-bones construction, primarily because of the lean budget with which it was built. What makes the Astrodome a quintessential Houston place is its magnitude and audacity. The amazing explosion of interior space that visitors experience is still as powerful today as when the stadium opened in 1965. Rising in the middle of what was originally a flat, empty, 260-acre surface parking lot, the Astrodome was always blunt, unmediated, and unapologetic. It still is. The Astrodome’s acute sensation of spaciousness is a property of other mid-twentieth-century sites in Houston. The sanctuary of Temple Emanu El by the architects MacKie & Kamrath seems to expand spiritually because of its breadth and high-set illumination. The Rothko Chapel substitutes intimacy and intensity for the Astrodome’s outburst of enormity. Ludwig Mies van der Rohe’s Upper Brown Gallery in the Museum of Fine Art’s Caroline Wiess Law Building, when it is not subdivided by partitions, contains a stunning expanse of transparent, air-conditioned interior space that is Houstonian in its generosity and grandeur.

5. Brochstein Pavilion and Garden. The Brochstein Pavilion at Rice University and its landscape, the work of New York City architects Thomas Phifer & Associates and Houston landscape architects the Office of James Burnett, embody the practice of critical placemaking. Sited at a location that was formerly the antithesis of place — unbounded, undefined, and without character — the Brochstein Pavilion and the Crownover Courtyard imaginatively and meticulously filled a void with fullness. The pavilion is a steel-framed, glass-walled volume bracketed by terraces and gardens. These expand outward into a broader terrain to knit together a place where none previously existed. Like some of the other places I’ve chosen, the Brochstein Pavilion’s terraces and garden invite Houstonians to linger outdoors rather than simply look at it from inside the air-conditioning. In this respect, the pavilion resembles the promenade surrounding the Menil Collection as well as two more solemn sites, the Kagan-Rudy Chapel at Emanu El Memorial Park and the Proler Family Chapel at Beth Israel Cemetery, open-air structures in cemeteries, where mourners gather under cover but in the open-air to experience the passing of family and friends from life to death. What I find compelling about these places is how they amplify and condense subjective experiences of Houston-ness. Such experiences can be of mythical Houstons — the Astrodome certainly qualifies in this regard — but, critically, they provide phenomenal experiences that ground one’s sense of connection to Houston. In March 2016 the Cultural Landscape Foundation sponsored a symposium in Houston that examined new public place design, focusing on Buffalo Bayou Park, Discovery Green, Hermann Park, Emancipation Park, and projects still in the design stage. What landscape architect and historian Charles Birnbaum, executive director of the Cultural Landscape Foundation, discerned in his observations about Houston is the necessity of critical awareness in the construction of such places precisely because each one has the capacity to deepen and broaden public apprehension of what it means to live in Houston.