Every week, another forum about rebuilding a more resilient Houston after Hurricane Harvey. All the talking can seem like an end in itself. At the 2018 Gulf Coast Green conference, held at Rice University’s Moody Center for the Arts, actions big and small began to come into focus as architects sweat the details, sometimes in tense exchanges.

At the start of the conference Houston City Council Member David W. Robinson announced Complete the Community: A Housing and Urban Design Competition.

“Affordable housing is a key part of Houston’s resilience, and it’s been a subject of great interest to the architecture and design community for decades,” said Robinson. “This unique collaboration between the City of Houston and AIA Houston provides an opportunity to build on Mayor Sylvester Turner’s Complete Communities agenda by promoting ideas that elevate the design of our neighborhoods and infrastructure.” 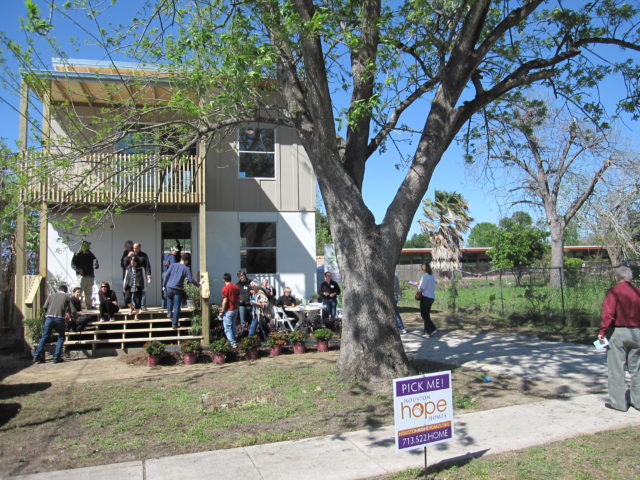 The competition seeks to elevate design in Houston’s affordable housing landscape by soliciting conceptual design entries for resilient single-family houses and one streetscape in the five pilot neighborhoods designated by Houston Mayor Sylvester Turner as Complete Communities. As Robinson noted, the Houston architectural and design community has pursued innovation in affordable single-family housing for many years through efforts like the 99K House Competition organized by Rice Design Alliance (publisher of Cite) and AIA Houston as well as the Disaster Recovery 2 program after Hurricane Ike led by bcWorkshop.

The Complete the Community sites were chosen by the City of Houston’s Housing Director, Tom McCasland, in coordination with the AIA Houston 2020 Visions Steering Committee. The housing part of the competition is for three-bedroom, 1,400-square-foot, context-sensitive houses in Acres Homes, Near Northside, Second Ward, and Third Ward. The urban design option seeks “tactical urbanism” proposals for a site in Gulfton that already has a concentration of housing, schools, places of worship, and public services but an infrastructure that is not suited to urban life, including the intersection where four-year-old Muhammad Ali Abdullah died when a car hit him on the first day of school nearly two years ago.

After Robinson’s announcement, Jim Blackburn gave the opening keynote address and once again did not hold back on calling our leaders to task for not fully disclosing the flood risks Houstonians face. Climate scientist Katharine Hayhoe ended the conference with her talk on how to speak about climate change with conservative audiences.

For the most part, however, Gulf Coast Green is a chance for architects to earn continuing education credits for digging into the details of mechanical systems, stormwater infrastructure, landscape planting, non-toxic materials, and other technical matters. This time, Harvey brought greater urgency to the well-worn topics. 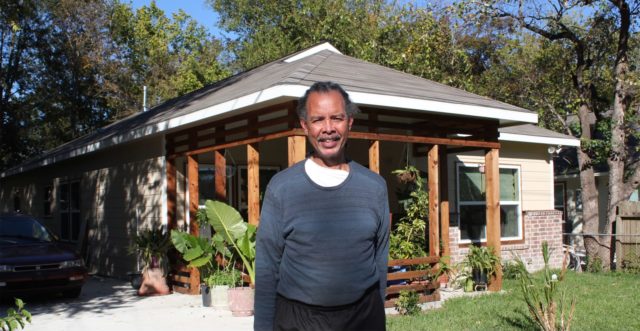 County Engineer John Blount gave a matter-of-fact accounting of the county’s response to the devastation of Hurricane Harvey including new policies requiring minimum elevations above the 500-year floodplain. While acknowledging the tremendous cost that some people will face meeting the new standards, he called for the adoption of techniques like helical pier foundation that could lower the cost of elevation. Blounts repeated claims that Harris County adopts policies and achieves resiliency goals faster than the City of Houston drew an interjection from Council Member Robinson calling for a collaborative tone and approach.

The most telling part of the conference for me came towards the end of Blount’s presentation. While reviewing sustainability policies and accomplishments, Blount casually noted that all new Harris County buildings will be LEED certified. Consider that in 2005, when the first Gulf Coast Green conference was held, Texas did not have a single LEED certified building. That no one in the audience batted an eye at the universal adoption of this standard by a conservative county government is a sign of a major shift, and a reason why the Gulf Coast Green conference is smaller than it once was.

When the Gulf Coast Green conferences were first organized by the Houston chapter of the American Institute of Architects (AIA), they were held at big conference venues and drew thousands of participants from beyond the design professions. The events had the energy of a movement. Sessions were packed.

Thirteen years later, the message that design and architecture have a central role to play in a sustainable future is so widely accepted that the zeal of those early conferences has given way to a nitty-gritty focus on implementation. LEED certification, and its many iterations, is one of many frameworks. Low Impact Development (LID) standards encourage storage and filtration of stormwater with tools such as bioswales and minimizing impervious cover. SITES is a framework for protecting ecosystems and enhancing climate regulation, carbon storage, and flood mitigation. The WELL building standard encourages health and well-being. RELi (pronounced “rely”) is about buildings and communities that are “shock resistant, healthy, adaptable, and regenerative through a combination of diversity, foresight, and the capacity for self-organization and learning.” 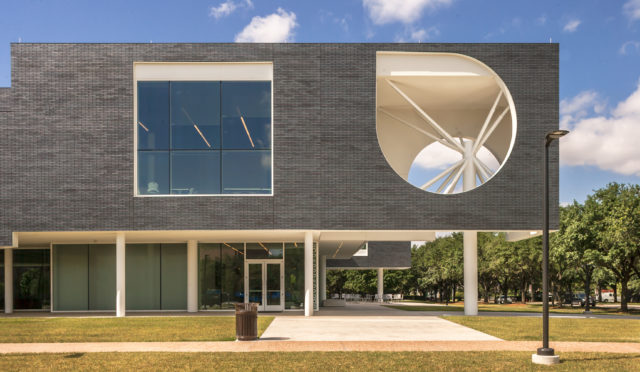 This year, the small conference brought an intensity to the Moody Center while a new art installation was underway in the main gallery. The conference rooms and various ancillary spaces were activated by urgent conversations about reducing wasted water, improving indoor air quality, and designing affordable housing under more stringent regulations.

“This was a great example of what Gulf Coast Green is about,” said Colley Hodges, a member of the planning committee and chair of the conference in 2017. “The conference has always brought together important voices on topics especially relevant to our part of the country. The conversations that result aren’t always easy to have, but it’s extremely important that they take place.”

If Houston emerges from Harvey a more resilient region, it will have to do, in part, with the calls to action and conversations that take place at Gulf Coast Green and the near weekly forums other groups have convened, in formal sessions and out in the hallways, both big ideas and technical details, as when Blount and Robinson traded ideas for ways the city and county can collaborate on flood mitigation standards.