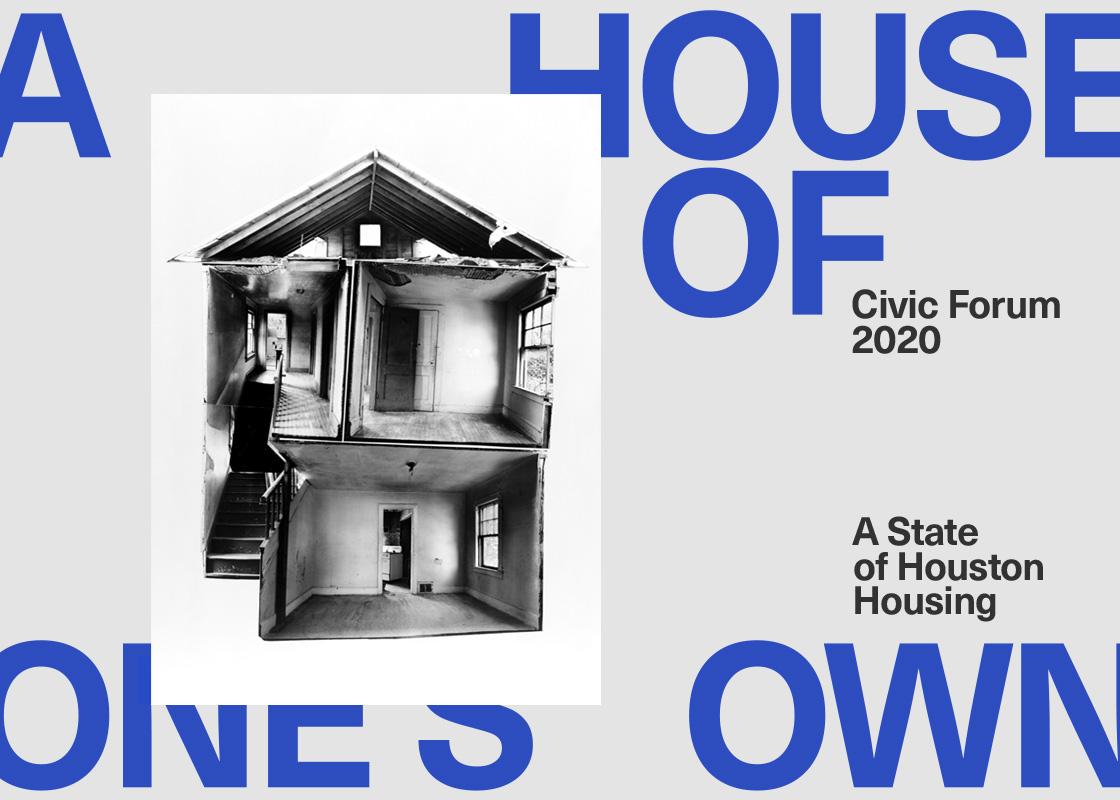 The panel addressed major issues and showcased how much work there is to be done. Collected below are some responses to the event from attendees.

A video of the Civic Forum is available here.

Kyle Shelton, Deputy Director, Kinder Institute for Urban Research: I was really struck by the clear need to connect and empower residents with housing decisions. We talk a lot about the buildings and the hard design elements of the housing problem. We too rarely think and act on how to more tangibly bring residents into the conversations about how to build neighborhoods and homes. I thought the discussion was a fairly clear call to do both—whether that is in the form of the Housing Dept. giving people choices about whether they want to enter into a community land trust or Avenue and other groups working through different approaches to design informed by community needs and preferences. I sort of summarized that as building communities with folks, not for them.

The Civic Forum pointed to the necessity for immense and longterm action in the housing sector. The speakers, along with the anecdotes and data they shared, highlighted how essential it is that we work to develop additional affordable, safe homes for residents of Harris County and Houston. Central to that effort, though, should also be work to ensure that residents and communities are meaningful participants in the conversation and decisions about what to build and where. Efforts to improve the system and provide housing for all are going to need to be combined work from multiple angles.

Inclusive planning is a critical step. The Kinder Institute is leading the Harris County Housing Study through the campaign entitled My Home is Here. The goal of this work is to bring the voices and needs of residents directly into the 10-year housing plan for Harris County. Even with COVID challenging traditional forms of community engagement, our online survey has received 6,000 responses to date and we hope to collect many thousands more before the survey closes in March.

On the building side, collaboration is going to be just as essential. Public agencies, such as the Houston Housing and Community Development Department and non-profits such as Avenue CDC, will need to continue their own programs, but also collaborate with each other and with private developers if we hope to meaningfully close housing gaps. Projects and engagement can also go hand-in-hand as the work of Rice Architecture professors Danny Samuels and Jesús Vassallo make clear. In the case of Samuel’s Construct effort, led with Andrew Colopy, all of its projects have been developed in close step with community input. This has led to really impactful projects that meet key needs beyond simply a roof over one’s head.

Similarly, we are partnering with Jesús Vassallo to form the Affordable Housing Lab. This group aims to lead to project outputs that are neighborhood-inspired, fit the context, and meet the needs of residents. We face a long, uphill effort to adequately and safely house all Houstonians. It’s going to take a wide range of efforts to chip away at that. The Civic Forum highlighted many of the actors who need to be involved in that work.

Albert Pope, Gus Wortham Sessions Professor, Rice Architecture: It was nice to see two sides of the housing problem broached, the strategic and the tactical.

Assata Richards took a strategic approach where housing’s systematic and structural problems are taken up. The strategy here is to address the misplaced notion of housing as a commodity. Like measuring our well-being with GDP, it produces a perverse set of metrics by which to judge failure or success. Before any single housing project can be effective, we have to change the way that we think about housing.

Tom McCasland and Mary Lawler, on the other hand, took a tactical approach. What I mean is that they have skillfully employed the available means to produce the best results possible under current circumstances. This approach resulted in a series impressive projects that push the housing agenda forward in the best way possible—with tangible results. A tactical approach takes up the indescribably difficult task of actually getting things built. Proven success not only enhances the cause, it alleviates the suffering that comes from being denied a basic human need.

Those who would affirm or disparage either approach miss the point. You cannot have tactics without strategies or strategies without tactics. Strategies without tactics are just academic exercises that do little to move the issue forward. Tactics without strategies, on the other hand, have little cumulative effect. The impact of the single project remains isolated, unable to address what is a systematic problem. Since none of the four presenters were designers, the forum provided some good background information but it did not address how that information relates to design. This is unfortunate in that the strategic role of design is left unexplored.

Andrew Colopy; Assistant Professor, Rice Architecture; Co-Director, Construct; Partner, Creative Director, Cobalt Office: I'm reminded of how inconsequential architecture and design are without parallel efforts in public policy. This should clearly be a call to architects to be more engaged in policy making (and thinking), as I believe the forum made blatantly clear.

As it happens, policy is what Construct and my Totalization studio have been focusing on this past semester, so I'm also inclined to be thinking about it. I'm reminded too of the political materialism arguments of the early 2000s, especially with regard to Director McCasland's insistence that affordable housing shouldn't be recognizable as such. This is an understandable position given the legacy of public housing in the US, but, in my opinion, is overly deferential to market-based solutions that operate at a scale where finance, labor, and material markets dwarf architectural interests. Public policy could better support those interests, as well as environmental ones—which should be just as much at the forefront of our discussion—in a manner that architectural practice, at least as we know it, simply can't.

Larry Lander, Principal, PDR: The event was timely and relevant, though perhaps those words are too soft or hackneyed. In the midst of the unmitigated disaster of a global pandemic which has accelerated an historic downturn in an industry that is arguably the most important to our region’s vitality, it is critical to have a better understanding of the components that make Houston successful and vibrant for all citizens.  Overlay that with an election, near-daily reminders that decisions in Austin and Washington really affect us, and an awakening through the summer that fundamental parts of our system work against the chance for large swaths of our community to be successful, let alone thrive—well, we should all be learning and pulling in the same direction if Houston is going to lead in this century, or else wither.

I appreciated the breadth of perspective. We heard how good design, in its simplest definition, is a critical thing; how real estate development—a thread that’s run through Houston’s whole history—plays an outsized role; and how politics are inextricably bound up in all of it. The panel reminded me that, for all the seemingly intractable Gordian Knots, there still remains great enthusiasm and energy. Assata’s close made it personal: In the end, it’s about people. All of us are in this together.

I don’t know exactly what next steps might be—but I’m sure most of us dialed in were left with a I-want-to-know-more moment. Learning more about the people affected makes it personal—that’s always good (re: Assata’s energy) and I think one of the panelists made that point exactly.  As an architect, of course I’m impressed with the attention to “what it looks like.”

Landscape plays a role in this too. Trees and parks affect the quality of life for all citizens. Desirable neighborhoods have trees and parks, and people will go to great lengths to search them out. Hotter summers and higher temperatures have accelerated attention around this in our urban centers. Perhaps some of our landscape architecture members could speak to this.

Another angle is the role and situation in our suburbs. Much has been made of how the suburbs are something quite different from the image some in Washington believe. We are long removed from white stay-at-home moms wearing pearls while they vacuum the house. We’re even getting a new president, in no small part because some people didn’t understand that. How are these same issues being addressed beyond our city limits in the county and the whole metro area? Speaking for a friend, of course, we can often tend to have a very Inside-The-Loop perspective that may not always serve us well.

I tend to search for bigger themes, though, and I’m always heartened to see attention focused on what will make Houston prosperous in the 21st century. I know there is great hand-wringing around why we were not considered seriously for Amazon HQ2. I saw first-hand the power play between Rice, the University of Houston, and the University of Texas over UT’s foray into developing a Houston accelerator hub. I am quite familiar with The Ion and the herculean efforts to make that part of Midtown something new and different. I read the Kinder Institute's report about how important public education is to our increasingly diverse population. Indeed, my very livelihood depends on companies believing Houston’s future is intertwined with their own success. It’s all tied up together.

Shawn Lutz, Founder, SML/A; Faculty, Texas A&M University: The virtual panel discussion was driven by the important questioning of systemic norms that we ought to face with new attention. These are norms that are too far ingrained within society, which has led to an overdue global call for enough is enough. This set of panelist provided a glimpse of hope, with lots of work in front of many institutions to inform and de-normalize this historic stigma.

Director Tom McCasland mentioned the connection between affordable housing and what it looks like. Affordable housing, historically, has been asked to look ugly, as if ugly means affordable. Through many experiences as a designer, I have faced this same aesthetic barrier. The enlightened moments happen when driving along a neighborhood street and not being able to see any differences between affordable and non-affordable housing. This moment provides the inspiration to change business-as-usual operations.

As moderator, Jesús Vassallo provided the voice of the academic and practitioner. This means he works with others to change stigmatized views through his work—one project, one collaboration at a time. Assata Richards and Lori Pampilo Harris both questioned the historic past and oriented us towards an important future, as so many minds are eager for change at every level in our society. The design of housing in our our neighborhoods is a fulfilling way to make a better tomorrow.

These conversations, prompted by RDA, are a significant start towards elevating the conversation. We need more of these broad audiences to spread the word.