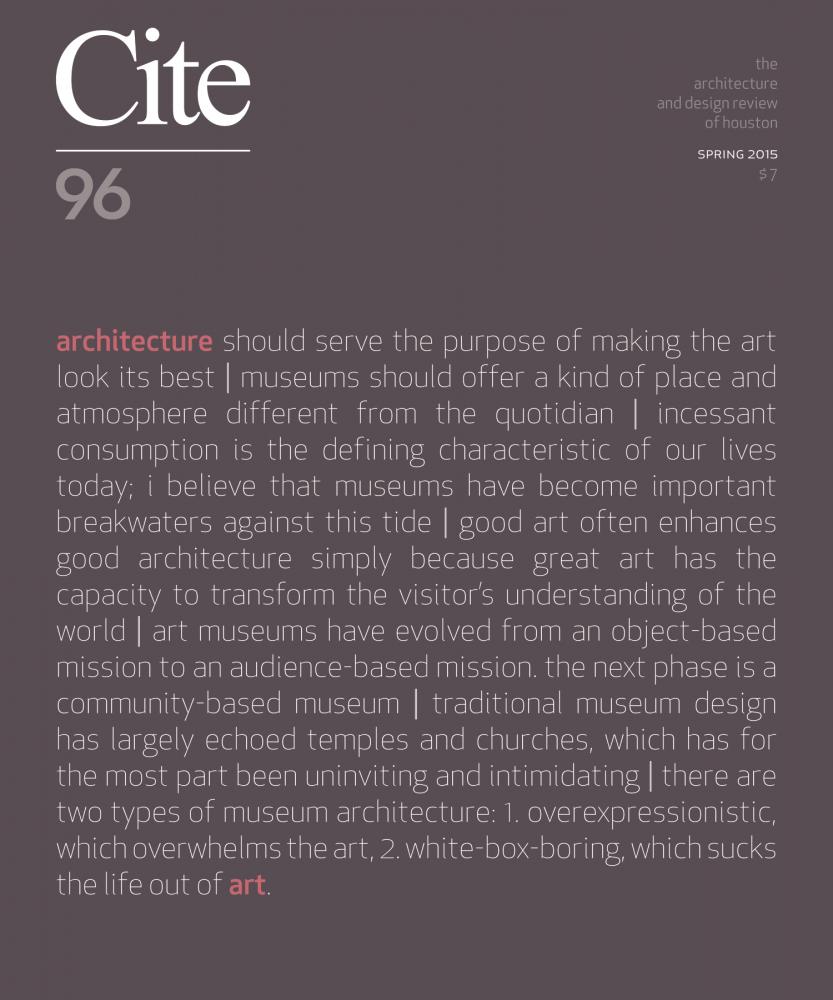 Museums may be our best patrons of architecture, allowing and even encouraging experimentation while demanding more exacting design.

Cite 96 looks at four art spaces—one realized, one ongoing, and two on the boards—one in Fort Worth and three in Houston. The four are the recently completed Piano Pavilion for the Kimbell Art Museum, the projects for the neighbor- hood and buildings of the Menil Collection, the ever-evolving community of Project Row Houses, and the designs underway for the campus and buildings of The Museum of Fine Arts, Houston (MFAH).

All of these institutions, varied in size, structure, and mission, are ambitious and provide a range of ideas and approaches for art spaces. They also offer an extraordinary collection of architecture that is well worth study and discussion. With that in mind, Raj Mankad and I invited three writers (Christopher Hawthorne from Los Angeles, Walter Hood from Berkeley, and David Heymann from Austin) to examine and analyze the three projects in Houston mentioned above. I had the pleasure of reviewing the Kimbell pavilion in Fort Worth.

We also felt Cite 96 should be an opportunity to hear from those who are most involved in orchestrating these projects: the directors of the various institutions—Eric Lee, Josef Helfenstein, Linda Shearer, and Gary Tinterow—and their architects—Renzo Piano, David Chipperfield, Johnston Marklee, Danny Samuels and Nonya Grenader, and Steven Holl. We sent out short and virtually identical questionnaires related to culture, art, architecture, and context to those concerned and had replies from all. The responses are illuminating and we sincerely thank everyone for participating. It is also of note that the Houston architectural firm Kendall/Heaton is the associate architect for the current MFAH project and the Kimbell Piano Pavilion as well as the earlier MFAH Beck Building and the Modern Art Museum of Fort Worth.

It would seem that in this second decade of the twenty-first century—not quite a hundred years since the very first realization of a stand-alone museum building in Texas—we are seeing an unprecedented flurry of important museum projects. In reality, art museums have been steadily realized in Houston and else- where around the state over the last century with bursts of activity from time to time. This current activity might be comparable to that short period between 1971 and 1974 that saw the openings of the Rothko Chapel, the current Contemporary Arts Museum Houston building, the Kimbell Art Museum, and Mies van der Rohe’s Brown Pavilion. Likewise, Project Row Houses, the Cy Twombly Gallery, and the Byzantine Fresco Chapel all opened between 1993 and 1997. The MFAH Beck Building, the current Modern Art Museum of Fort Worth building, and the Nasher Sculpture Center in Dallas all opened between 2000 and 2003. All of these projects were ambitious, and they have been met with professional and public enthusiasm. They have sometimes been met with uproar, however, when modifi- cations are seen to compromise what exists. With a strong legacy of acclaimed art spaces, the ante has been upped for new ones. Texan art museums possess restraint, however. They appear immune to the temptations of a more flamboyant architecture. Sobriety mixed with innovation is characteristic of the projects. As has been pointed out within the issue, high standards have been set, there is now a history to honor, and there is a sense that the world is watching for what’s next.

In the writings and interviews that follow, museums are described as utopias as well as heterotopias—as a respite from everyday life and conversely as an engagement with everyday life. The Texas urban context is omnipresent in the discussion of all the projects, as is the relationship between density and space— between architecture and nature. It is understood that art is the subject of the projects, but this round of museum designs prioritizes public space, social spaces, civic space, and shared space. They should provide inspiration and offer a different way to see and live in the world.

...and all of this under the intensely sunny, sometimes rainy, big Texas sky.

MFAH: An Interview with Gary Tinterow and Steven Holl