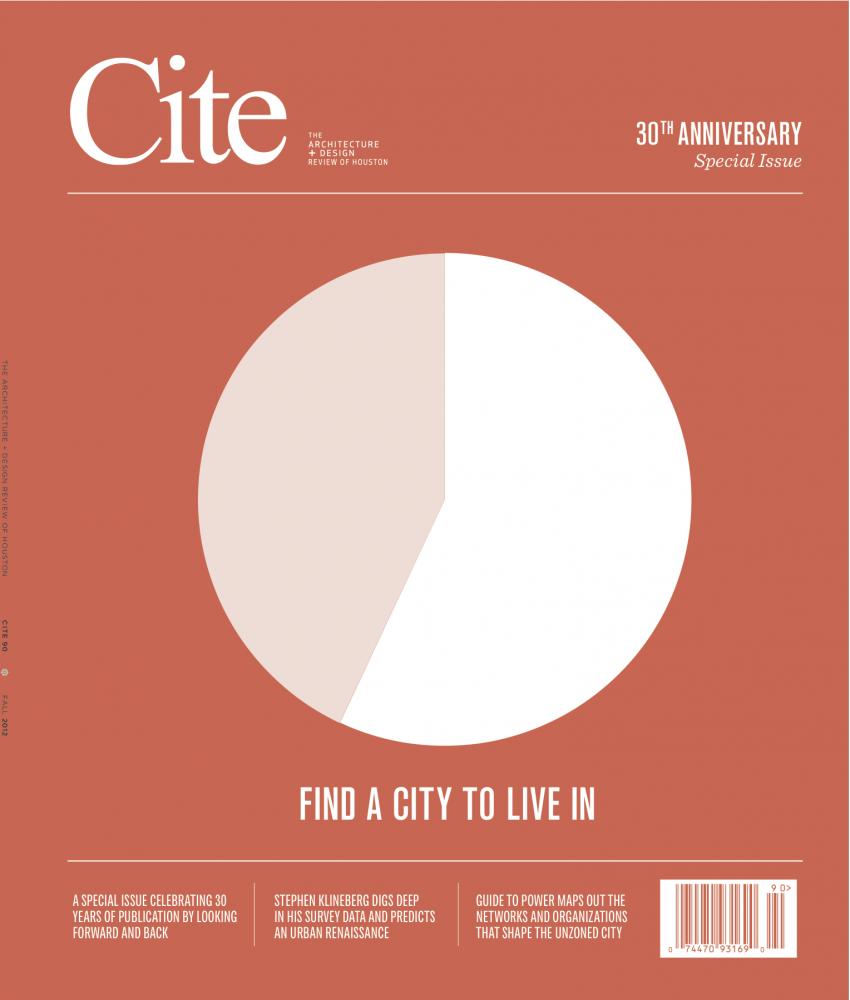 Cite was launched 30 years ago just as a long run of boom years for Houston ended and a more complex global city was bubbling up. Ninety issues and over 1,000 articles later, we arrive at this 30th anniversary issue. Over the years, the magazine has served the function of preserving the historical memory of Houston, promoting speculation about its future, and acting as its design conscience. In a city with a highly informal approach to urbanism, Cite has allowed architects, planners, and designers a public forum in which to ask “what if” questions. It frequently proposes a kind of alternate history for the city by imagining Houston in three tenses: past, present, and future.

In this issue, we examine Houston by looking back and projecting forward 30 years. Bruce Webb excavates sundry “fabrications” from the archive. Barry Moore and Raj Mankad focus on 1972, when the community and perspective that gave rise to Cite first formed. Pat Lopez presents a stunning what-if scenario in a hand-drawn rendering. Steven Klineberg looks at the rapidly changing demographic landscape of the city. More and more people seem to be interested in a model of walkable urbanism, which has for so long been anathema in Houston. The photographer Alex Maclean revisits his iconic 1976 photograph of downtown Houston and finds it changed for the better. Architects Matt Johnson and Monica Sa- vino map the informal networks of power and influence at work in Hous- ton’s myriad public and public/private agencies devoted to economic and urban planning, the environment, and the arts. (What’s missing is the immense power that private companies have had to influence the city’s development. But that will have to wait for a later issue.) Christof Spieler examines the pros and cons of the METRO referendum that passed, and Jorge Galván illustrates the potential of expanding the Bayou Greenways through Proposition B.

In addition to the specific aims of the articles, this issue also serves to restate the importance of Cite in a rapidly growing city. Here, we want to emphasize that it is both engaged in important issues, and could do better. Cite has the potential to more forcefully advocate for a vision of Houston’s future. If Alex Maclean was able to return to Houston after thirty years to find it denser, greener, and more vital, our hope is that when we invite him back for the 60th anniversary issue of Cite, these changes will be exponential, and that Cite will have played a role in this future evolution. We predict that Houston will be not only a global city, but a more effective, beautiful, and livable one.

Cite and the City: Fabrications of Houston's Past, Present, and Future

More Than a Guide Book: A City Without Precedent Calls for an Unprecedented Guide

Mainstreaming the Militants: On the Founding of the Rice Design Alliance

Parallel Future: What If the Price of Oil Hadn't Crashed?

A Guide to Power: Houston Networks

A Collection of Obsolete Architectural Instruments: Addometer, Rangematic, and Planimeter

Is Houston About to Experience an "Urban Renaissance?": Findings from the Kinder Houston Area Survey (1995-2012)

The Futures of Density: A Review Essay on Triumph of the City, Arrival City, and The Great Inversion