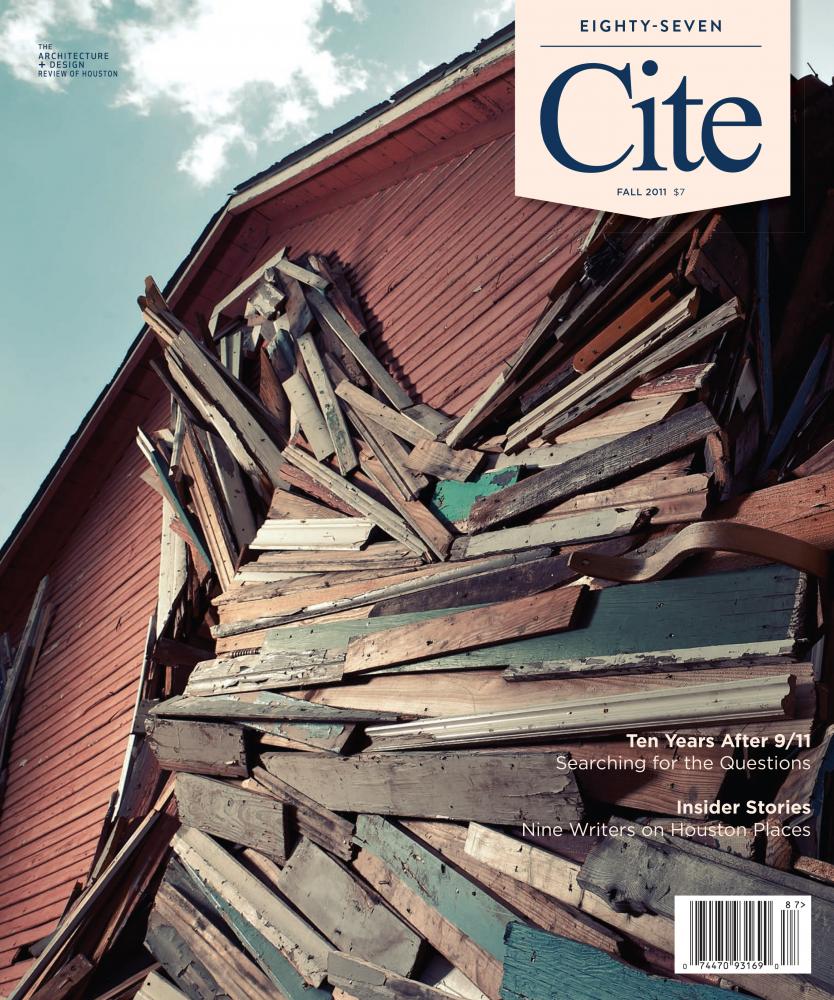 The cover of this issue shows Dan Havel and Dean Ruck’s latest work, Fifth Ward Jam. Fashioned out of an old house, it looks like Houston’s culture—heterogeneous, exploded, twisted, improvised, and strangely beautiful. The editorial team was drawn to Fifth Ward Jam because of the way the splintered wood seems to focus a terrifying energy, like a plane crashed into the house and left a stage in the crater.

This issue of Cite features two ostensibly separate and unrelated sections. Guest editors Terrence Doody and Rich Levy challenged Cite and our readers to reflect on the tenth anniversary of the September 11, 2001 attacks well after the flurry of television coverage has passed. The second section emerged from an effort led by Jane Creighton, Pat Jasper, and Carl Lindahl to commission writers who have insider stories about Houston places. No connection, right?

Fifth Ward Jam gives form to a connection we hesitatingly voiced early on in the process. Trauma after trauma—September 11, the end- less wars, flooding, hurricanes, drought, and economic collapse—have marked the last ten years. Our domestic politics seem more splintered than ever. And yet, this issue of Cite demonstrates that the traumas have been countered by a renewed search for community, history, and individual worth.

The afternoon of October 1, Fifth Ward Jam officially opened with a little music festival. Prince Jabo and Texas Johnny Brown played in the zydeco and blues styles that developed right there on Lyons Avenue. The crowd was a wondrous mix of ethnicities. I knew about two dozen of the artists and writers. As for the locals from the Fifth Ward, I did not know a soul. Class and race differences are persistent and real, but the structure of Fifth Ward Jam suggests that communication is still possible. There is a potential “we” to Houston.

During the artists’ talk, Dean Ruck emphasized that Fifth Ward Jam now belongs to the Fifth Ward and that he hoped the community would take ownership of it. Rappers, zydeco bands, political debaters jam onward and forward. However, no Discovery Green-style public/private partnership will subsidize and schedule regular activity. Will Fifth Ward residents come to love and use an art work that resembles the abandoned houses next door?

In his contribution, Carl Lindahl, a scholar of Louisiana folk culture, considers the vernacular architecture of Frenchtown, a locale close by Fifth Ward Jam. The resilience of Frenchtown families and their commitment to their architecture is a powerful reminder that placemaking often emerges without big funders or institutions through bottom-up, creative engagement with tradition and history.

In their contributions, Terrence Doody and Rich Levy note a post-9/11 search not just for answers, but also for a way to frame the right questions. Levy takes solace in his son “tuning in to Al Jazeera” on his phone. Indeed, in less time than it took us to put together this issue, multiple Arab revolutions have inspired the leaderless Occupy Wall Street movement, arguably capturing the nation’s attention more than the excrutiatingly masterplanned rebuilding of Ground Zero down the street.

As far-flung and ununified an issue as this one is, a theme of bottom- up resilience runs through it all. The writing was so strong throughout that we leave the reader to imagine the scenes with only a gentle and skillful nudge from illustrator John Earles. Enjoy and let us know what you think.

The Pictures I Could Not Take: We Have to be Able to Imagine What We Know

The Pictures I Had to Take: Because I Knew Words Would Fail Me

9/11, Houston, and Salman Rushdie: On the Other Side of Fury

Placemaking from the Bottom Up: An Introduction to Writing & C/Siting Houston

Exile and Live Oaks: Stories Whispered from the Trees

The Old Sixth Ward Historic District: Or As We Used to Call it, Del Sesto

East Side Ruins: Delighting in Unscripted Spaces Along Buffalo Bayou

Sugarhill Recording Studios: The Story of a House

Art and Activism: Projects of John and Dominique de Menil