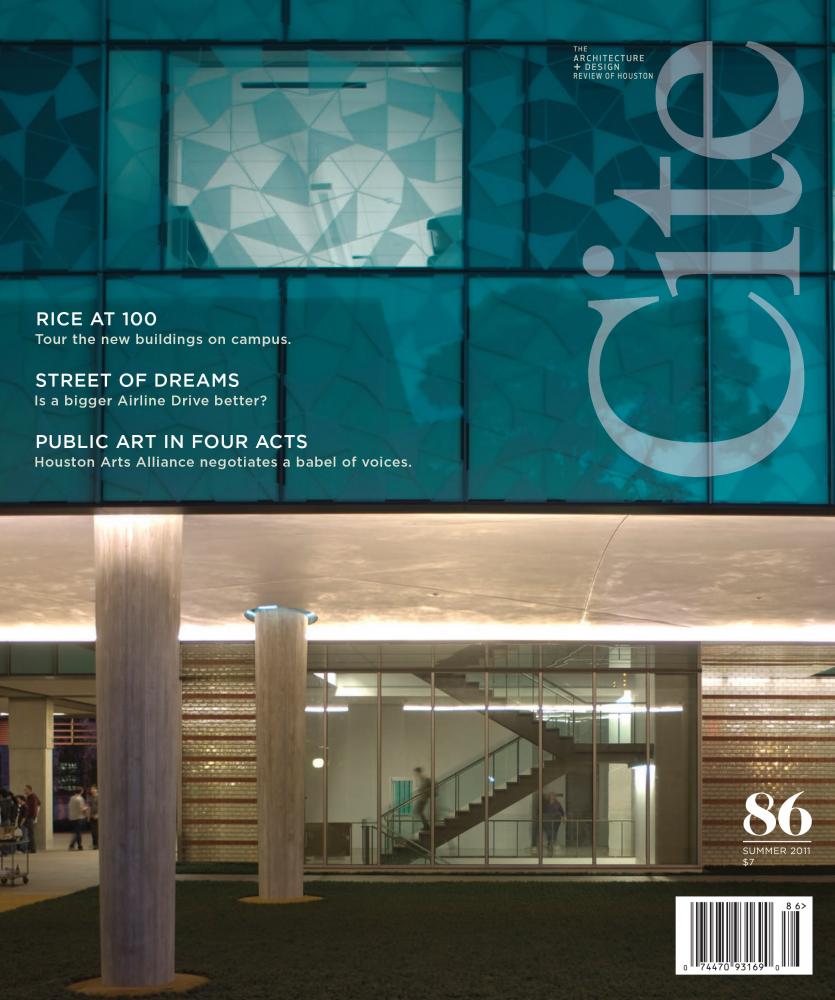 Houston is not only the largest American city without zoning, it is also the only sizable American city without a comprehensive plan. This does not mean that there are no planning efforts going on in Houston. There are plenty of well-intentioned master plans for different parts of town, but these tend to be limited to relatively small areas, or focused on specific functions, such as traffic or public art. For years, local governments have been eager to delegate planning functions to any private group willing to pick up the bill – a practice that puts less affluent neighborhoods at a clear disadvantage.

Articles in this issue of Cite explore different aspects of Houston-style planning. Starting with an architectural review of the venerable Rice University campus written, upon the occasion of the university’s centennial, by Mark Cottle and Sabir Khan, two Rice architecture alumni who now live in Atlanta. They trace the history of the campus from the coastal plains, which defined Rice’s site a hundred years ago, to the remarkable master plan by Cram, Goodhue & Ferguson, and its evolution in the hands of a roster of architects who have shaped its spaces and buildings to this day. Cottle and Khan attempt to explain how the most successful buildings on campus are those that understand the conceptual and spatial lessons of the original plan, rather than rely on superficial stylistic mimicry.

In a counterpoint to Rice’s grand scheme, Susan Rogers evaluates the plans to “update” Airline Drive, a deteriorating two-lane commercial street at the heart of the city’s bustling wholesale produce district. She challenges the City of Houston to reconsider its traffic-centric approach to planning and replace aging thoroughfares throughout the city with more community-appropriate plans to make Houston a better place to work and live.

Raj Mankad evaluates the nearly completed widening of Sims Bayou and considers the role a coalition of residents played in improving the design.

WHY IT NEVER GETS DARK IN HOUSTON: Adventures in Late Night Dog Walking

Sustainability: An Interview with Bina Agarwal

One Hundred Years of Rice: Contemporary Responses to Tradition

Buried Concrete: Is the Re-sculpting of Sims Bayou a Cause for Celebration?

Street of Dreams: Is a Bigger Airline a Better Airline?

Review: Architecture as Revolution: Episodes in the History of Modern Mexico