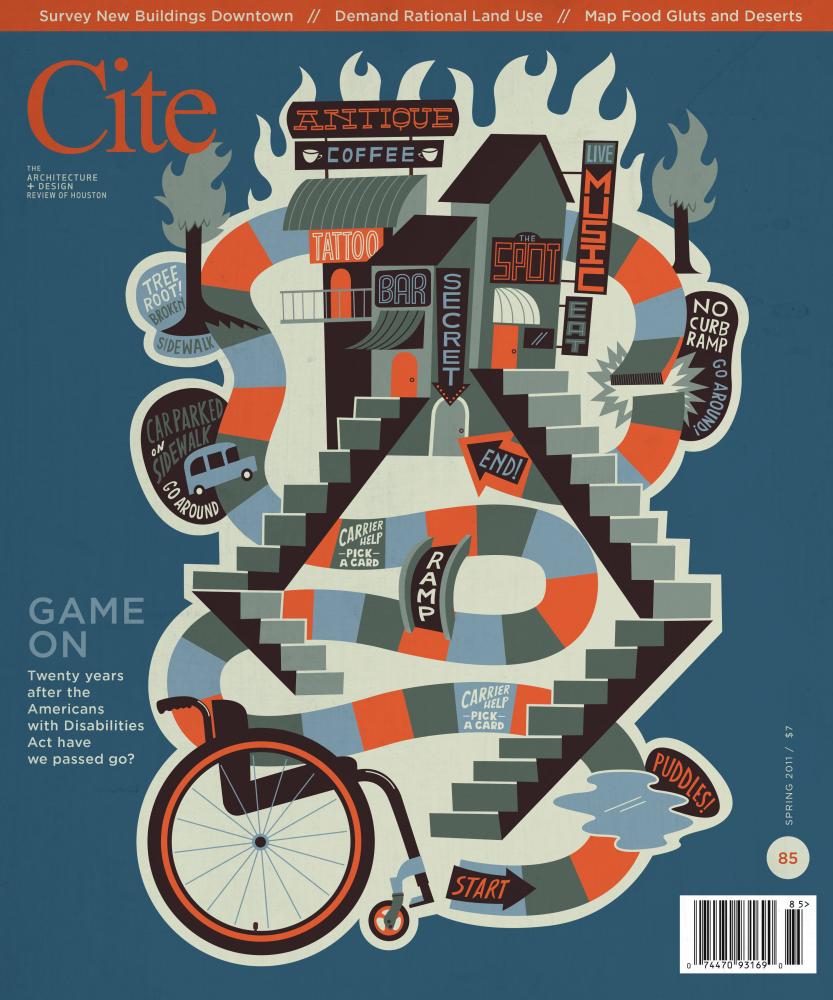 This issue of Cite features articles on a broad range of topics. In all the pieces, the unpredictable development patterns of Houston play a role. The lack of planning and zoning here, or the “ad hoc” form of zoning as John Mixon describes it in his contribution, leads to innumerable challenges for individuals, communities, and designers. The vagaries of Houston’s growth at times feels like a game, fun and entertaining, grueling and shameless, rewarding some and relegating others to deprivation. Guest editors; Julia Mandell and Susan Rogers sought to highlight proactive responses and efforts to take a stand.

Kelly Moore navigates Houston in a wheelchair. She explores gaps and back alleys on her wheels that are “large, curvy hips that sometimes shimmy and sometimes coast, always whirring beneath [her] circling arms.” Her beautifully written essay goes well beyond documenting the obstacles she faces, such as steps and broken sidewalks. She does more than consider the Americans with Disabilities Act (ADA) twenty years after its passage. Moore’s insider-outsider perspective gives all of us a chance to see our culture, our bodies, and our city anew.

The anchor article in the issue is a survey of new downtown buildings. The vast stretches of surface parking lots seem to be filling in, though the process is halting— a two steps forward one step back dance that can be hard to keep faith in. Is the center of the city beginning to come back to life? Cite has a special role, as the only consistent forum on architecture in Houston, to provide an independent look. Writer and artist Kelly Klaasmeyer takes on that challenge.

A house designed by Ronnie Self for himself and his partner is a pleasure to consider. Though the house is perched on the edge of the canyon-like interchange of highways 59 and 288 and offers sweeping views of the city, reviewer Joe Self (of no relation to Ronnie) does not allow himself to be swept away by the context. He keeps his sights on the rigorous plan.

Susan Rogers and Maria Oran present a data-rich analysis of the distribution of grocery stores in Houston, revealing food deserts and gluts. The information juxtaposes protests against new stores in affluent areas with the complete lack of access to fresh foods in other neighborhoods. The question of food, community, and justice returns in the final piece, an excerpt of a rousing speech given by Laura Spanjian.

The aim of Cite is to raise the level of debate and standards of Houston by bringing sustained attention to the challenges we face. We do not imagine all readers will agree with the positions taken by the writers. Rather, we hope this issue will serve as a starting point for discussion and action.

Sidewalks, Steps, and Labyrinths: Navigating Houston in a Wheelchair

An Honest Look at Downtown: The Center of Houston Has Come A Long Way

Glass House on a Concrete Canyon: Highway 288 Serves as an Unlikely Front Yard

Zone-ing Around: Our City’s Ad System of Zoning is No Game

Taking Houston to the Cutting Edge of the Local Food Movement