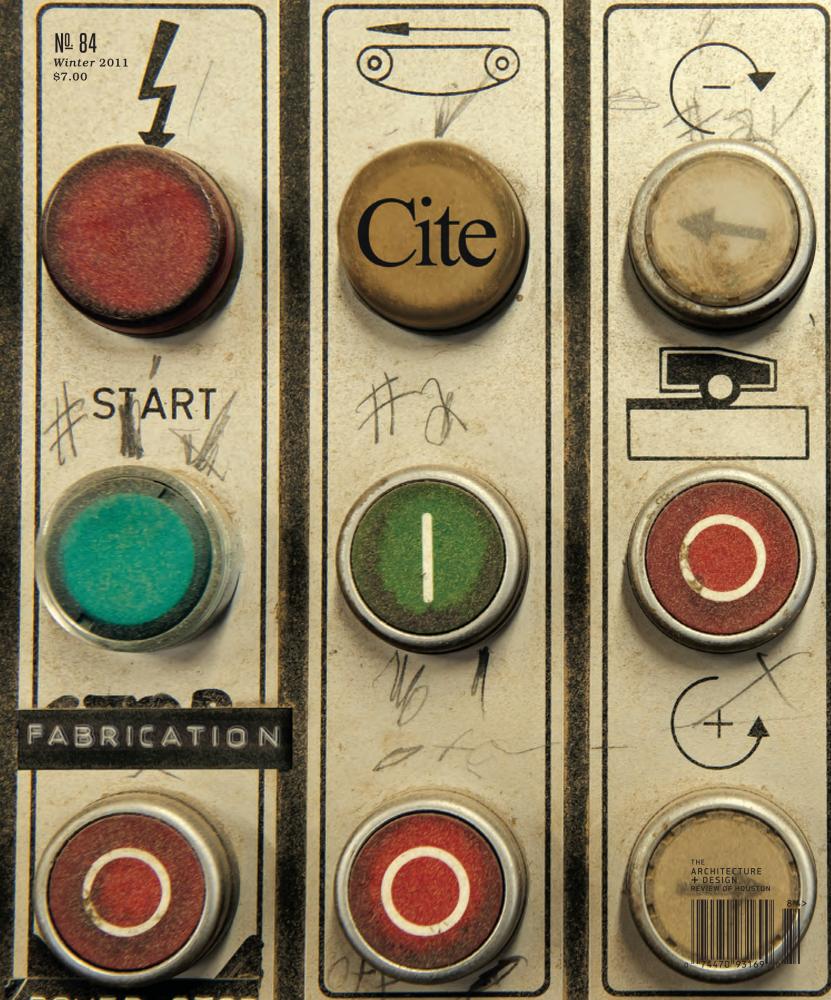 Cite 84 was guest edited by José Solís. The following letter is by Raj Mankad:

The Houston region was named the nation’s number one job creator for the past ﬁve years in a ranking by the U.S. Bureau of Labor Statistics. According to Manufacturing News, Houston has the largest manufacturing workforce in the nation and is, in another measure, the home to the highest level of entrepreneurial activity out of the 15 largest cities.

Those are great numbers but what exactly do they mean at a granular level. Who are these people making things in a US city? What are they making? Why does industry thrive here at a time when many worry the United States has lost its way economically? Guest editor José Solís and I did not commission experts to ﬁnd the answers. Instead, we sought out wildly curious people to explore.

We sent Kelly Klaasmeyer, an art critic, to half a dozen sites stretching from Katy to Telephone Road, and from Sugarland to Tomball. We sent ﬁction writers to Brochsteins and St. Joe Brick Works. We sent a poet to interview a young bicycle designer and fabricator. Jack Thompson, who made his name shooting Houston rappers (with a camera), took on the photography.

The result is—I’m not afraid to say it—inspiring. When you are done with this issue, you will want to jump off your couch and start making
stuff. The vitality of the ﬁrms and people proﬁled here is infectious. Professors from MIT, Rice, and the University of Houston do round out the explorations with their expertise. They challenge us to better take advantage of fabricators all around us, hidden in plain sight, to create a more beautiful, sustainable, and socially responsible future.

We tried to take on that challenge with this issue’s cover. The material was produced by Houston’s own Valéron Strength Films at their facility off Hempstead Road. The process starts with polyethylene resin pellets brought by railcars from a local petrochemical plant. The resin is blown into a tube three stories high by extruders that look like jet engines. The plastic cools into a ﬁlm and collapses. The real ingenuity comes in the next two steps. The ﬁlm is stretched to line up the polymer molecules in one direction. Then, using a spiral cut to unravel the tube, Valéron layers the material at 45-degree angles and laminates it all together. The result is an untearable material that can be found in ﬂashing tapes in Singapore, cotton tags in Australia, and explosives packaging in Costa Rica.

We learned about Valéron with the help of New York-based Material ConneXion. How many other innovative fabricators exist right under our noses that could help us push our creativity? Special issues like this only scratch the surface. So please read and pass this especially sturdy issue around until we get a vibrant conversation going.

Still Made in America: Houston is a High-Tech Hotbed for Industry and Fabrication

The Business of Craft: The Creative Hurdles and Triumphs of the Independent Fabricator

Timelessness is a Veneer: New Technologies and Management Transform Brochsteins

Visualize-Simulate-Fabricate: A Look at Where Building Information Modeling Could Take Us

Boots and the Fabrication of Houston's Identity